I keep going farther back in time* and just acquired my first handgonne barrel from a forum member. It's a small one. I'm gathering the components to put it together for the range and got thinking about the tiller pole. I've read they were usually around 4'. Are there instances of longer or shorter? How short may they have been? Tow wadding to keep the ball in place? My intention is to add a serpentine lever for the match to make it a bit easier to fire.

Though I've perused this part of the forums pretty far back there's still a lot I wonder about. Any info, history, suggestions, etc. is more than welcome. Thanks!

(*Well, sorta... I have made self bows and slings and even an atlatl)

Congrats on your first Handgonne! Four feet is about right. I usually can bareball it if the fit is tight. Some tow in front wouldn't hurt if you aren't sure.

I use my left hand for absorbing recoil. If I'm using a safety fuse, I will have enough time to bring in my right hand to fine tune the aiming when using the over the shoulder method. It does help with accuracy!

Thanks much for your reply. I'm curious, why do you think they used such long tillers?

I wish I knew for certain as well. I'd hazard a guess that the first Handgonnes were also used as makeshift clubs in an emergency. Especially since gunpowder weapons were new back then and they really didn't know how to properly design one until some experimentation over the decades.
T

Maybe the long tiller made a handgonne useful as a pike if a plug type bayonet was added in the field?

Treestalker said:
Maybe the long tiller made a handgonne useful as a pike if a plug type bayonet was added in the field?
Click to expand...

Swords were the order of the day , bayonets were still in the future , If I was to fire a handgonne back in a time when metallurgy was a bit hit and miss , especially with gonne barrels , I would want the thing as far away from my body as possible.

I would opine that besides archers & crossbowmen, more of a longer distance battle … that for early days ‘close quarters combat’ (CQB), pikes and pikeman ruled the battlefield.

One would also carry a sword, but you could keep a sword-bearing opponent well away from you. Plus the pikes could be used to stop or slow down a calvary charge.

At the battle of Agincourt (pre-firearms), once the archers had spent their arrows and it became a CQB battle, they used war hammers & small swords, especially to kill off dismounted knights in full armor.

But getting back to early hand gonnes, if you look at this picture here, tiller gonnes where equipped with a metal spike on the other end so you could turn it around and have some type of long weapon in your hands. 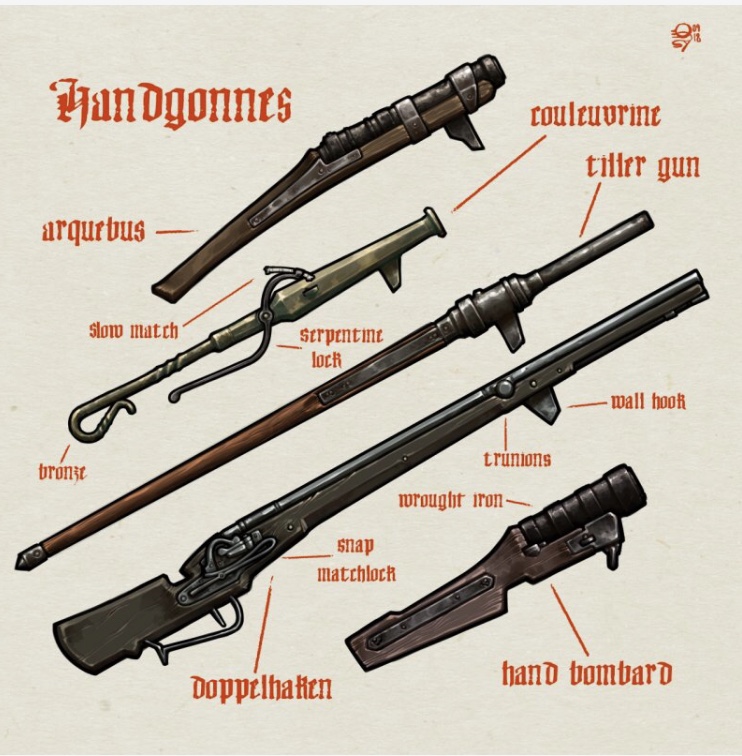 I seem to recall canon at Cressy maybe it was at Poitier both pre dating Agincourt . But none at Agincourt but Henry & his worthies seemed to manage well enough .

"This story shall good men teach his son" That Crispin Chrispion shall nere go by from this day to the ending of the world, That we in it shall be rememberered

'We few ,we prescius few" " We ' band of brothers' For he who sheds his blood with me this day shall BE my brother. Be he nere So vile,!, This day shall gentle his condition.
And gentlemen in England now abed Shall think themselves accursed that they where not here when any speaks who fought with us on This St Crispins day!

From 'Shakespear's ' Henry the fifft ' from the top of my head but close and seemed fitting .
Regards Rudyard

Homesteader said:
Thanks much for your reply. I'm curious, why do you think they used such long tillers?
Click to expand...

I think that originally they used pike staffs for tillers, and those would have been even longer than 4'. In the day, they would probably have gotten off one or two shot as the battle lines charged, so having the gonne on a pike makes sense from a military standpoint.

The tiller would have a spike on the end to dig into the ground as a recoil control ,these things would recoil all over the place otherwise , that is not a very weapon like "spike on the one pictured , it also has a wall hook which is used from a castle etc where pikes were not so useful .

Have any of you gonners here put a spike on the other end of your tiller? Seems like a pretty idea to me.

Not me, I usually shoot mine over the shoulder style.

Homesteader said:
Have any of you gonners here put a spike on the other end of your tiller? Seems like a pretty idea to me.
Click to expand...

I sure did! Stock is now drying, will publish photos some day …

I'd love to see them. I'm just now beginning to put my first handgonne together. Should be fun

Homesteader said:
Thanks much for your reply. I'm curious, why do you think they used such long tillers?
Click to expand...

I read somewhere that they put the gonne on the end of pikestaffs, and after they had fired their shot, they became pikemen, thus the long shafts. They would have mostly been quite close to the enemy, and probably wouldn't get a chance to reload before the lines came together, after which I think I would rather be swinging a pike than a gonne.