So, I've had some comments about target size.... and it got me thinking, what's easy to shoot? Fish in a barrel? Well now we will get to see if the old saying holds any water! Or if it's just an old wives tail? May the odds be ever in your favor.

The shooting distance for this contest is 25 yards.

No do-over’s. Print and shoot one target only. One rifle and one pistol is acceptable.
Only registered forum members may participate.

If you would like please take a picture of your target and post it on the forum under this months (May) shoot to share with other members.

Patched round ball only. No restrictions on caliber. (a patchless ball may be used if so desired)

Fire 5 shots only, misses count! Mutilated targets or targets with more than 5 holes will be disqualified. If you have any questions, suggestions or concerns please don't hesitate to contact me.

Option 1 (preferred):
Mail your target, postmarked no later than May 31st to:

Option 2:
Scan or photograph your target and email it no later than 11:59pm May 31st to:

As long as I can CLEARLY make the target out I'll accept it. ** Not having the original in hand, If I cannot easily determine which ring the majority of the hole lies within the lower number will be scored**

Shooting fish in a barrel is easy. Now, if the wind and the rain would die down.

This is going to be interesting! And fun!

Printed my target...hope my fishing license is up to date!

Target printed and I don't have to get the crayons out. The grandkids will not like that.

Will shoot it next weekend. Gone fishin’…

don't have time left to waste, shot mine today!
don't be mean now, best i could do. guess i'll have grouse for supper instead of fish! do i get extra points for draining the barrel? 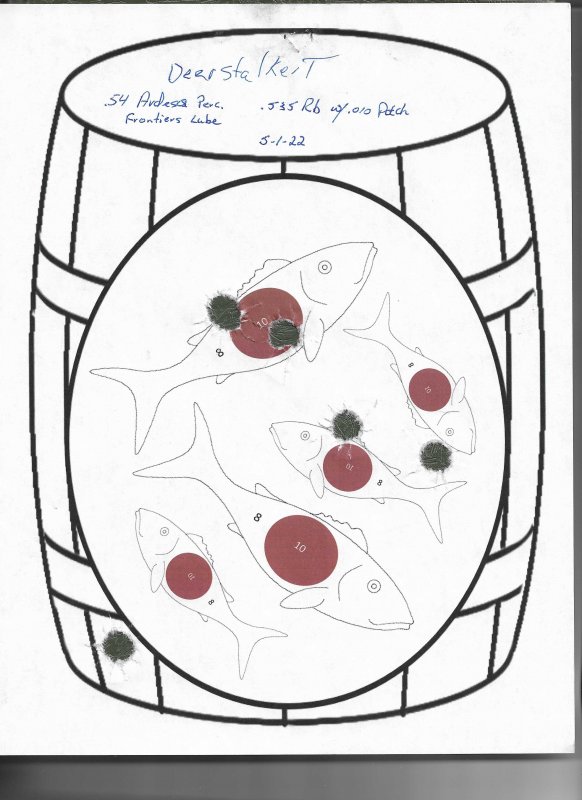 This should be fun. I'm thinking of taking aim, closing my eyes, and BANG!
The way I've been shooting a lottery, or raffle might work.

Hope to shoot it next weekend.

Good luck everybody. These monthly shoots are great, and thanks again Chris for putting them on.

There's something to be said for randomness, ebs!

How do I find previous month's results?

david w said:
How do I find previous month's results?
Click to expand...

Search on "Postal" in the titles and you will see all of the previous matches. April scores not updated yet.

If I had been shooting for group it wasn't too bad. Except for that flyer. Don't know what happened there.
Anyway it was enjoyable.
.50 Thompson Center Hawken flintlock
.490 round ball
50 G of 3F
Pillow tick patch, bore butter lube. Need to find a better patch lube. 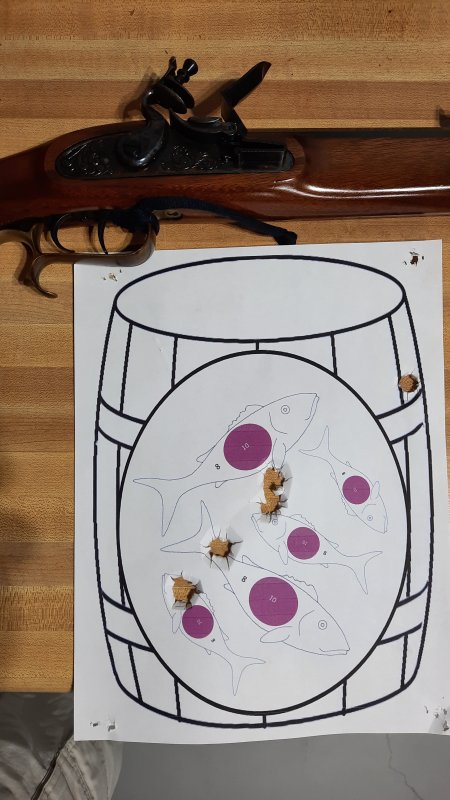 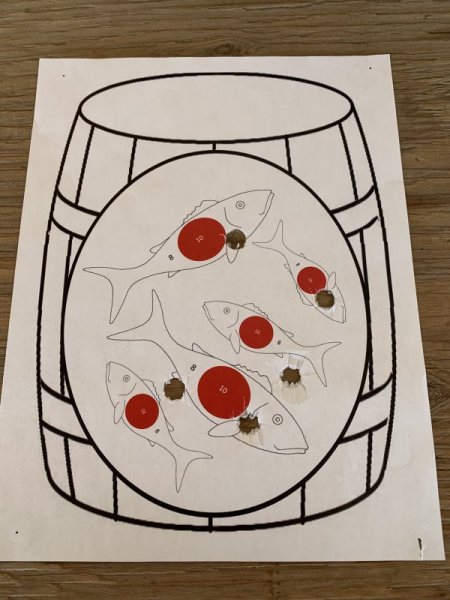 you be eating fish tonight! find some fresh Morels and some lemon and dig in!
good shooting for a month old flintlock shooter! you have me thinking of getting a Frontier! unfortunately the marksmanship doesn't come in the mail so i would still be far behind you!

Dang, you really have got a handle on that Frontier !
Great job !

Emailed it in.
P

Target in the mail today.