Is there a way to tighten the frizzen closed?

I have a Lyman Great Plains Rifle in .54 flintlock that I use for hunting and recreational shooting.

At the bench, she works great, but when hunting I can't even count the number of times that I've looked at my flash pan to double check that it still has powder in it, and it's empty. I do try to hold my rifle horizontally to minimize dumping out the powder from the closed pan, but even still, on many occasions, even when I'm careful, it empties itself out.

I can accept a certain amount of this, but in comparison to my brothers' flintlocks, the Lyman seems to do this a lot more than theirs (other brands). Their rifles are consumer grade like my Lyman, so not comparing high-end to consumer-grade.

Is there a way to tighten up the lock so that after loading the pan and flipping the frizzen into firing position, the frizzen will "stick" tighter against the pan?

Caused by weak frizzen spring, poor fit with the pan or flint too long?
C

If it's a poor fit, and you don't have the ability to immediately fix it, you might think about putting a small bead of bees wax around the perimeter of the pan, That should work ok for the first shot anyway, and, if the weather isn't too hot.
E

If you've got a dremel or good file set and your spring gives a good amount of resistance when you flip it back and forth you should try to raconteur the trip of the frizzen. Sounds like you need to move the contact point forward just a hair.
E

Wait up, this is a factory rifle? If so I suggest your spring is weak as well. Otherwise the screw hole is wallowed out.

Remove the lock and hold it up to the light. Look from many directions for light coming threw the closed pan. There shouldn’t be more then a hair line at the widest gap. Use a transfer blue to mark the contact points by bluing the frizzen and closing it on the pan. File only the spots that have blue till you get a minimum gap. Don’t expect a perfect fit just good. If you try to use a dremel grinder all bets are off. It’s only going to take a small amount in just the right spots to improve the fit. Like you said this isn’t a high end gun but it’s still a good one. Once the fit is good replace it on the rifle and check the fit to the barrel too.

Don't fix it yourself until you do what Phil says and take a good look. First...if you're using 4Fg, see if 3Fg corrects the problem.
Now when you look at the frizzen, IF you see there is a gap and it's at the forward part of the pan, then filing down the back end of the frizzen will simply worsen the problem...because the problem is that the hole for the frizzen screw is improperly positioned on the actual frizzen. IF that hole is drilled too low, the frizzen goes beyond resting parallel and flush with the top edge of the pan and rests at a slight angle, leaving a gap...so when you carry the rifle muzzle down, the priming powder pours out. What you need to do in such a case is to replace the frizzen itself. 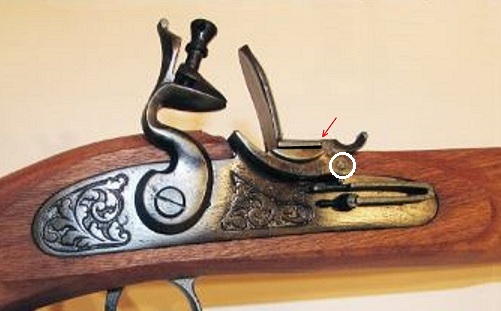 This is a real bad one here 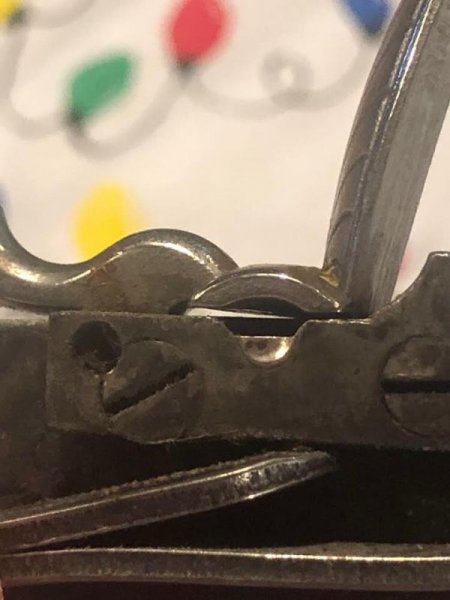 One way of improving this problem is to remove the frizzen and feather spring from the lock.
Sand the underside of the frizzen to remove any bluing/ color case hardening, rust and oils.

Apply a good soldering flux to the area and wrap the upper part of the frizzen in a wet cloth to keep it cool.
Then, using a propane torch, gently heat the lower area of the frizzen (pan cover) and apply a layer of soft solder to it.
If your careful, you can build up a thickness of over 1/32" on the entire surface. Remember to dampen the cloth regularly to protect the hardness of the upper area of the frizzen.

Once you have a layer of solder built up, let it cool and then reinstall the frizzen in the lock.

Carefully, using a small flat file, file away the solder where the inletting black or lip-stick shows.

Repeat this process until the solder on the entire lower surface of the pan cover shows that it is contacting the top of the pan.
If the transfer medium gets too thin to transfer, apply a little more.

If you take your time and work carefully, the final result will be a line to line fit with no gaps whatsoever.

To beat someone to the punch, yes, the 400-500 degree F temperature solder needs in order to melt will temper the steel frizzen to a slightly softer condition but down low where the blade on the frizzen meets the pan cover the softer steel will not harm the frizzen. In fact, it will make it tougher and less likely to break.

Or you could do the pan and not worry about the frizzen temper.
C

Try Useing 3FFF instead of 4 FFF in the pan, if it still leaks out then you need to fix.


Opps!, I see Dave already beat me to that suggestion.

Thanks for all of these tips. As I’m not qualified (nor too proud to admit it) for most of these suggestions, I’ll try the low hanging fruit of using FFF or FF instead of 4F (currently). All other options would require that I find a local builder, and I don’t know of any so far.

TXFlynHog said:
Thanks for all of these tips. As I’m not qualified (nor too proud to admit it) for most of these suggestions, I’ll try the low hanging fruit of using FFF or FF instead of 4F (currently). All other options would require that I find a local builder, and I don’t know of any so far.
Click to expand...

I also think that Ive been adding too much powder to the pan, possibly gunking up the area around the frizzen hinge?
C

TXFlynHog said:
I also think that Ive been adding too much powder to the pan, possibly gunking up the area around the frizzen hinge?
Click to expand...

I wipe the pan and bottom of the frizzen between shots.

That was a Tradition trapper and it went back for a new one.
7

The best way i found to control this is simply do not charge the pan until you are ready to shoot. Let's face it. with a flintlock you are not in a big hurry to rip off a shot any way.

I keep my hammer on half-cock and a cotton patch under the frizzen with the frizzen closed.
tht eliminates two problems:
1) the powder falling out
2) the powder getting damp

If I am on stand. tree stand, sitting on ground, etc., I cock the hammer, set the triggers, and have a piece of cotton cloth under the frizzen.

When I see a deer and I commit to shooting, I charge the pan and shoot.
This also eliminates the sound of cocking the hammer and setting the trigger
R

It’s a mess. I’d get a new lock unless I knew my stuff and knew a welder or had an undrilled frizzen blank. The frizzen pivot hole could be welded. Then the frizzen and pan fitted, the hole re-drilled, and the frizzen re-hardened and tempered. Or start with a new, undrilled frizzen. Replacing the lock is less work.
G

Probably a dumb question but.... could a bead of JB Weld be applied around the top edge of the pan and once hard then filed to match the bottom of the frizzen?