I've had this kit for several months and started tinkering with it about 3 weeks ago. The Beech stock was a real bugger, might as well been made out of Sweet Gum. There were several small knots that really dealt me fits. After I finally had the stock about as good as it was going to get, started prepping for a stain. I wet and whiskered three times and still got a little fuzz, sealed with Tru-Oil that was thinned with denatured alcohol, then waited a day for it to dry. Repeated, then lightly sanded before staining. I fought the blotches which I understand gives more problems on the end grain when working with Birch or Beech, and after sanding and reapplying my Fiebings stain mix, I decided to just accept it and let it go.

Barrel and lock was finished with Laurel Mountain Browning Solution/Degreaser. I disassembled the lock and stripped the faux case coloring with Eagle One Chrome Wheel Cleaner. Both stripped easily, but I had to hit the hammer lightly with a bead blaster because it wouldn't take the browning solution. I cleaned up the leaf pattern on the hammer as well as the thumb grooves on the hammer spur. The lock bolt/screws left a lot to be desired, so I used two of Pedersoli's lock bolts for the Kentucky Rifle, just had to trim length a little. Same with the tang bolt, just a cheap countersink screw, so I replaced it with a tang bolt originally for Pedersoli's Brown Bess, trimmed, reduced the head diameter slightly and cleaned up the recessed hole in the tang, making for a cleaner look. I defarbed the barrel except for the proof marks, jokingly, I had said that I was going to have it engraved with J.C. Higgins signature, as a friend and I had always wished that Sears & Roebuck had sold a few muzzleloaders back during the J.C. Higgins timeframe.

I bought the sights from Track of the Wolf. Rear is one of their primitive sights with skirt #RS-DRU-CT, and the front sight is their low blade #FS-TC-LB. The dovetails on the Crockett were quite a bit narrower than the above mentioned sights, but with a little patience and some quality files I finally got the sights to fit. If you notice around the brass thumb piece, you will see a black diamond point border. When Traditions installed the thumb piece, they made the inletting to large on one side and had filled it with epoxy, so I began thinking how I could dress it up a little to hide their mistake. I used some old Pelikan India Ink that I've had since high school (almost 50 years), and got busy with several art brushes. I also blackened the cutaway above the lock bolster because there was a small knot and that area turned mostly black anyway. I also pained a thin border around the wedge escutcheon inletting, but I'll probably cover this with different escutcheons, as by accident I found out that the T/C Hawken escutcheons have the same hole spacing and although a larger profile, they will fit perfect after doming a little to fit the profile of the forearm. The T/C Hawken escutcheons have a rebated area on the back that is the same profile as the Crockett's inlets, but will be proud like the T/C rifles and not flush like the Crockett's.

The decoration on the muzzle was an afterthought and can be changed if I want to change it. I used a sunburst silversmiths stamp that I bought from Thunderbird Supply years ago. Some are not perfect as I just eyeballed it. Hard to keep the stamp from bouncing, but I think it looks good.

I blackened all of the brass hardware after cleaning up and polishing, with the same military specification solution for blackening brass hardware during WWI and WWII. It is not actually a true black in color, as it varies according to the percentage of copper in the brass or bronze alloy. Since I already had the solution on hand I thought I would use it. We use the same solution to blacken our brass which we use on some of our WWI and WWII accoutrements. It is not a very durable finish, but it wears evenly and as it wears, it will present more of an aged bronze patina. I would say it is about 5 times more durable than Birchwood Casey's Brass Black.

I haven't had a chance to see how it shoots, nor have I decided how long I want the ramrod to be, that will be later. Also, after sanding to fit, the hickory ramrod was scorch banded with a torch, then dyed with three coats of Fiebings "Yellow" alcohol based leather dye. I know some will like it, some will hate it, and some will pick it apart, but by golly I'm going to have fun aggravating some squirrels with it. In the end, it was aggravating at times, but had a lot of fun trying to see what I could do to improve to my liking a lesser expensive kit. All told, I have right at $410 in it, that's including the extra parts. 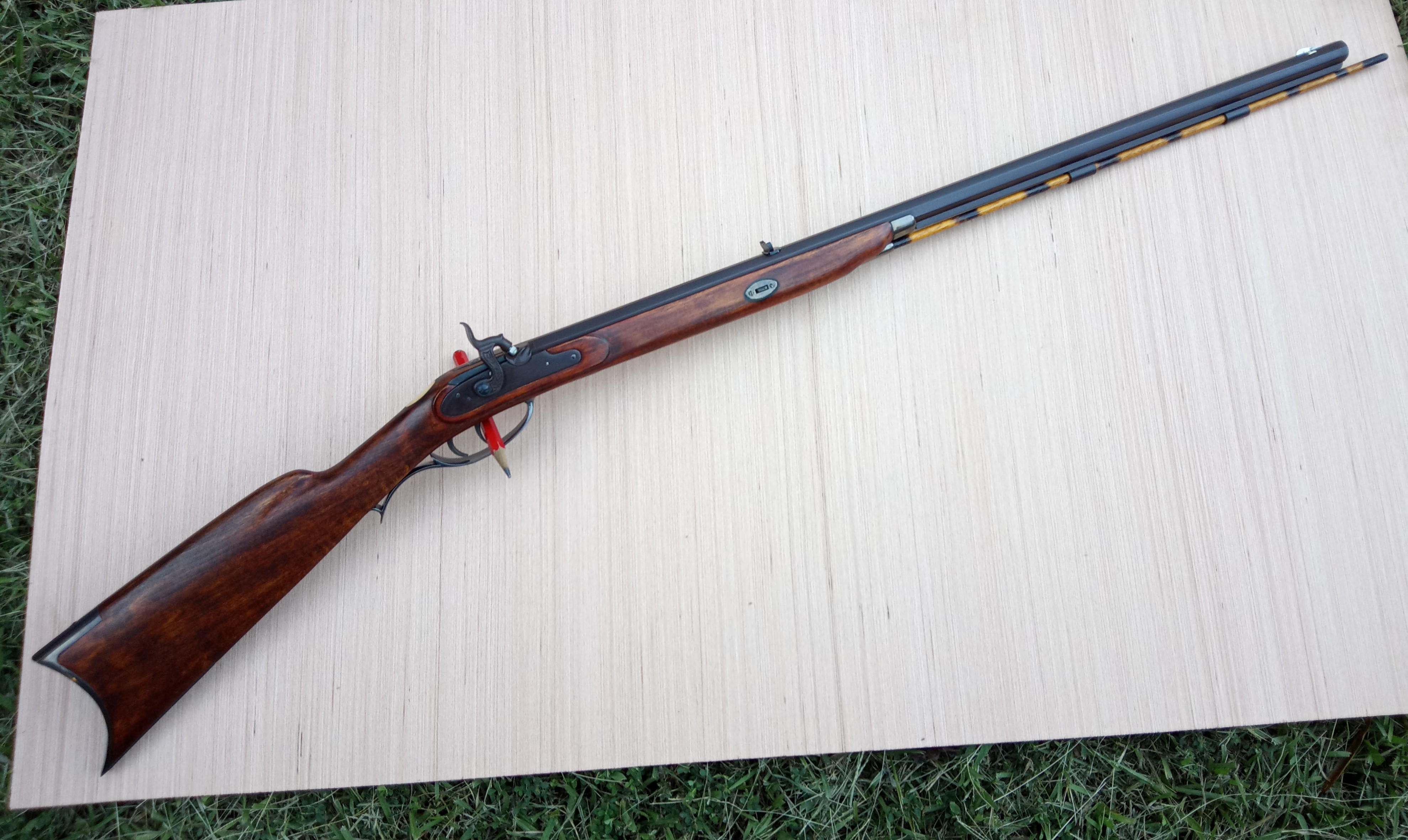 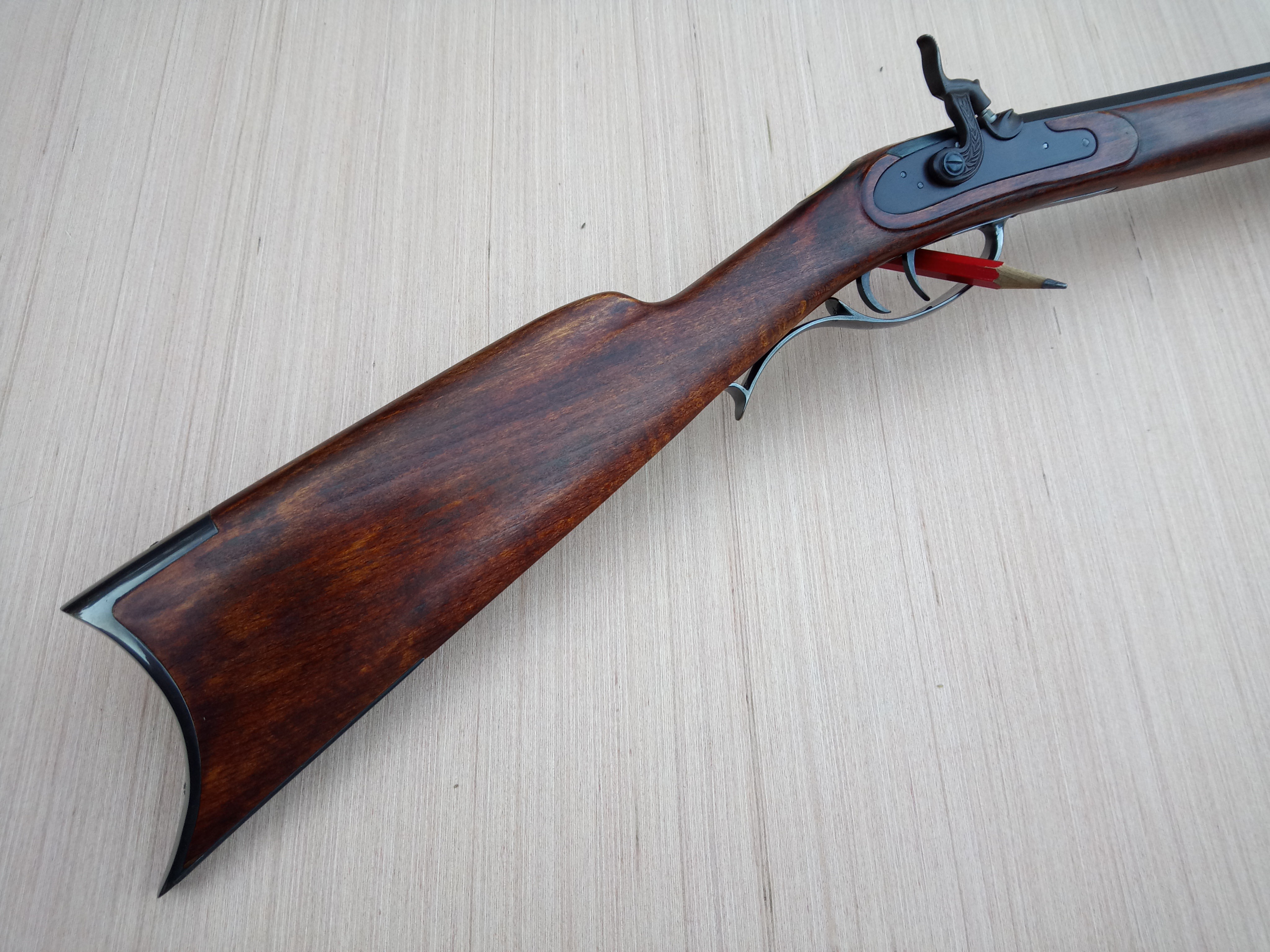 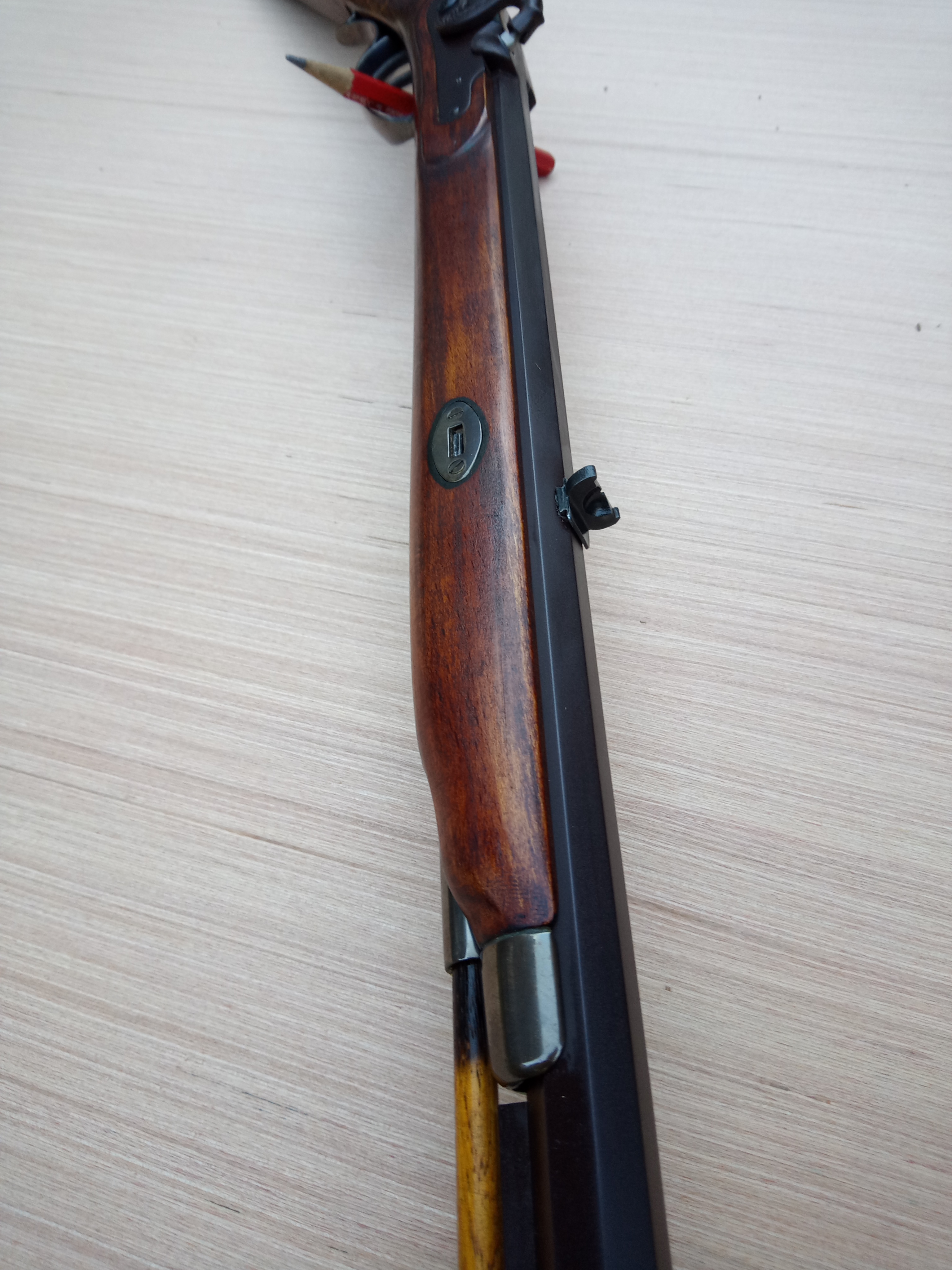 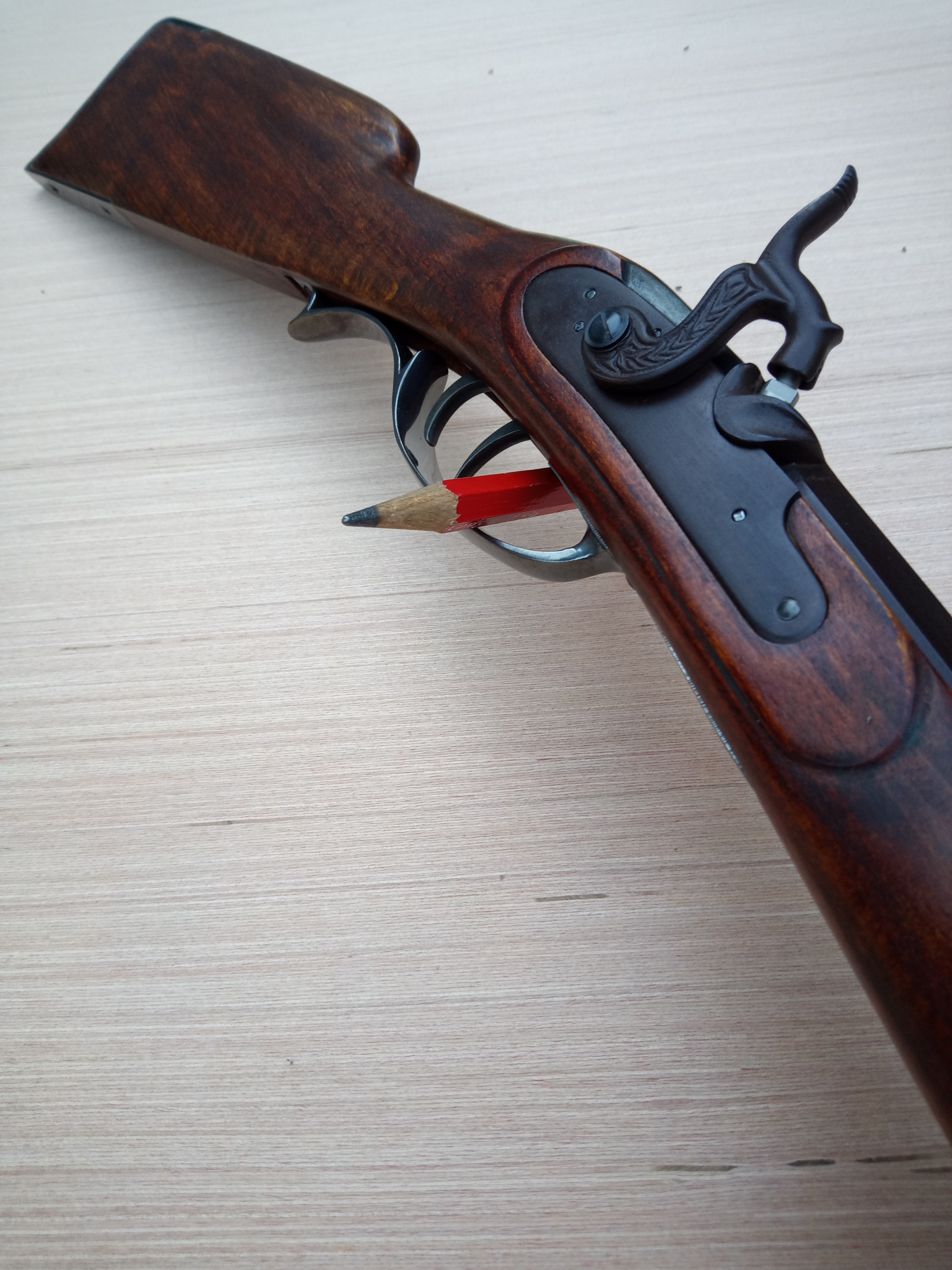 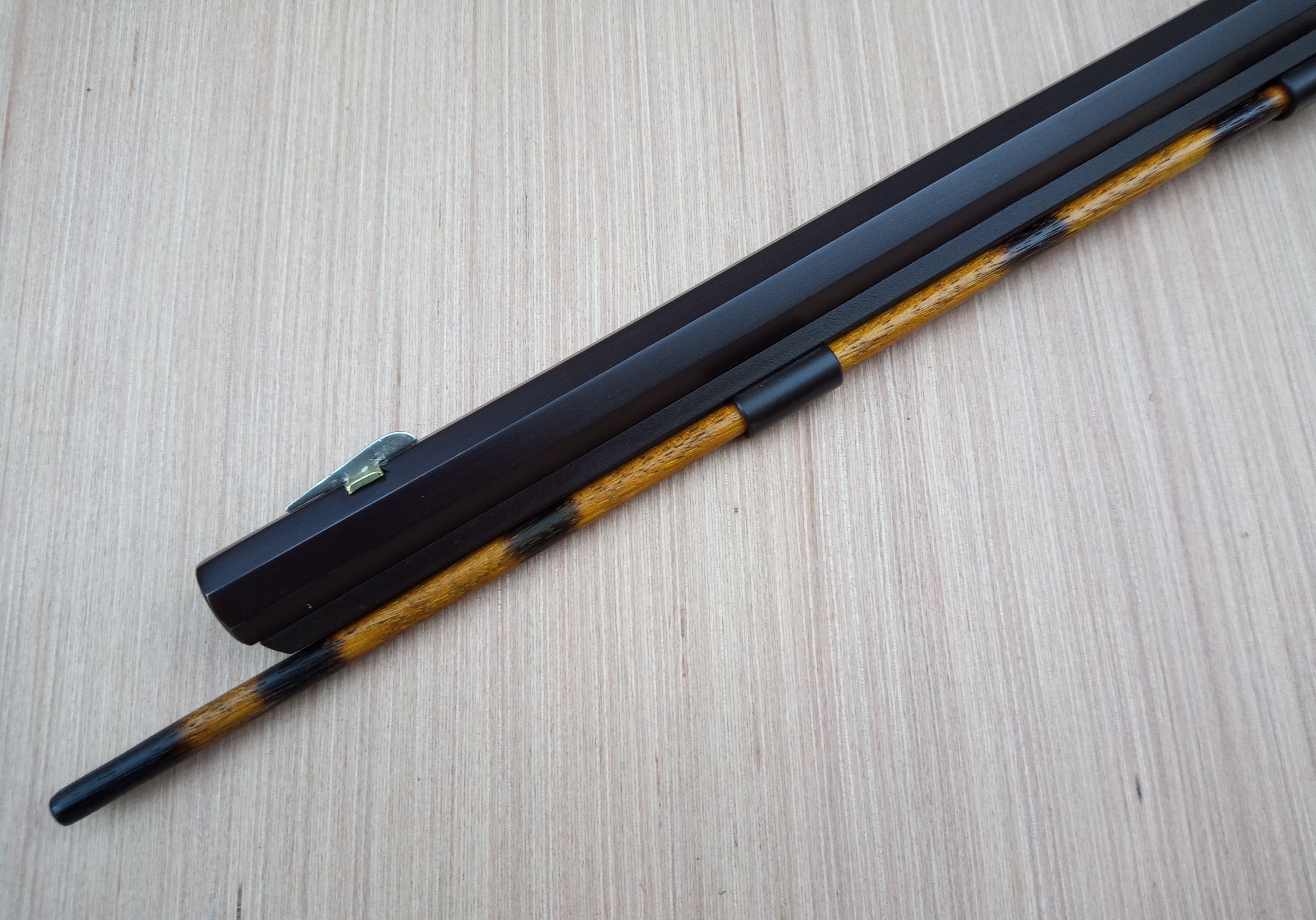 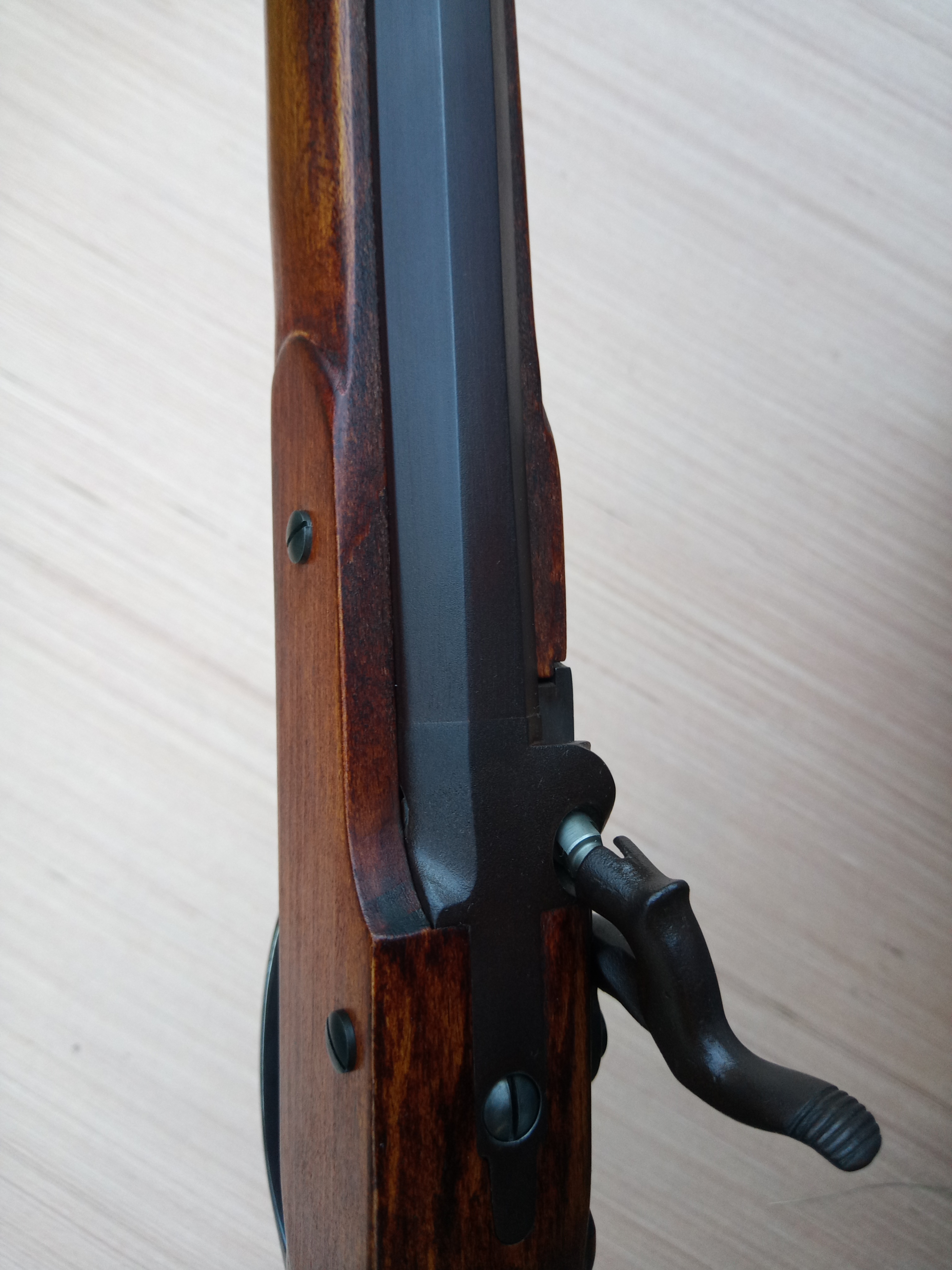 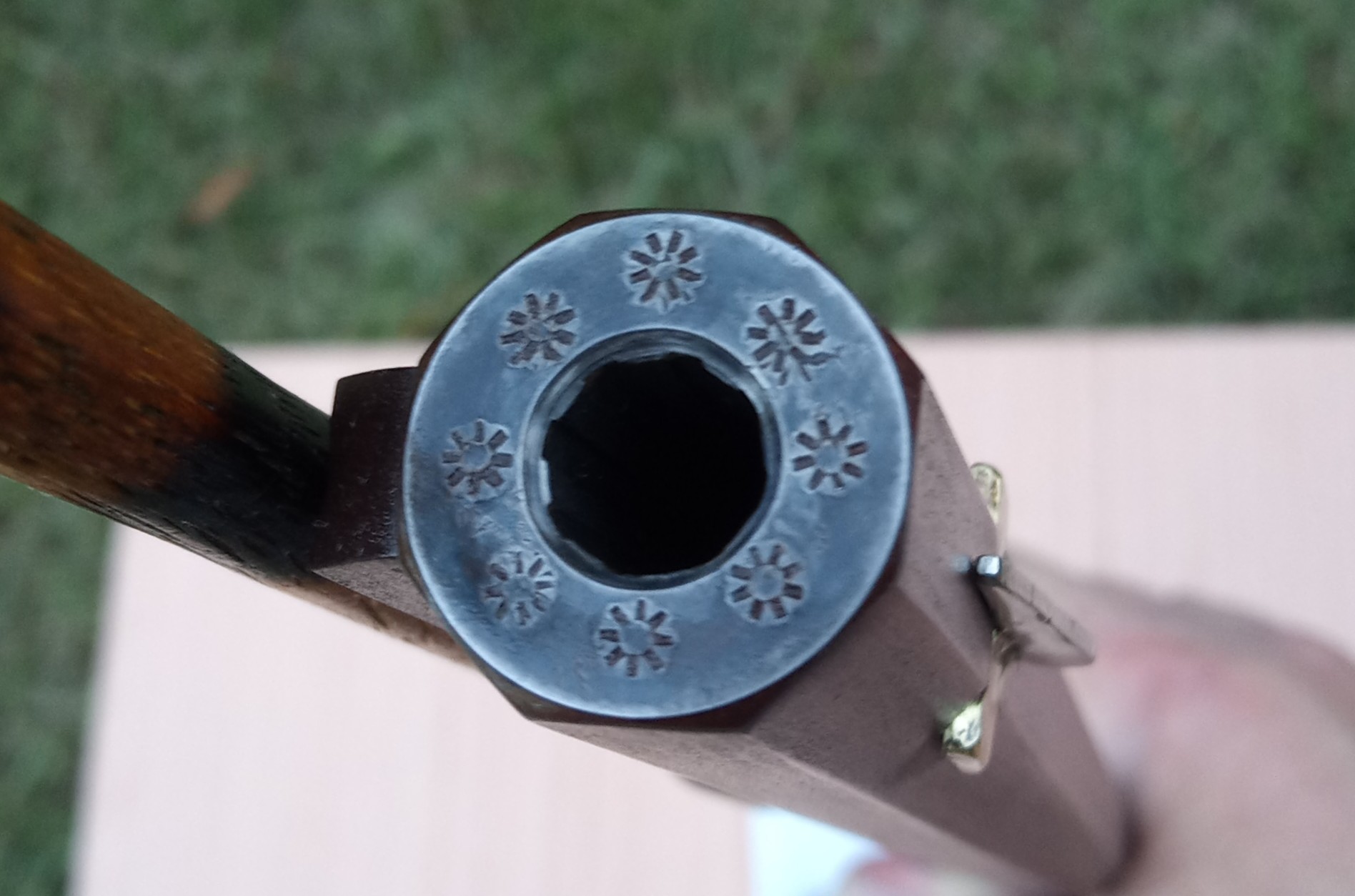 Nice job! I have built two Traditions kits so far and can tell you the Beech stocks are tough to make look decent, but you made yours look good. I took the chance on buying one of their assembled Crocket rifles and was surprised to see how well the stock looked so they must use a different type of wood for the assembled rifles. I still haven't shot mine yet, but I'm hoping for a good day this week to try it out.

Forgot to mention, thinned the buttstock considerably, cutback and extended the wrist about 3/4" and fluted. The triggers appear to be MIM parts and were rough on one side, cleaned up, smoothed, then blued. All screw heads are blued. Also, instead of using motor oil for curing the barrel after the browning process, I wanted to try Ballistol. In using the Ballistol, the barrel didn't continue rusting as bad as other barrels have done just using motor oil. One thing I discovered awhile back with barrels that continue to rust for days after the browning process, that if I rub in a good coating of "Bearguard Original" Leather Dressing on the browned barrel and metal parts, it will prevent it from rusting, maybe a little rub-off the first time you wipe down the barrel, but I've not experienced any rust afterward. Great thing about the "Bearguard" is that it's all natural, made from wild Maine beeswax and bear fat, that's it, no petroleum or any additives. I've used it for over 30 years on everything from boots to saddles, including holsters. I use it for bullet lube as well and on patches while hunting. It is a natural for leather smooth bore wads. This is the third barrel that I've treated with the "Bearguard" and not experienced any problems. I give a heavy coating to the underside of the barrel prior to mounting it in the stock.

Here's a link if anyone cares to read up on the Bearguard. Bearguard Dressing

Great job on that stock, it almost looks like walnut! Great job all around!

Finished swapping out the factory escutcheons and wedge. Replaced with brass T/C Hawken escutcheons, screws, and wedge. The T/C escutcheons are larger in profile, but on the backside they step down and just happened to fit the existing inlet. 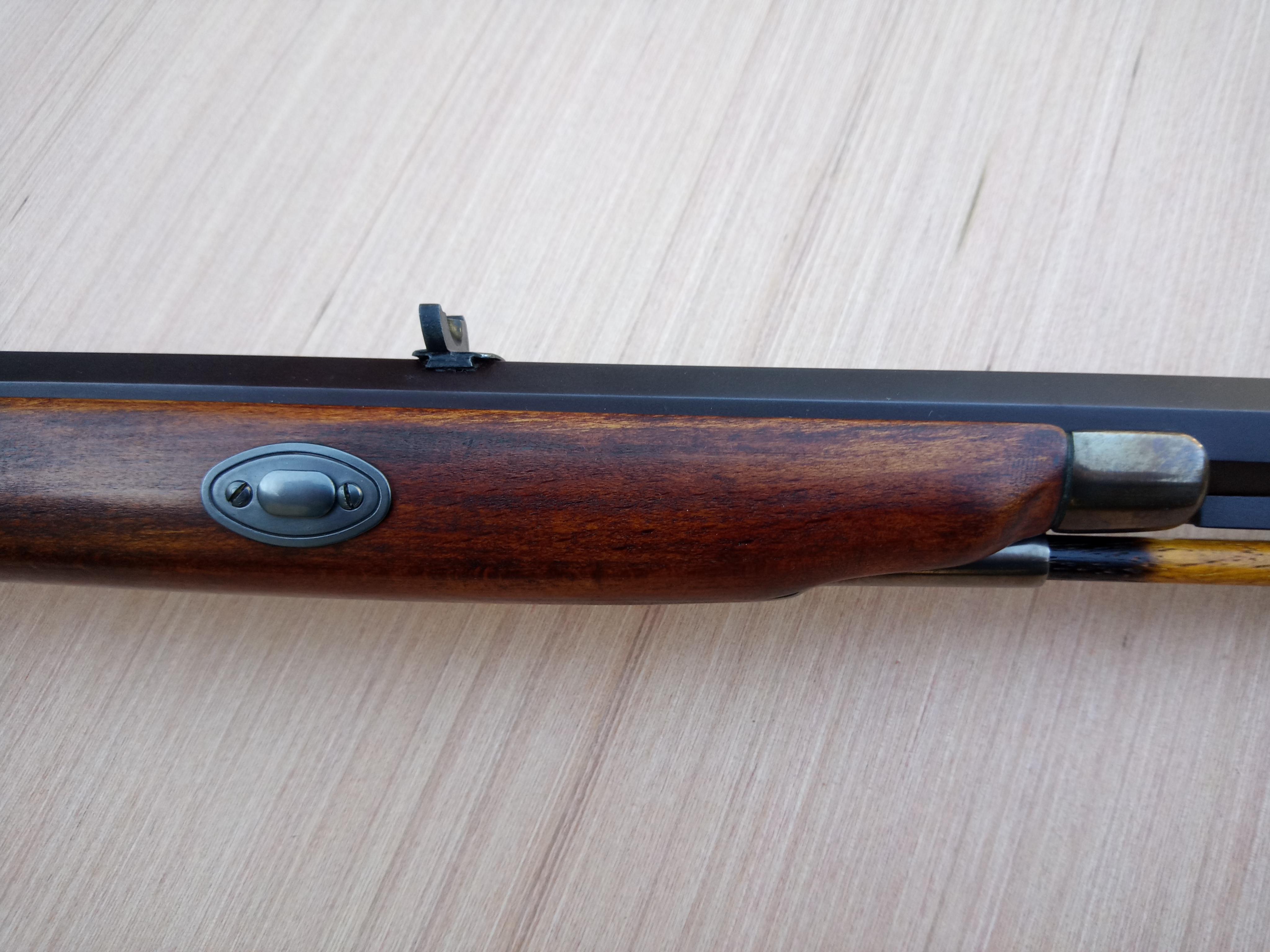 Gunny5821 said:
Finished swapping out the factory escutcheons and wedge. Replaced with brass T/C Hawken escutcheons, screws, and wedge. The T/C escutcheons are larger in profile, but on the backside they step down and just happened to fit the existing inlet.

Wow! Those look great.
A

I like that a lot, I enjoy tinkering with those types of kits as well.

Thinking outside the box always is pleasing to me. I like things that reflect the individual who makes the endeavor. Great job! Pretty gun. Polecat

I've owned a Crocket so I know what they look like and the changes you've made are wonderful !!

V
I Have A Functional Rifle!
2