I know this was made in the infamous Afghan "Gun Bazaar"
I also have a little history on this piece.
It was used by an Afghan villager to kill Russians during the 80's Russian invasion.
After the USA invasion to rid the country of the Taliban and the subsequent time of relative peace that followed, A Major Richards was presented this piece by the villager that was then the village leader. It was a token of appreciation for the 3 tours of duty that the Major spent there building and returning the village to a livable place.
The Major brought it home, and some years later, died peacefully in Texas.
This one came from that collection.
I have torn it down and it had decades of gunk, oil, what smelled like diesel or maybe camel dung and who know what else. The barrel appeared to be about a 45 caliber until I got it cleaned out. It now measures about 70 caliber. Surprisingly, the tube is pretty smooth and is smooth inside and out. The finish is a wiped on brown color. No rust was found inside the barrel, outside the barrel or in the lock. The nipple appears to be a musket nipple with a square base and a hole big enough to to pass a 3/16 bit through.
So I will need to replace that. I had to soak it for 2 days to get it to finally move, then with a 12 point socket and a small bar. But that part is now done. The threads on the nipple are slow twist, very slow. The diameter of the threaded part is .314
Ptretty massive ignition piece eh?
Before I start buying stuff I don't need, can anyone give me a definitive guess what this may be or a part number of a replacement? I would not mind replacing with a #11 cap holder.
Pics attached. 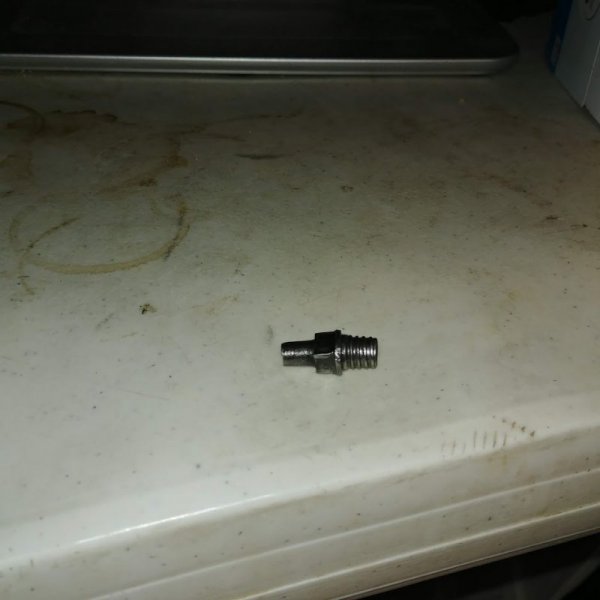 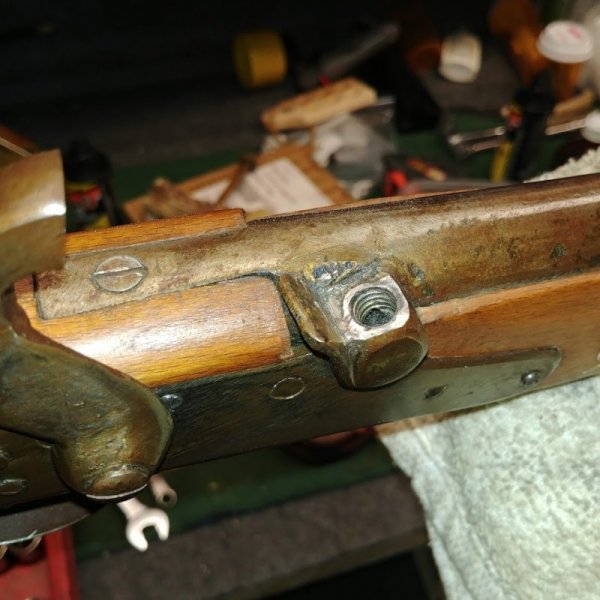 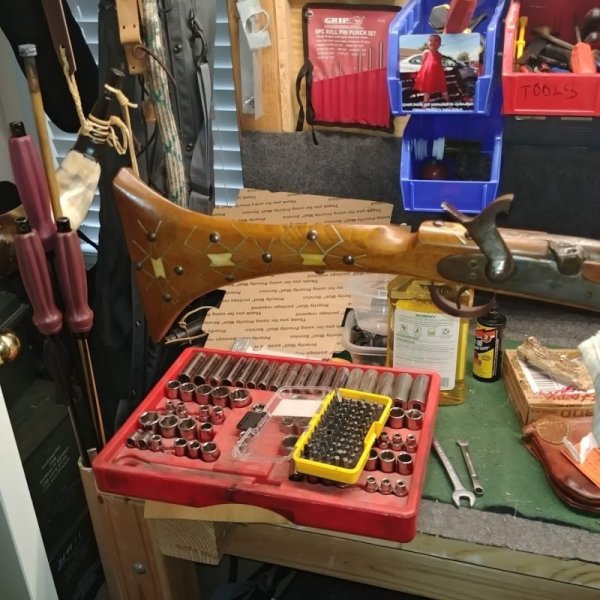 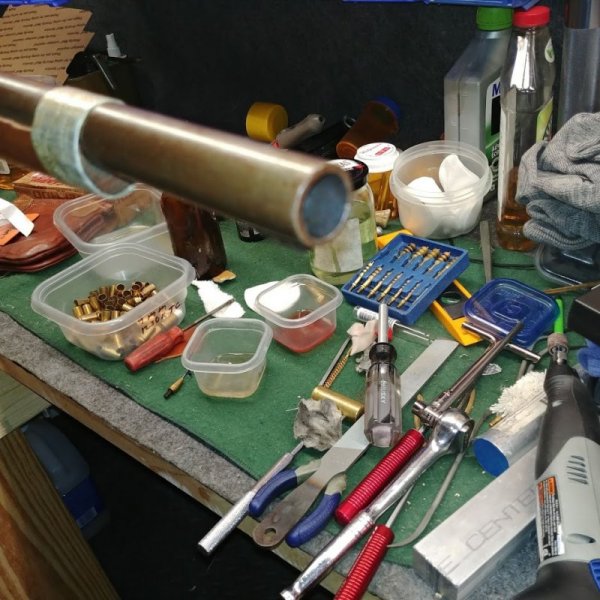 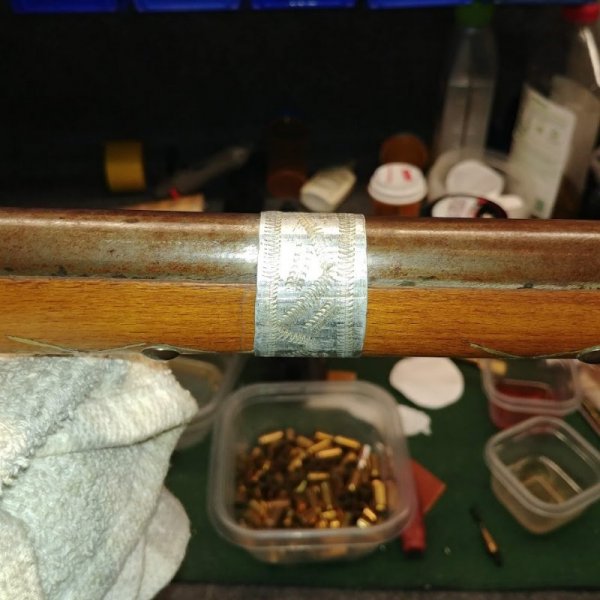 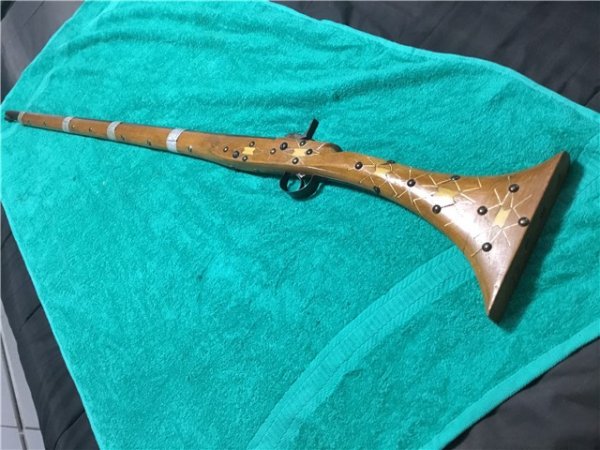 I would take a set of metric/SAE bolts and carefully determine if any by chance matched the pitch. I recently had to make a breech plug from a metric bolt that I obtained from a local hardware store. Some independent hardware store owners are savvy on things like this, as are most machinists. It could be a different system, like Imperial. If your gun could only tell it's tale of service with the Mujahideen! Good luck with your project, it will make the most unique shotgun in the woods insha Allah!
S

Very interesting. Few people realize that the military use of muzzleloaders has never truly ended.

A determined Afghan, hidden away in the bushes armed with his jezail or antique Enfield musket, is NOT something I’d want to go up against.

Doesn’t matter if it’s a 5.45x39mm or a .58 caliber ball casted from some blow up Soviet truck battery lead, it’s all deadly and it’s all very serious when it blows a hole in your chest. I just came from Afghanistan on a tour of duty a several bazaars had old Enfields and such for sale. You just know that there’s some still out there, loaded and primed, ready for war in that unconquerable country...
S

I would also love to see pics of Enfield rifle muskets used by Mujahedeen fighters, given that they just might be the weapon that has had the longest "service life" in combat. The army of Yemen used them through the WWI period.

.314 is very close to the measurements for 5/16- .3125 depending on what your tool to measure the thread looks course to me. Needs a thread pitch gauge put to it.

The 5/16-18 thread goes way back when it comes to nipple threads.

The original Enfields, Springfields and a number of other military muskets and rifled muskets used that size.
With the British presence in the Afghan area going back to 1839 it wouldn't surprise me at all if the threads in this gun used the same 5/16-18 threads.

I looked at those, but take a look at the dimensions of the 8 x 1.25 metric.
It too - is VERY close to the same ( a few thou off....
I am going to run by the hardware store tonight and see if I can match it up with the nuts they have in stock.....
I hope they have both the English and Metric in stock, and that the nipple is not some third world invented non standard creation.
Otherwise, I guess I will order a spread of nipples and hope one of them fits.
Will TOTW take unused nipples back?
5/16 = .3125
8mm = .3149
I do not have a pitch on my gauge that matches the threads.
S

Get someone with a tig to fill it and then drill it....keep it original. Fairly easy to do.

seaguy said:
Get someone with a tig to fill it and then drill it....keep it original. Fairly easy to do.
Click to expand...

I hope your hardware is better than mine as they don't have much but the most common. Good luck and let us know what you find
B

Take nipple to hardware store. I think if you try an 8-1.25mm nut it will spin right on. If it does and you want to #11s TOW has them. Pretty sure ERI-S is part.

Update,
Trip to the hardware store was fruitless.
They have a "try it" rack of all the thread sizes.
This nipple would not screw into any of them.
5/16 or 8mm, all pitches.
Looking very carefully at the snail and the nipple, I think it was forced with the wrong thread, and both nipple and snail are damaged. I ordered a 8mm-1.25 helical kit and will drill it out and line the hole with a new set of threads.
This is the process I used to repair an old pistol that had extensive damage to the nipple threads. It worked like a charm.
If that does not do it, I'll weld it up and drill it back out.

I saw something similar years ago when someone handed a kid with a cva what I think was a t/c nipple, it was undersized and didn't fit well. He screwed it in and used it but it leaked. The kid kept tightening it and messing with it and it finally gave way, taking most of the threads with it.. He took it to a smith who drilled it out to the next size up and screwed in a proper fitting nipple. Charged the kid $20.00...
I was between roughneck jobs and it almost broke me.

I'd drill it out to the next size nipple, tap it out, and burn some powder.

Peter Hathaway Capstick wrote of Okavango Delta locals using "gas pipe" muzzleloaders with a piece of rebar for a bullet and wounding Cape Buff and bigger game...usually with a bad ending for everyone involved.

Yup, something that does need to be addressed. I ordered a kit that has three different length coils in it. One of them has the exact number of coils that are on the replacement nipple itself. I measured the depth of the hole and there is just enough space to keep the entire coil in the metal of the snail. Other things folks who may use coils for need to make sure they look at the coil material. Some of the Chinese knockoffs are not stainless. Brand name Helicoil is.

I'd drill it out to the next size nipple, tap it out, and burn some powder.
Click to expand...

I am at the max nipple size now so a coil or a weld up will be the only choices.
I'll try the coil and "set" it with metal epoxy. This is what I did with the pistol I repaired and a few hundred shots later, it's still in great shape. I don't intend to run any heavy charges in this old gun, especially considering where and how it was made. 30 or 40 grains should get the ball to a 40 yard target, about my max range for a sightless smoothebore anyway!

Sounds like a good plan... use a handful of broken glass or pebbles and it will feel like it's back in the hands of the Muhajadeem.

I thought you wanted to change the nipple because the threads were failing...i think i made a mistake.

Btw, the William Moore dbl bbl i bought has musket nipples with HUGE holes, maybe the same size. IIRC, Britsmoothy said it was common practice for old guns to have huge holes and strong springs.
If the mainspring will hold the hammer on the cap after firing, why change the nipple?

Eterry said:
Sounds like a good plan... use a handful of broken glass or pebbles and it will feel like it's back in the hands of the Muhajadeem.

I thought you wanted to change the nipple because the threads were failing...i think i made a mistake.

Btw, the William Moore dbl bbl i bought has musket nipples with HUGE holes, maybe the same size. IIRC, Britsmoothy said it was common practice for old guns to have huge holes and strong springs.
If the mainspring will hold the hammer on the cap after firing, why change the nipple?
Click to expand...

The main spring has a lot in common with the average deuce and a half truck suspension. Part of that (I think) has to do with the gunk that is still caught in the springs. I have a spring vice on the way and after I get the lock torn down and properly restored, we will see how strong it really is. With the proper nipple it will not need a cannon fuse sized hole so the spring may get de-tempered a bit so it is easier to shoot. I takes a come-along now to pull the trigger. Hoping to lighten that up a bunch.

Thanks for the follow up. I like the Heli-coil fix. To bad the right nipple could not get determined. I myself would want to shoot that gun and hope you get to.
B