A good hunter is never limited by his choice of weapon.
Hunting is a skill, any weapon will do.
A

Carbon 6 you are very correct with your statement, as long as the local game warden is in agreement with you. As to the 45 cal. it will get the job done as long as the user has the skill as you stated.

Heck. A ballpeen hammer and an apple is enough if you know what you're doing.

100% enough for deer. I was also hunter in the past, and I know what I am talking about. The main thing is to prepare all the things you need for hunting (special clothes, binocular, aid kit, gun obviously and bait). I remember my last deer hunt - I put the crosshairs on him and squeezed of a 12 gauge load involving a .690 roundball out of my H&R Ultra Slug Hunter. He was full of blood and both lungs had huge holes through them. To make a story not that sad, 3 days ago I read an article about a politician, who pleaded guilty to shooting a deer on private land (https://www.cbc.ca/news/canada/calgary/derek-fildebrandt-deer-kill-charges-didsbury-court-1.4516638). They would have never given evidence for his guilty, if he hasn’t pleaded it by himself, lmao, nothing but a facepalm.
B

Yes, It's all about shot placement!
S

My ancestors harvested deer with a 40 caliber, which is illegal in my state, but back then, not too many lawmen around checking calibers.
W

In this world of "everything needs to be bigger and better", it's all too easy for people to forget how fragile living things are, and while it is important to use enough gun for the animal at range you want to hunt... it doesn't require $$$$$$ 330gr uber-bullets and 150gr charges of semi-smokeless powder or toned-down-smokeless to smoke deer out of the smoke-poles we use "smoke" powder in (that's a lot of smoke in a sentence lol).
Last edited: Aug 3, 2021

My wife killed this with a .440 prb ahead of 70grs 3fg Goex. The shot was at about 20 yards. The deer ran but left an easily followable blood trail and recovery. 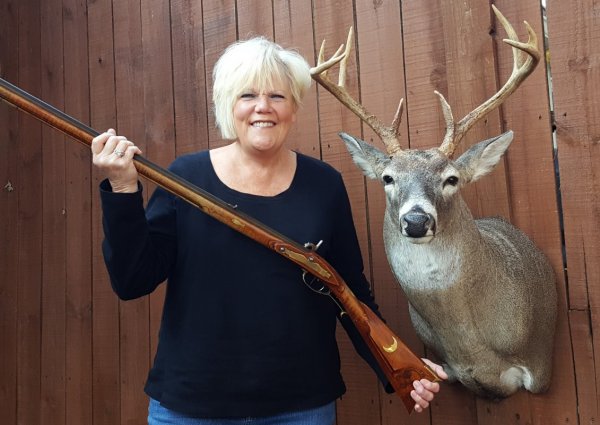 .445 ball and 70gr of Goex 3F, this is one of many taken with the same rig. They all run about 50 yards after the shot, I hear them fall. I don't get the intense blood trails that I get when I shoot a deer with my .54 but they are easy to recover. 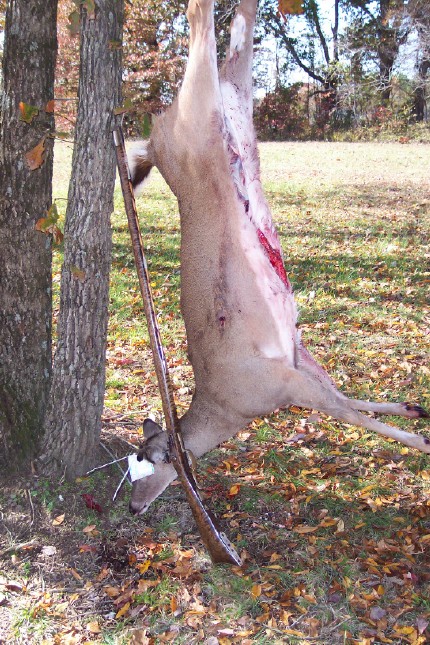 A few years back in my area there were a number of tree farms were popping up in my area. As a result the deer had to go.They got permission from the state to accomplish this by using professional hunters, i.e. law/game enforcement officers at all hours of the day up until 10:00 pm. The deer were given away for any who wanted one for food.
It was around one of these times I was at the gun range with my .36 T/C Seneca just relaxing making smoke. This gentleman approached and asked questions about the gun. It comes about he is one of these officers participating in the shoot. I said how I often wondered if this gun could kill a deer humanly at a reasonable range. I thought that I would ask if I could get to participate and do some shooting with this gun, seeing they were going to get shot no matter what. He told me no that only designated people allowed, but if I wanted I could ride along (yes they shot them from vehicles) and he would use my rifle if I loaded it for him. So I let him shoot a few shots to get acquainted with it, and a time and date was set. The deer was a doe of about 110 lbs at around 35-40 yards, 55grains of fffg Triple 7, cci #11 cap & patched round ball. The deer did a bucking kick, run around 40 to 50 yards and stopped, 30 seconds later fell dead, ball under hide far side, broke 2 ribs. Do I advocate for .36 cal state wide ?, no but I know it can be done. Yardage and shot placement.

Has been mentioned many times, shot placement is the key. Took a few deer with the .50 flintlock, then built a .45 underhammer and shot a lot more over the years. The last 4 pointed changed my mind and I built a .58 underhammer, the reason was shot placement as the .58 would have done it better with the same mis-placed shot. Shoot that 45 off hand at the range to so when it comes time you get that shot right. JMO.
N

Yes, yes and further more YES. A .440" RB propelled by any sensible hunting type load of powder is fine.

When people speak of "enough gun for Deer" are we speaking the large dog sized deer sometimes found in the south and south east, the rabbit sized deer of South America or deer in the 150-300 pound range. It's like asking if women are skinny.
W

Flintlock said:
When people speak of "enough gun for Deer" are we speaking the large dog sized deer sometimes found in the south and south east, the rabbit sized deer of South America or deer in the 150-300 pound range. It's like asking if women are skinny.
Click to expand...

When North Americans are talking about "deer" unless otherwise specified, it is pretty safe to assume they are talking about the common deer species in NA lol. Those would be.... White Tail, Black Tail, and Mule Deer lol. All species average (Continental Average) of 100-300 lbs (southern does are on the lower end of that, nothern WT and Mule Bucks tend to be on the high end) on the hoof... about the same weight as a human. It's not the same as "asking if women are skinny", it's not like the guy is from Cape Town or Porto Alegre, asking about a future hunt in WA lol... In NA, we distinguish our large deer species from their smaller brethren (because they are notably larger), unlike our friends in Europe, who call Elk sized animals "red deer"... and poodle sized animals "roe deer".
Last edited: Aug 4, 2021
L

nightwolf1974 said:
First off, I hunt with my muzzleloaders. Thinking of a .45 cal. ML for deer hunting. Is there anyone who thinks that a .440 patched RB at 1231 ft.lbs of muzzle energy isn't enough for deer size game?

Alright, so first off, you've heard a lot of good info on the .440 round ball. I think..., IF we somehow could take a survey of all the deer in the United states taken by round ball in the era of black powder, we'd find that most were taken in the under .500 size range.

You will hear a lot about "shot placement". Which is absolutely true. What we sometimes forget, is that it's true for ALL rifle hunting, not just "us". Any and every rifle of every era also has a range at which that round simply isn't going to be effective, even when the impact point is where it is supposed to be.

Your quandary about the size of the round ball is because you, like a great many of us, were exposed over the years to Magnumizers. This is a chap, who is at best a mediocre marksman with his hunting rifle, and has not bothered to hone his skill nor his hunting load, to do better, SO..., he tries to make up for the lack of marksmanship and load accuracy with a larger bullet and as much velocity as his shoulder can bear, as he thinks it will do more damage upon impact. THUS he can compensate for where he's lacking. BUT, he simply misunderstands that it's not a lack of damage, but where the damage happens that is going to net a quick, humane kill, without much need for tracking.
(These are the same guys who think any muzzleloader won't harvest deer btw)

We in the traditional muzzleloading world only get one shot on that big game, which we know and understand, so in our modern minds we know that shot must count. We become well versed in where on the animal to aim and at what ranges to engage that animal, we work up accurate loads, and we practice to take advantage of those loads.

So yes, a good, accurate load, with sufficient velocity will absolutely work when you're using a .440 round ball.

Some years back when I hunted with modern guns, everybody was buying short magnums ,long magnums, i even had one friend come up here with 416 Rem. I mean a big deer up here is about 150 lbs.. I stuck with my 7m Mauser and never lost a deer. I had to ask my friend if had ever been charged by an elephant up here!
You must log in or register to reply here.
Share:
Facebook Twitter Reddit Pinterest Tumblr WhatsApp Email Link