What makes a knife history correct. At one time all blade shapes have been used so how can anybody say it's pre 1880s or pre1750.
Are any of these designs pre 1840 design? How do you know? 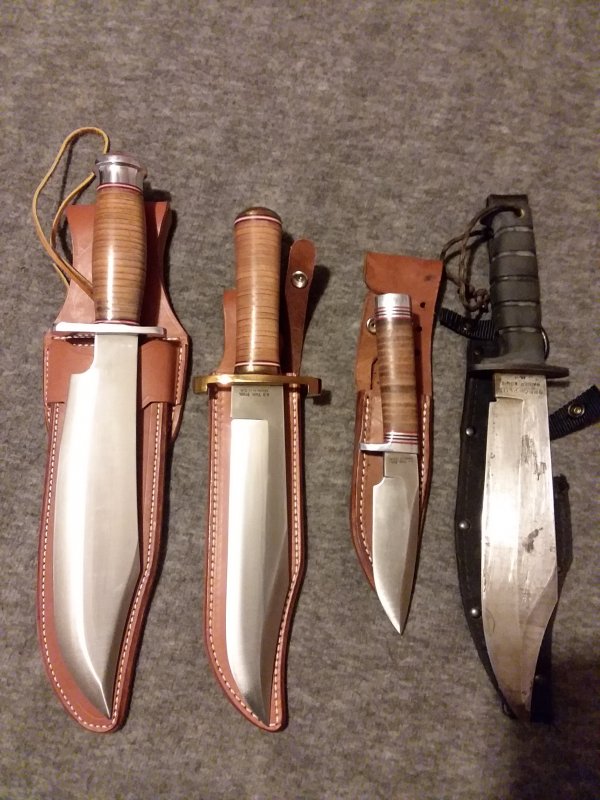 Other than the handle on the far right?
D

Are the two in the center Randall’s ?

Nothing with aluminium or plastic is HC.

Or a stacked leather washer handle.

bobthemotorcycle said:
What makes a knife history correct. At one time all blade shapes have been used so how can anybody say it's pre 1880s or pre1750.
Are any of these designs pre 1840 design? How do you know?View attachment 80779
Click to expand...

By the blade shape also. I’m not a knife guy and I don’t own a HC eighteenth century knife so I ain’t bragging here.
knifes tended to be shorter and thinner bladed. Drop points were seen in French knifes but gentler-slopes
Early’ Bowie’ style tended to resembled out modren French Chiefs knife, but thicker and edged on the top.
We have sax knifes that resembled Bowie style generically but in general those styles are post WBTS
A copy of Fire arms traps and tools of the mountain men by Russell gives hint to how deep in the weeds you can get in knifes.
his chapter on Knifes takes up about a fourth of the book and axes almost a third

As already stated no plastics, aluminum or stainless steel. most knifes of the time had plain wooden or antler scales with no bolsters or cross guards. Think "Old Hickory" and "Dexter" and you'll have the idea.

DOUBLEDEUCE 1 said:
Are the two in the center Randall’s ?

Grind and bevels make a difference for one thing.

This grind line is not seen on 18th century knives for example. A sledge on a knife would also be rare or not seen.
This may be due to blades being Thinner than our modern knives.
Handles would normally be pinned on tobtangs that were most often half tang or shorter. With English and French knives using different numbers of pins and different sizes from eachother. English trade knives often did not have the scales fitted to the tang on the belly side, a gap was left between scales where the edge of the tang didn't meet the edges of the scales.

Are you asking if you can’t take these to rendezvous or some trade event?
At most informal roadies no one is going to kick you out. A hard nosed event or a juried event would not want them displayed.
they are good looking knifes

bobthemotorcycle said:
What makes a knife history correct. At one time all blade shapes have been used so how can anybody say it's pre 1880s or pre1750.
Are any of these designs pre 1840 design? How do you know?
Click to expand...

So modern handles/grips not withstanding...,
You make an assertion that, "At one time all blade shapes have been used"..., well then to your premise, how do you know that?

How does anybody know?

As others have touched upon, they can only go by surviving examples and illustrations. Diderot's books are excellent sources for blade shapes, just as are recovered archaeologic examples.

Does that mean a blade shape that is undocumented for a specific era could NOT have been ? No of course not, but it's the duty of the historian to consider facts as information that is proven, not what could've been. It should also be noted that knowledge of one form of tech in one part of the world does not mean universal knowledge of that tech. In fact it's a quite curious phenomenon why folks widely separated yet having the same resources, don't develop identical material cultures....

You may also note that it may not be the silhouette of the blade that renders it "too modern" but the finishing touches and the steel that render it so. Reply #9 above pointed out a modern grind to the blade as a problem.

But beware of the mantra "You cannot prove it wasn't there, so it must be OK". Because that's sophistry, and leads down a very nasty rabbit hole.

I'll give you a stock example of something that easily could've existed in the colonial world of the 18th century, but so far as we know, it didn't.

So in the British Colonies of the 18th century, they had carbon steel, and charcoal, and chicken, and broccoli and onions and rice and olive oil and salt, and pepper, and garlic, and even red pepper..., they even had contact with the Far East..., but, you never find any mention of stir frying food in a hammered, carbon steel wok (or any wok for that matter), and you don't find any colonial cooking books, or early American cooking books, with stir fry chicken and broccoli recipes. ALL of the necessary ingredients (OK so maybe not soy sauce) were in the colonies, and trade could've brought over the soy sauce, and sailors could've seen an Asian man or woman using a wok, and Asian men and women could travel, so the sailors wouldn't have needed to go all the way to China to see a wok used to make stir fry..., yet...., I think everybody would agree that a person at a historic site during a colonial history event, using a Wok to make stir fry chicken and broccoli, while absolutely possible, would be incorrect to tell people it was an authentic colonial dish in the British Colonies.

So if I stir fry my broccoli & chicken in an iron skillet …….
A

And NO white or red or other color decorative spacers, either.

smo said:
So if I stir fry my broccoli & chicken in an iron skillet …….
Click to expand...

it's not just the tech..., that combination of ingredients isn't documented cooked in that manner.

Well, I know it's not a knife, but it is a blade I made about fifteen years ago...just thought you might like to see it. And yes, it is SHARP. 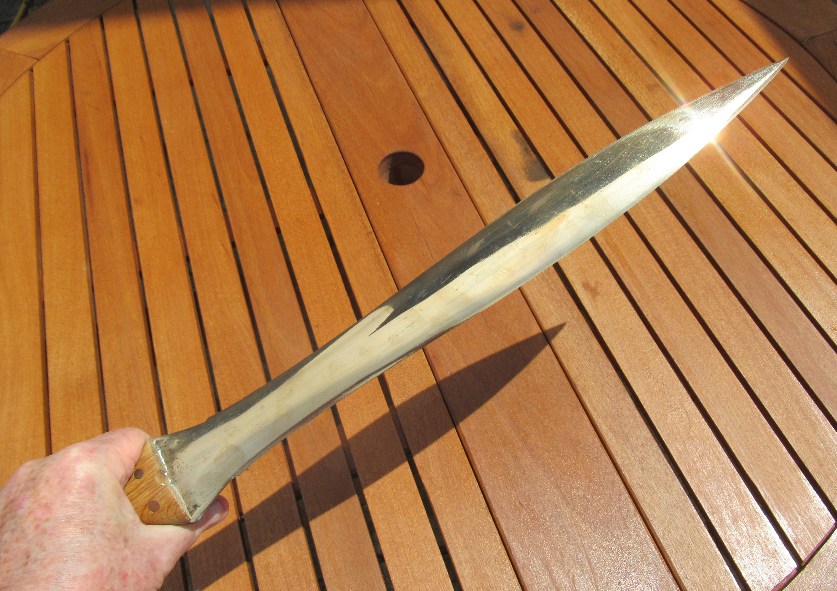 The biggest difference appears to be in the handle materials & design.

Not an answer but a question of my own, if you don't mind? How did you get the black coating off the Ontario's blade, or had that been done before you bought it?

bobthemotorcycle said:
What makes a knife history correct. At one time all blade shapes have been used so how can anybody say it's pre 1880s or pre1750.
Are any of these designs pre 1840 design? How do you know?
Click to expand...

"What makes a knife historically correct? "

I would suggest first that a historically correct knife would be made as a serious attempt at duplicating the materials, design and construction of a knife from history. Second, that knife should be of a type known to be associated with the people and the place of interest during the time-frame of interest.

"At one time all blade shapes have been used..."

I will agree that a lot of blade shapes have been used over time, but that's a pretty broad subject. I do think we can associate some blade shapes with some time periods. For example, it is my understanding that the deeply curved skinning knives that we see now were virtually unknown before the 1870's. I have probably done more of my research into trade knives than Bowie-type blades, but I have gotten the impression that spear point blades were probably more common than clip points in the early19th century. Like this Green River Bowie (now in the Smithsonian) by the John Russell Company:

Are any of these designs pre 1840 design? How do you know?

I don't think any of the knives in your photo are of a pre 1840 design. I have done a lot of research and reading about old knives, and I have never seen anything like those associated with that time frame. I may have missed a few, but I'm confident in saying if they existed at all, they would not have been common. Composite handles, like the one on the far right, are definitely late 20th century. I don't know when stacked leather handles first came out, but the oldest ones I recall seeing may have been from the 1930's. Aluminum was scarce, and was actually considered a precious metal long ago. I don't think we had a practical way to obtain it until into the 20th century.

I'm sure we are all wondering what prompted the questions, which is none of our business, but we still wonder. Is this just for the sake of discussion? If so, that's fine. We love discussions! If it is an effort to determine whether any of those knives are appropriate for reenactment, we hate to disappoint, but I don't think any of those would "work" for anything prior to the mid-20th century. If you

However, if you are looking for a period correct knife, the good news is that there are people on this forum who can fix you up!

The biggest difference appears to be in the handle materials & design.
Click to expand...

Unfortunately, again depending on time period, there isn't much indication of homemade or even local blacksmith made knives being all that common. Trade knives and such were so readily available. We often forget, backseat many of us like making our own stuff, and we now have time to do so, that during colonial and early American times we were very much a consumer culture.