Does anyone just put a pinch of powder down there just in case there is an ember? If not, then just dump in the rest?

Does not matter if using powder charges in aluminum foil, or cloth. You ALWAYS worm and mop between every shot to make sure there is nothing hot inside the bore, before you put in a fresh charge.

The 16 inch battle ship guns also had a mop go through the barrel from the breech to muzzle after each shot to ensure nothing was in there that could set off the powder of the next.
(also any other Naval gun that didn't use self contained shells)

Yes, there is a danger of something hot enough to set off the powder charge when loading.
That is why worm and mop (with a dripping wet, not simply damp, mop) are the first two steps in loading.
Click to expand...

Wait a minute.... so when I go hunting for the day I gotta carry a pitcher of water and mops?

Other than on the battlefield and cannon is there any historical evidence that those procedures were conducted with small arms during a battle and or by the hunting fraternity?

I don’t remember the passage, late eighteenth century England about a young man who shot himself when a load cooked off, he had failed to blow down the barrel, the article said.
On a battle you had to get shot off fast. I doubt hunters needed to.
A pause will do it. When hunting I use a spit patch to swab with chewed like gun so as to be be just damp.
But....I’ve loaded lots with out swabbing.
Speed is the device of Satan
Take a moment for what ever you shot to die, look and enjoy Gods beauty around you. There is no redcoats coming after you. You’ll not get a cook off.

I've been through many loading drills for my King's Musket. There is no set of commands to retrieve mop, dampen mop, wipe bore, and recover mop. Then retrieve cartridge...

In the artillery, the large amount of powder along with there being no cannon ball to create pressure to minimize burning embers at the breech. The large quantity of powder will heat the barrel up quite a bit and with the use of an aluminum foil wrap for the powder pretty much ensures that some foil will remain in the breech. There is good reason to run the worm. Often foil is recovered. The mop is used to dowse any embers left. The aluminum foil wrap provides a water resistant barrier to any water left from the mopping that hasn't dried.

Needless to say, Artillery has a different set of safety considerations.
S

Cannons are not rifles, cannon accident are irrelevant.

The only rifle AD's I know of were while loading were with paper cartridges that were rammed as wadding.

A club I am aware of requires swabbing between shots, including revolvers. IT causes lots of trouble with failure to fire malfunctions. Failure to fire and hang fires are definitely a safety issue. If you are going to wipe, use a patch on a slotted jag that is nearly dry. IF you put water or oil before the powder you will have a safety issue.

Excellent point on embers in the breech passages.

I completed the two day "Cannon School" at Castillo de San Marcos in St. Augustine a few years ago. This was a Spanish cannon firing drill, with all of the commands in Spanish, and all members of the crew in period uniform. After firing, the worm (sacatrapos) went in first, followed by a dripping-wet mop (la lanada). Frequently, the mop would pull out more debris than the worm. Most of this was foil, from the wrapping on the main charge. It seemed to adhere to the wet mop.

I was at the range today and paid a lot closer attention to my loading procedures, even though I am always very careful. Good thread, thanks guys. Good reminders for all.
4

ugly old guy said:
The 16 inch battle ship guns also had a mop go through the barrel from the breech to muzzle after each shot to ensure nothing was in there that could set off the powder of the next.
(also any other Naval gun that didn't use self contained shells)
Click to expand...

Sorry, but I must call B/S on this statement. The only swabbing on the 16"ers was a wool fleece sleeve to the chamber only. They did have an air ejection system for the remaining propellant gasses. Source, USS New Jersey 1985-1987.

These guys did all that prep. 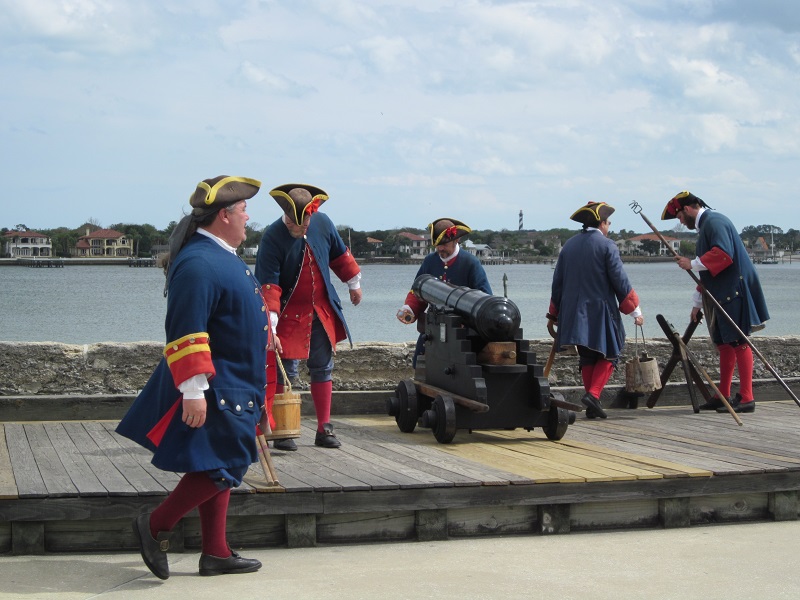 Reading letters and journals from the ACW, especially the battle of Gettysburg, you'll find several instances of soldiers firing their rifled musket so fast it began to Cook Off. In each instance the soldier simply dropped his musket and picked up another laying close at hand. One soldier I recall went thru 4 rifles on Little Round Top.

When I'm not competing I don't swab between shots. I've never had a problem, I use a horn and measure. That slows down the process opposed to pre-measured charges.

I personally don't think it's a big concern...stepping on a rattler at my farm is a much more likely occurrence.
T

Britsmoothy said:
Wait a minute.... so when I go hunting for the day I gotta carry a pitcher of water and mops?

Other than on the battlefield and cannon is there any historical evidence that those procedures were conducted with small arms during a battle and or by the hunting fraternity?
Click to expand...

Good question. In battle the chance of getting killed while messing around with a swab is so great that not doing it was considered worth the risk, except maybe in the case of artillery which should be wormed and swabbed with a 3 minute delay between shots. I once rammed a charge on a Napoleon cannon made from a piece of modern 5" Naval gun, and the powder bag broke open about 4 inches from the breech. The safety Lt. ordered the charge, 1 1/2 pounds of powder, dumped on the ground at the muzzle and watered with canteens. The next shot fired, but the powder on the ground ignited, and the resulting fireball was about 8 feet in diameter. I was unharmed (#1 man) but my daughter working on a piece 3 guns away said it looked like I was fried. The heat from it was unreal. After that, the powder had to be dumped on a cloth and dragged far to the rear. If there had been a spark in the bore when the bag broke, I would have lost my right hand.
Last edited: Feb 19, 2021

I have been doing this since 72 and I have shot with hundreds and hundreds of people. I have never seen this happen. Safety is always # 1.
Nit Wit

I develop my loads with intention of not having to wipe for 10+ shots, and will reload using safety practices that in the event there was an ember that ignited my powder while being poured from my measure(only) it would likely be inconsequential to myself, and others nearby....It’s never happened to me or any others I have shot with over 45 years....I think we each have our own level of risk tolerance based on our experiences, practices, and influences.

While reenacting, I never saw one. The one I did have was during live rapid fire with a smoothbore and again, it was traced back to a dirty breech that was not cleaned properly.

In live firing minies, I never wipe between shots. If your charge and lube are in balance, wiping is not needed. I've run well over 50 shots before without wiping but the minie system was designed to do exactly that. The one thing I emphasize here is to leave the spent cap on the nipple and to properly maintain the gun. The previous charge has removed virtually all oxygen. That's why artillery uses a thumbstall to cover the vent while all ramming is done. By keeping the vent blocked, it makes it nearly impossible to bring a possible ember to ignition.

I've seen a youtube video of a reenactor shooting a bess (I think) loading with paper cartridges. He was slam loading, his ramrod stuck in the ground, and as he loaded the fifth round (I think) it appears to cook off before he got it to shoulder. The crowd just ooo'ed and awed.

Most reenactor videos on utoob are comical at best and downright wrong at worst.

I don't normally wipe a bore until shooting for the day is over and done. I also tend to blow down the barrel after each shot. If I ever have my rifle fire two consecutive shots without reloading, then I might change that. Generally at the range I get off maybe 20 shots in a two hour trip. In the hunting woods I turn on the afterburner and manage a reload in 5 to 10 minutes. These days I don't have to worry about finding an arrow in my wishbone or a Brown Bess musket ball going through my mind. I've yet to see a deer totin' a pistol.

Yeah, it's kinda hard to mop a 65 foot long bore between shots.

i wasn't in the navy but from the military tv program i saw on the big naval guns was they used gun cotton as a propellant, not black powder and that may make a difference in any bore embers.
You must log in or register to reply here.
Share:
Facebook Twitter Reddit Pinterest Tumblr WhatsApp Email Link