a great find, for sure! What happened at the muzzle? looks sort of 'lopped off.'

European parts shipped here in the 18 century were assembled by local gunsmiths to create guns like this, and were sometimes called smooth rifles. Longer barreled versions would be called fowlers. The style of the lock and trigger guard are English, the stock is in the style of Lancaster Pennsylvania, from roughly the 1770 time period.
You did very well with your purchase, though I'd be tempted to re-shape and maybe even carve a nice piece of wood like that. This is a pic of a similar one I made using German parts. 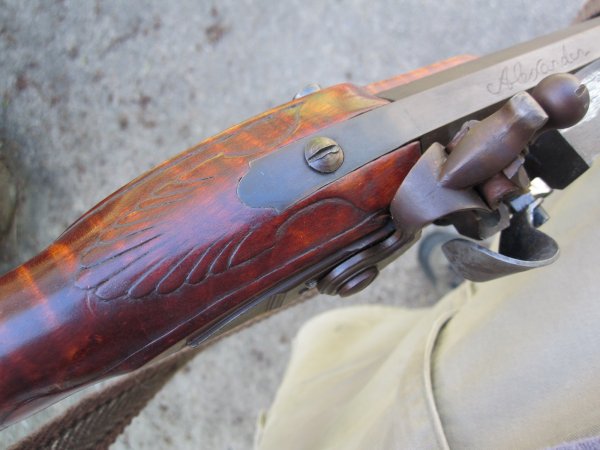 You should probably know that we all hate you... I think you made a great find there. Every once in awhile the stars all line up right. I wouldn't touch a thing other than cleaning her up and then time for shooting.

Wulf, I believe it stands for Local Gun Shop.
Robby

I had posted a reply but it doesn't show now.
T

wulf said:
Would you please tell me what LGS stands for ?

I agree, he made a good purchase. And, I would leave alone other than to use. BTW, is it an octagon to round barrel?
R