Well i got my Traditions Woodsman today...

deermanct said:
Not long ago, I bought a new, old stock Traditions Tennessee rifle.
The clean out screw on mine is stuck....
For me it's a nonissue. I always remove the nipple when I clean the fire channel and use pipe cleaners to get in there.
Click to expand...

You hit the nail on the head !!
Leave that screw alone and run a pipe cleaner down thru the flame channel from the nipple hole to the breech after the nipple is removed.
Safe and simple and no chance of boogering up the little plug screw slot.

People who own one of the later made Thompson Center sidelock guns don't have an option. Thompson Center stopped drilling the flame channel from the outside of the barrel so they don't even have that stupid screw.

GreenSmoke said:
I do my own work on my modern firearms, so if i need to use my clean out screw to appropriately clean it, ill be alright, im just unsure whether it is actually a cleaning screw on my model, or a cosmetic screw that actually screws out the entire drum/bolster. And if i find myself needing to remove the drum, I'll get that handled as well, i am just so new to this style of firearms that i dont want to go twisting any screws until i know what i need to do.

So i should make sure that my new nipple is screwed in until it is quite tight (not tight enough to strip it obviously, but until it wont go any further.)
Click to expand...

Factory nipples are never the best and better ones are an immediate suggestion. Get either a stainless steel or bronze replacement nipple. Spitfire, Treso, both good, dependable aftermarket brands.

A piece of guitar string makes cleaning the flash channel easy. The brass wound A or D string make the bend into the barrel easily. Its stronger than pipe cleaner and the brass winding cleans the hole nicely. The thinner core wire makes a great nipple pick too. I keep a piece of it in a the patch boxes of my cap guns.

SDSmlf said:
That’s great. But OP is in the learning stages, taking the first steps just like rest of us did at one time. This is NOT the time to play with the so-called clean out screw and add one more opportunity to have a problem. Enough going on with no bang first time out. Very troubling and disappointing to a new shooter. You may not of ever had a problem with this screw, but many have. Just my experience and opinion.
Click to expand...

Apparently shooters who remove the nipple during the cleaning process are not competent to remove and reinstall a clean out screw.

FWIW, I agree that if a clean out screw cannot be easily removed then just as well to leave it alone. Surprised that a screw in a new rifle cannot be removed!
F

When you have time, do a bit of research on black powder; the size grain (#F) and which is recommended for what caliber and use; & it's handling properties. There are excellent threads here on all of these.
Caution is wise but it's a lot less touch than some of it's popular reputation.

Welcome to the Dark & Smokey Side.

longcruise said:
Apparently shooters who remove the nipple during the cleaning process are not competent to remove and reinstall a clean out screw.

FWIW, I agree that if a clean out screw cannot be easily removed then just as well to leave it alone. Surprised that a screw in a new rifle cannot be removed!
Click to expand...

Most have a nipple wrench to remove and install the nipple, pretty straight forward. It seems that more often than not, if there is a screw head on a gun messed up and the gun is a percussion with the the so-called clean out screw, it’s the clean out screw that is messed up. Why? Might it be relatively small threads in a potentially hostile environment, with a screw made of low quality steel and a small slot for the screwdriver to fit, if it fits at all. Maybe if replaced with a hardened set screw with a hex head, or a larger head..... The OP states he is brand new to the game. His first attempt to remove the screw didn’t work. Why mess up the screw head on a brand new gun. Nothing to see here. Just my opinion.

Messing up screw heads is pretty much the result of using a screwdriver that doesn't fit the screw. That and trying to remove a screw that has been left in place through many cleaning operations and is now corroded in place.

Like I said, if it is corroded in place, best to leave it alone.

New to blackpowder. Not new to screws.

GreenSmoke said:
I tried to take that screw out and it was absolutely refusing to budge. I got some oil on it right now, might try the screw again after a while. Its really does look it is just milled out of the same piece of metal as the drum, likes its a fake screw
Click to expand...

Have got the screw out?

My Renegade "clean out" screw has been stuck since I inherited the rifle. No idea how long before I got it. IF it was removable I would take it out each time I cleaned just so it would stay removable. I would apply anti-seize or Teflon tape to it. Since mine is stuck, I have never removed it. I feel it is best to just leave it alone rather than bugger it all up trying to get it out.
I clean with the bucket of water method and have never had ignition issues related to a dirty flame channel. I do make very sure the flame channel is dry after I clean.
IdahoLewis has a video of cleaning a TC flame channel with a handheld steam cleaner, it looks like they work fabulous, just FYI.

While I can't claim to be in the dry ball club as of yet (this is like the two kinds of motorcycle riders, those that have laid it down and those that are gonna), I do regularly pull loads after hunting so I don't have to do a full cleaning. I find that a ball puller with a bore sized brass ring above it to keep in centered in the bore, as well as a screw in palm saver, make for much easier threading the screw into the ball. I don't ever have to tap the rod to get it started since I can put quite a bit of downward pressure on the rod with a palm saver while twisting it.

longcruise said:
Messing up screw heads is pretty much the result of using a screwdriver that doesn't fit the screw. That and trying to remove a screw that has been left in place through many cleaning operations and is now corroded in place.

Like I said, if it is corroded in place, best to leave it alone.
Click to expand...

Only one of mine does not come out and that one was that way when I got it, used.

I got my cleanout screw removed just fine, let some oils soak into it from both ends over a night and got screwdriver with a massive handle for extra torque. I nearly gave up, if it wasnt going to come out, that was fine I'd leave it, no biggy. But the owner booklet advises i should take it out for cleaning each time, and i could see from inside the drum that it definitely was a screw and not just an aesthetic machined part of the drum.

I put this screw towards the top of the overly tightened for no reason screw pile. When i got it to move finally it released with a loud pop, like it was halfway through becoming one with the drum. Threads are fine though, no issues.

It is MUCH easier to get a look actually into the fire channel into the breech. Something i hadn't previously realised, is there is a small section down there that appears to be a, for lack of term, powder pocket. A little section thats smaller than the bore of the barrel that goes down to get to fire channel, which i would assume is supposed to fill with powder, but is definitely too small for a ball to be pushed into. Its a hard guess as to how long this smaller section is while looking down a barrel, but i would guess maybe 2 or 3 inches. I've never seen this represented on diagrams or mentioned in discussions yet (similar to how i hadnt come across the terms bolster and drum yet).

That smaller section is supposed to be like that, yes? It seems like a potentially dangerous design to me, could create an air pocket between powder and ball. But i suppose it probably fills entirely with a small powder charge.

The breech that you have is the New CVA style breech as seen in the pictures below. Its their design and its been in use by CVA/Traditions for more than 40 years. 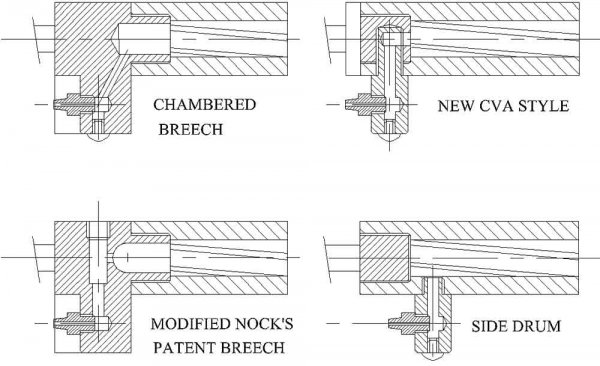 The chamber is quite small and can easily be filled with black powder fouling causing misfires and hang fires if you are wiping between shots with an overly large jag and patch that pushes fouling down the barrel. Some people when target shooting use a very damp patched ball and the damp patch pushes fouling down on top of the powder charge and the fouling gets shot out the barrel.

Nice info, and yep, its definitely that new CVA style. I thought when i saw it that it would probably foul and be a huge pain to clean. Would it be feasable or a good idea to find what size of brass brush would fit in there on the end of my range rod and have that around incase i need to get some bad fouling out of there?

A brush that fits the reduced chamber is needed to clean that chamber. A 22 caliber brush wrapped with a cleaning patch or a 30 caliber brush.

Grenadier1758 said:
A brush that fits the reduced chamber is needed to clean that chamber. A 22 caliber brush wrapped with a cleaning patch or a 30 caliber brush.
Click to expand...

I wish the owners manual would at least show this aspect of it. I feel like that area could be a serious problem for a new shooter very soon after they start shooting, end up fouled down there, and if you never look down the barrel youd never know that your cleaning jag isnt reaching the full bottom. Thankfully i think i already have compatible jags that will hopefully match threads.
M

I cleaned my CVAs for years not knowing about the patient breech and have never had a problem.
S

I also shot a CVA when I started and had trouble when I was told to clean with the waterless method, I had to use hotter and hotter caps, first magnums and then rws1075. When I started to clean with water my trouble disappeared and I could use regular caps again.
R

Traditions had a problem with nipples about ten years ago but thought they had alleviated that. They were hard stainless steel and would chip and splinter. Mine splintered into about 3 pieces. Have not had a problem with any replacement nipples ever since. Frontier's post about the hammer and nipple alignment being off is another common issue with Traditions or CVA guns. That can be easily remedied however.
You must log in or register to reply here.
Share:
Facebook Twitter Reddit Pinterest Tumblr WhatsApp Email Link