With a request from a local farmer to shoot some pigeon and crows that were causing damage to his spring barley drilling, I decided on a few hours one afternoon . Arriving at the field by 1pm there was a few birds feeding and quite a few moving in the wood a mile or so away ,has most pigeons at this time of the year 3 pm is a main feeding time . By 1.45 I was set up with my hide and the decoys were placed to the left and forward of me with the wind blowing from me to the decoys , When decoying these birds field craft is most important you need a least a 15 to 20 decoys placed so the birds will cross either left to right in front what is known has the killing zone . You will find that when decoying pigeon and crows there is many variations of shots such has a left and right crossers the high divers to the decoys and also the unexpected that come from behind such has going away birds
I decided has there had been a lot of talk on the over and under I decide to give one of a pair an outing using a load of 2.3/4 drms of FFFg with 2 1/8 cards over powder to 1.1/8 oz of number 6 shot and a1/16 card over shot I settled in for a afternoon sport .Before I had properly settled in the first bird came it was a easy bird from left to right which I missed not properly swinging through an was behind . After missing a couple of birds shooting behind it was now time to get into the swing through ,and after that I began to kill my birds most shots you remember but on this day there was one that stands out and 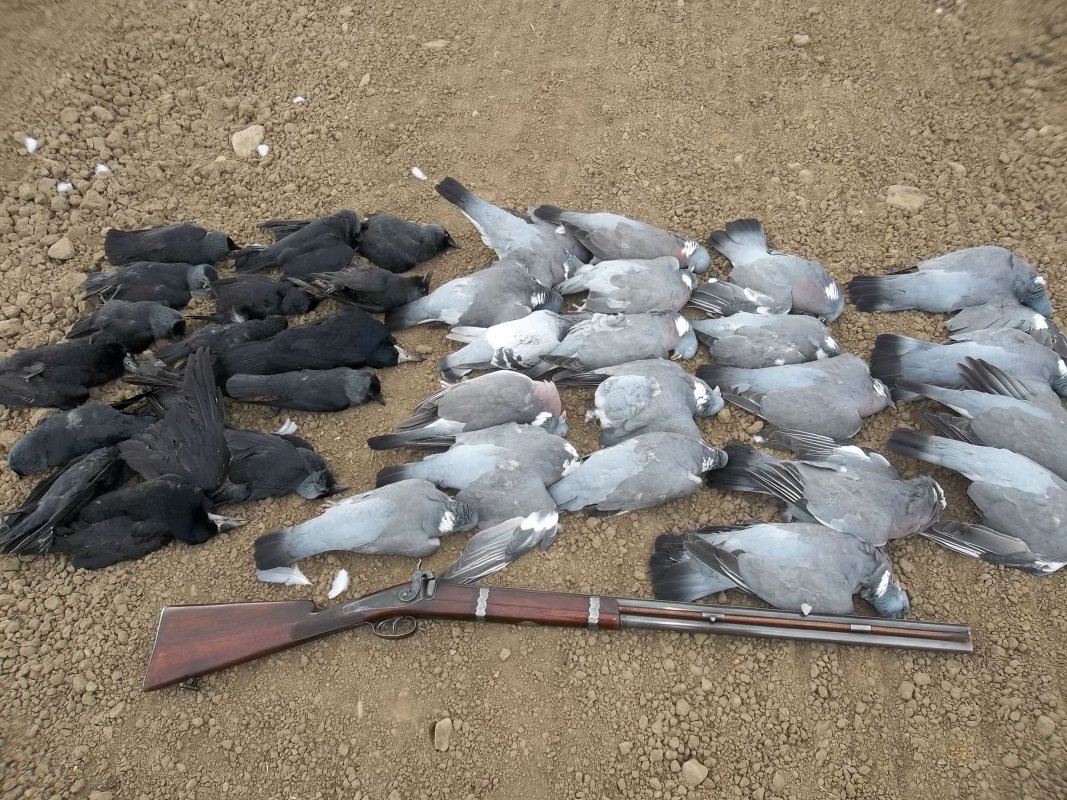 was a pair of carrion crows , these birds a very territorial
at this time of the year and I could see them sitting on the tree tops in the wood , I called them a few times using my caller and they responded and came to the decoys calling and screaming at the decoys and proved a simple left and right shots Carrion crows at this time of year do a lot of damage to birds nests and also attack new born lambs picking out their eyes and tongues . By 4.30 I decided to call it a day I counted the bag which was a mix of 45 head not bad , pleased with the over and under no misfires and no swabbing .
Feltwad
J

That is a bunch of loading and shooting. Did you even make a dent in the population?
F

jdw276 said:
That is a bunch of loading and shooting. Did you even make a dent in the population?
Click to expand...

For both crows and pigeons you never make a dent in the population even if you shoot over 200 in an outing .
Feltwad
T

Feltwad,
Sounds like you had a great day of shooting. Thank you for posting the story and taking us along!

Not for me I would say not many eat crow those that I shoot go into the disposable furnace if there are any that I cannot find Mr Fox will find them on his midnight travels . Now pigeon are different for the time of the year these birds were fat and had been feeding on young rape and barley drillings ,I only breast them and put so many in a bag and freeze them and when to use they can be made into casseroles or pigeon pie and have a not too strong gammy taste and a just right flavour.
Feltwad

I’ve eaten plenty of pigeon over here too. Used to have landowners request we take them out of the old farmyard (homestead) building long since abandoned. They are great eating! Now crow, not for me.
Curious, would this hunt be classed as a “proper sporting hunt” by your (English class) standards?
Walk
F

Walkingeagle said:
I’ve eaten plenty of pigeon over here too. Used to have landowners request we take them out of the old farmyard (homestead) building long since abandoned. They are great eating! Now crow, not for me.
Curious, would this hunt be classed as a “proper sporting hunt” by your (English class) standards?
Walk
Click to expand...

I think I must explain this type of shooting and the birds involved . You mention pigeon in old barns , these we class has homers or feral birds , those in the image are wood pigeons which most are residents but we get a lot that emigrate here in the winter from Europe , the crows are jackdaws , rooks and carrion crows , these are all pests and this type of shooting is known has pest control no doubt it does involve plenty of sporting shots .
A sporting shoot proper is where the quarry is game birds such has pheasant, red grouse ,partridge , wood cock etc these are walked up and shot over pointers or setters ,but most are shot has driven birds this is where beaters drive the birds towards the guns , these birds come at varied heights up to 60 yards if they have the wind in their tails are like rockets and the lead in front is vast with several yards. Finally for those that shoot wild fowl on the marshes and the sea shore mudflats this is known has fowling this is where the big 4,6,8 bores come into the own both single barrel and double which can bring down geese up to 60 yards If decoying geese on barley or wheat stubbles then a lesser bore size will do the job . Hope this has explained the difference ,
Feltwad
Driven pheasant 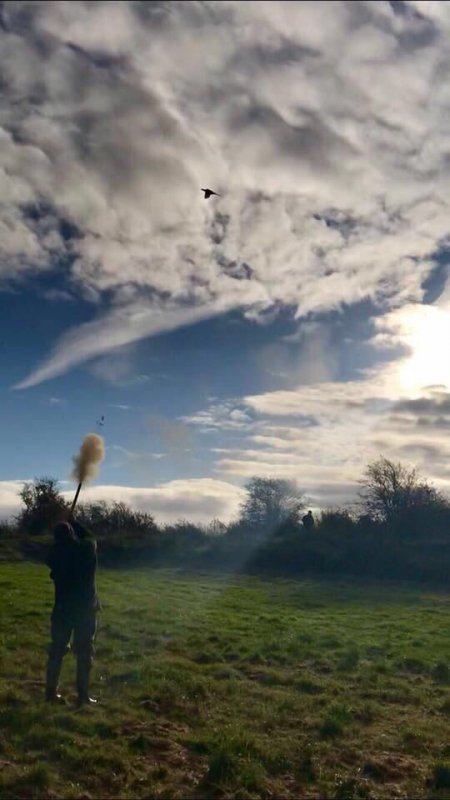 Thanks for the explanation. I was curious if using a blind (hide), decoys and calls to take birds was still considered sporting. I hadn’t realized that sporting is solely about the shot and not the rest of it. I was born in Southern Saskatchewan and grew up waterfowling over decoys in field settings. Absolute pure fun!!
Thanks
Walk

Great timing of the picture above, my compliments to the photographer!
F

zerosprk said:
Great timing of the picture above, my compliments to the photographer!
Click to expand... 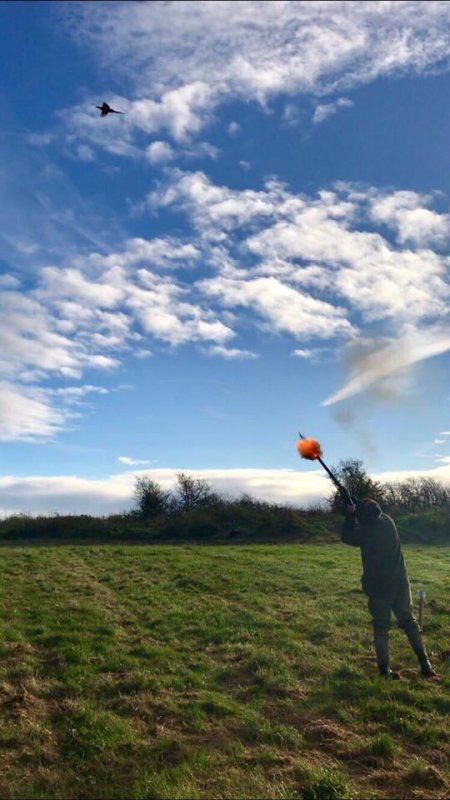 Sure looks like a fun afternoon. Thanks for the story and pictures.
Percy

Most farmers that get pigeons in their barns are very happy if you shoot them. I use my 20 ga Poor Boy, but with no choke the shots have to be close. After a few shots the pigeons vacate the area and won't return for a few hours. If you hunt the same farm day over day they can figure out that the guy carrying the gun is someone to avoid and most will leave promptly.

Those two photos are really good. Now I've eaten crow on a number of occasions but NOT the bird.

Funny about the crow eating, when a kid we would bait starlings too shoot, there was a guy who paid us a nickle each for them guess he liked starling pot pie, and keep us in money for shot shells.
T

I once watched a TV show with Andrew Zimmern, he was in North Carolina. A lady took them on a crow hunt, after the hunt was over they breasted the crows stuffed them with a jalepeno and wrapped them in bacon. They grilled them over charcoal and everyone complimented the chef.,
C

I've been watching videos lately about crows and other birds in your part of the world that peck out the eyes, eat the tongues of the birthing lambs, and even peck on the laboring ewe's belly in an attempt to get at the unborn lambs. I cannot recall ever hearing that this is an issue in the States, but maybe it is? I don't blame the fellas using CF rifles to ruffle the feathers of those dasturedly birds hanging around the sheep during lambing season.
F

Christophero said:
I've been watching videos lately about crows and other birds in your part of the world that peck out the eyes, eat the tongues of the birthing lambs, and even peck on the laboring ewe's belly in an attempt to get at the unborn lambs. I cannot recall ever hearing that this is an issue in the States, but maybe it is? I don't blame the fellas using CF rifles to ruffle the feathers of those dasturedly birds hanging around the sheep during lambing season.
Click to expand...

You will find that this type of pest control is more so in the dales and moor hillside here it is mostly grass and sheep these birds which are carrion or Scobie crows are more alert and can spot trouble up too a mile away so the modern rifle is the most used . I have decoyed these crows using a dead rabbit but once again once you are in a hide which nearly always is back of a stone wall you must sit there and not move . Calling them is a art although you can buy a crow caller but I prefer my own mouth call, you will find that when they come they stop short at a 100yards of the decoys too see if is safe to come the rest of the distance one wrong move and they are away . It is best to let them come right to the decoys which should be no longer than 25 to 30 yards before showing yourself, although a big bird they can suddenly increase speed either to the left or right making good crossing shots
Feltwad
You must log in or register to reply here.
Share:
Facebook Twitter Reddit Pinterest Tumblr WhatsApp Email Link