I notice that on a lot of muzzle loading barrels there is a "usually silver" plug on the side of the barrels at the breach. Anyone know what these are ? Thanks.
O

Hi oldwood and thanks. I am looking at original old guns both percussion and flintlock. Fluid and Damascus barrels.
L

These are vent plugs and have tiny holes in the center. When a percussion cap explodes, the flame from the cap pushed the air ahead of it and in a closed breech compresses it. If there is enough air space (ie the powder charge did not completely fill the chamber) the air could be compressed to the point it would reject the flame. POP--no Bang. The vent holes in the plugs give that air an escape and improves ignition reliability. Some call them blowout plugs but the plug won't actually blow out.
D

Thanks Oldwood. I am having difficulty taking onboard that there is a hole so tiny it cant be seen and which will not block on the first firing. If there was such a hole how would you keep it clear. You even have to use a pricker on the percussion nipple.

If the plug is in line with the touch hole on a flintlock, it could be plugging up the hole that was used to form a Nock's Patent Breech. Notice in the picture below, to make the anti-chamber, a larger hole was drilled and plugged. On a single barrel gun it would be like the lower barrel in the picture. 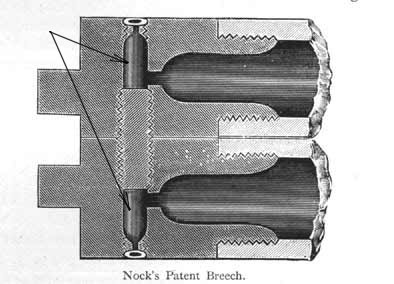 Even if the gun didn't have a true Nock's Patent breech, a hole will be drilled thru the bore to the opposite side to remove some of the wall material where the touch hole is drilled. This makes for a very short touch hole which improves a flintlock's reliability.

In the case of a percussion gun, the plugged hole may be the remains of the drilled hole that connects the base of the nipple hole on the opposite side of the barrel, to the bore of the gun.
Thompson Center and others drilled this connecting hole from the nipple side of the barrel and plugged it with a screw that many people call, "a clean-out hole".

edit: Blow Out Holes:
I don't know of any gun maker who would intentionally install a "blow out plug" in a barrel. It doesn't take much imagination to realize that any type of "blow out plug" would be very harmful to anyone standing in line with it when it blew out of a overloaded barrel. Besides that, in the days that the original guns were made the metallurgical properties of the iron used to make guns varied making it almost impossible to calculate and build a plug that would be safe with normal powder loads but would blow out if excessive pressures were encountered.
In other words, I think the idea of a "blow out plug" is totally wrong.
Last edited: Sep 26, 2020

DUNKS said:
Thanks Oldwood. I am having difficulty taking onboard that there is a hole so tiny it cant be seen and which will not block on the first firing. If there was such a hole how would you keep it clear. You even have to use a pricker on the percussion nipple.
Click to expand...

I agree, most of them back in the day were on shot guns, and were made of PLATINUIM.
F

Great! We both know now. Thanks all for the replies.
L

DUNKS said:
I am having difficulty taking onboard that there is a hole so tiny it cant be seen and which will not block on the first firing. If there was such a hole how would you keep it clear. You even have to use a pricker on the percussion nipple.
Click to expand...

Addendum to my previous post--vent plugs were usually found on high-end (expensive) guns. Some lower-end makers would inlay a very thin platinum disc at the vent plug location to emulate the high-end gun. These inlayed discs would not be drilled with a vent hole. The vent holes would be about .020-.030" in diameter and are visible if present.
D

Thanks Larry. No I said in an earlier post that the seller thought the gun to be Belgian, but the proof marks are English and the Name Sherwood which is engraved on the action belongs to a Portsmouth gunmaker around the 1840s So the gun will be Birmingham made
R