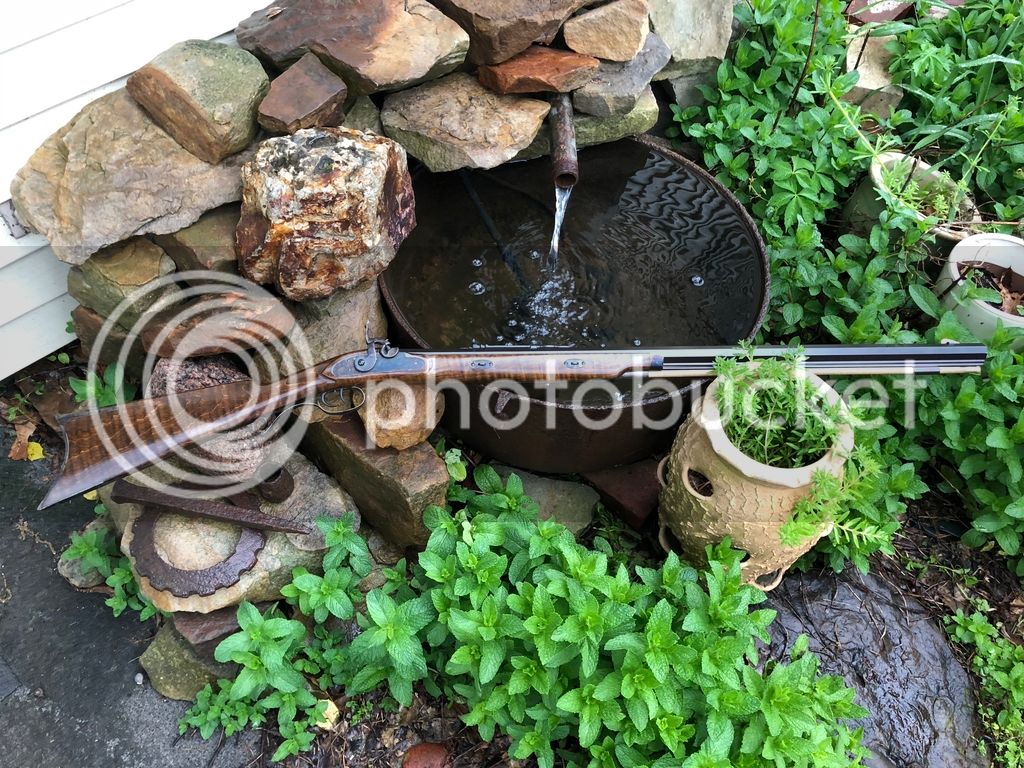 I like this better than my GPRs. Beautiful wood, fit and finish.
R

That rifle is a real beauty.

THAT is a beautiful rifle!
I have a couple of Lyman GPR rifles, great shooters, and nice enough, but nowhere close to the Pedersoli Rocky Mountain rifle.
Please take a few more pictures and tease us.
Fred
J

First shot with it.

Does the gun have a patent breech?

Being Italian that's almost a given.

The original Hawkens used plainer maple and had browned iron, no case hardening. Also those sights are much more elaborate than those found on the originals.

Still much better looking than a GPR but also at twice the price and from all reports not necessarily a better shooter.

Pedersoli does make nice guns! I have the same one and the fit and finish is great. I haven't shot mine yet. I don't want to scratch it up. LOL
Let us know what kind of groups you get with it. :thumbsup:
F

Smokey Plainsman said:
Does the gun have a patent breech?

Being Italian that's almost a given.

The original Hawkens used plainer maple and had browned iron, no case hardening. Also those sights are much more elaborate than those found on the originals.

Still much better looking than a GPR but also at twice the price and from all reports not necessarily a better shooter.
Click to expand...


What is wrong with a patent breech?

"The original Hawkens used plainer maple and had browned iron, no case hardening. Also those sights are much more elaborate than those found on the original:


The original Hawkens were a working man's rifle, who used their rifle everyday in that time period? I would rather have nice wood and upgraded sights in this day.

Mine was in the first container when they were shipped to the U.S., nice rifle, really like the front silver sight in low light.

"from all reports not necessarily a better shooter"

Can you provide a source of your reports?
J

Thanks for kind words, folks! All I wanted to do was show off my latest muzzle loader. That’s the spirit of my post. After being on this forum for 10 years and only 85 posts I don’t think I come across as a know-it-all.
I never intended to suggest that this is an exact copy of any original Hawken rifle or that it could outshoot a GPR. After 45 years of shooting flinters and cap snappers I’m well aware of what old originals looked like.
I do think this is about the most beautiful firearm I own and I’m super proud to have it. Sometimes I just like to get it out of the gun cabinet and fondle it!

Nice gun. Definitely a step up from the GPR as far as fit and finish. The only GPR I currently own, like most I have been around, took quite a bit of barrel break in before it started shooting as well as the Pedersolis I have had did out of the box. Overall, I believe worth the money. Enjoy it.

A bit off topic, but like you, don’t understand the negative comments because you ”˜like’ your Pedersoli better that the GPR. Much could also be said about the GPR, but no one asked for anyone’s opinion. Have been a member here for about dozen years (with very low post count) and some seem to be getting bolder with their comments lately, as Zonie as mentioned a few times recently.

Anyway, looking forward to seeing the sources for the shooting reports Richard E requested. Did a quick search myself and didn’t find much.
M

Yes, it is a very nice rifle with real nice wood. Most of mine have brass hardware but I prefer the toned down darker hardware. If you are happy with it, then that is all that matters.
J

Now it feels like we’re sitting around the campfire. I need to take this rifle to the range for some more serious shooting at paper. Something measurable. My shooting time is divided up by my flintlock and such. I’ve only blasted a few plastic jugs just for kicks but it sure seemed to hit right where I was aiming from about 30 yards. My first shots were with dry lubed pillow ticking and .530 balls. 70gr of fffg Goex provided the boom. That long heavy barrel reminded me of shooting my Pedersoli Sharps silhouette rifle. The front sight really sticks to the target.

Have both brass and iron hardware guns. Prefer aged/tarnished look with brass. Have been playing with color case hardening and fire bluing for iron hardware. Lighter rust bluing rubbed back for the barrel. Whatever the finish, prefer the ”˜used’ but not necessarily abused look. Personal preference.
M

SDSmlf said:
Have both brass and iron hardware guns. Prefer aged/tarnished look with brass. Have been playing with color case hardening and fire bluing for iron hardware. Lighter rust bluing rubbed back for the barrel. Whatever the finish, prefer the ”˜used’ but not necessarily abused look. Personal preference.
Click to expand...

I feel that way too. I have no use for purdy tools that I am afraid to use because they will get a ding or a scratch. I don't abuse them but they do get used and you can see it.

So when will you go live with this one? Have to figure out if it will it be just pretty or pretty and practical? Always enjoy shaking down a new toy.

That's a fine looking rifle and something you can be proud of.

It's been pointed out on this thread and some others that this forum seems to be taking some unfortunate directions. I second that motion. There's been some unnecessary negative comments, a few personal attacks, and a lot of off topic discussion. But what I think is the biggest shame has been a general dumbing down on a lot of posts.

There are too many misstatements and down right errors being passed off as facts. It's almost as if some people get all their information from the internet.


Smokey Plainsman said:
The original Hawkens used plainer maple and had browned iron, no case hardening. Also those sights are much more elaborate than those found on the originals.
Click to expand...

Smokey, I don't mean to pick on you, and obviously I mean nothing personal, but you appear to have made a comment that you probably heard or read somewhere on the internet and repeated it here as fact.

One of the truisms about Hawken rifles is that it is very dangerous to make rules or absolute statements about them. The brothers operated the shop for about 30 years and others continued the operations for almost another half century. During that time, all types of rifles were produced. 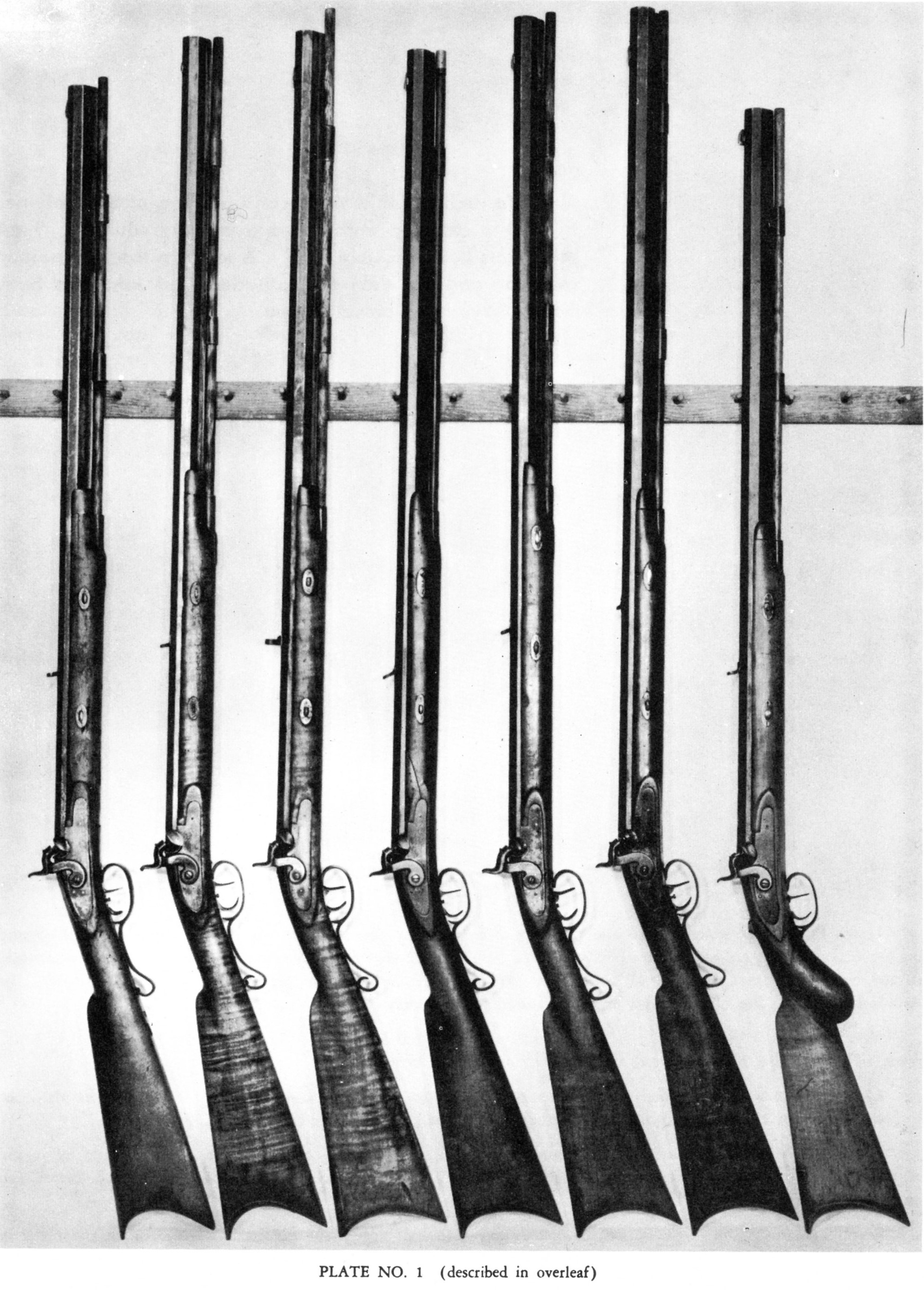 There are pictures of other Hawken rifles with fancy wood in Baird's books and in Jim Gordon's books.

The few surviving Hawken rifles that still exhibit some original finish suggest that color case hardened iron was more the rule than the exception. These photos of Kit Carson's last Hawken still show the case colors on the lock, hammer, breech, tang, and trigger guard. The butt plate was also case colored along with the nose cap. 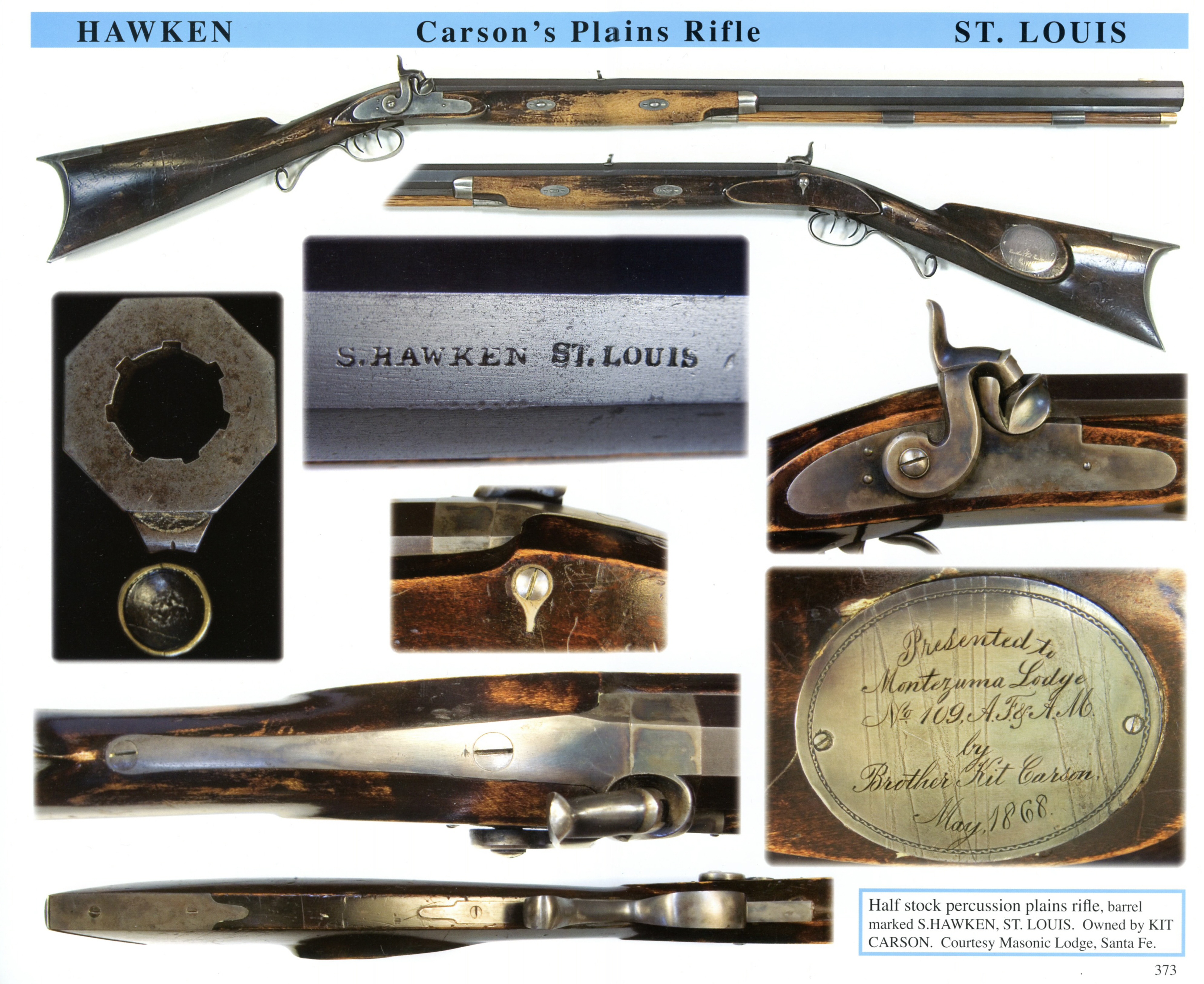 The barrel on the Carson Hawken still exhibits some of its original blue. It was either rust blued or charcoal blued.

Don Stith once owned a pre-1840 J&S Hawken that was written up by George Shumway in the August 1988 issue of Muzzle Blasts that also retained most of its original finish. It had case hardened iron parts and charcoal blued barrel, also.

The brown iron we see on Hawken rifles today is probably the result of decades of rusting and acquired patina.

Steel was expensive during the time that the Hawken brothers were building rifles and used only for springs. An inexpensive steel making process wasn't invented until 1855 and not put into full scale production until about the time of the Civil War.

Soft iron was used for barrels, locks, butt plates, trigger guards, and etc. on muzzleloaders right up to the beginning of the cartridge era. Parts that were subject to wear like the lock, hooked breech, butt plate, etc. were often case hardened to resist wear.

You need to add the qualifier "most" in your statement. There is a S. Hawken marked rifle with a very similar adjustable sight and several Gemmer era rifles with adjustable sights.

This image is from Baird's second book. 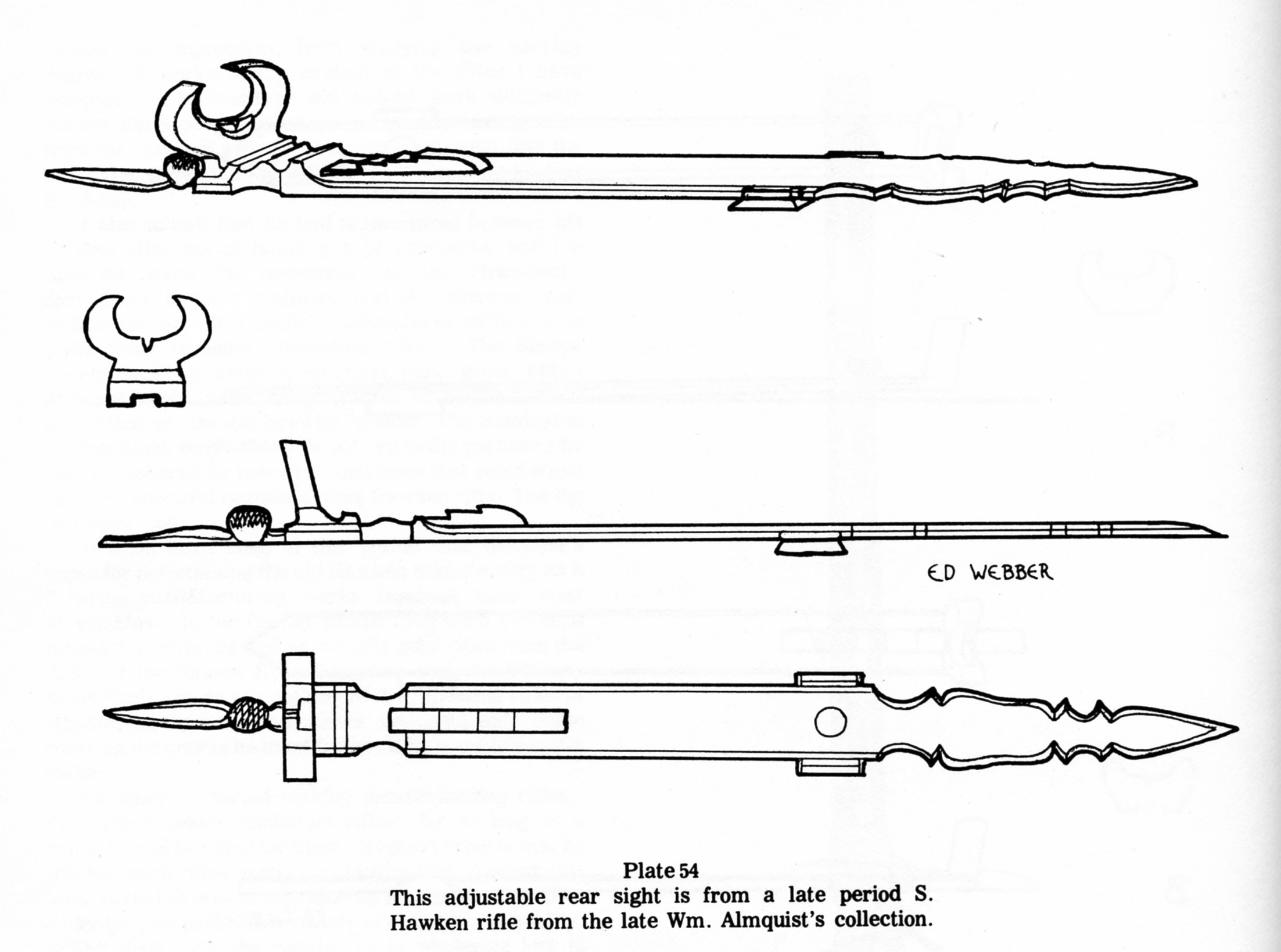 Everything on Jaegermeister's Pedersoli Hawken can be found on original Hawken rifles.

If I had the rifle in front of me, I could probably find some small things to nit pick, but the metal finishes Pedersoli got right.
J

I see that Kit was a fellow traveling man.

Thank you Mtn.Meek, I'm sure glad to be at the same fire as you.
M

Great info. I'm sure allot of us are guilty of passing on misinformation because we are passing on what we heard rather than actual facts.

Right to Left handed, a quandary of Cheek rests.