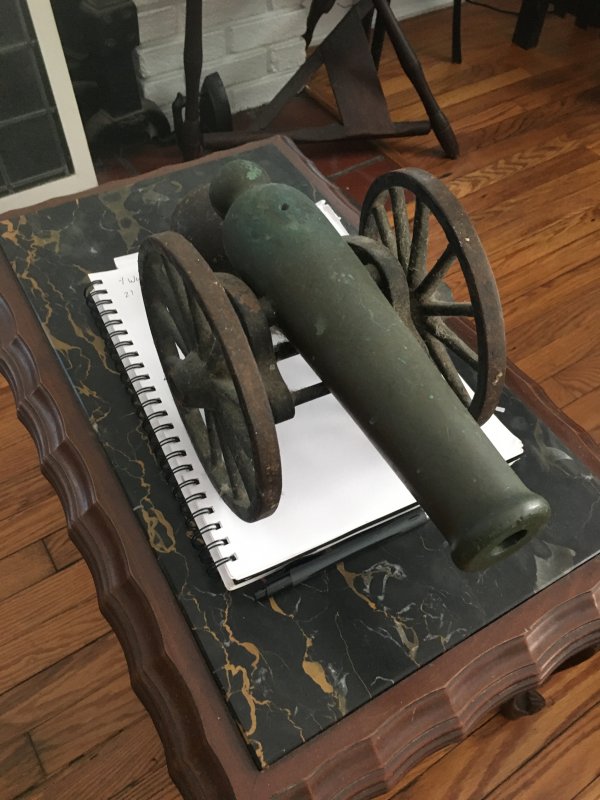 Yeah, didn’t see any markings anywhere. Ideas or directions to head in would be great. Thx in advance. 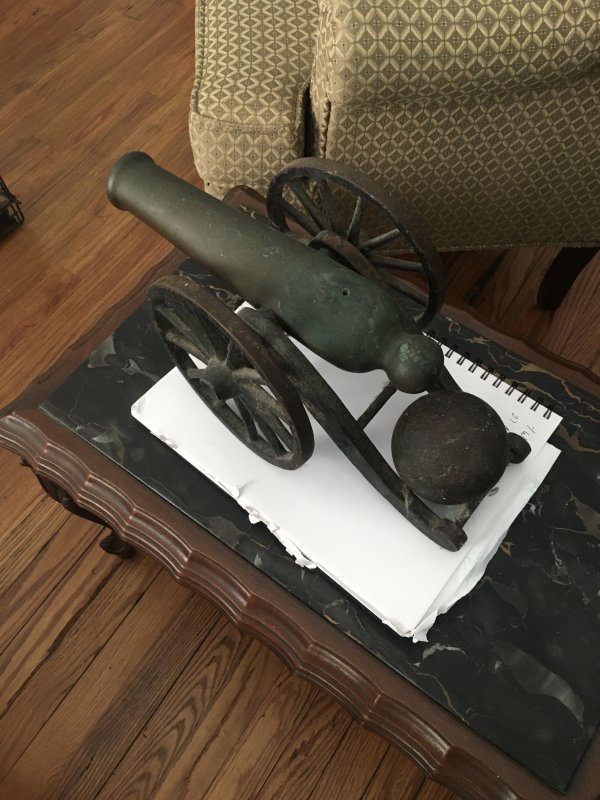 The cannonball pictured is not for this cannon. I feel the cannon could fire as it is sturdy and heavy. Just requires bravery.
B

Looks neat. Given the ball is so much bigger it seems it might have come with a twin and used for book ends on a shelf. Does not appear to have burn marks around fuse hole to indicate it has been used. Does the bore go all the way back to fuse hole? If not then it's an ornament.

I have a couple cannons that size. I have fired them only with blank loads, usually on July 4. Yours does not show an elevating mechanism indicating, at best, it was a signal cannon. Or, as suggested, a decorative piece only.

I really don't think this cannon is pre 1865 so, I'm going to move this thread to the Cannon section of the forum.
E

Didn't Dixie sell something like this way back in the Day?

"B39-12 MODEL CANNON KIT:
This He-Man size kit is made of bright yellow brass, not polished and you assemble it yourself. All you have to do is polish the brass and drill for the screw holes, bore out the barrel which can stand up to a 3/4" bore. The kit consists of one barrel, two wheels, and two tail sections. The wheels are 6" tall and the barrel is 9 1/2" long. Total weight of the outfit is 16 lbs. Be sure to include sufficient postage to your city. This is a fine looking outfit when completely assembled and nicely polished and certainly well worth the price. The only item you have to furnish to complete this cannon kit is the long bolt that goes through the two tail pieces as illustrated in the photograph.

I know I've said it before, but back then old Turner was a Voice in the Wilderness....
E

Nice cannon, maybe .50 caliber? I would shoot it with a mild load of BP,maybe 20-30 grains of 2F and a patched RB, plenty of thickness in the barrel from the picture. I bet the cannon ball on the rear of the carriage is there for ballast to keep the cannon from jumping around when shot.

Beauty of a little cannon. Load her up and go boom. I rember the first time I shot a cannon at a lake fesival, WHOOH, my ears are still ringing.

I have several small brass/bronze cannons, two from Dixie and one from Peach Bottom foundry. None exactly like that.

Take careful measurements of the inside of the bore and then compare to the outside. A reasonably safe rule is at least a bore size thickness all around the bore for breech thickness and wall thickness. the barrel looks beefy, but I can tell from the picture if there was drill run out when it was bored or for that matter how thick the breech material is around the cascabel. between the bottom of the bore and the narrow part between the barrel and the ball at the end. (That is where the full size Ft McHenry cannon was too thin and separated) Are the trunnions straight through or cast as part of the tube?

I shoot blank loads with powder and muzzle loading shot gun wads. Some people pack in paper, or whatever. Heard of so much paper being packed down a barrel that is acted like a bore obstruction. When I first fired my 1.25 inch bore cannon, I used a 1.25 wad punch to punch out thick leather wads from a piece of saddle skirting. I poured the powder and then put in the fuse and then rammed two leather wads down the bore. the air jetting out the fuse hole pushed the fuse out. so I stopped, reset the fuse and then much more slowly rammed the wads down. We fired it from the top of the hill on my farm. at dusk. We could see a giant 15 ft diameter smoke ring hovering about 40 ft out from the muzzle. We could see porch lights go on and folks coming out onto the porches all around expecting a fancy aerial fireworks display. We fired three more and my buddy noticed a police car with flashing lights racing along the top of a hill a few miles away. The cop was heading toward a dead end at the top of that hill and there he stopped for a few minutes, like he was looking for where we were located, The smoke was laying in a flat cloud over the hollow be that time. We just decided we did not need any hassles and packed things up. Heard a week or two later that a woman claimed her window had been broken by the boom and she called the cops. Now her house is about a half mile from where we fired and it was a rickety old farm house that was directly in front of us.. I seriously doubt we broke her window.

There was a big re enactor who was the former Mayor of Lancaster PA. he had several original full size cannons and a cannon get together at his farm in the southern part of that county. My farm is 12 miles as the crow flies on the other side of the river, and I can hear the cannons going off at his farm.

If you do fire your cannon, make sure that when you do, it can't roll anywhere. Was at a range near Davidsonburg MD, decades ago and a guy was shooting his little "Old Ironsides" style cannon. The loaded it up and had a firecracker fuse sticking out. The guy leaned against the loading bench when he struck a match. He shoved backward from the loading bench when he got back. Well the loading bench wobbled enough that the cannon rolled backwards and fell off the bench pointing back at the guys van. Yep it went off and right through the widow of his new van. (Don't know if he had Firemans' Fund Insurance, it would have been in one of their ads I suppose.)

zimmerstutzen said:
Heard a week or two later that a woman claimed her window had been broken by the boom and she called the cops. Now her house is about a half mile from where we fired and it was a rickety old farm house that was directly in front of us.. I seriously doubt we broke her window.
Click to expand...

Don't be so sure. We had a very surprising incident at our house about a year ago. My wife is a serious bell collector. Almost all beautiful glass and fairly expensive. In our hillside house (walk out basement) is our finished TV room. On the wall facing the excavated Ozark rock is a concrete wall with studs and plaster board finishing. I was sitting in the room one day and heard a loud boom and felt our rock/concrete room shudder. Two large hanging shelves with about 100 bells just sorta jumped off the wires they were attached to the was with and came down breaking every bell. We tracked the sound, not hard as we are fairly rural. On a property approximately one mile west of us, and beyond a 50 foot cliff, that property owner had shot a charge of tannerite. That is what made the boom. Destructive a mile away. Being a difficult thing to prove we could not file criminal charges or insurance claims.
You must log in or register to reply here.
Share:
Facebook Twitter Reddit Pinterest Tumblr WhatsApp Email Link