I bought one from smokingpipes.com a couple years ago.

Not sure if you’re a pipe smoker in every day life, but smoking a clay pipe is very different than briar or meerschaum. The bowl gets HOT and you need to hold them by the stem or in my case by a little nub on the bottom of the bowl.

The actual smoke itself is nice and cool though, and they’re a pleasant smoking experience.

Townsends sells reed stemmed clay pipes. Or you can try Pipes and Cigars Another option is pipeshoppe.com I've bought several clays from the last vendor listed.

I haven't looked before posting this.
I know I have seen longer stemmed clay pipes amongst the wares of various settlers I shop.
Try:
The Quartermaster General,
Smiling Fox Forge, and
Turkey Foot Traders
Are the 1st three I would look too.
I know I saw a mote impressive selection of period smoking pipes somewhere, but I am drawing a blank beyond those three.

Penn Valley Pipe Shoppe is where I got mine.
T

back after ww2 when I was a young kid me & my friends used to go to the small town candy store and buy then for a nickel. and we didn't smoak them we used them to blow bubbles with them. never thought of ever smoking them. I remember that they came in a very flimsy wooden box, about 12x12, and were laid in it like spoons stem to bowl, and to keep them from breaking they were packaged in saw dust. they had an embossed TD, on the bowl witch the old timers in the village that smoked them said it stood for TRAMP'S DELITE! and along side of the stem GERMANY. and the old timers that lost there teeth used to wrap seweing thread or an elastic rubber band on the stem so they could grip it and not swing around in there mouth. just thought you younger guys would enjoy that little bit of my child hood good times? btw. my little town at that time had about maby 100+ OR - people. GOD, those were the days, no crime, you could leave your doors unlocked & car keys in the car!
T

Check out Samson Historical. I just purchased several clay pipes from them and they were superb. I smoke clay pipes Dailey and go through them regularly. These are the best I have purchased. They also have a YouTube video on clay pipes. Worth a look.
Cheers, Doug T aka "Two Pipes"

So having smoked these for 30 years, I'd advise staying away from the really long stemmed "tavern" pipes. They are fine if you leave them at home, only smoke them there, and put them up in a rack when done.

They do NOT travel well.

What you want is one with about a 7" to 9" stem IF you want the cooling effect that one gets from a "church warden" pipe. Most of the clay pipes out there are actually 19th century styles, if that matters. They tend to have shorter stems and textured bowls. I would not pay more than $15.00 for one, and closer to $9.00 would be ideal. I do smoke a straight stemmed, shorter stem, clay pipe from time to time. They are more durable, and most folks don't know they are too "young" for me to have had them in a British AWI camp.

IF you must have a church warden then I'd recommend one with a reed stem. It will last a lot longer.

OH and when the clay pipe gets too dark with tobacco juice, let it rest a week and dry out 100%. Then you place it on the hot coals of a hardwood campfire, and let the heat "cure" the pipe for you. Gently remove it with a pair of sticks, and set it aside to let it cool, and watch it, as it's super hot even after it has stopped glowing. Let it fully cool and then you can smoke it.

Had to chuckle at that. On the steamship Arabia they had a hundred clay Reed stem pipes and two hundred stems.

I have several reed stemmed clay indian trade pipes dug up at the site of a factory on the Ohio river. I bought these from an old timer who kept the exact location a big secret. Some have faces, others just simple decoration. I used to smoke them and found the reed stem handy for holding as they don't get hot like clay.

Clay pipes were certainly a very popular trade item. Traditional styles are not hard to find. In addition to the sources noted above, I know Crazy Crow, Jas. Townsend, and Wandering Bull have them.

As @Loyalist Dave pointed out, the long-stemmed pipes do not travel well. They didn't travel well back in the day, either. Lots of broken pipes and pieces have been recovered from archaeological sites.

However, I suspect some efforts may have been made to salvage some of the broken pipes on the frontier. The image below may illustrate that point. The picture shows William Wentworth-Fitzwilliam, Viscount Milton (second from the left) and Dr. Walter Butler Cheadle (middle) with their Assiniboine/Metis guide, Louis Battenotte (second from the right), Mrs. Battenotte, and their son (far left). Milton and Cheadle traveled all of the way across Canada, from Quebec to the Pacific coast of British Columbia, in 1862-1863. Dr. Cheadle wrote a book about the adventure, entitled The North-West Passage by Land. This illustration is from that book: 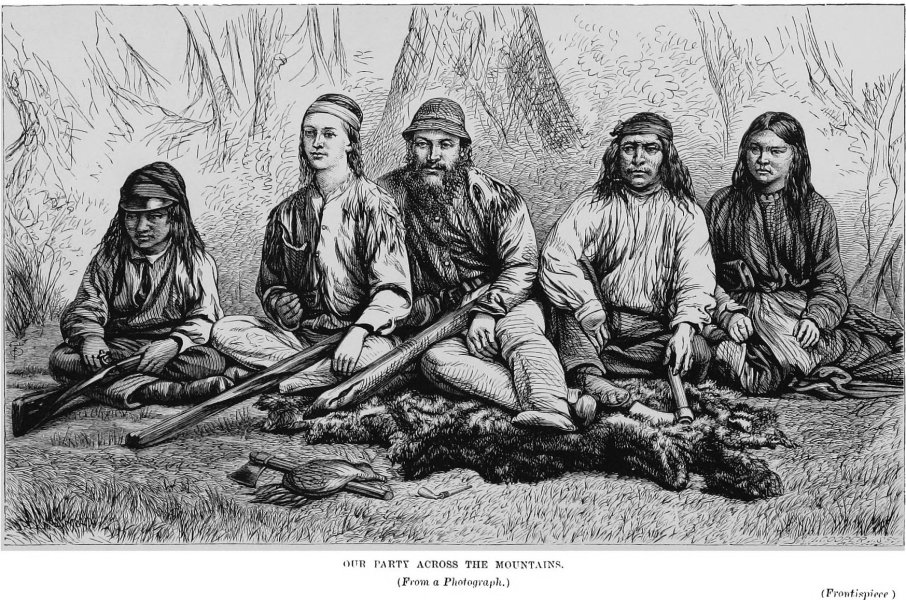 If you look right dead-center in the foreground, you see this: 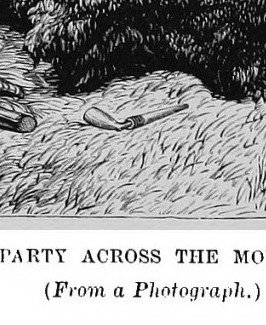 That looks like a common clay pipe bowl with a very short stem, inserted into an elongated secondary stem. This was probably a pretty simple "fix" for a clay pipe with a broken stem. Making a replacement stem of wood could be accomplished without much trouble. I know for a fact you can burn the pith out of a sumac sapling with a hot wire in just a few minutes. For shorter stems, you can just use a gimlet... No heat required. The gimlet will follow the path of least resistance, which would be the pith. One end of the wooden stick could then be reamed out a little larger to admit the clay pipe stem, and you're back in business.

In addition, the broken stems were not necessarily discarded. The jagged ends could be smoothed up, after which they were strung and used as beads. There is an interesting monograph on this topic right here: Clay Pipe-Stem Beads in North America. This practice likely began in the early 17th century and continued into the 19th, although it was evidently most common in the northeast. I made some stone pipes with wooden stems some years ago, but I don't smoke any more and don't have any clay pipes on hand, broken or not. However, I thought at one time I might try making some pipestem beads, and reasoned that surely a few of the new pipes, imported from overseas, must get broken in shipment. Retailers must find a few broken ones in their shipments, I thought. So, I contacted a couple of sutlers and asked if I could buy some broken pipestems. Nobody responded. I'm sure they thought I was nuts.

I found my 7" clay on eBay....It carries very nicely in the short starter loop on my shooting bag strap.

Now if my memory is correct; there was an intact original tavern pipe mold they had found in the river Thames. A company had copied the mold and now makes exact reproductions of these 17th century pipes. I haven’t since been able to determine just which company accomplished this, but I would imagine they would be the truest to the originals. Old German offers great pipes at decent prices though. 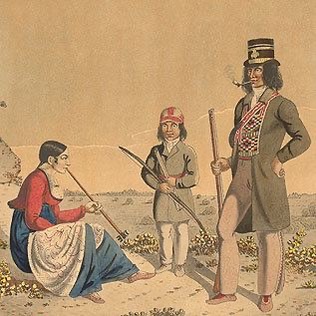 This was painted by Peter Rindisbacher, circa 1820, and shows a long pipe and a short clay pipe. The little boy appears to be wearing something like a baseball cap. It's amazing what you come across when you go down a rabbit hole like this.
Thanks for all the information. I'm going to order a short one, instead of a "Church Warden."
T

I guess CLAY IS THE WAY?
T

Interesting thread. I don’t smoke and have never given a thought about a clay pipe but enjoyed reading about them.

Long pipe, story goes it was smoked in church, and a warden could light it for you from a brazier. The long stem was so to could be reached easily from the aisles without disturbing the other folk on the pew.
Also called a tavern pipe. One would smoke in a tavern. Then break off a bit of stem so the next smoker had a clean pipe.
Church wardens are private, tavern are shared.
Honest, I just doubt both these stories but sound nice.
The longer the stem the cooler the smoke. So I think it just got to be used when a smoker could just sit and smoke. As opposed to guys who worked with a stem in their mouth and needed a short one. So travernsor churches gave a chance to have a cool relaxed smoke.
Last edited: Sep 20, 2022

Thanks for all the information. I ended up ordering a "short" clay pipe from Penn Valley.
There's a lot of good information on this web site:

The Alex Henry and Clays