This is a pistol we've had in the family for a number of years. From what I've been able to gather from my own digging is that its a british naval pistol of some sort. Kind of thinking the dating is around 1760, but i'm not exactly the most well versed when it comes to this kind of stuff. The Makers Mark says T. Richards, the lock itself is broken at the sear on the inside and missing the top half of the lock jaws (Sorry for my poor terminology)

My family likes to refer to it as a 'Pirate gun' due to the the handsome face on the butt of the pistol. I've seen examples of that same face on other pictures i've seen, curious what kind of significance it has overall. Any information on this would be very appreciated. Thanks! 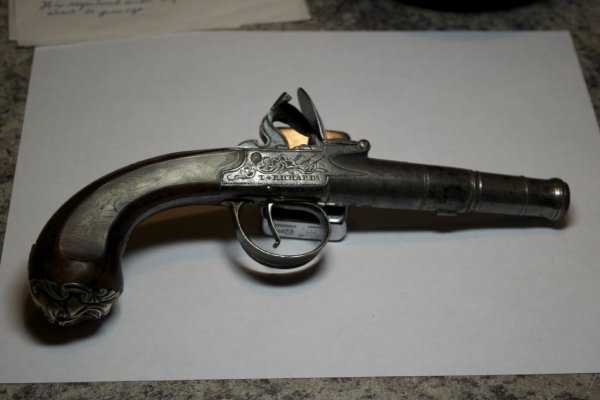 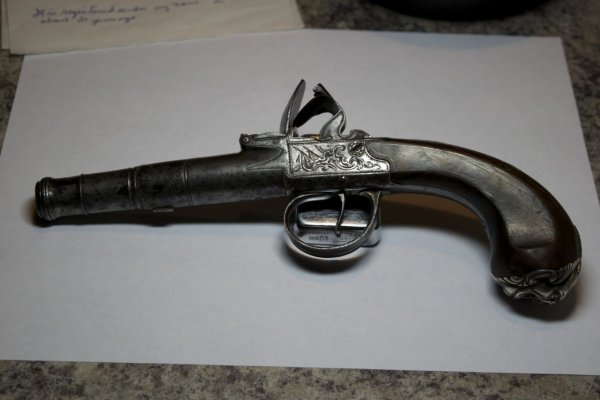 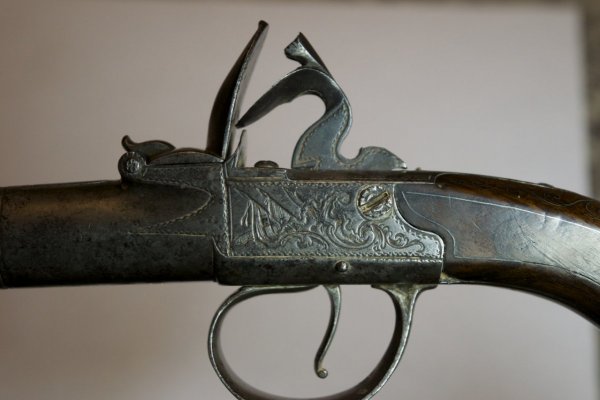 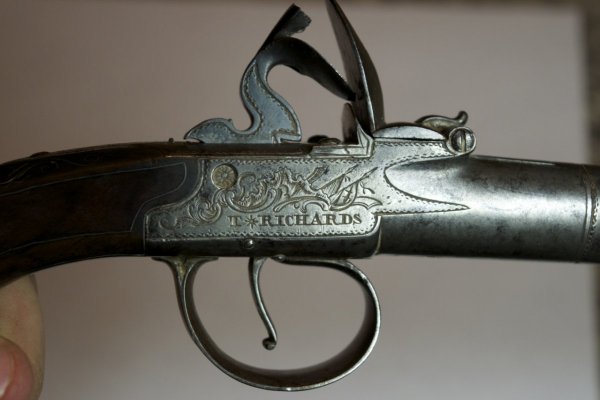 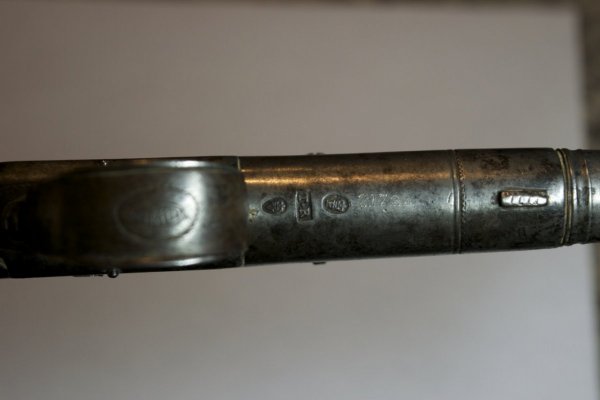 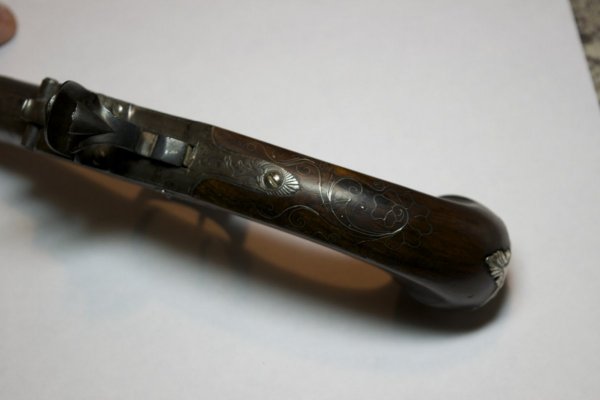 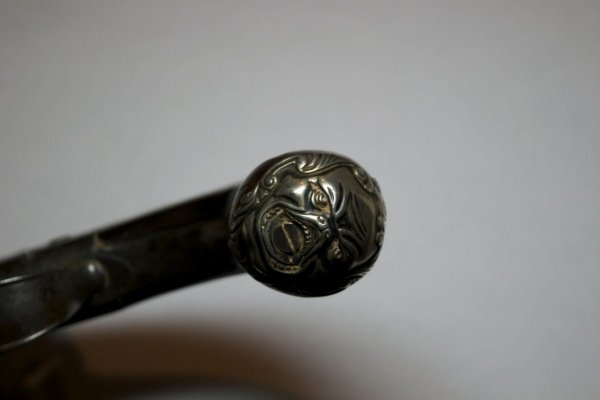 That is pretty nice. It is a turn barrel job. A key fits around the barrel, and over the lug underneath the barrel to unscrew it.
You can easily make a new top jaw. You can even make a new screw. You just need a drill press, or steady hand with a hand drill, and some files... and patience.
T

The butt is called a 'grotesque' or 'mask' and is the part that meets the head of the villain after the shot has been fired - if necessary. It is therefore simply a reinforcement in case of enforcement . Apart from that, it is has no significance. These masks were often in the form of a Moor, simply because in those days anything vaguely exotic would be a selling point. Without it in place, clobbering a miscreat might have resulted in a broken butt-end.

It's a very nice piece of history but is unlikely to ever have had anything to do with the navy or a pirate, although, of course, we will never know!

To load a turn barrel, first the barrel is unscrewed from the gun. Then the chamber is filled with powder. Then the correct sized ball is seated on the chamber. The ball is slightly larger than the bore. Then the barrel is screwed back on. This is a personal protection gun, notice there are no sights. Probably carried in a pocket for close up use.

Hi,
The maker was probably Thomas Richards. He worked in Birmingham until 1779. He would proof some of his barrels in London and mark some of his work as London made. The style of the pistols could easily be from the 1760 - 1775 because there is no frizzen spring adjustment screw located on the top of the pan cover and it looks like the frizzen spring is recessed and contoured to be flush with the breech. Thomas was also a silversmith and could have made the silver hardware. There could be hallmarks on the butt mask although not always with Birmingham production. The hallmarks might help date the gun and identify the silversmith. It has no obvious connection to naval use. The grotesque butt mask was used on many pistols throughout most of the 18th century. It is called a box lock turn-off pistol and was for personal protection. The design allowed it to be carried in a coat pocket. These were very powerful pistols for the designed powder charge because the ball was larger than the bore and fitted against a shoulder in the barrel much like a modern bullet. As otheres noted, it is a breech loader and you unscrew the barrel to load powder then ball in a chamber.

I'm sure that mentioned actually shooting this kind of pistol a while ago. Here in UK it has to be registered on the owner's FAC so that it can actually BE fired, if not, then it's a free to anyone to own, but to buy you must be over 18. The pistol I shot was not a named' gun like the OP's is, but it was well-made, London-proofed and of an astonishing .54 calibre. Loading it has been described above, and this one took about 18gr of 2Fg, then the ball balanced on top and the barrel replaced. It was also percussion. Shooting it was a real experience - if felt just like a short-barrelled .3*7 M*g*u*, and the ball had no problem clearing a nice bit splintery hole in a backing sheet of half-inch Marine ply and off into the backstop. It would definitely have done the biz on anybody standing in front.

Not the correct part, but for reference the top of the cock (hammer) on your gun looks to have been cut also.

Thanks for the replies everyone! I would love to fix this thing, but it might be a lot more work than just replacing the parts. The body of the cock is broken inside, a quarter chunk of the material within is completely missing where i'd imagine the sear would be, so the whole hammer may have to be replaced, which i doubt is much of an option at the moment.

It being a screw off barrel is news to me, but it makes sense! I always wondered what that little nub on the bottom of the barrel was for. Sadly, I don't have the key piece either, unless its buried among all the stuff my late grandmother has. She was an antique collector/dealer, so who knows where it could be.

Thanks again for the information!
C

Nice little box lock turn off pocket pistol. It is in fact the mark of Thomas Richards of Birmigham and the piece was produced there. He also had ties and some sort of office in London.
R

That's not a Moor its Harold Wilson. of , "I promise you '' ''.And I think I said that at the Brighton Conference " Fame . He retired from being Prime Minister and became a model for a door knocker company. Rudyard
You must log in or register to reply here.
Share:
Facebook Twitter Reddit Pinterest Tumblr WhatsApp Email Link