There ya go. Now, I'm not trying to pick on you. I just found that there is something about those that made me put it back in the rack. Its a real great looking gun. I almost bought one myself 3 years ago. Just something is off in the balance? Too much barrel for the bore???
That's just me. Somebody else will snap this up. They look real sweet.
S 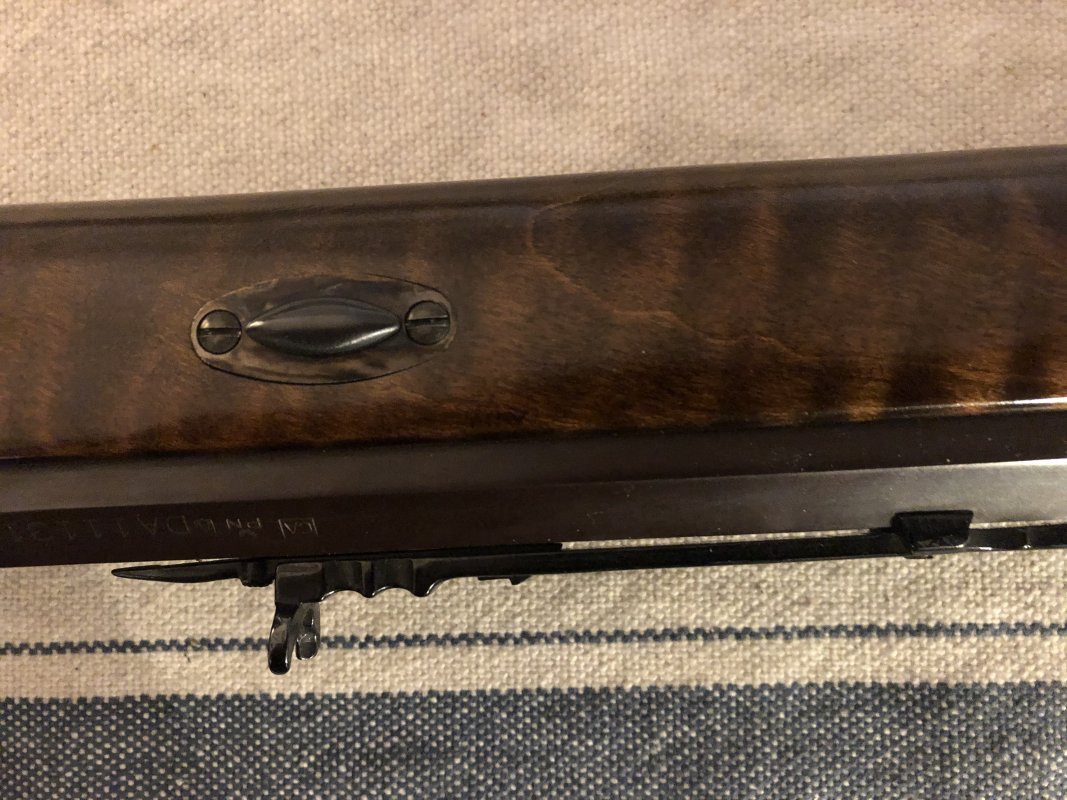 having trouble getting the rest of the pics in my computer.

Ames said:
800 or so. Any pictures?
Funny thing about those guns. When I picked them up off the rack they felt heavy. I know. Hawken style guns ARE heavy. But I ended up building my own from a blank.
Click to expand...

I ended up selling a Pedersoli RMH to a member right here on this forum several years back.

Anyway, I seriously regretted selling it. Turned around and bought another.

Had a hole in my Hawken collection that I wanted filled with the exact same rifle.

You sell that rifle for $800 you’re giving someone a heck of a deal!

Personally wouldn’t sell for under $900 my friend. That’s if it’s in the condition you’re describing?

Lastly, even at $900 is giving a potential buyer a heck of a deal.

stevew said:
Thinking of selling this rifle. It is in like new condition, it has the premium maple stock what do you think it would be worth?
Click to expand...

There is some very nice wood in that rifle! More pictures would be great.

I have a Hawken full stock with a .54 caliber x 1" x 36" barrel. It is heavy. If you want to shoot it offhand, you need to "draw a bead an touch 'er off" pretty quick, because it's too much to hold up for very long. However, twelve pounds was not unusual for original mountain rifles, and some, such as the Hoffman & Campbell rifle carried by Francis Parkman, were fourteen pounds. Most of the period references I have read indicate the marksman would "drop to his knee," or prop the rifle on his wiping stick, or rest it on whatever natural object was available whenever possible for shooting.

Regarding the transfer of photos from your iPhone to your computer, I just email them to myself. Next time I'm on the computer, I save the images from the email to a folder. Sometimes, when I just want to plug a picture into a post on the forum and don't necessarily want to keep it, I save the image to the "desktop," insert it into my post, and then delete it from the desktop.

Now, back to that good-looking rifle...

First...the RMH's are heavy, but what great shooting guns. I've had one for over a decade and have taken a lot of deer with it. Mine is .54 and shoots PRB or hollow based conicals very well. I'm shooting flinters now so it sits in the safe and gets a barrel swab two times per year for good measure. I have no intentions of selling it...too many good memories hunting with that gun.

Another simple way to post pictures here (if you have Windows 10) is to display the picture on your PC, simultaneously click on the Windows symbol key, shift key, and the S letter key. This will let you highlight a box around exactly what you want to paste somewhere else...the whole picture or any part of it. Go to where you want to paste it and right click -> "paste."

Use Snipping Tool to capture screenshots

Use Snipping Tool to capture a screen shot, or snip, of any object on your screen, and then annotate, save, or share the image

That rifle is a beauty. I almost got one but the distributor up here in Canada is out of stock. He has the plain one but I want the maple. Goid luck!

You could always take new pictures with your phone. Log onto the forum on your phone and the following the prompts on from forum choose the photos from your phone to post.
S