Archer 756 said:
question, why are there still showing moulids on their web site ?

Well, that sounds like good news. Hopefully a temporary outage.

I have a couple of Tanner molds. They make good balls but you will need a good pair of nippers as they do not come with a sprue cutter. They will drop from the mold with a Christmas ball looking neck on them.

Just ordered one from Cabelas .454. It has shipped

Have you looked here

Precision CNC lathe bored custom bullet casting molds. Choose a design from our catalog or submit your own custom design.

All sizes here I believe.

bisleyjohn said:
Have you looked here

Precision CNC lathe bored custom bullet casting molds. Choose a design from our catalog or submit your own custom design.

Thank you. I've looked at their website before. Just looked again with your link. They don't seem to list any roundball molds. I might contact them about a custom. They are a bit pricey.

They are, I agree, expensive and if I add UK shipping!!
but you have to pay the skilled bloke who programs the equipment and you want custom made?

bisleyjohn said:
They are, I agree, expensive and if I add UK shipping!!
but you have to pay the skilled bloke who programs the equipment and you want custom made?

For custom made the price is fair, maybe better than fair. I know my luck though, I'll pay for one and the Lee will come off backorder the next day.
B

Accurate molds are very nice. Have some for casting for modern firearms and they are precise and well made.

Some years ago I ordered a Tanner mold and, even without a sprue cutter, it is a fine mold.

I also bought a .595" Lee round ball mould from Track several years ago. I don't know the current status of Lee's mould production, but I've always believed that if you want the truth, you go to the source. A call to Lee Precision may be the way to go.

I cast some balls, but I'm not averse to using precast or commercial swaged balls when convenient. There is no question that casting your own is cheaper, if you do a lot of shooting. For the occasional shootist, precast balls are not a bad deal.

Another manufacturer to consider would be Moose Moulds. I'm unable to post a link, but if you Google "moose moulds" (with the "u" in "mould"), a link to their website will pop right up. Look in their menu for "Moose Balls." They have a wide selection of sizes, including .595", but they also have a few that nobody else makes. I bought a .550" round ball mould from them and I'm pretty happy with it. I believe they make their moulds to order, and they gave me a choice of a tangential cut-off (like Lee) or with a sprue (like Lyman). It does not take them long to fill an order. They are good folks, with a family-run operation, and the proprietor is a competition black powder shooter. The one thing that may put people off is the price... $100 for a single cavity mould or $125 for a double cavity. You have to decide for yourself if that price is acceptable. It won't cost you anything to look at what they offer. I have no regrets with regard to the one I bought from them.

Good luck, brother! I hope you find your mould.

Older lee molds were problematical at time on aligning up, the newer one must be CNC shaped because they are close to perfect.

New style alinement pins. Don't know why but most the Lees worked fine and all of a sudden you would get one that was problematic. A couple ways to cure the problem was to set the mould on something flat before you closed it, and then close it. That more or less would force it to line up. The method I like is I tap the center of the mould handles where they hinge together with a small plastic mallet. That kind of jars the mould enough to line up and close all the way. I also use the mallet to hit the sprue cutter so the mallet is already in hand anyway.

I do it whether it closes all the way or not. That way I know it closes. It's not good when you are casting along, and everything is going great(so you think) and then you realize the mould isn't quite closing al the way by just a few thousands, so now you have to go back and cull allot of what you already have done.

I have a number of LEE molds for both round ball and modern firearms. I bought one after they changed the configuration of the mold blocks/alignment pins. Wouldn't you know it?! The screw that holds the right hand mold block simply fell out! It was cheaper for me to fix the problem than send it back. I wasn't happy with that. JB Weld to the rescue! Other than that one time I haven't had any issues. Accurate Molds are a fine mold. Tom@Accurate does an absolutely stellar job! I have four molds made by him. I think I'll contact him and ask if he makes round ball molds. Expensive? Yes! Top shelf quality? You betcha!!

www.mp-molds.com
I have several of his molds for casting complex conical bullets (hollow base and hollow point) and they are excellent molds.
This one is a 4 cavity 36 cal hollow point. I shoot these in my pepperbox that I got from a member here (and one of those "otherguns").
The pins are reversible for casting a flat point. 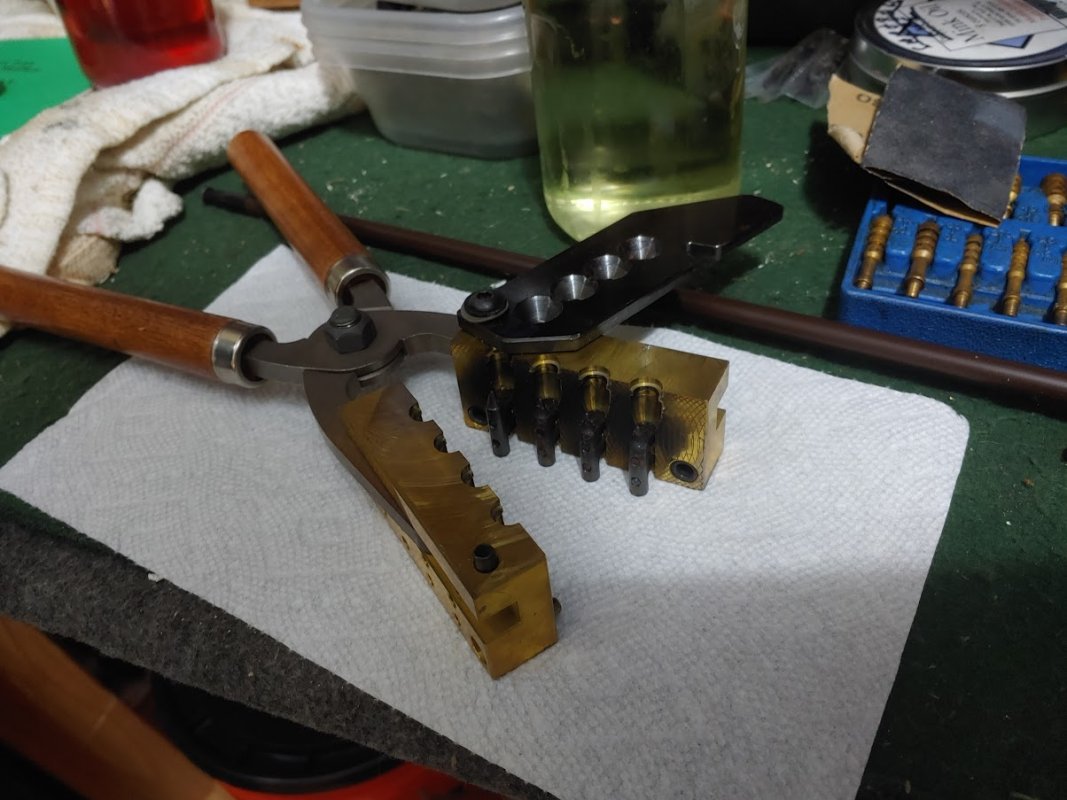