There for a while it seemed like every third, or forth rifle that Doc White built for the GRRW Collector's Association was some form of Hawken with the narrow, curved buttplate, and a Kelly barrel in .58 caliber with a 1:90" rate of twist. Doc never really came out and stated clearly just what the depth of the grooves was in those Kelly barrels. He just said that it was suitable for patched balls at high velocity with big powder charges.

I always wondered how much powder it would take to start getting good accuracy, and at what point the accuracy would either start to suffer, or the law of diminishing returns would kick in.?

If it hasn't sold, there's one right now on our FOR SALE section of the forum.

Any thoughts, anyone?
R

BS said:
View attachment 86746
This is from my Carleton Rifle, it is a 58 with Alexander Henry rifling. Slow twist 1-90.

It is an odd creation with a sliding under hammer.

BS, how deep is the Alexander Henry rifling in your barrel?
B 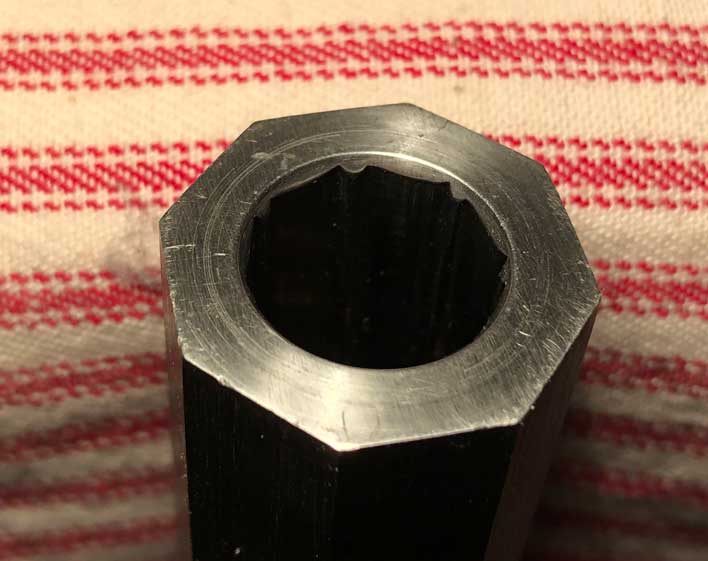 Traditional, maybe not , but I would be willing to shoot a rifle with scope and muzzle break. At least look at one. Neither my .375 HH nor 300 WM have a muzzle break but the .38 super pistol does.
B

This information comes to us from our friend, Bruce Strickling, to whom we are most grateful for sharing this valuable and thought prov...

rjrenner.blogspot.com
Today with a 2 shot trial in my .62 Rice Forsyth barrel. 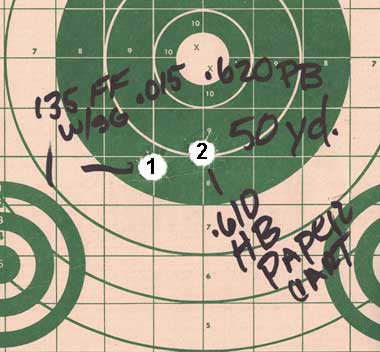 I need to reduce the taper of the mandrel, so that I can get more powder in the tapered tube.
L

R.J.Bruce said:
The last thing I'll mention is that I have had lousy, stinking, rotten eyesight since I was 7 years old. It would be nice just once to shoot a flintlock rifle and be able TO ACTUALLY SEE MY TARGET FOR A CHANGE. Not have that 18th Century front sight completely cover what I was trying to shoot at. The ONLY WAY that's ever going to happen is when I look through a modern telescopic scope that magnifies the object that I'm trying to shoot at. I have tried everything else. Peep sights work out to about 25 yards for me. How many people here are WILLING TO LIMIT THEMSELVES to never shoot past 25 yards, when there is an alternative?

That's where all the traditional muzzleloading shooters get on my last nerve. They might pay lip service to the ageing shooter that NEEDS a scope, a seat, or standing cross sticks because of infirmities. But, let someone actually scope a flintlock, and the howls of dismay can be heard on the moon. These people want the ageing shooter to jump through hoops trying all kinds of optical gimmicks to trick their eye into believing that it can actually see better than it can. And, that's OK, up to a point. Because, all those tricks are just short term fixes for what happens to everyone as their eyes age.

Why doesn't our community start facing reality? Our mean average age is over 70 years old. The elders with the most accumulated knowledge are dying off week-by-week, month-by-month, year-by-year. Not only do we need to encourage anyone who shows the least amount of interest as much as possible, young & old alike; but we need to start treating anyone with an infirmity with respect.

ALL clubs, shoots, & matches need to start taking age & it's corresponding infirmities into account by having separate categories for those that need to sit to shoot, are wheelchair/scooter bound, need cross sticks when sitting or standing, that need aperture rear sights in order for their shooting eye to focus, or simply require a scope in order to see to shoot.

While I am the last person to disagree that offhand shooting can make for a better shooter, I will be the first person to step up and say that going to a club to shoot, and have every shot be taken from the offhand position is just plain wrong. And, in my opinion, does a great disservice to club members, & visitors alike.

I think that it's time to come to grips with the fact that our ancestors ONLY shot from the offhand position if necessary. Like at turkey & ham shoots. In everyday hunting I am sure all but the most extraordinary shots used a rest whenever possible.

Why not just stop howling at the moon, and let modern, and I don't mean inlines, muzzleloading shooters scope their sidelocks, flint or percussion, without all the criticism? Especially, if it's a Thompson/Center, or an import. Even if it's a custom longrifle?
Click to expand...

An interesting rant, to be sure...,

While I'm sure you are tired of encountering "traditional shooters" who don't use optics and poo poo them....,
I've noticed that optics are not prohibited for discussion according to the forum rules. Unless I'm wrong and I missed something... although I read them twice today before replying. So apparently our community here does not hold, or at least did not think to hold, modern optics out of the traditional ML use....

I've always been of the opinion that "shooting unsupported" was a military thing, not a hunting thing, and I've only done it once for deer. I always move from a location where I can use something as a rest, to the next location where something may be used as a rest.

As for club matches and categories, well perhaps it's a matter of simply starting an event that permits such things as improvised rests, and dedicated portable rests?

Since "traditional" right now when defined limits the technology used, then perhaps we need an "Traditional Muzzle Loading Unlimited Match" and this would mean "unlimited in the position used and optics and rest chosen". Granted..., the folks with the wheel chair and built-in supporting/aiming brace will be pretty stable, so then maybe really shrink the targets?

I will caution the participants in the discussion, to beware delving too much into mentions of modern firearms.
I have a bunch myself, some of them are very recent purchases, so I'm no purist by any means ...,

Tear the end off and pour, then stuff it down
R

The point I was trying to make in my rant post was that most traditional muzzleloading clubs that I have visited insist on all shots being taken from the offhand position. Which, in my opinion, is completely unrealistic. It's making huge assumptions about 18th, 19th, & early 20th Century hunters/shooters always shooting from a offhand position that can't possibly be true.

So, I have asked myself, if modern hunters, and I include myself here, always look for some kind of a rest to steady their rifle when hunting, why do virtually all clubs stage their shoots for offhand shooting? It's a conundrum to me.

Stages with more realistic conditions compatible to actual hunting situations would seem to make more sense, and ultimately be both more challenging, and more fun.

Just my take on things.

BS, I like that last target with the Rice Forsyth barrel, and the 135 grain ffg charges.

This information comes to us from our friend, Bruce Strickling, to whom we are most grateful for sharing this valuable and thought prov...

rjrenner.blogspot.com
Today with a 2 shot trial in my .62 Rice Forsyth barrel.
View attachment 87423
I need to reduce the taper of the mandrel, so that I can get more powder in the tapered tube.
Click to expand...

If you can repeat that on demand, you'll have a formidable hunting load.
B

If you have a leather flat pouch and the primer or capper hanging ready on a slow day 10 seconds.

At the bench moving at a slow pace 8 seconds is easy.

In a hunting situation needing a reload, I would never use a patched ball again.

In the tapered paper cartridges you don't have to use hard lead, soft lead also works.

And do what ever works for you!

BS said:
If you have a leather flat pouch and the primer or capper hanging ready on a slow day 10 seconds.

At the bench moving at a slow pace 8 seconds is easy.

In a hunting situation needing a reload, I would never use a patched ball again.

In the tapered paper cartridges you don't have to use hard lead, soft lead also works.

And do what ever works for you!
Click to expand...

Gratuitously obvious question: what about water, dampness in that paper? The idea is appealing. Our ancestors used paper patched round balls. But they were at the mercy of the weather.

On the subject of big bore hunting rifles:
Top is .62 caliber round ball. Bottom is .54 caliber round ball. Both moving at a close to maximum 1,550 fps. It’s true that energy is not the sole determinant or measure of power or force, but it’s a good place to start. Most of us think of the .54 as a real thumper. 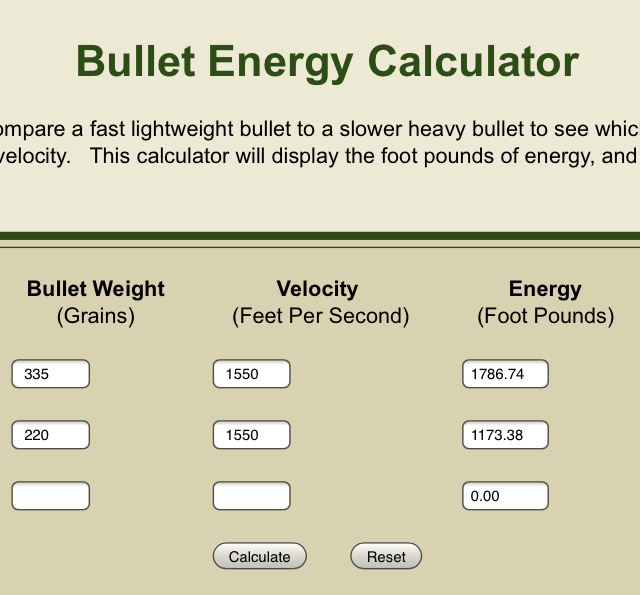 pamtnman said:
Gratuitously obvious question: what about water, dampness in that paper? The idea is appealing. Our ancestors used paper patched round balls. But they were at the mercy of the weather.
Click to expand...

This is your second shot, not your primary.

Remember the saying "keep your powder dry", well do the same with your paper cartridges.

BS said:
This is your second shot, not your primary.

Remember the saying "keep your powder dry", well do the same with your paper cartridges.
Click to expand...

you greatly exaggerate the assumed accuracy of my first shot. Some guys enjoy a whole sixpack of beer. I’m the guy enveloped in a haze of blue smoke pawing in the possibles bag for a third and fourth shot.
“I’ll get ‘em this time.”
For the record, I have brought two deer to hand with a flintlock. Out of a thousand I’m sure I hit.
B

I will have to see if I have any old info saved on how many can be loaded before the get to hard to load.

But my best guess is three reloads, the 4th was hard.

Depends on brand and amount of powder.

I have needed a bayonet before.
M

Thank you for posting this link! Beautiful!

PM Osprey over at ALR forums. He purchased a .66 caliber, Rice, Early Dutch Lancaster, 41" long barrel, with the 1.312" diameter breech from a fellow forum member. Last I recall, he was working on a rifle with the barrel inletted into the blank. That was several months ago.