Flintlock doe down in PA

Killed this morning with my 54. 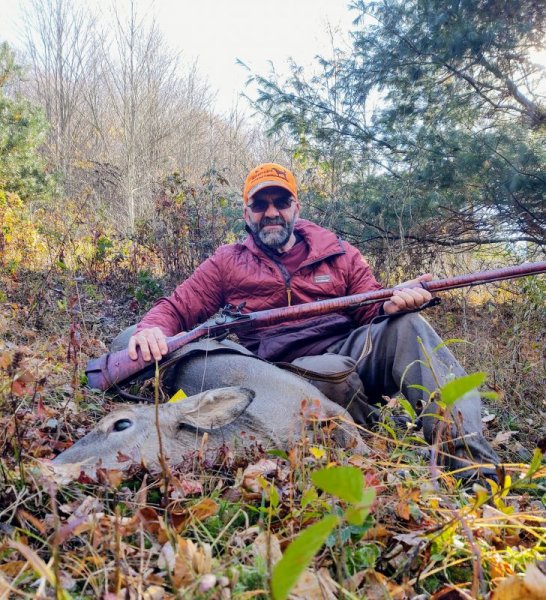 Congrats on your successful hunt. I miss hunting.

GANGGREEN said:
Killed this morning with my 54.
Click to expand...

Meat for the freezer, way to go! Nice looking flinter too!
Flintlocklar

Ahhhhhh. Hunting season. I'm still 2 weeks off but you did fine with that one. Congats!

Congrats to you! That is a nice looking deer. Well done.

Congratulations. I didn't see any deer. But, I think I could've had my limit of squirrels.

I've gotten to the point where I simply don't hunt as much as I used to. I used to be an avid archer and felt like I needed to tag my buck each fall with a bow, but I haven't even been out with the bow yet this year. Wasn't too concerned about filling the doe tag either other than the fact that my oldest brother was down to hunt yesterday with me and my youngest brother (he's still older than me) will be here to hunt Tuesday and Wednesday.

I saw no fewer than 10 deer by the time I dropped this one at 8:30 or so and two of those were buck. My brother only saw 2 deer all morning, but they were both buck. We heard turkeys, in fact, we even heard a few gobbles. I saw a squirrel or two and heard a dozen of them. The weather was nearly perfect (below freezing to start, but clear with little to no wind) and it was just a beautiful day. As I sat in my treestand watching the world wake up I told myself that I have to start doing this more.

By the way, regarding the photo.....I've taken deer and turkeys in the past, brought them home, butchered and ate them and realized that I didn't even get a photo. As I've gotten older and realized that my hunting seasons going forward are limited, I've tried to get photos of the harvest, even when it's just a grouse over my setters or something like that. When my brother and I found the deer down (we actually had a decent tracking job even though she was hit hard) I asked if he had his cell phone or a camera. He did not, nor did I, so I tagged, gutted and dragged the deer to where I could pick it up with my tractor, went home, changed my jacket (blood on it and it had warmed up anyway. For you PA guys that know the regs, I WAS wearing an orange vest and the orange hat while hunting) and came back with just my cell phone (I have tripods and reasonably expensive digital cameras and lenses, but didn't want to be bothered). Because I was alone, I had to find a method to get a photo or two with the phone and it wasn't easy. I ended up wedging it between 3 flat rocks and setting the auto timer and I'm glad that I did. Other than posting the photo here and sending to a few friends, I may not look at it again, but my sons may one day be glad to have it. I wish I had more photos of my dad before he passed away.
Last edited: Sunday at 6:47 AM 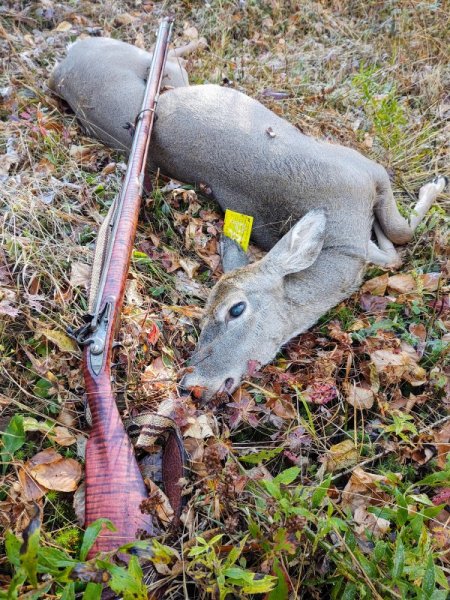 I see that you put it right in the ENJINE ROOM? a prefect text book shot! no tongue hanging out , good. well maybe just a little?

I tried to tuck the tongue back in as I try to take tasteful "kill photos". Believe it or not, it was a good shot, but not perfect. It felt good and I was surprised that she had taken off in a straight line, albeit bleeding fairly well for a roundball shot. She probably went a full 250 yards (leaving an acceptable blood trail the whole way), before I caught up to her in her bed, too sick to get up or go on. You can't tell in these photos, but believe it or not, I put a coup de grace in her head, knocked her other eye out and left a pretty big hole.

I see guys on here mentioning all of the time how they've never had one run, have never wounded one, etc. etc. and while I'm not calling anyone a liar, that's not been my experience at all. I don't know exactly how many deer I've killed with a flintlock, but I'm guessing that I'm at 20 or more now and at least half of them have run off after the shot and probably closer to 75%. Of those, most were "hit hard" and some were hit perfectly, yet they still ran, sometimes as far as 100, 150, 200 yards or more (like this one). When I saw her in her bed, I could see that my shot had been slightly back and I wasn't sure if I would have hit a lung or two or not, but one of the lungs was collapsed and partly sticking out of the entrance hole, so clearly she was mortally wounded and hit reasonably well. Sometimes they still run and they don't always leave a great blood trail.

For what it's worth, the shot was with a .530 roundball, .020 linen patch and 85 grains of FFFg. Sometimes they have an amazing will to live.

Congrats on the nice doe. That's a nice flintlock rifle.

I like your rifle. That's a nice doe you dropped.

I went out Saturday in PA too on state game lands, had some jerk drive by around 7:30 am on the walk in trail on a MOTORCYCLE! Walked around a little later, bumped a deer, but didn't have a shot. Only thing that came home with me was the tick latched onto my eyelid.
You must log in or register to reply here.
Share:
Facebook Twitter Reddit Pinterest Tumblr WhatsApp Email Link