can anybody help me with information about this pistol, it is part of a collection of my father. The only inscription says: “manuf re a versail(les)”.

Thank you in advance! 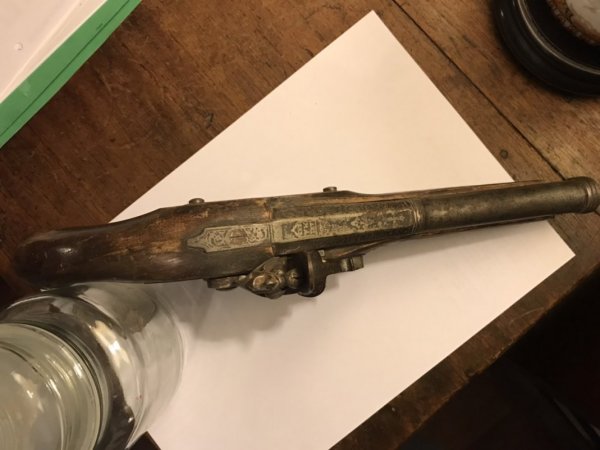 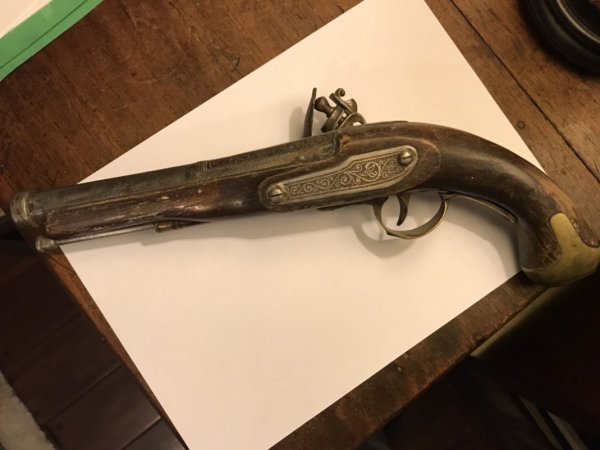 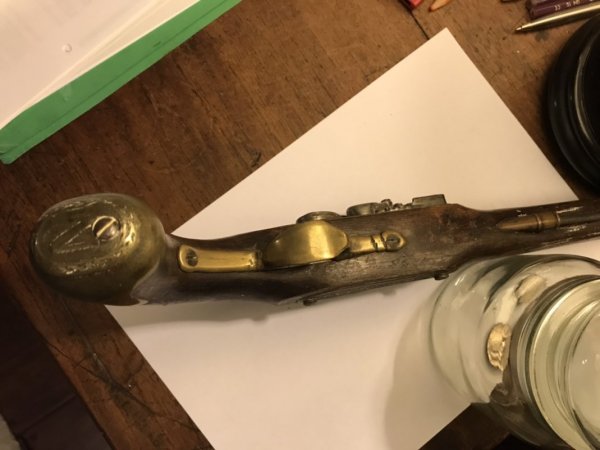 Looks like a decorative pistol made from odd parts.
T

It has the appearance of a cast barrel and metal parts and is very crudely done. As Mr Squanch note, a decorative piece sold in many stores that specialise in such things.
Last edited: Nov 26, 2020
T 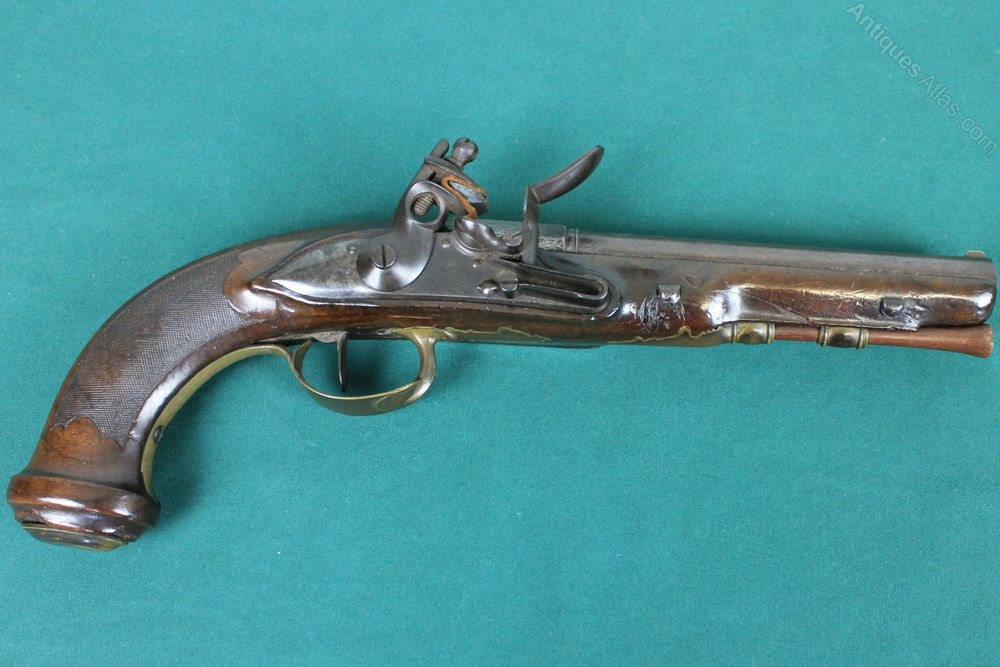 As mentioned above, it is a Tourist item made for decoration only. Do not attempt to shoot it. The barrel itself, as well as the engraving, is likely a one piece casting. In fact, the bore may not travel the entire length of the barrel. These pistols were popular tourist items during the 1950/60's in some European countries (especially Spain). Actually, they are better than the later copies from the 1970's and later. But still made for decorative purposes only.
Here is a Spanish styled piece likely made during the same period. To the untrained eye, from a distance, it looks to be a genuine pistol. But an immediate, closer look reveals it to be one of the tourist pistols. These often show up at auctions from everywhere. Wish I had better news for you. But at least you know. 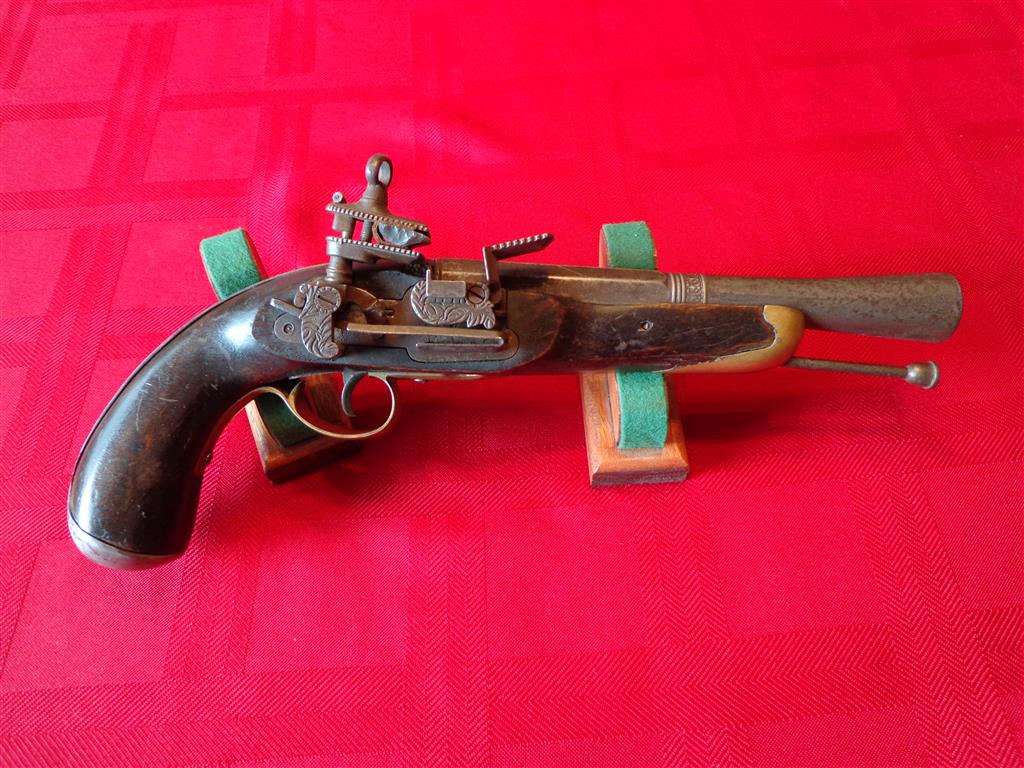 Thank you all for your comments and expertise!

Did the trigger mechanism work on such decorative pieces?

The barrel seems to be one single casting and the lock plate with the engravings another. The lenght of the bore goes up to spot behind the little hole.

Don´t get me wrong, i´m not questioning your assesment, just trying to learn something since i´m new to this kind of firearms. 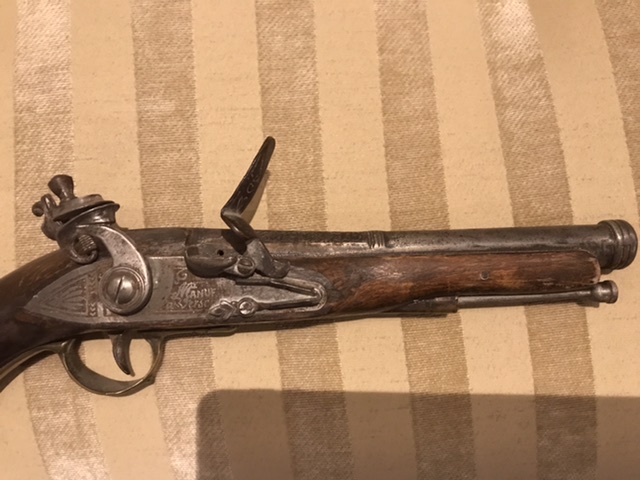 What also makes me wonder a bit is that other pieces in his collection should definitely not be replicas. For example: 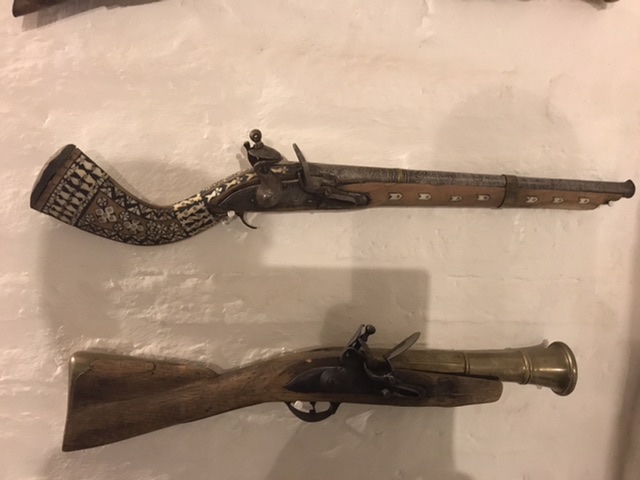 The last 3 look like replicas, even more so than the first one.
S

I wouldn’t fret... they are worth something to someone. They make nice decoration for the den!

I would trust @rickystl's opinion with respect to these eastern European firearms ahead of my opinion.
R

Thanks for the additional photos. My pistol's bore is also drilled through back to just behind the vent hole. Most are. But it's still a decorator only. Most of the locks on these guns will function. But the mainsprings are usually too weak and the frizzen too soft to produce much of a spark. For decoration purposes it was not necessary to go to the additional expense.
Your guns:

1 A European tourist item, as discussed above.

2 Looks like an attempt to copy an original French ANXIII pistol from the early 19th Century (?) Could be an original Belgium made copy from the period (?)
But difficult to tell from the one photo. Would need closer pics. Especially of the lock with the frizzen in the open position showing the pan and vent hole. How many lock bolts are on the left side of the stock ? One or Two ? In any case, the ramrod is wrong. Too thin, and incorrect style decorative tip. But could be just a later replacement.

3 This Afghan styled/decorated gun is likely also a decorator piece. These have been, and still are today being sold in various bazaars in Afghanistan. See photo below. While the locks will somewhat crudely function, the barrels are usually just a piece of decorated pipe. It seems that many were brought back to the U.S. by returning Troops from the Afghan campaign. And eventually resold. The short barrels made it easier to transport back home. Virtually every 19th Century original shooting guns had much longer barrels, unless damaged and shortened during the period. Many of the tourist items made during the earlier part of the 20th Century actually were made with a combination of original surplus and new (for then) parts. Until sometime in the 1970's when the surplus started to dry up. It often takes experience and knowledge to detect the originals form the tourist copies. Especially with these Eastern guns.

4 Hmmmm. Not sure on this one either without more detailed photos. From the one photo, it looks like it was assemble maybe sometime during the 20th Century using surplus parts. Looks like a musket stock and lock that had a broken fore stock and missing it's barrel. With the brass blunderbuss barrel added at some point. Notice the barrel sits too high in the stock. And appears to lack a hole for a ramrod (?) In any case, it looks to have been assembled by an amateur gunsmit for decoration purposes.

Hope some of this helps. 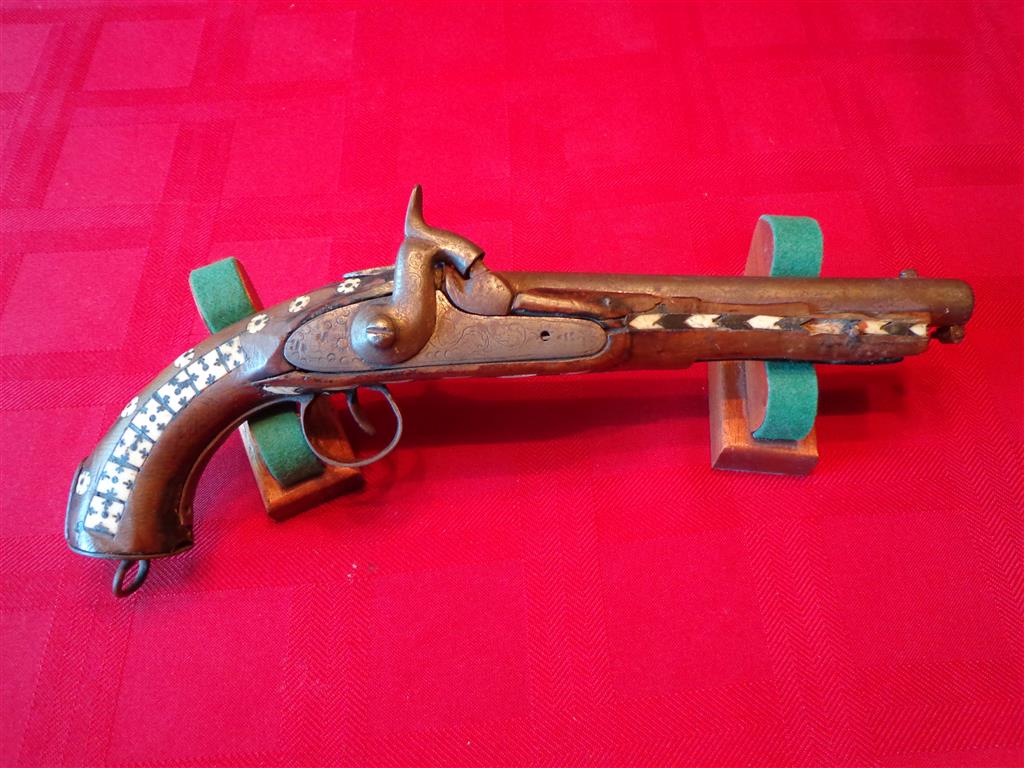 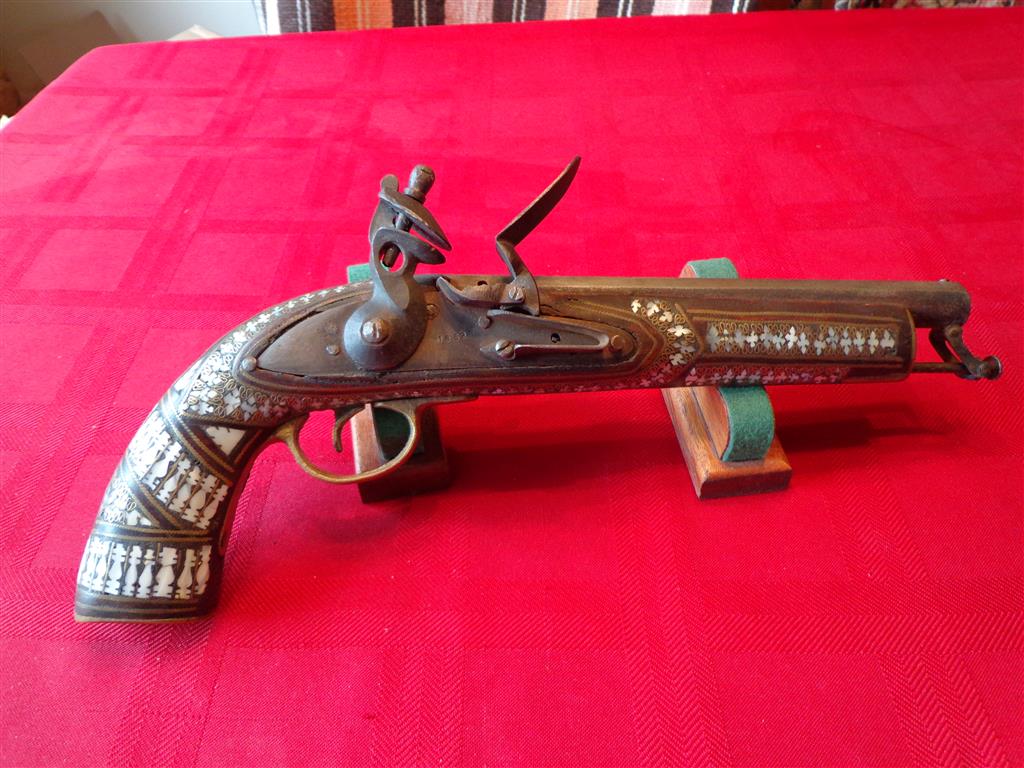 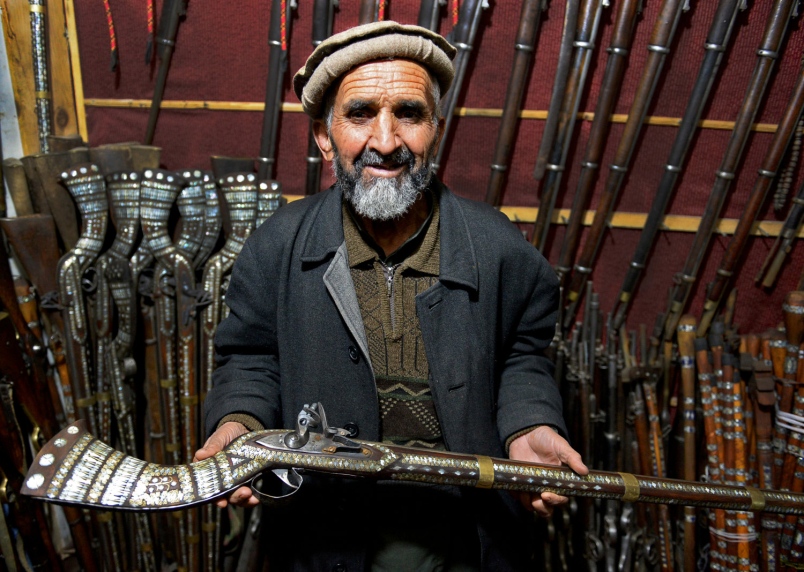 Rickystl - is that a self portrait? 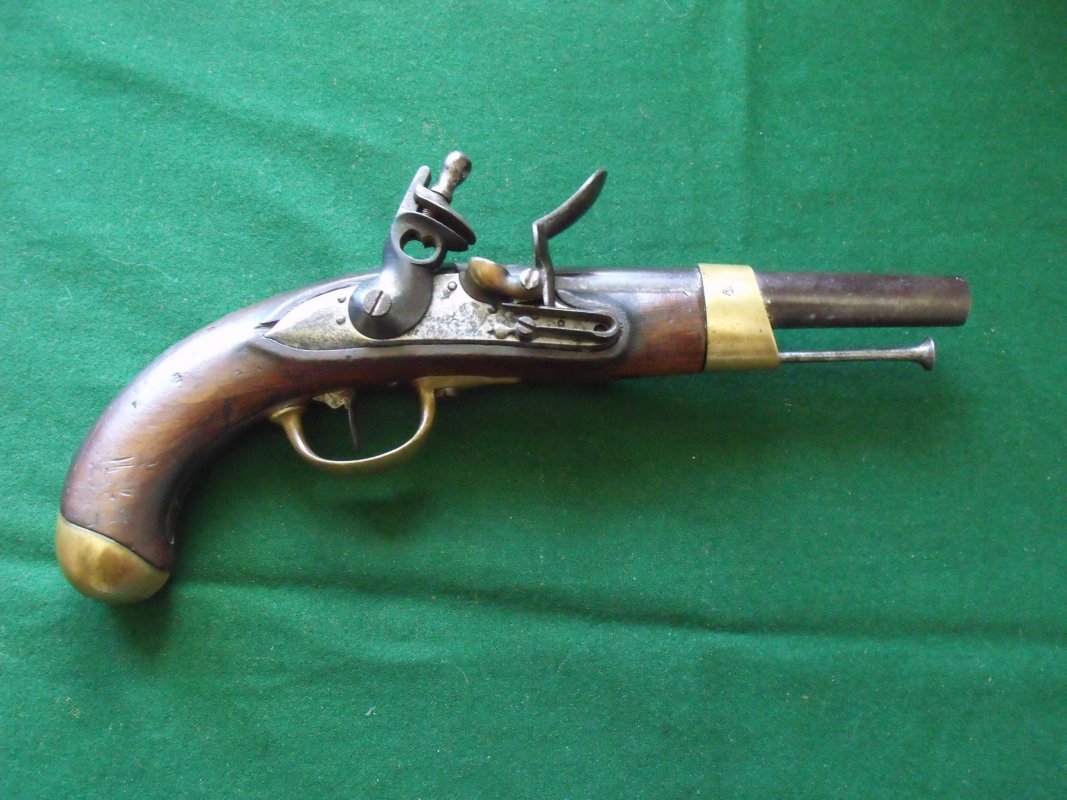 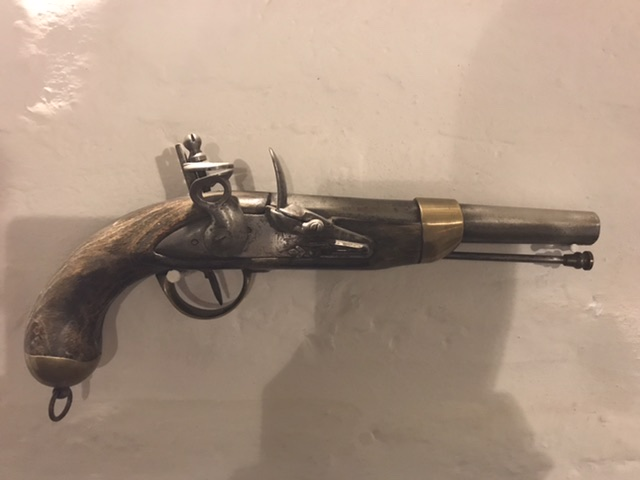 Yes, good comparison. If Naun's pistol is authentic, it could be one of those pistols that was assembled a bit later from various surplus parts by one of the many Belgium gun shops (?) These turn up fairly often and turn into head scratchers. LOL Belgium would purchase government surplus parts from everywhere and assemble guns promoted to the civilian markets, and exported accordingly.
I keep looking at the wood and stain on Naun's pistol. Just has me suspicious. But need more close up photos.

Speaking of your French pistol, here is a period Belgium copy of a French ANXIII pistol. It's built virtually identical to the French pistol, but with iron mounts versus brass. Only one I have personally seen. 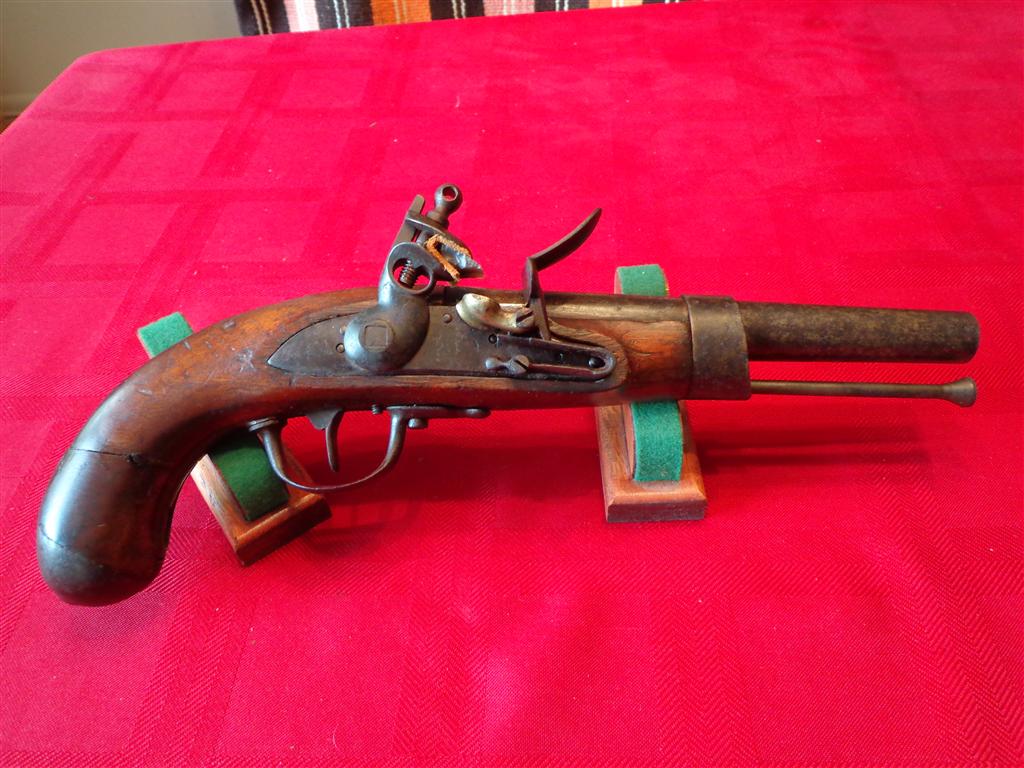