I love mine. Here's my .50 caplock made by the original Hatfield company. 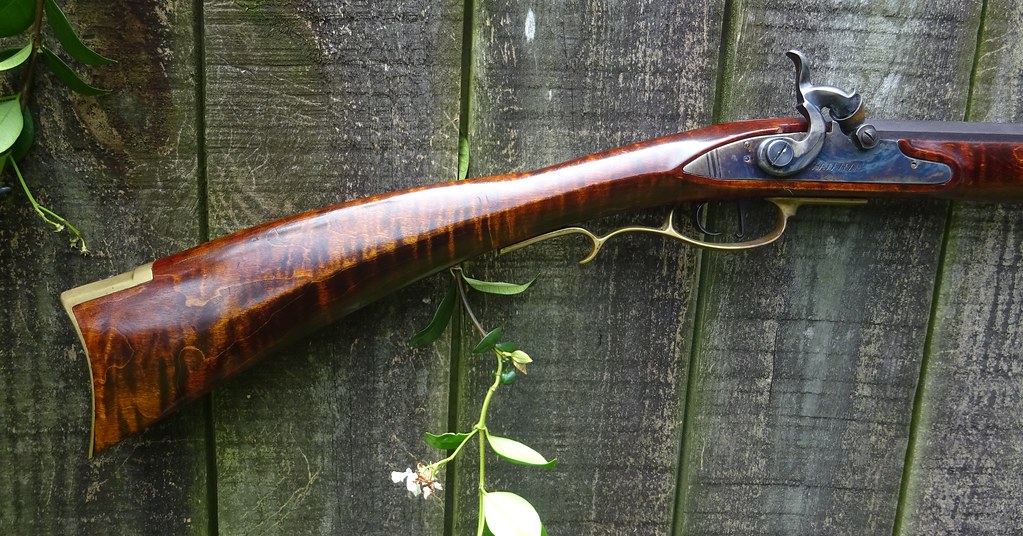 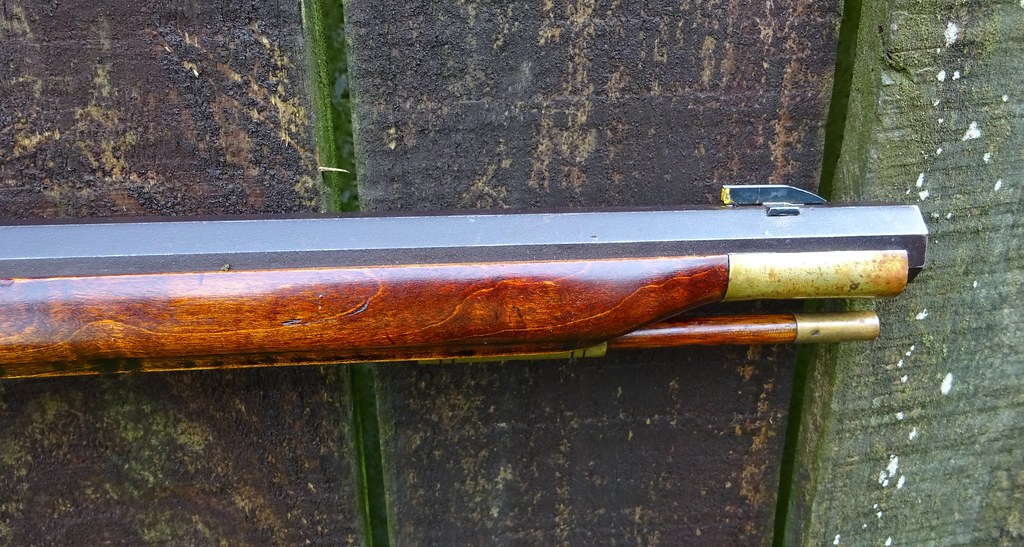 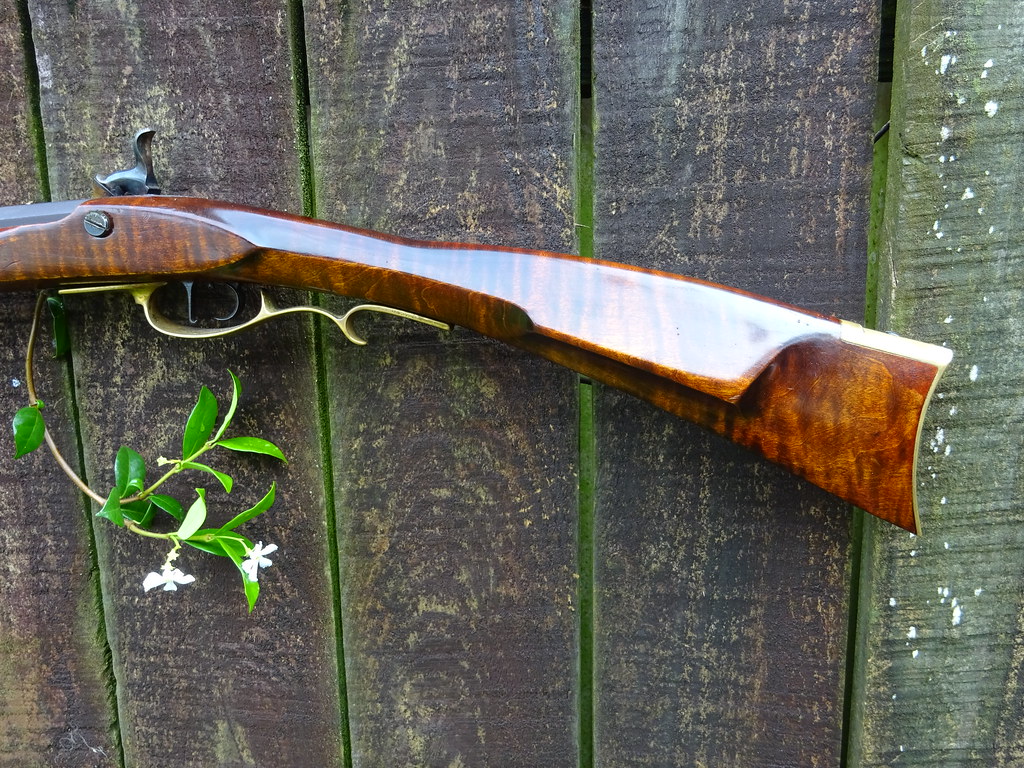 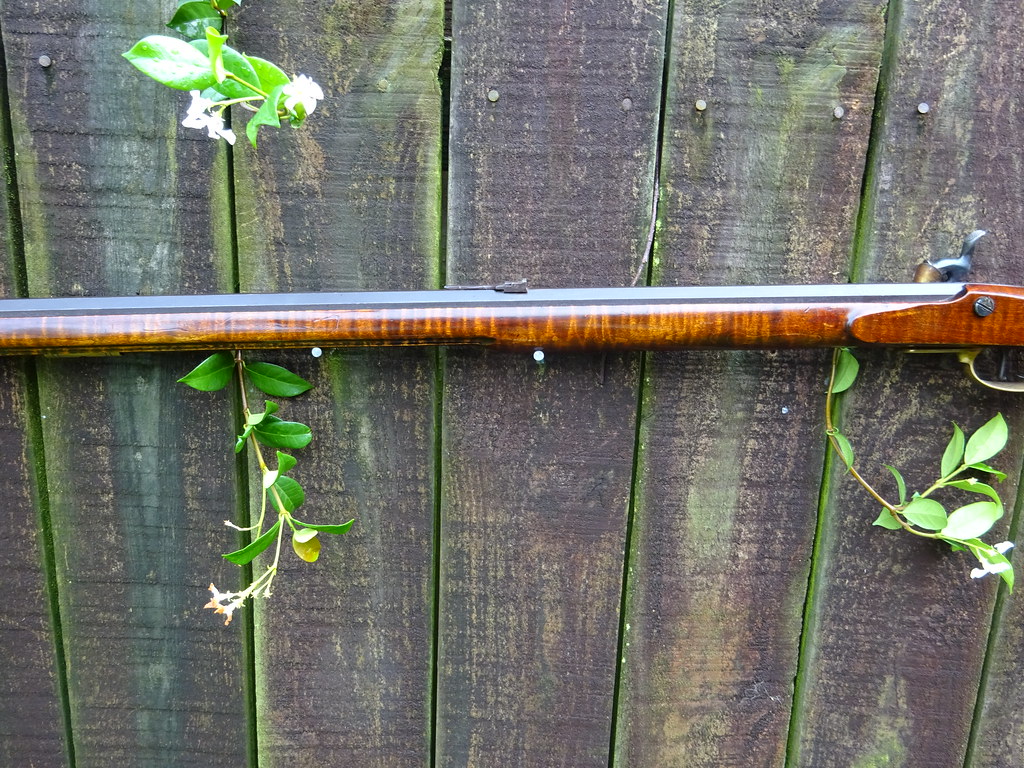 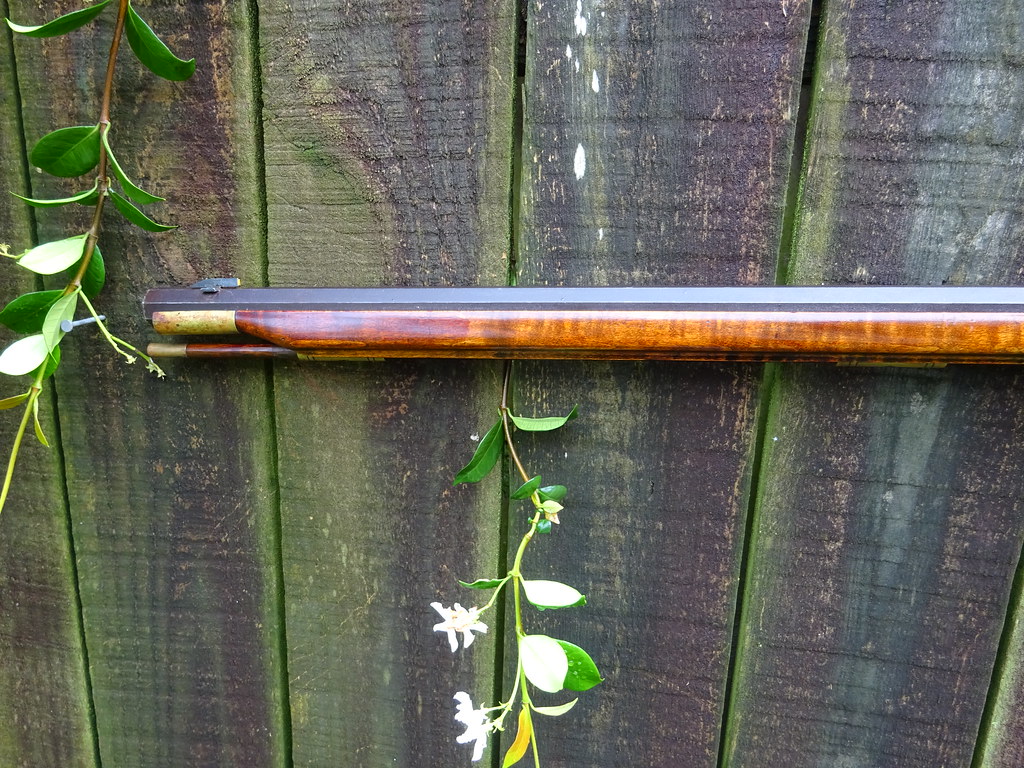 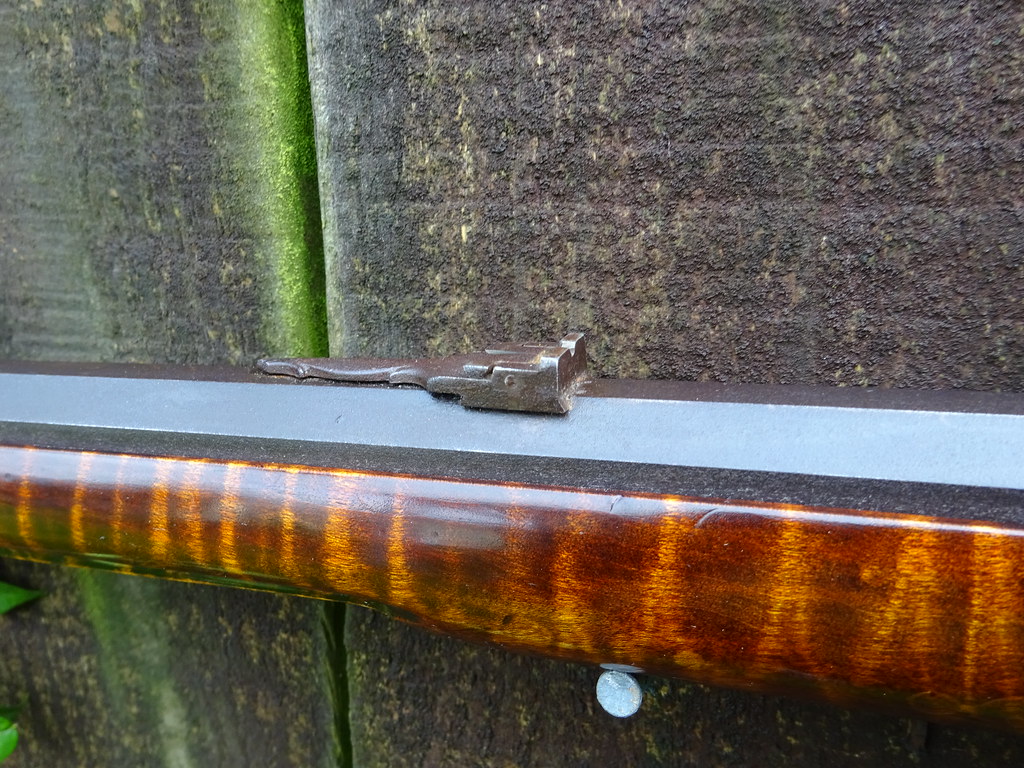 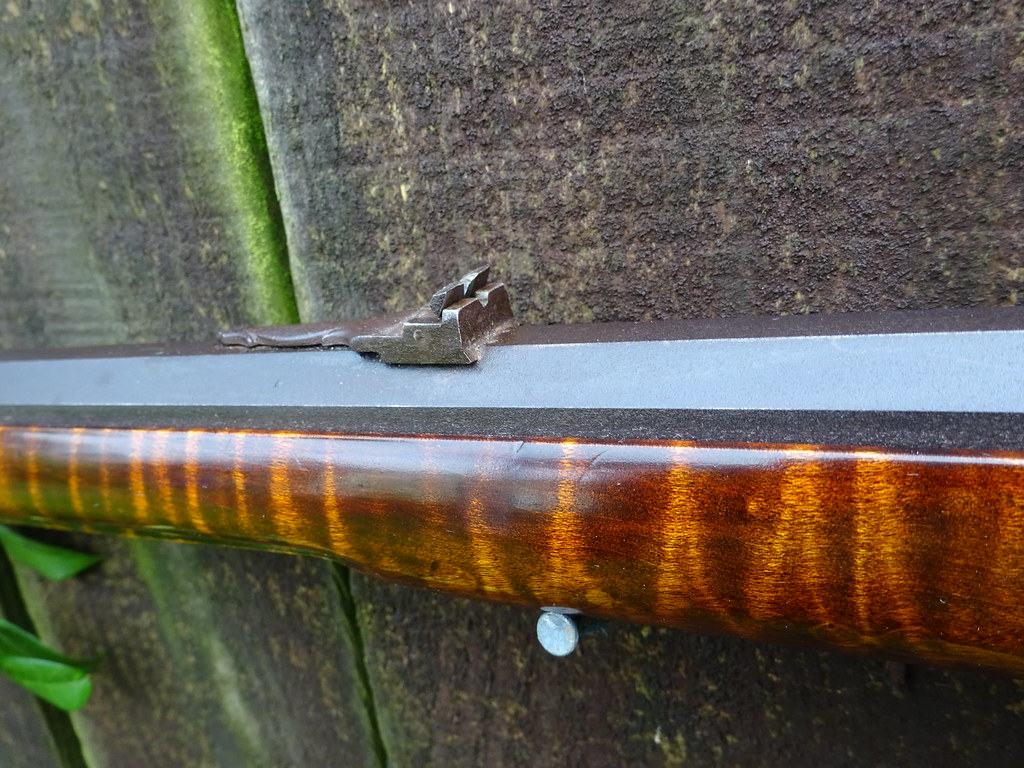 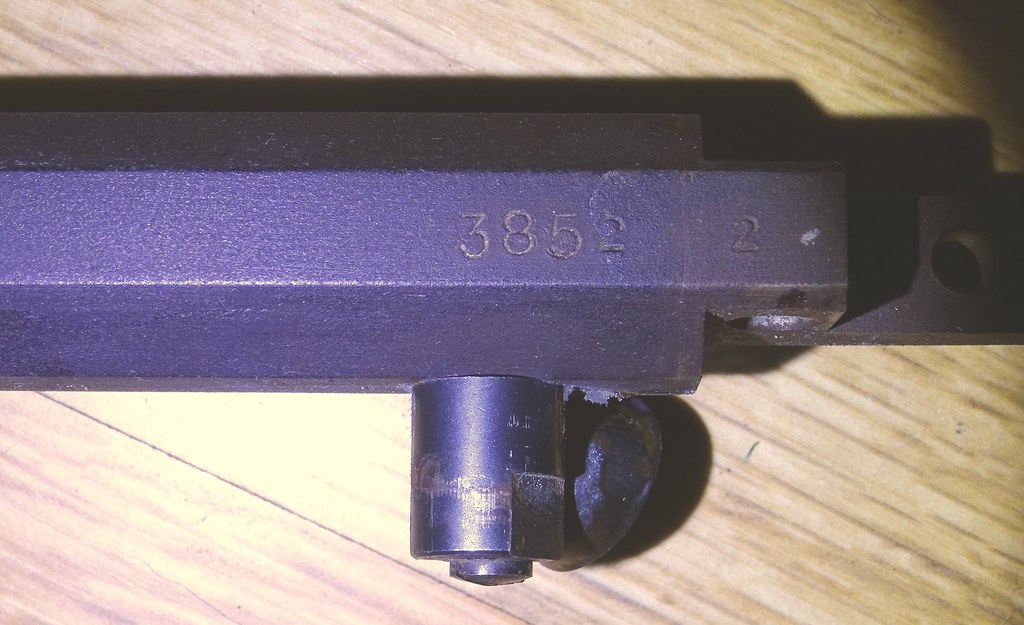 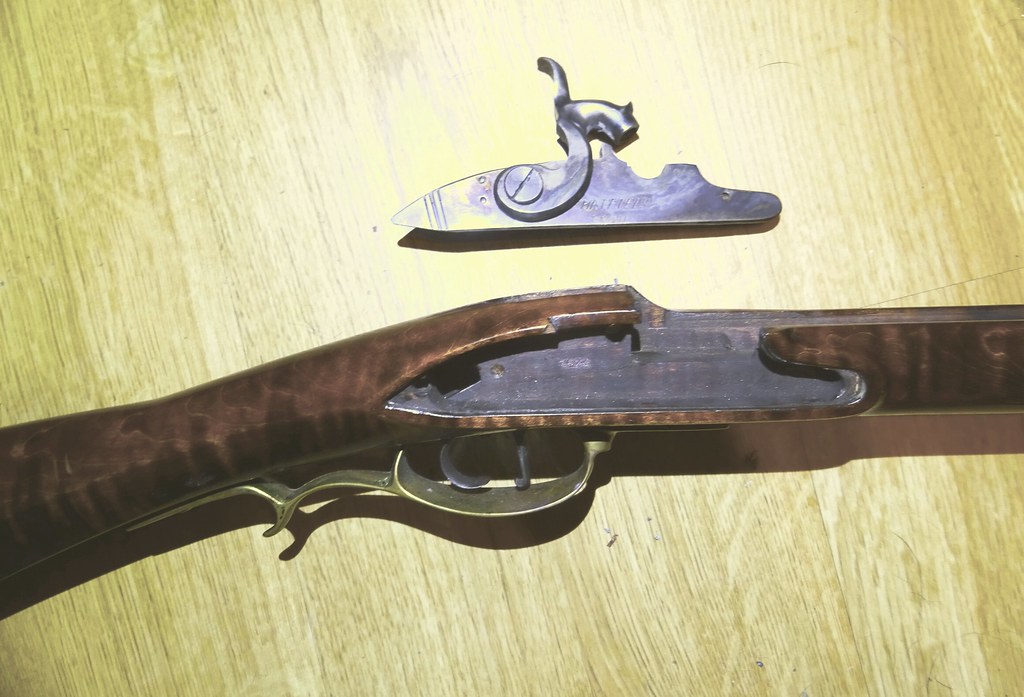 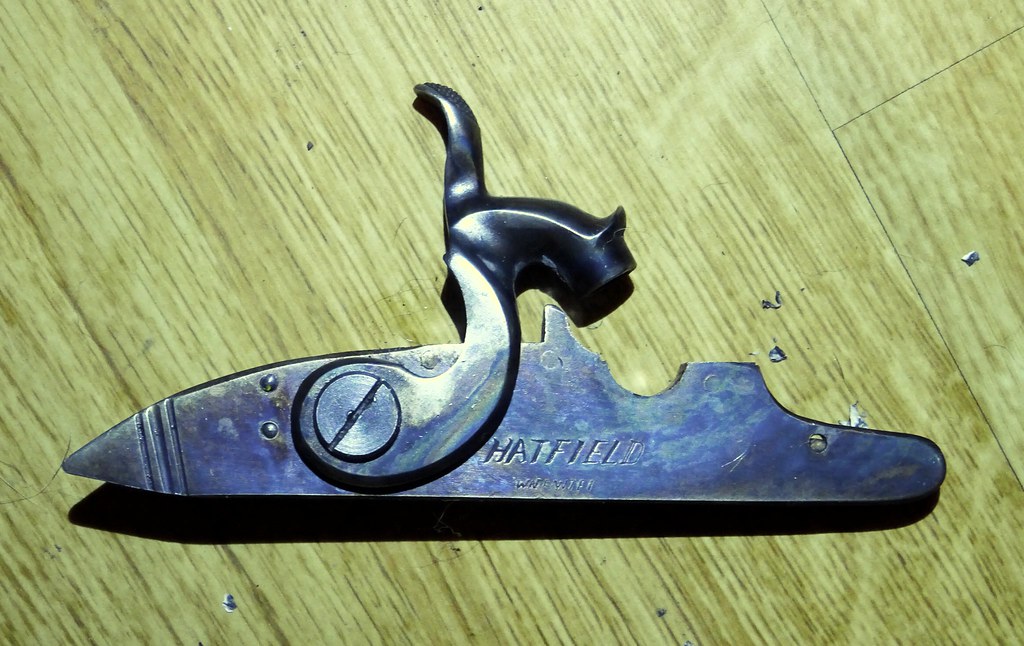 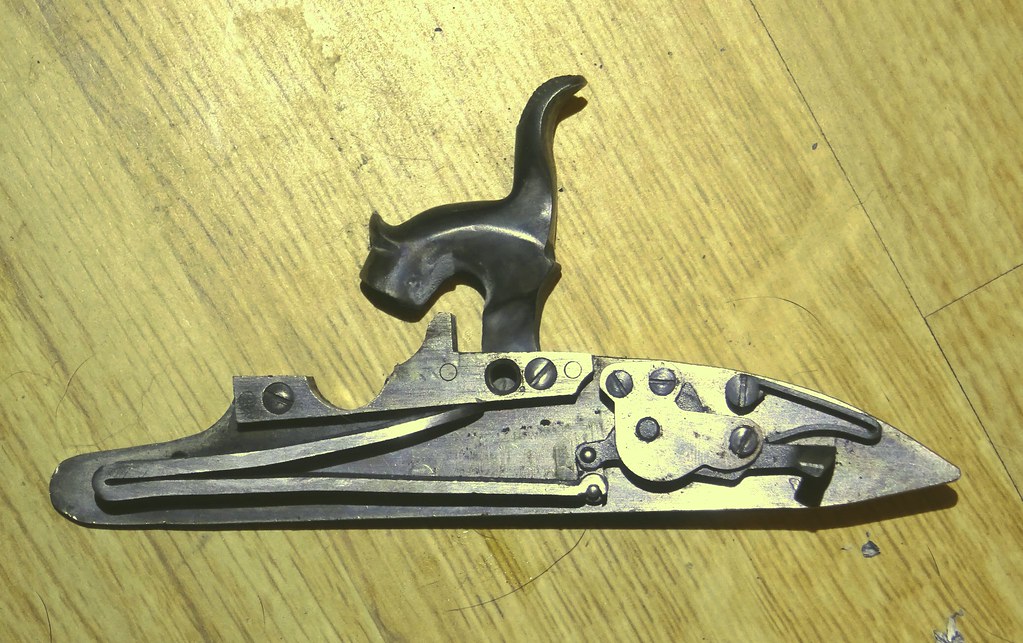 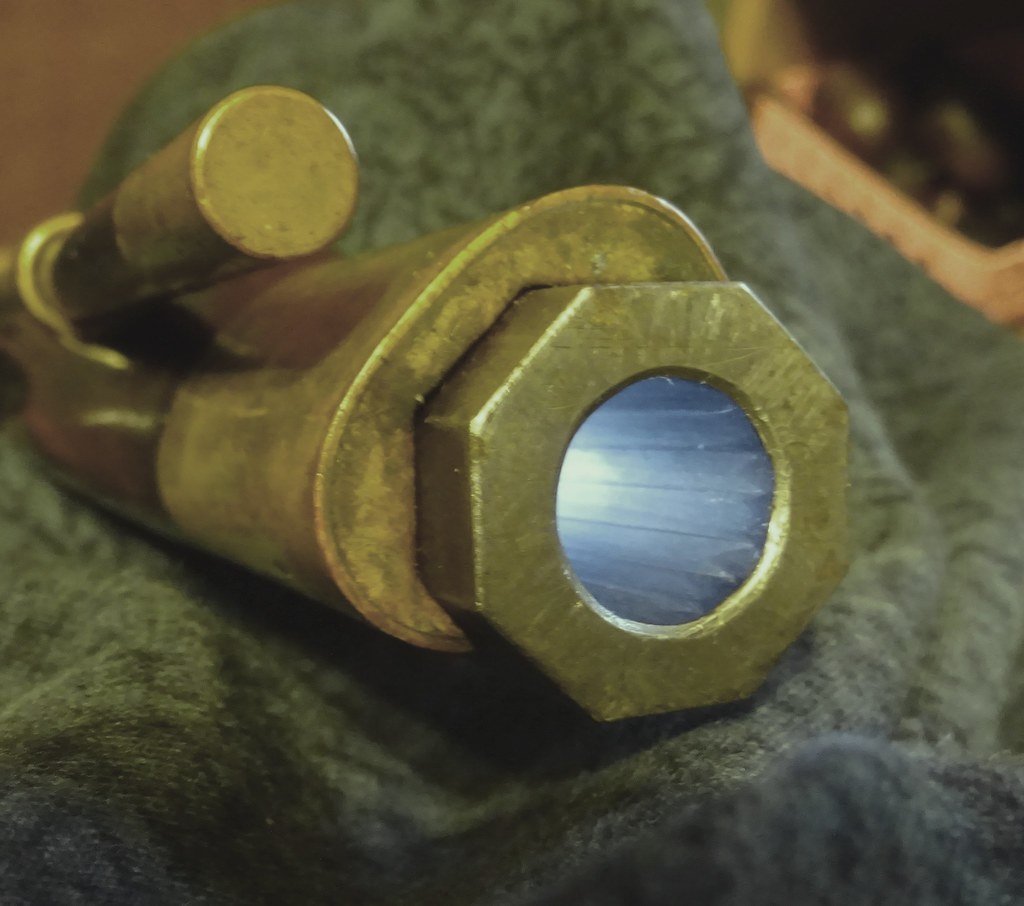 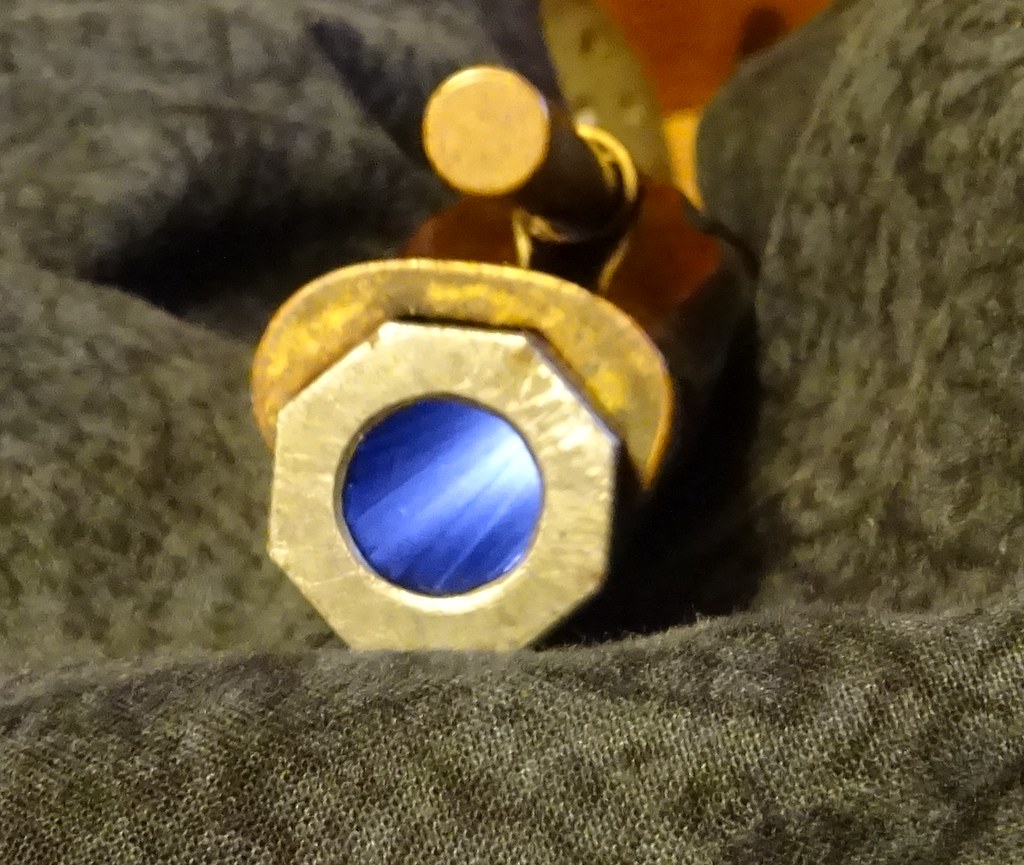 And here's my .45 flintlock made by Pedersoli for the later Hatfield company. 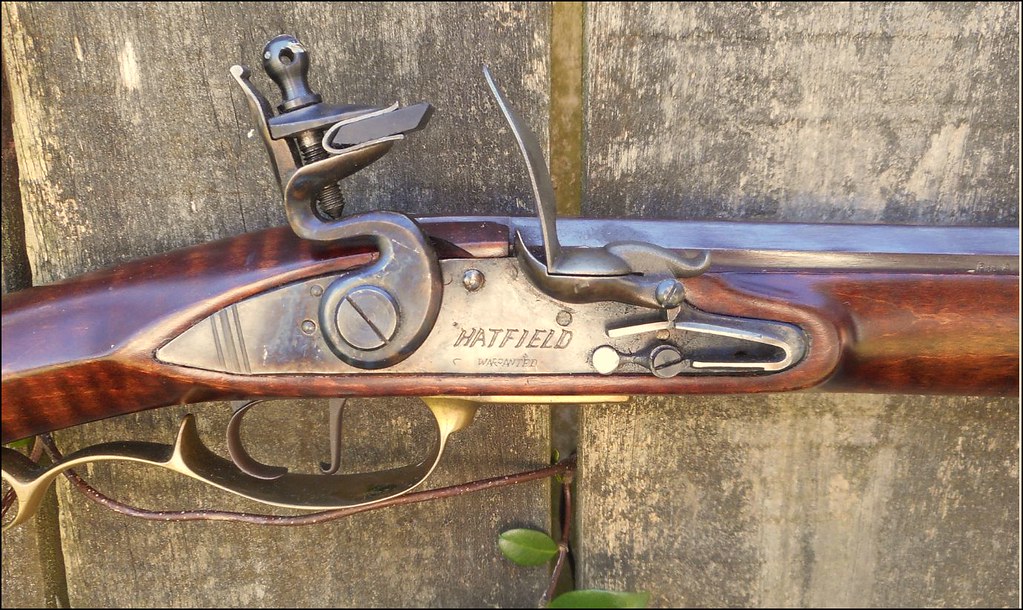 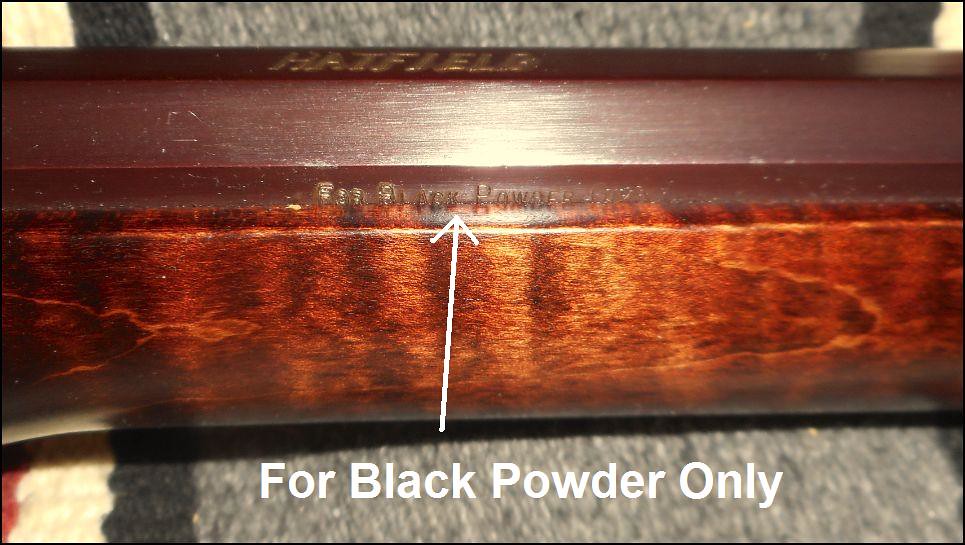 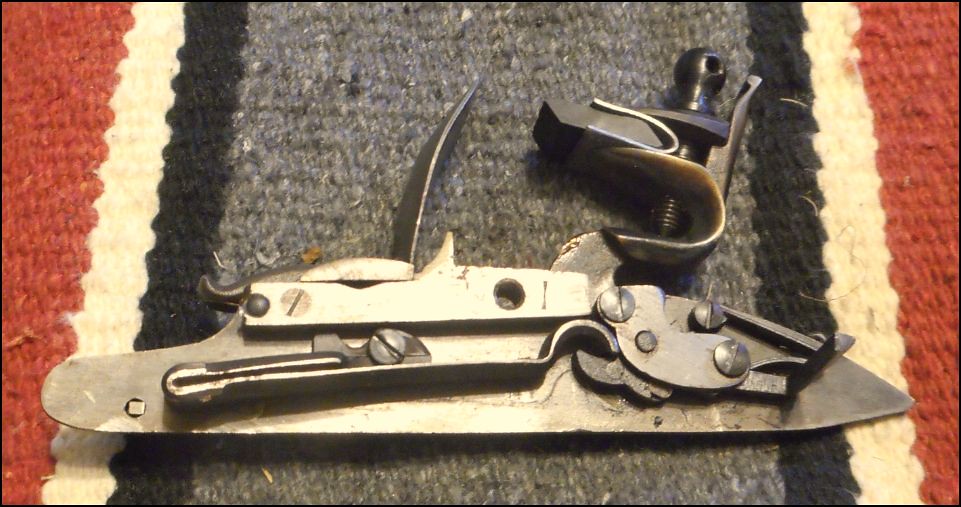 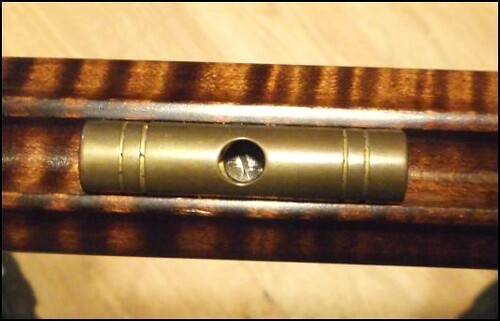 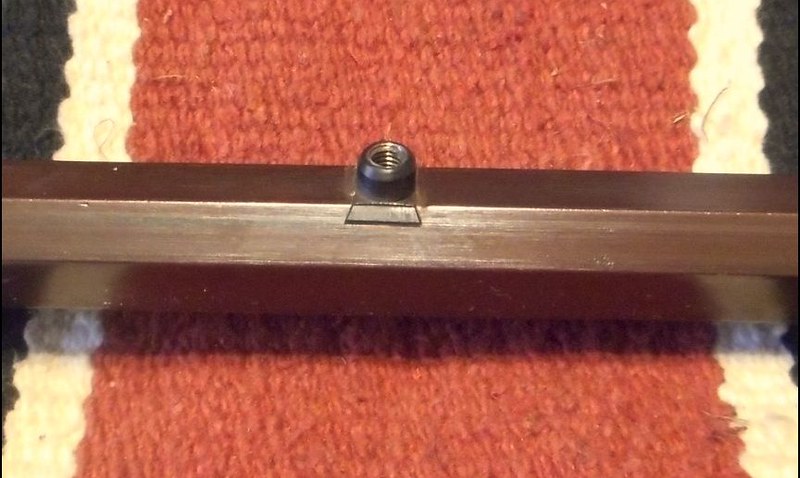 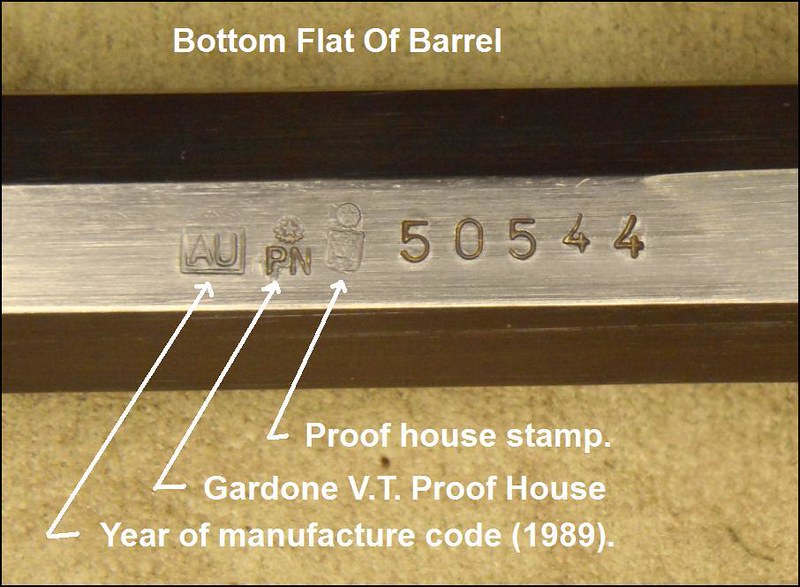 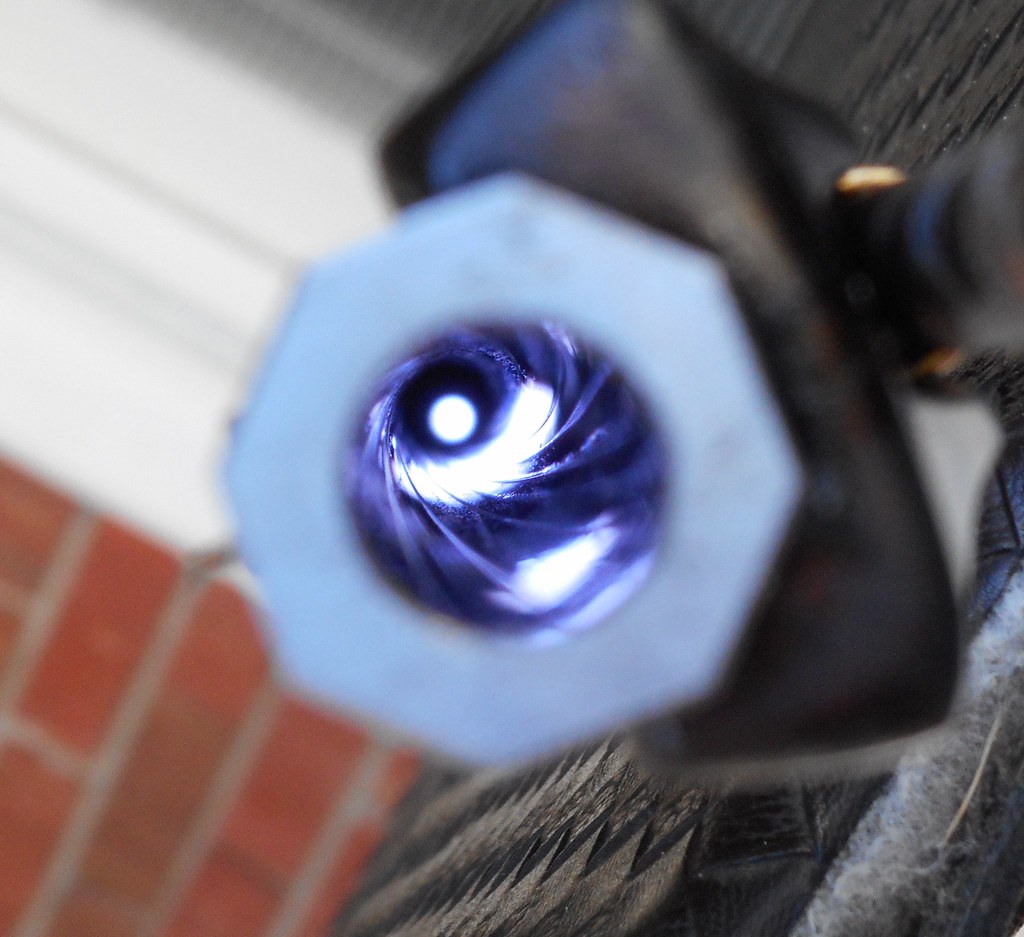 My brother inlaw had one in flint that was extremly accurate after he learned to stay still when pulling the trigger.HE won alot of matches with it and was shooting every chance he got.IT started loosing accuracy after a 1000 shots.My father said it might of been a softer steel they used to make the barrel.ive seen a caplock that was fiberglassed bedded.

RedA said:
Cositrike - sorry about that, all I saw was Bob.
Any info you can give me about the Hatfield would be appreciated.
I think it may be possible the serial number is on top of the barrel, underneath the long tang peep sight.

My local muzzleloader shop said that if it was made by Perdesoli, their name would be "ground off" the underside of the barrel.
Do you know how to take the gun barrel and lock off the stock so I can check this? Is this something I need to have a gunsmith do?
I'm usually quite capable on these types of things.
Click to expand...

1986 should be Hatfield, rather than Pedersoli, I believe. Mine has the number on the angled flat near the breech. Good guns. Good barrels. Mine is very accurate

Semisane, nice job on the pictures. I wonder how it is that your .50 has a one in 48 twist? I never knew the Squirrel Rifle was offered in anything but a slow twist for a .50 caliber. Also, the Hatfields had browned barrels but yours look blue. Did you refinish that? Greg

I own a .50 cal flintlock semi-custom Hatfield with a gorgeous stock. I have searched thoroughly and there's no serial number. Here in the UK everything that you intend to shoot must be registered with your local Police Authority and they have a serious problem when guns aren't numbered! It's on my Firearms Certificate as '.50 Cal Muzzle-loading Rifle NVN' (No visible number).

In 86 I believe Ted Hatfield built it but by then pretty sure barrels were made in Italy. My 87 and 88 have Italian barrels.
S

Critter Getter said:
Semisane, nice job on the pictures. I wonder how it is that your .50 has a one in 48 twist? I never knew the Squirrel Rifle was offered in anything but a slow twist for a .50 caliber. Also, the Hatfields had browned barrels but yours look blue. Did you refinish that? Greg
Click to expand...

It's a browned finish CritterGetter. The finish is not as smooth and polished as the Pedersoli model. It's more of a very dark brown color as opposed to the lighter brown of the Pedersoli. The camera didn't pick up the true color very well.
R

I would say my barrel is a dark brown, not quite as dark as the stock. see better photo
My local shop claims that the Hatfileds with Pedersoli barrels will have the Italiian name ground off on the underside.
I've begun a conversation with Green Mountain to determine if there were any distinguishing marks on the barrels they made for the Hatfields.

As you can see it has the L&R Co. Warranted lock

The history and chronology of changes on these rifles is quite interesting.

I had a later Pedersoli. It had lots of shortcomings. The lock needed significant tuning. I bought an L/R but did not see any improvement. The original lock was OK after the necessary tuning. The breech plug is extremely long. The liner penetrates the side of the plug, like CVA. The hole down the plug was too small for reliability. After I drilled it out, and opened up the liner reliability became nearly acceptable.

Stylistically it has problems. The ramrod pipes are screwed to the barrel through the stock. This is a cheesie non HC way to do it. The trigger guard lays on top of the stock, same objection. The shaping of the stock is weird. The buttstock has a weird shape and teenie but plate. The wrist has a strange cross section. The forend it way to fat. Mine had no entry pipe or nose cap. I sold mine after addressing these deficiencies. The new owner likes it fine.

I can find fault with most anything, that is about me. After I sold the Hatfield I build three really nice traditional and HC long rifles. Problem solved. : )
R

Thanks for your input...it takes a keen eye and knowledge to spot imperfections.

Also probably easier to do, when you have the skills to make your own.
I shoot for perfection but often disappoint myself.
R

Critter Getter -
SInce you own two Hatfields, you seem to be a knowledgeable resource for me to turn to.
I'm hoping you'll give me some input.

Before trying to take the Hatfield apart ourselves, my brother contacted my dad's old hunting & gun buddy to start with. This fellow recalled that dad bought it in the late 1980's from Hatfield.
He remembers that they took this rifle apart many years ago, but didn't remember a serial number. When asked he said it did appear that the bottom of the barrel near the lock had been machine ground with faint writing underneath. The sad thing is this guy could barely tell you what city he lives in now at 96 years old.
Odd how the memory works.

Anyway this would tell us that it's likely a Pedersoli barrel w/ a L&R percussion cap lock.
I don't think either my brother or I are destined to keep either of the muzzleloaders we inherited.

What do you think the best way to sell these is? This forum or Gun Broker?
1. The Springfield Hawken 50 caliber percussion - looks like a basic utility gun ,no fancy wood, no rust, * clean bore, needs the nipple barrel adjusted (turned) so the nipple is more closely aligned with the lock, also needs a nipple 6-1mm #11. This was originally our other brothers gun and I'm quite certain it has very few shots through it before passing on.

2. The Hatfield 50 cal. percussion - much nicer maple wood - barrel is a dark bronze color, it appears there is some very mild discoloration where the stock meets portions of the barrel, * bore looks clean, everything else appears to be quite nice. no scratches in the stock, a couple small blems in the barrel exterior finish
Besides being shot 40 - 50 times it mostly hung in dad's den. on a scale of 1 - 10; 1 being junk and 10 being new, I think this would be at least a 6.5 - 7. I'm quite certain that it never got into the woods but only shot in the yard.

* I dropped a small LED light down the bore to look for pitting or corrosion - nothing but shine. Dad was a stickler for keeping his guns clean.

I can provide more pictures of either, if it helps.

I've bought and sold a few guns, and thus realize a gun is only worth as much as someone will pay on any given day. Usually there is a range where everyone feels they got a fair deal. That's what we are aiming for (pun intended).

We appreciate your input.

Jeff, I’m no expert but i do own my fair share of front stuffers! If I was going to try and sell one of my black powder rifles I would try the classified section of this forum first. If you don’t get the money that you feel you want then throw an add on Gunbroker. I haven’t sold many muzzleloaders but did move a CVA Squirrel Rifle a few weeks ago from this forum and never even had to put an add in the classifieds. I responded to a want add and had several people pm me. Greg
V

I dug out the Hatfield barrel im reusing. Heres some pics

Thanks for the images showing the serial number location on the Hatfield barrel.
V

RedA said:
Thanks for the images showing the serial number location on the Hatfield barrel.
Click to expand...

No problem and thank you guys for reminding me to complete this project, Will be a Hatfield 39" .50 on a CVA Mountain Rifle stock with CVA lock and other hardware, TC patch box, triggers and Trigger guard (plus anything else from the shop drawers. FWIW it might come out as a kinda stump rifle as point of balance is way back just in front of TG. Barrel shown in unfinished state after adding under rib and thimbles i made in shop on my machinery . Not sure who made the wedges or lugs.
You must log in or register to reply here.
Share:
Facebook Twitter Reddit Pinterest Tumblr WhatsApp Email Link