Anybody made a roundball mold?

I'd like to make one and would like to hear from those who have done it or tried and were unhappy with the end product. Any advice from you would be appreciated. If you ain't tried it please don't try to discourage me, I'm too old for it.
Dave

I've made a round ball mold and I'm happy with it. It could of been any size but for my needs it is 1.740" ball. This took about an hour to program and run. 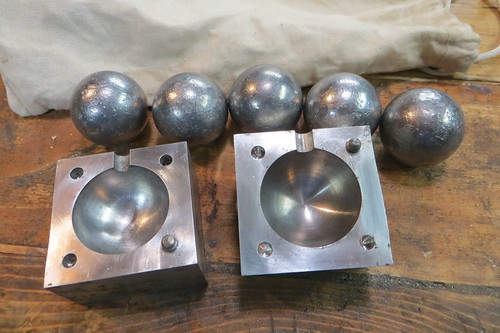 Did you make your own cherry or did you acquire one?

I made one out of some soapstone that I had. Used a Dremel to hollow it out by eyeball. It didn't work all that well but I did have a more or less round ball that would go down the muzzle. If I was to do it again, I'd concentrate on making a Buckshot mold instead.

I have a friend that worked in a large aluminum plant and is and was as crafty as they come. He needed a round ball mold for a 12ga smoothbore flintlock he made out of a modern barrel, he never bought anything he could make.

He took the right sized ball bearing, sandwiched it between to blocks of aluminum and dropped huge multi ton piece of steel on it with a press at work.

He trimmed the blocks, put a casting gate and handles on his creation and started pouring lead. This mold was really crude and cast a slightly off center ball but it got him shooting.

When I built my 12ga fowler I ordered a mold from England and borrowed his mold to cast a few balls to test my gun. His mold cast a crude ball but patched they shot just fine, I suspect with this big of a chunk of lead a little variance in perfection didn't matter.
V

I made a RB mold for slingshot use and it casted 5/8 dia lead balls. Squared up 2 blocks and ground them flat. A ball cutter was used to cut the cavities and went slightly deeper than .3125 and ground off the excess and the depth was checked w/ a depth mike. The cavity is just breaking through the edge of the block for a minimum sprue remnant. The cavity finishes were fairly smooth and to aid the ball cutter, a 3/16 dia hole was drilled just short of the depth to compensate for the ball cutter's web.

A .625 ball bearing was tightly clamped between the 2 mold halves in a large vise and the halves were aligned w/ a dial indicator and the 2 pairs of guide pin holes were drilled and reamed for a press fit w/ the guide pins and then 1 cavity block was reamed again to supply a slip fit w/ the guide pins. A sprue cutter plate was then attached and a very minimum sprue remnant was present which we didn't trim off. Both the cavity blocks and sprue cutter plate were made from unhardened tool steel.

Attached the cavity blocks to commercial handles and used the mold for many yrs. A .625 dia. {slightly smaller because of shrinkage} might seem too large for a slingshot projectile, but the slingshots used surgical tubing which was capable of imparting sufficient speed to the large ball for a reasonable trajectory. A side benefit of the large ball was that it was visible in flight which then allowed compensation. Later on tried .490 lead balls but these were not visible in flight, so discontinued their use.

The slingshots using these lead balls killed many cottontails, gray squirrels and a few pheasants sitting on the ground. We hunted wild and park areas in the city and always had to be aware of law enforcement......Fred

MC One Shot said:
Did you make your own cherry or did you acquire one?
Click to expand...

This way of making the mold required no cherry, I programmed the mill to drill a bolt pattern of four for the guide pins then mill with a half inch ball end mill to machine the cavity. This was repeated after shifting to the side for the other half.
1

No CNC , just an old Craftsman 12" with a milling attachment. Any suggestions? I'm going in the .25" range.
Dave
E

Made one from soapstone for my .32 CVA. I think that there is a thread on here somewhere about it
have not used it in a while but it works quite well

1950DAVE said:
I'd like to make one and would like to hear from those who have done it or tried and were unhappy with the end product. Any advice from you would be appreciated. If you ain't tried it please don't try to discourage me, I'm too old for it.
Dave
Click to expand...

Anybody made a roundball mold?
No but I've had great luck with getting bread to mold.

WATCH OUT FOR THE BLACK MOLD, NOT GOOD, BUT IT IS A KILLER!
M

have made two. Both to be used with the old Numrich barrels that are notoriously tight! my buds .31, uses the recommended 0.295 dia. ball.
My .36 uses a 0.340. Turned both cherries by hand on my lathe. hand filed the teeth and Kasenite hardened them. The mould blanks were
faced aluminum blocks and I cut the moulds using my drill press..< pre mill days >

trick about aluminum is the heat expansion coefficient. the mould will expand and cast an over-sized ball if the cherry is dead on size. Consulting
my Father-in-Laws Machinist's handbook.. I cut mine 0.004-5 smaller. ( .291-.290 and .336-.335ish )

Both cast nice looking and straight shooting balls.. what more can I ask??

So, though I have not done it, the traditional technique is as follows:
Forge a cherry on a shaft and file the ball to rough over size dimensions.
In a steel plate about 1/8” thick and perhaps an inch and a half square drill a hole the desired ball size 1/4” to 1/2” from an edge. Saw and file a wedge shaped channel from the hole to the edge. This cutout is to allow the shaft of the cherry to pass.
Now you have a plate with a cutout the shape you want the cherry to be.
File one face of the plate flat. Flip over and file the backside of the cherry hole to relieve it so the hole is still round and unchanged on the flat face, but now the hole has a sharpened edge. Harden the steel plate by hardening and tempering if spring steel or an old wide file that was annealed. If mild steel, case harden it.
Now chuck up the forged cherry in an egg beater drill. Spin that baby rapidly with the cherry parallel to the face of the plate on the flat side. The neck or stem of the cherry fits into the slot. You are now making the ball on the cherry nearly perfectly round as it settles sideways into the hole.
You might stop, inspect, and hand file high spots to speed things up and use this to direct your efforts and put a final shape on the ball.

Once the ball is made, paint it with dykem and file teeth on it like a ball grinder bit. Now you have the right size cutter for your round ball mold blank.
R

I made a double cavity .670 round ball mold. The guy I made it for says it works great! 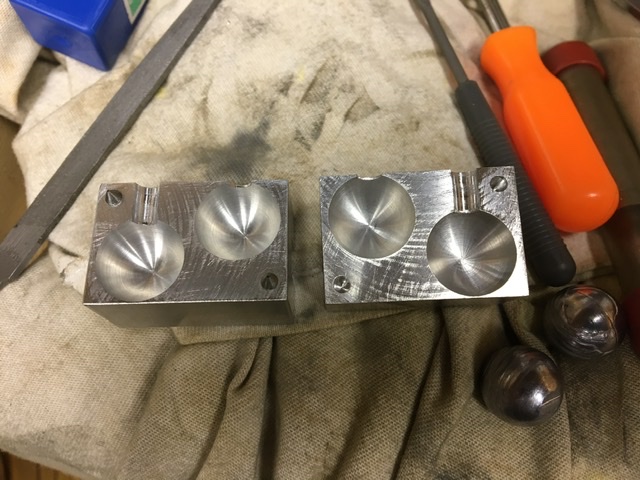 I usually make these: 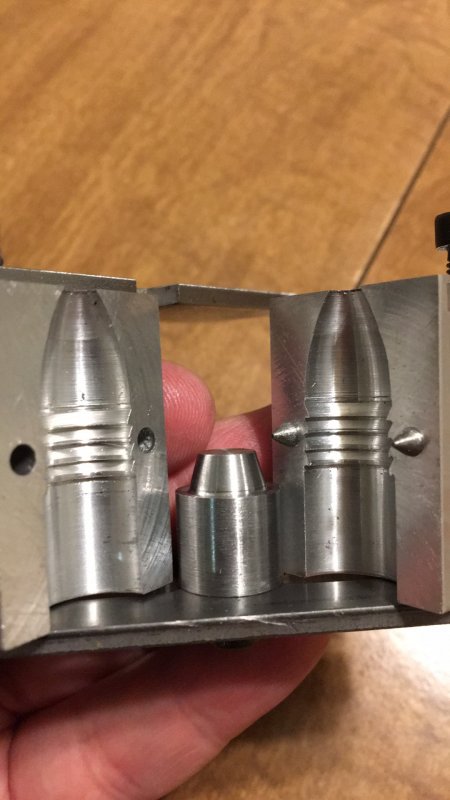 I've never made one, but the idea of making your own has been around for a long time.

The Pennsylvania Gazette
January 5, 1748
From the GENERAL MAGAZINE.
A New Method of making BULLET MOULDS.
"THE Badness of the Bullet Moulds brought into America for common Sale, and the Difficulty of meeting with one of them, bad as they are, that will fit one's Gun , will render the following Invention, for making (easily) true and exact Bullet Moulds, agreeable to all Lovers of good Shooting. First provide yourself with two Pieces of Lead about an Inch and Half, or two Inches Square, and half as thick, and smooth their Faces, so that when joined they may make near a Cube; then get some Marbles (such as Boys play with) from the smallest to the Size that fits your Gun, oyl or grease the Marbles and Lead well; and with the Assistance of a Smith's Vyce, with two flat Pieces of Iron in the Chaps of it, press the two Pieces of Lead with the smallest Marble between, till the Marble be quite sank in the Lead; then put in the next greater, always remembering to keep the Lead and Marbles well oyl'd do thus successively, till you have brought it to the Size you want: And, to prevent the Bullets having Edges, smooth the Faces of the Mould, and press in the same Marbles several Times, by which Means you may make Moulds of wonderful Exactness. Then cut a Gate and fit the Corner with Pins, to keep the Pieces in a proper Position for casting. When you use it, smoke it well, and take Care the melted Lead be not so hot as to burn Paper."

In an earlier discussion of this idea a TMF member made one, and it worked.

A lead mold made from lead, Genius.

I shall have to try that.
R

Carbon 6 said:
A lead mold made from lead, Genius.

I shall have to try that.
Click to expand...

I wonder how they kept the mold from melting or the ball fusing with the mold?