Laurel Mountain Forge Browning Solution offered by Brownell's , Midway USA, 'several other vendors' ... and, available directly from Laurel Mountain Forge...
CAN BE USED AS A BROWNING AGENT or with boiling in distilled water and carding of the scaly blackened rust away between applications....
it can be used to 'RUST BLUE'....for a true factory type Blued finish. Larry Potterfield of Midway USA has offered excellent how to videos educating 'how to' do this.
J

Larry (Omaha) said:
I am in the process of making a half stock, underhammer. I have browned several barrels, but never blued a barrel and receiver. Since there are so many products to use, I would appreciate some recommendations on products that your experience proves to be a good one. Please, no opinions on what you have read, or Joe your brother said was good. This post only applies to anyone who has had first hand experience, with cold bluing products.
Thanks
Larry
Click to expand...

The differences between browning and bluing are minimal..

In addition to the typical traditional steps involved with browning....

BOILING the 'brown rust' to chemically change it to black or blue rust....
after each browning layer.

Then, after boiling the brown rust to black or blue...
buff or 'card' off the scaly top layers of black rust.... between layers.

This rusting, boiling, carding or buffing off can be done with steel wool "by hand"
or a rotary power tool fitted with a stainless steel wire wheel... spun at slow to moderate speeds knocks off the top scaly layers.

Then repeat rusting, boiling, carding or buffing ...
until the desired appearance can be seen.

IT can be A VERY TIME CONSUMING PROCESS.

***BOILING TANK and *chlorine-free-distilled water*... are necessary for proper effect.

Warning:
Boiling in Chlorinated tap water... will spoil it or ruin the process, somehow.
T

Even "cold" blue" of any variety works better when the barrel is as warm as you can comfortably work with it.
M

I'll continue to stick with 44/40. Never let me down. Clean good with alcohol and a little heat.

Larry (Omaha) said:
I am in the process of making a half stock, underhammer. I have browned several barrels, but never blued a barrel and receiver. Since there are so many products to use, I would appreciate some recommendations on products that your experience proves to be a good one. Please, no opinions on what you have read, or Joe your brother said was good. This post only applies to anyone who has had first hand experience, with cold bluing products.
Thanks
Larry
Click to expand...

If you browned barrels, then boil them between coats and you then have rust blue. Rust blue protects, cold blue does not. Check rustblue.com. More authentic too. Easy.

I second the Blue Wonder treatment. I have done a couple of guns using it and, after learning that I wasn’t getting the metal warm enough, got great results. I had dismal luck with the BC Brand. Maybe someone has some advice about using it?
S

If using LMF to rust blue, you do not have to boil after every application. Just boil after the final application. I have done it both ways and there is no difference.
O

I have slow rust blued several double barrel shotguns and just finished a .22 rifle. I have also tried Oxpho Blue, Birchwood Casey and Wonder Blue. I will take the slow rust bluing any day.
L

Brownells Oxpho Blue in the cream version. We want the stuff to stick, not just run off like the liquid version does. Then you need some three ought (000) or four ought (0000) steel wool. Steel wool is oily so soak it in a jar of alcohol to get the oil out. Likewise degrease the barrel and don't touch it with your bare fingers afterward. Apply the Oxpho with the steel wool and rub it in. Add more as needed and don't be afraid to change pieces of steel wool. Rub in long strokes. The more you rub the deeper the blue up to a point. Wipe clean and apply the oil of your choice.
John

I also use Mark Lee rust blue product and find it very easy to use and produces a great job that lasts. I use just my tap water and a steel gutter section on top of my stove. I polish the barrel with a course fabric like denim or canvas then oil or wax. 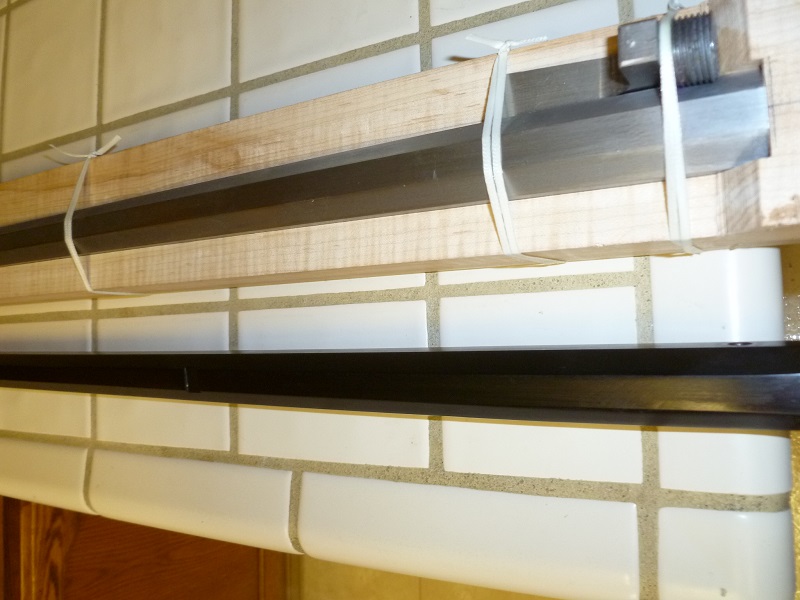 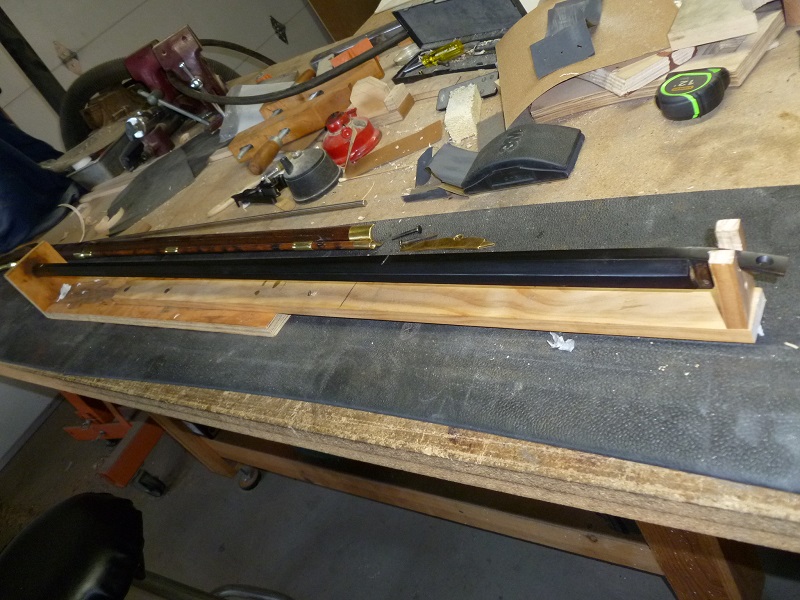 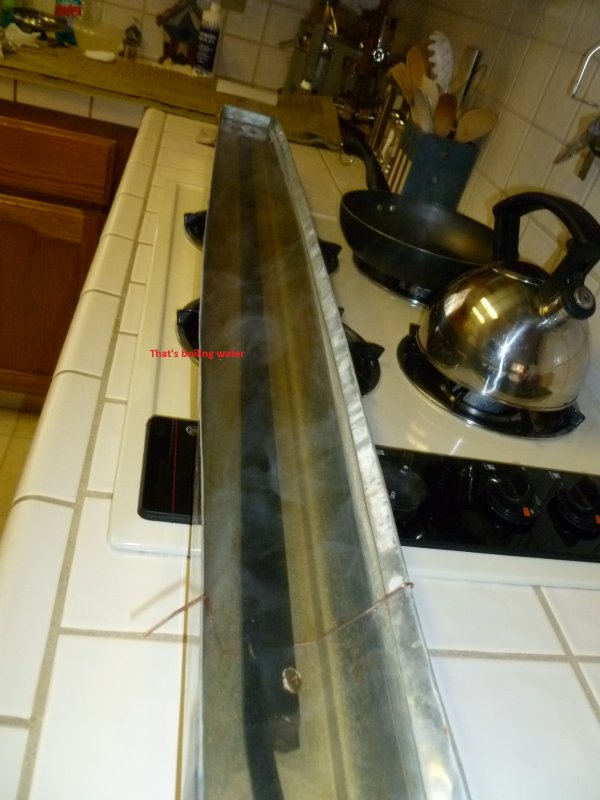 Haven’t used it myself, yet, but some of the guys here have gotten great results with the Oxpho Blue Gel on armour and sword parts. Sadly, everyone is sold out right now- I spent an hour last night trying to track down a bottle, and finally registered with Brownells for them to call me when they get it back in stock.
Jay

I know the barrel bluing process was used by the time of the Civil War, but does anyone know when it actually started?

griffiga said:
I know the barrel bluing process was used by the time of the Civil War, but does anyone know when it actually started?
Click to expand...

I believe it goes back to at least the mid 18th century.

When I use the Laurel Mountain solution, I have a PVC pipe I cut in half and glue end caps on. I boil the distilled water, then pour that over the barrel in the PVC pipe and let it sit, I think for 5 minutes. Pull it out and let dry off then clean off the scale with very fine steel wool. Wipe the barrel clean, wipe on the solution again, then hang it in my basement over a bucket of water for 12 hours. Repeat until you got the deep blue you want.
H

+1 for Brownells Oxpho-Blue. I’ve only tried the liquid but have heard the paste works wonders too. Burnish with 0000 steel wool between applications and you’ll have one of the best at-home blue jobs possible.
R

I used LMF to rust blue my last rifle.

Another vote for Oxpho as a cold blue, but only the gel. I have my own system. I slather on a generous coat of gel and allow it to start working. Then I begin stirring the gel with an acid brush to keep fresh gel next to the steel. I keep this up until the gel turns a nasty shade of green. Repeat two or three times and you'll have a very even deep blue-black. Just for the heck of it I polished a hatchet head i was modifying to mirror bright, about 1500 grit, and applied Oxpho gel using my method and it turned out quite well. Although it has seen a lot of use the blue has held up fairly well.

I'm going to build a steam box and rust blue a bunch of modern rifles I'm working on.

ETA: I do think my method with Oxpho would probably work even better on warmed metal, as mentioned above. You can do very large areas at a time using my method.
M