Yes or No on tacks

I'm in the NO TACKS camp. While I have seen some guns that looked nice with tacks, it is difficult to pull off artfully and tastefully. But beyond the aesthetics is feel. Tacks physically alter the feel of your gun. For me this is a bigger deal than looks alone. I can have the same issue with the placement of inlays too.
IMO, "feel" is critical to being able to shoot the gun accurately. After all, it's an extension of you.
Sometimes they feel like a pebble in the shoe to me.

My 2 cents, worth every penny.

Ballshooter said:
So this is my GPR in .54cal love it but, the stock to me needs something little to give it some bling. I found some brass daisy tacks and it just so happens I named her Daisy So I took three and cut off the nail at the head and just put some bouble side tape on to see how she would look..hmmm I kind of dig it what do the rest of you guys or gals think?
Click to expand...

Take a beautiful woman and place tattoos all over her face. Did that improve her beauty? No tacks for me! My opinion.
It is your rifle, so install the tacks if that is what you like. Don't like, or do something just because everyone else likes it. It needs to be what you like.

Real brass tacks are hard to find, they are mostly Chinese which means steel plated w brass. On Etsy the nice ladies all claim then to be solid brass. Uh-uh.
I THINK the Indians used cast brass upholstery tacks on their rifles and old antique brass upholstery tacks are still available in small lots. Suggest you look for antique tacks and avoid anything modern.

I had been planning a Leman with brass tacks, but the decades seem to be adding up right now. We shall see.

Notchy Bob, above, seems to know something about tacks.

No for me, but I’m not very flashy
R

I vote no tacks. But it is your choice not mine. Good Luck

Personally, I don't like the tacks. A friend has tacks on his T/C Renegade, his choice. It's your rifle. Make it the way you choose.
T

No tacks ever on a gun!

The ugly gun.
When I build a gun I try for the very best job I can. I’m real good at turning $800 in parts in to $400 guns.
I’m ok with that.
How ever lots of old guns were not the masterpieces we like to carry. Everyone who has said no has went on to say it’s your gun do what you want, and that’s best advice
These are historic guns that have seen use
Imagin you on the frontier. Tacks come in handy for repair, but how do you carry them?
Stuck in a stock is handy.
What do you do if you don’t want them?
Ask any one with an embarrassing tattoo 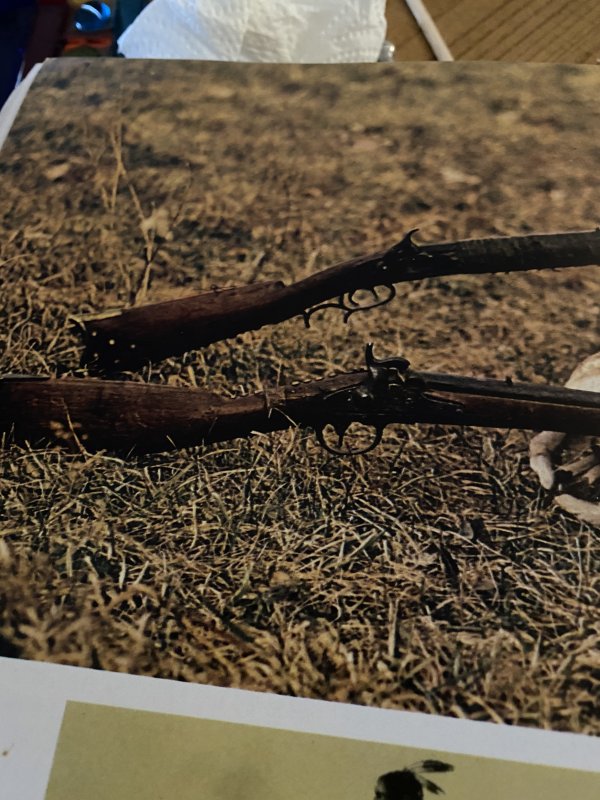 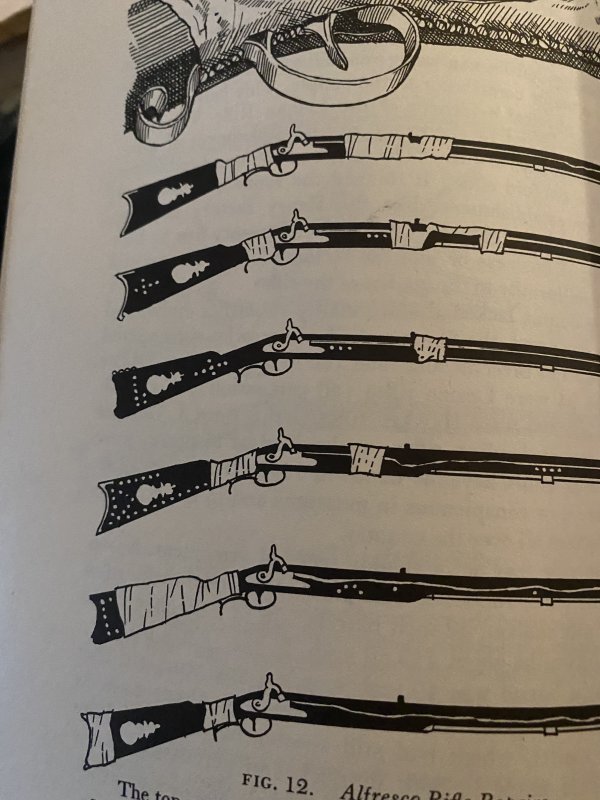 My ‘favorite’ part of tacks on a gunstock is when they snag your beard and pull a chunk of hide from your face.

I bought a used trade gun that was tacked not too long ago. While I've come to overlook the tacks because I love the gun I sure don't like them.

I vote "yay".
Tacks will improve your grip, and make it "yours", different, and stand out from everyone else's.
Tacks were added to stocks by owners "back in the day", so you have historical precedence, if you're worried about such.

Would look much better without them.

I think they look cool on old Indian rifles, but I wouldn’t put them on any of my guns.

I wouldn't put them on any of my rifles. The decision is yours, they will illustrate something that you want to say about your self and your weapons.
L

I believe if you research you will find primarily natives put tacks on firearms, and they would be rare on pre 1840 arms. They became more common and many more used in the later post civil war period.

it's your firearm. If you're preferential to tack adornment, go for a complimentary, period-correct arrangement.

The Interarms Lyman GPR has such beautiful lines & construction to it that, in my opinion, it needs nothing additional for enhancement. Even the walnut stock is attractive even without applying stain. A simple, carefully-applied, hand-rubbed finish will reveal such gorgeous, unique grain with a hue of darkened honey. It has all this going for it, yet it's ruggedly built & a real tack driver.

You have an enviable rifle there, so I hope whatever you decide will do justice to the GPR.

As usual Notchy Bob is on tack, er, on track. OP if you can find some old vintage tacks I'd vote 'yes' on your idea.


Notchy Bob said:
I would say no, especially to the daisy heads.

I've actually researched native tack work, and had an article about it published in Muzzle Blasts in 1981. It can give some guns a lot of character, but is easily overdone. The tack work can also be difficult to reverse, if you decide you don't like it. Probably the best way is to file the head until you've gone deep enough to release it from the shank. Then you can pull the shank without having to pry the head off. You'll still have a hole to deal with, and a ring shaped impression around it. I know your tacks are just stuck on temporarily, which was smart! Sort of like a temporary tattoo...

You also see a lot of old guns with native provenance with split or broken wood on the forearm. The wood is very thin there, and they probably just pounded the tacks in. You would be wise to drill a slightly undersized pilot hole first.

I have never seen a daisy-head tack on an old, original gun. I've never seen any of those "faceted" upholstery tacks on one, either. The old-time tacks were cast of brass, with the shank and head in one piece. The shanks were square in cross-section. As far as I know, the were available as smooth high domes, low domes, and cone shaped only, and you typically see mostly the high-domed ones on guns. Modern tacks are available in all sorts of shapes, and they always have steel shanks, unless you can find authentically cast tacks from a restoration specialist. When you can find authentic tacks, they tend to be expensive.

There was an extensive thread about tacks and other embellishments on this forum a couple of months ago. I remember it had "Bling" in the title. If you do a search for "Bling," you ought to find it.

The bottom line is that it is your rifle, and you can do anything you want with it, but bear in mind that tack work is more or less permanent. If that will be one of your "forever" guns, that's great! However, if you ever want to sell a rifle with daisy-head tacks on it, be prepared to accept a lot less than you would like.

SDSmlf said:
My ‘favorite’ part of tacks on a gunstock is when they snag your beard and pull a chunk of hide from your face.
Click to expand...