What you can do with a Cold Steel Frontier Hawk

In the interests of seeing what I could come up with to make a reasonable facsimile of the common wrap-eye, poll-less, "tomahawk" type 18th century belt axe, for minimal cash outlay, I did this little project.

There is NOTHING out there readily available that really looks like an 18th century axe as-is. Some come sort of close, but require modification (and cost considerably more). My H&B Forge throwing hawk makes a fine reproduction.. once the flare is cut off the top of the bit and other work done to it. The "throwing hawks" are designed to "stick" in every direction as much as possible, so the bits flare out quite a lot, which just isn't seen on period axes. 18th century bits are long, straight, with very little flare. One can take one of the cheap India/Pakistan hand forged "tomahawks", and grind it to a better shape, but the supply of these seems to be drying up. I also have no idea as to their quality.

Enter the Cold Steel Frontier Hawk. This thing is $35. Available virtually everywhere. They sell zillions of 'em. They're drop forged (meaning forged in one stroke in a set of dies) in Taiwan (anti-communist, nationalist China), 1055 steel. This is a medium carbon steel, tough, but won't ever get super hard. By filing the edge, I'll guess that the hardness of the bit is about Rc50, more or less. It ain't a Kelly Flint Edge, but it doesn't need to be.

Now, right off, there's a couple things that you'll never be able to fix about it. The eye height is pretty narrow. If it was about a quarter inch taller, that would be great. Also, the eye shape. It's a long oval teardrop-ish shape. Which makes for a nicer shaped handle, but 250 years ago, the common eye for this type of axe was nearly round. But, nothing you can do about that, unless you forge it out to a different shape, but if you can do that, you don't need me telling you how to modify a cheap Cold Steel axe.

Ok, first is the stupid set screw. Take it out and toss it away. It's metric, of course... ugh. The thread is close enough to a 12-28 that I was able to thread a screw in. The object is to make a plug. I fitted the plug, and silver soldered (meaning real silver solder.. not that "silver bearing" solder) in place on the inside, and peened it out on the outside and filed it all flush. It now is nearly invisible. If you can weld (I CANNOT, no matter how much I have tried), plugging the hole would be an even easier task. 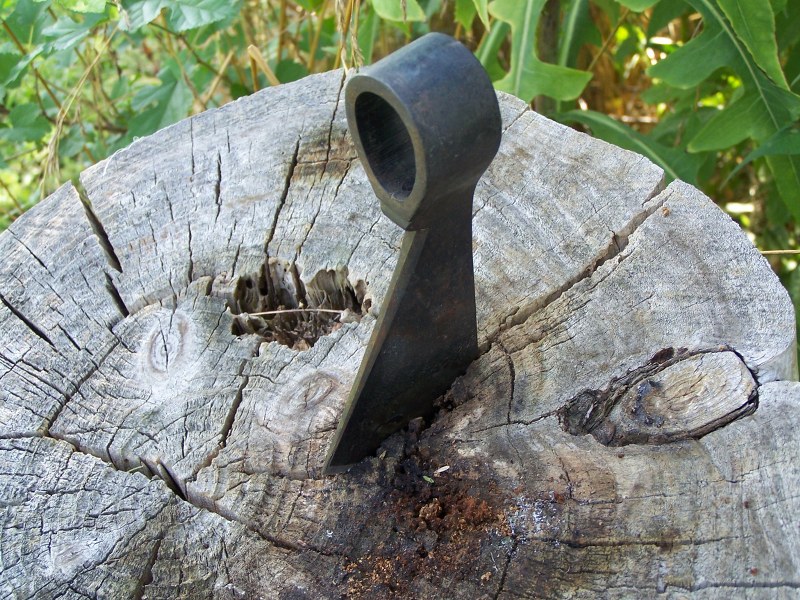 The handle also has to be properly fitted. The one that came on this particular axe was rather undersized. I had another one from another project, and that's what's on it now. I could have fitted the head a bit further up on the flare, which would have filled up the eye better, but, doing so would have exposed the hole in the wood made where the factory cranked down the stupid set screw. If starting with a new handle, you could do a better job. But, even with a couple small gaps, it's TIGHT, and it ain't goin' nowhere. 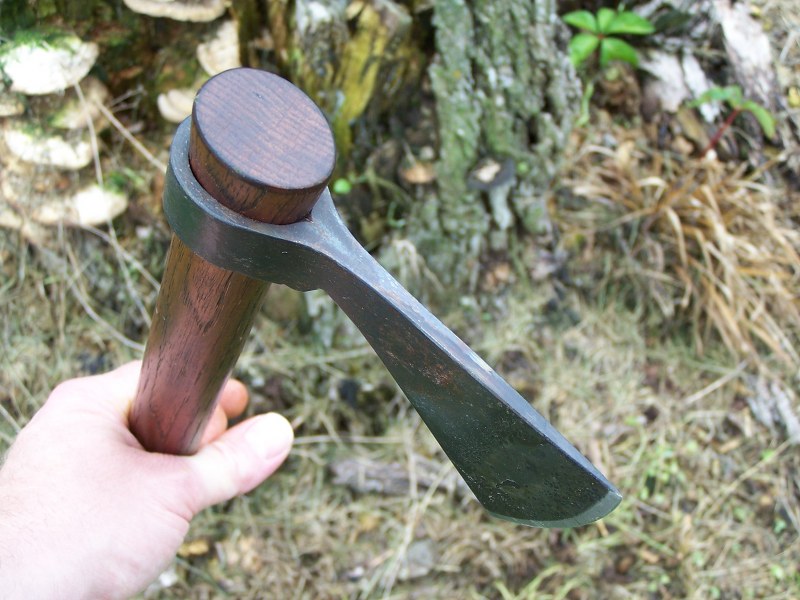 Now the head shape. Some of the flare on the bottom of the bit was cut off with a Dremel tool (get you some of the cut off wheels that use the snap-lock mandrel. Those things are freakin' awesome! Much better than the standard type). Then I ground and filed it all smooth, and reshaped the "notch" on the bottom of the bit and filed a little bead shape, just because. The "fillet" area where the bit joins the eye needs attention. It's too full, and needs to be ground down thinner to make it look at least a little more like a hand forged axe. Just grind the sides down and file it up. This makes a world of difference in how it looks. You can see in the above picture the difference from the original shape. That's about it. I evened up the finish by wrapping the head with a paper towel and soaking it with bleach, so now there is an overall etchy surface, followed by cold blueing. 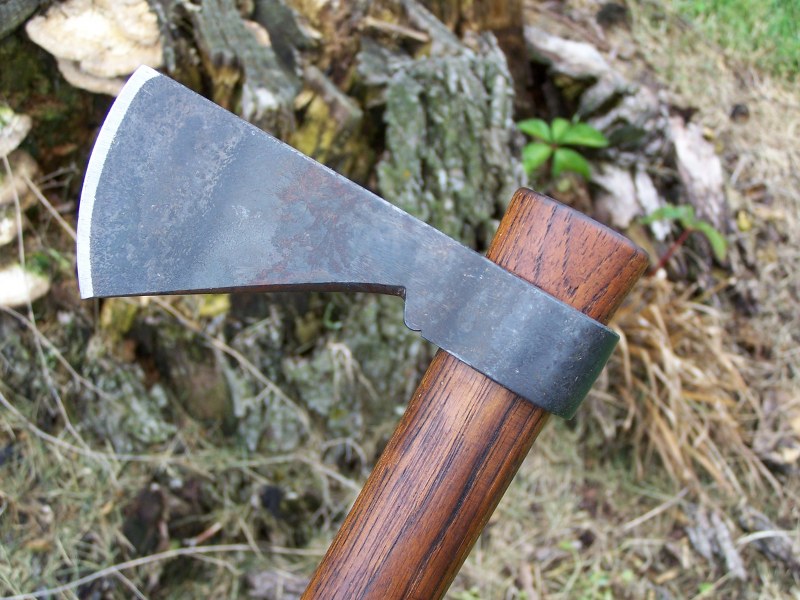 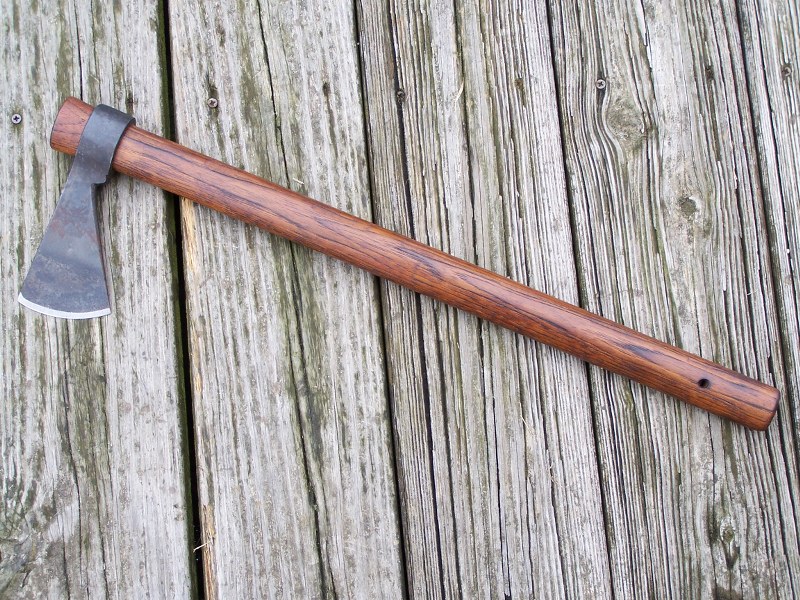 It actually came out better than I expected, and I really like the thing. Does it really look like a hand forged 18th century axe? No, of course not. But it works like one, and looks good enough from 20 feet away, and I think it makes a good reasonable facsimile for those not able to spend $100 or more on a real hand forged axe.
Last edited: Jul 6, 2020

Nice! I talked to an older gentleman last year at an event in the Valley of Virginia who had a fantastic hand-forged tomahawk with the correct flat profile on the top and some faded maker's mark I didn't recognize. He had no idea why I kept asking him about it since he kept replying that, "you can get these from any old sutler" and he didn't care that whoever made it took pains to get the details right. Unfortunately, he had some sentimental value to it so he wouldn't part with it for trade or money.
F

I always wanted one, just never could figure out what to do with it. They do have eye appeal.

How did you get the Hickory haft to stain that dark?

Shiloh1944 said:
How did you get the Hickory haft to stain that dark?
Click to expand...

Well, it was colored with Aqua Fortis, as I would do a rifle stock, but when I was heating it (with a propane torch), I carefully toasted it a little bit to darken it even more. Which is not so easy to do. It will very quickly turn black when you don't want it to. The open pores of the grain (which will weirdly look very light if you just leave it at that) were filled and darkened with a plain Minwax dark pigment stain.
D

Take a look at what Shilo 1944 did/ does to his tomahawks. He posted photos of his projects on 30 April in this section. He has I think two posts. Good information and ideas.

Stophel said:
There is NOTHING out there readily available that really looks like an 18th century axe as-is.
Click to expand...

Curious statement. It is not likely all village blacksmiths made their hawks to a fixed standard. Some will argue, but I don't believe there can be a certain shape that is the one and only 'correct' for an 18th century ax or hawk.

Rifleman1776 said:
Curious statement. It is not likely all village blacksmiths made their hawks to a fixed standard. Some will argue, but I don't believe there can be a certain shape that is the one and only 'correct' for an 18th century ax or hawk.
Click to expand...

Meaning, yours is 'correct'. Who can argue that? Enjoy. FWIW, the current standard of the cutting edge being no more than 4" came about with an NMLRA rules change to prohibit the use of very large, viking style, axes in competition.

Rifleman1776 said:
Curious statement. It is not likely all village blacksmiths made their hawks to a fixed standard. Some will argue, but I don't believe there can be a certain shape that is the one and only 'correct' for an 18th century ax or hawk.
Click to expand...

Perhaps you have not studied extant 18th century axe heads.

Stophel, The head below is cast from an original, complete with rust pits and even a few forge marks, I filed all that off and did some inlays and engraving, so you have to look past that, but it is from an original, and to my eye it is the nicest in shape and line I have seen. I did a couple of them years ago and don't remember where I got them. 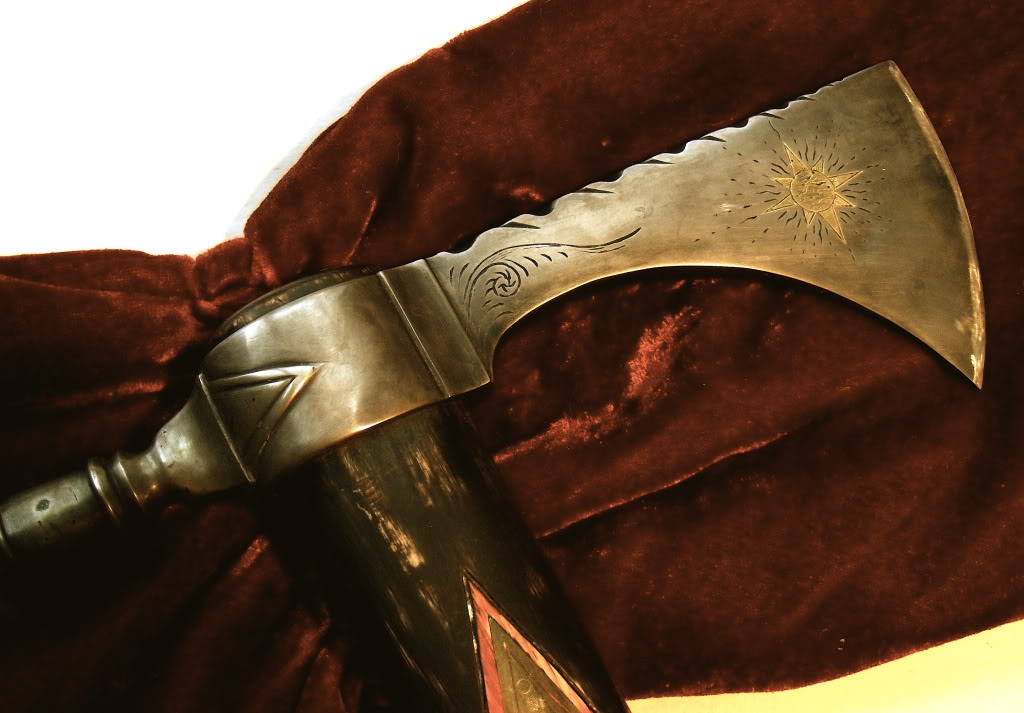 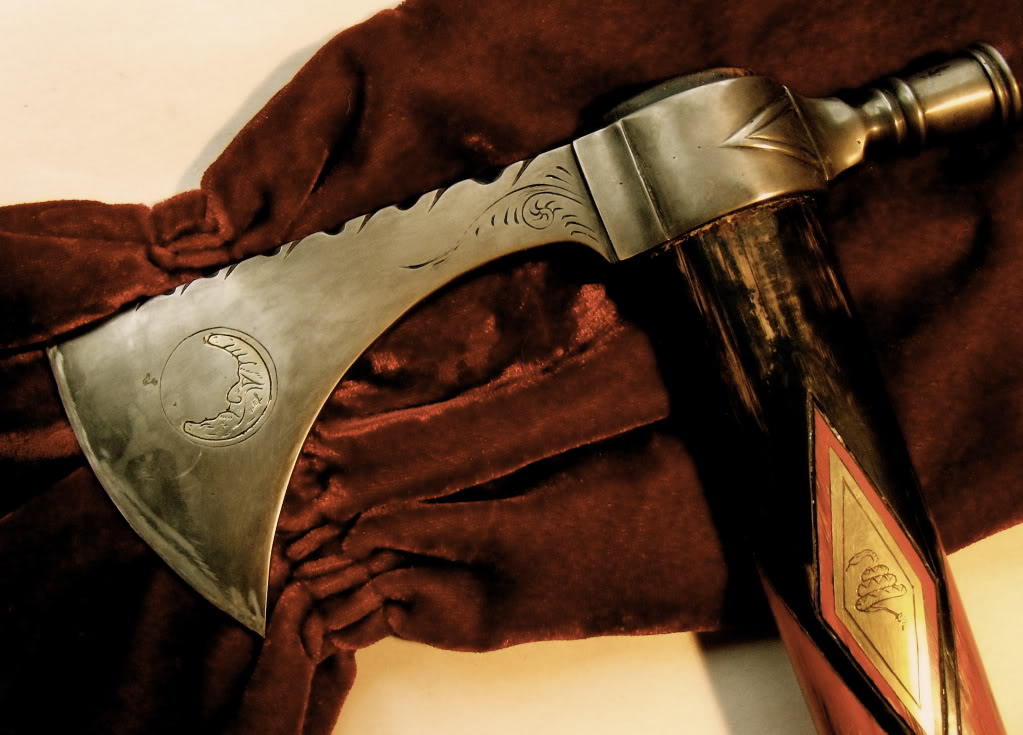 Robby said:
Stophel, The head below is cast from an original, complete with rust pits and even a few forge marks, I filed all that off and did some inlays and engraving, so you have to look past that, but it is from an original, and to my eye it is the nicest in shape and line I have seen. I did a couple of them years ago and don't remember where I got them.
View attachment 46998
View attachment 46999
Robby
Click to expand...

Sorry if this has been answered elsewhere, but to do those designs on the hawk, do you anneal it first, do the cuts, and then re-temper it? I want to do some work to my Cold Steel hawk, but trying to find out more information first.
Regards!

Pip, I did not anneal that head for engraving, it was very, very hard, so I put a hard temper on my graver and flattened out the angle of attack a bit. Even so, it took long time because I had to resharpen it so often. To do another, I would anneal it.
Robby
You must log in or register to reply here.
Share:
Facebook Twitter Reddit Pinterest Tumblr WhatsApp Email Link