What Would A Mountain Man Think About "Mountain Men"?

A Schilling ale from the townies in Littleton. You?
C

Sounds good, Today son and I shared a growler of Pigs ear ale in Woodstock NH as we were there for Bike week in Laconia NH. Raining as usual.
A

Ah, I'll meet ya at The Notch and we'll have a beer summit!

Ok so this thread is ancient I know. But the topic and responses intrigued me, especially as I just finished a drive from Texas to New Mexico to Colorado to Wyoming to Montana to Alberta to British Columbia to Yukon Territory to Alaska. I read this thread somewhere early in the trip and as I traveled through these states, provinces and territories it was on my mind. Especially as I saw fewer people and more wildlife.

With all confidence I can say that the closest thing today to yesterday's mountain man is the Alaskan Bush Pilot. Alaskan Bush Pilots certainly recognize that they have a very unique set of skills that no other pilots have. All the ones I know, myself included, do not glorify themselves- so no- I don't believe most mountain men would glorify themselves either. It's just something we do and they did, nothing more.

Beyond the above, and with all due respect, the OP Alden is completely wrong in everything he presupposes, a lot of which is covered in posts by others. I will focus on just one element, survival skills.

I spent the first 60 years of my life growing up, hunting and fishing in California, Florida, Idaho, Louisiana, Tennessee, Texas, and Kentucky. The remainder in Alaska flying, fishing and hunting.

During my lifetime there has never been anywhere in the Lower 48 (or Hawaii) that requires anything even closely related to the survival skills needed by the mountain men. Everywhere in the Lwr 48 someone else has been first. Lots of someone else's. And some form of civilization is always close at hand, even in the Bob.

Alaska is the closest representation we have of the skills that were required and unique to the mountain men. I'm not talking about the Alaska most folks come to visit, which is generally on or near the road system (which represents just a teeny fraction of Alaska), but instead the rest of the state where I can land and be the very first human to ever set foot in that area- at least since the continents separated. That is both a very humbling experience and a very sobering one.

To help put it in perspective, if I'm flying in the Lwr 48 and manage to get my plane stuck on an island (done that) it's only a cell phone call and friends mobilizing to come get me unstuck, which all takes place on the same day. Contrast that with Alaska where every time I take off I have to be prepared to spend a week in the wilds before being rescued- and I've got a Sat phone to let my friends/rescue personnel know I need assistance and tell them where I am.

In Alaska it's true we have no wild Indians trying to take ones scalp, nor any poisonous snakes, nor mountain lions. But we do have more bears than people. Brown bears that may maul you, and black bears that may hunt and eat you. And they are everywhere, even in downtown Anchorage- the city where half of all Alaskans live. We also have lots of wolves, as well as some of the harshest weather (in the winter especially which last 6-8 months). Screw up or get injured and you have a very serious problem.

Oh and in parts of Alaska a compass needle points down, and in the summer the sun circles overhead, never setting making navigating by compass or position of the sun difficult to impossible.

What does all this mean? Nothing earth shattering other than I wish some of you would come up here so we could experience the closest thing to what the mountain men did. What a blast we'd have.

Below are a couple of images you might find interesting. And thanks for letting me babble.

This first is the road system in Alaska, compare that to the state you live in. 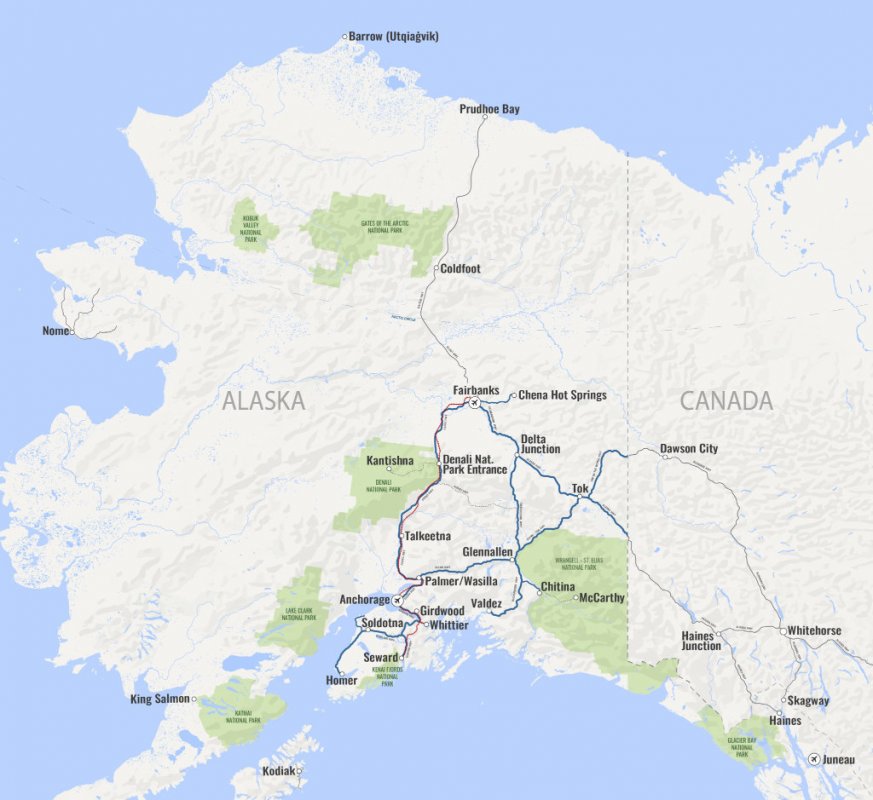 This second is Alaska compared to the fur trade area. 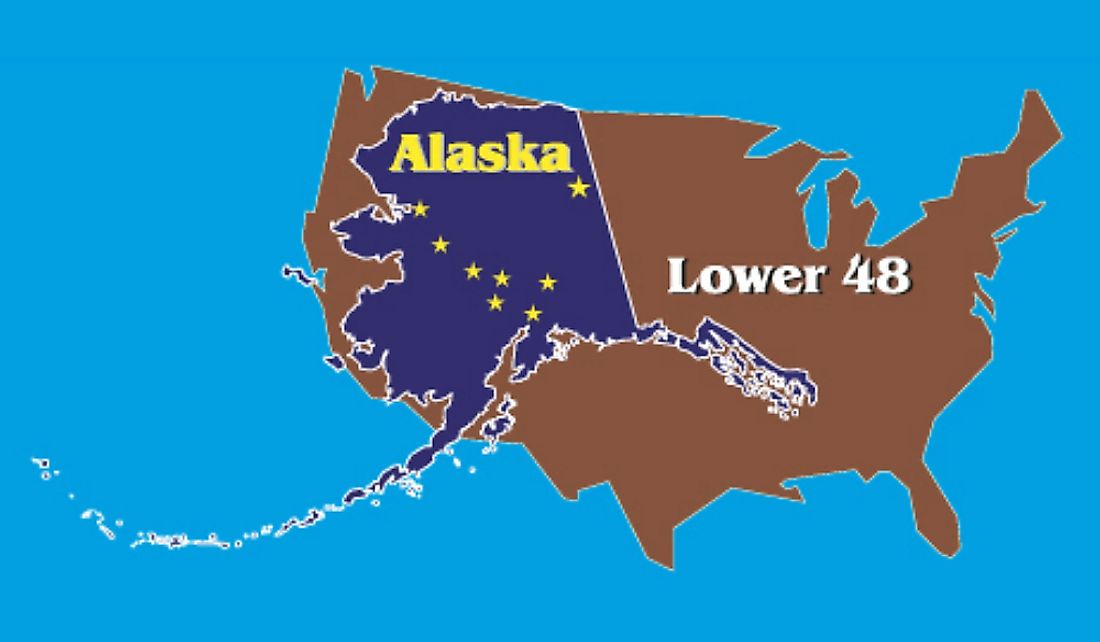 I'd have to count them up but there is probably about 20 diaries written by mountain men. Most seemed to go to the mountains for the pure adventure of it. BUT, those were the ones that wrote the books so it might be wrong to assume all the mountain men were of that type. Most of them belonged to a company of trappers so none of those trappers probably thought they would become independently wealthy. They most likely felt it would be a very high paying job- maybe similar to those who went to Alaska in the late 1970's to work on the pipeline.
S

They would look at todays so called mountain man and think " you wussys".

They wouldn’t think about us at all.

Claude Mathis said:
Mountainmen wouldn't be very good at using today's computers, but hell, most of my clients and customers can barely use one. :rotf:
Click to expand...

Alden said:
Thanks for the invitation but would the movie you watch on your iPhone camping a mile from your pickup truck with your polymer handgun at arms length resonate with me because...

...as you've pointed out, that says a lot about a person.

OK, we vote you burgeoning trekker hard guy of the month. And now I need to go burst, drain, irrigate, and band-aid a big Macblister on my shin.
Click to expand...

I could not come close to matching a mountain man. However at fifteen years of age I solo travelled in the mountains around St. Vrain canyon in Colorado. Usually I hiked and camped a day's trek, stayed another day and walked out. Sometimes I fished and sometimes I shot game with a little single shot .22 rifle. I could only be gone three days because of school, work and a worried mother. No IPhone, no pickup [got to my starting place on a bicycle] no polymer gun or any other polymer. My second son was often gone into Idaho back country for a week at a time, alone. He continued that into his middle years much to the consternation of his wife. Not all of us are spoiled by modern innovation. However now that I am old I like being spoiled. I still don't have a smart phone, an Ipad or any thing of that sort. I do have a computer but don't use it well.. No reason to write this except for a bit of contrast. Dale [Polecat]

Mountain men were loners, in the main, who made a living best they could.
Some were guides, some hunters, some trappers--whatever the wilderness
offered. Of course, danger and adventure figured into it-as did possible
lucky circumstances and discovery. What is inspiring is the bravery and
self-sufficiency on the land. Imagine no water spigot, no refrigerator,
no bathrooms--for years maybe. Hostile native tribes , who, for good reason
hated you and your kind. This thread is a small tribute in remembrance of
the men of the Frontier who faced terrifying danger and became legends.

a day in the life of a free trapper would put most of us in terminal distress.
get up before light and eat something, maybe hot but most likely not. Just something to work on for most of the day.
check the skins you fleshed the day before and stretched on the rack over the smoldering fire. the day before was good and the skinning and cleaning had kept you awake past midnight.
head out to check your trap line just as the light is showing over the mountains.
after slogging through mud bog created by ancient beaver dams on the stream you are setting, you find your first set tripped but empty except for a ragged leg. wolf tracks show who the thief was. now you need to really watch your backside.
next set is also sprung and robbed. as you follow the stream your legs are starting to cramp from the cold of the water and the strain of climbing in and out of the water.
finally, you get a full trap full. you get the 25 lb beaver out and toss it over your shoulder, continue on, stumbling in the sinks of the bog.
By the time you cover your line of sets, it is starting to get dark. carrying 4 beaver across your back you get back to your camp, and skin the beaver. then grab something to eat and get back to fleshing the hides before you stretch them on hoops, stoke up a fire to smoke them.
fall between your robes after midnight again.
and dream of Rendezvous .
You must log in or register to reply here.
Share:
Facebook Twitter Reddit Pinterest Tumblr WhatsApp Email Link