Lyman Plains Rifle (like Investarm Hawken). I got it used from a friend who had let me borrow it to hunt deer. Two barrels, .58 rifle and .62 smoothbore. Still have it

My first ever muzzleloader was an original 1861 Eli Whitney contract musket, 58 caliber. In 1968, while walking home from 8th grade one day, I stopped in the local sporting goods store to buy fish hooks. At that time it was the first floor of a downtown house and the owner lived on the second floor. There were 3 old guns in the gun rack, the 1861 Whitney, an 1863 Springfield and an 1873 Trapdoor rifle. I told my father that night at supper and afterwards we went down to see them. My Dad knew the owner and bought all three for $200 on lay a way. Once paid off, we began casting Minie balls and shooting them. Dad took the Springfield and I got the Whitney. During the 1970s, when CT had it's first muzzleloader season, I took a deer with the Whitney. Had to be a patched round ball back then. My Dad and I shot both for years until his death in 1989. Probably being sad, I sold the Civil War guns to a collector friend with the condition that I had first refusal if he went to sell them. In November of 2020, I was able to get the Whitney back ! I plan to take it hunting again to the spot in the forest where I killed that deer over 50 years ago.
R

Oldtimerbow said:
Ordered a Thompson Center Renegade left hand .54 cal kit in the early 90s and put it together. Still have it today and still hunt with it occasionally.
Click to expand...

I bought and built the same kit in 1991. Have hunted with it ever since. It has put many deer and several elk in the freezer (and a half dozen grouse in the fry pan)
P

Investarms Hawken, sold as a Charles Daly, I bought as a teen-ager in the late 70's. Lived in Wisconsin then, and for deer hunting was limited to shotgun with slugs or a muzzleloader. Decided I would rather have one accurate shot with a rifle, than a tube full of slugs. Never have regretted that choice. Learned a lot with that rifle, for example shooting conicals with heavy loads just plain sucks, it hurt me more than whatever I was shooting at! PRB's in the right place kill a whole lot better, than massive foot/lbs. of energy that I'm scared to touch off. Still have the rifle, and it still shoots very well, though my eyes don't anymore. It is a .54 caliber.

Rock Home Isle said:
I'm curious to know what was your first BlackPowder firearm? Was it a rifle or a smoothbore?

What made you want to buy it?

How experienced/knowledgeable with this sport/hobby were you, when you bought your first BlackPowder gun?
Click to expand...

I
My first was a CS Richmond. I got started doing Civil War Re-enactments as research for a novel I was writing.

.54 T/C Renegade, percussion, prior to the QLA (fiasco). VA. just started a muzzleloader season, that was the motivation. Killed my first ML deer with that rifle, still have it!
B

Mine was, and still is, an 1851 .36 Navy. Back in the seventies, I was a teen living on my own in FL. Had a "barely get by" paying job with a septic tank company. I used to supplement my bologna diet with some fresh armadillo meat. Good eating. Gotta take care in the cleaning though.
I

My father bought me a brand new Belgian percussion 69 cal. smooth bore trade musket when I was 15 years old that was back in 1966 .Still have still use it for hunting and shooting still in great shape .Shot or ball dose it all very well
S

My first was a Kentucky Pistol kit that I got from a catalog showroom store (they were popular in the 70's). I was 18 or 19 and couldn't buy a modern firearm yet. I think it was Best Products. It is still in the family - gave it to my son.

I copied this from a post I made on another thread...not about my first muzzleloader, but the first that had meaning:

A .50 calibre CVA Mountain Rifle...that was my first muzzleloader of note.

When I was 12 years old, I spotted this wonderful shiny beautiful brand new muzzleloader hanging on a rack behind the counter of a local pawnshop. The gun captivated my imagination; it's lines, architecture, the history that it represented. At that moment, I started saving my money, and 6 months later I into that pawnshop to buy that gun and it was gone. In its place was a rough looking CVA Mountain Rifle for $85.00. Someone had built the gun from a kit, and I suspect that they didn't know what they were doing. I had peddled my bicycle 7 miles into town to buy a gun and I wasn't going to peddle home empty handed. I bought that gun with all the money that I had saved. Tied the heavy rifle across the handle bars of my bicycle with a jump rope, then peddled 7 miles back home.

Using what I could find in books from our school library, I taught myself how to load it and clean it and care for it. Later I would meet Fred Newcomb (?), undeafeated Colorado State Muzzleloading Champion, who would open doors to rooms of knowledge concerning shooting blackpowder.

When I bought that CVA, my parents had just gotten divorced; both of them had pretty much checked out. Us kids, my brother and sisters, we took care of ourselves...that gun put a lot of food on our table. Rabbits were a common table fair, as were squirrels. Doves didn't fair to well with the big .50 no matter how small a charge I loaded it (I must say that I have a great (Almost Awesome) recipe for Rabbit Stew).

At 80 yards I could put 5 shots into a single ragged hole with that gun, from off hand; it has never failed me in the field. I've replaced many of the parts over the years as they became worn or broke, but it never failed me when I needed it while hunting. I discovered that when I ran out of .50 calibre RBs, I could patch .45's with denim and keep on hunting; until I could afford to peddle to the store and buy more of both.

The Mountain Rifle took a goose at one point; I watched it land at the far end of a huge field. I was out huntingand was able to crawl down the corn rows for several hundred yards and close the distance.

As I grew older, Colorado offered a BlackPowder Season. I've taken countless deer with my CVA and sooo many elk.

That ole rifle is still one of my most prized possessions...it has really weathered well over the long decades. My Mountain Rifle taught me a lot about hunting and stalking, due to the limitations of the technology. And it provided for my family at a time in my life when things were really tough and lonely.

These days that ole .50 sits in my gun room, leaned in the corner. Its not as shiny and pretty as it once was, the barrel is well past its prime, the rifling is faint, but present. From time to time, I still enjoy hefting it and feeling it’s weight as I hold it to my shoulder and looking down the sites.

My current interests involve Rock Locks; these firearms really intrigue me. I have taken lots of game with various smoke poles and modern arms, but none is as special as that first gun of note.

A .50 cal T/C New Englander that I inherited from my Dad's hunting buddy when he passed. Never did kill a deer with that gun but snapped a lot of caps on them

A .45 cal flintlock pistol kit that I bought from Dixie Gun Works in 1971. I've still got it and shoot it occasionally. Bill
R

TC Hawken .50 circa 1978. Its long gone but others have taken its place over years.
T

My first seems pretty rough looking now but I was thrilled when my parents bought it for me. I think I was 12-14 yrs old.
I haven’t pulled it out in 30 years.
It appears to be marked Made in Spain. PIC Kentucky rifle. Cal 9 ?? Maybe 9 mm. I still can’t see well after eye surgery. It’s a smooth bore. I still have a partial box of caps from DGW that I got with it. This is the one that got me started. 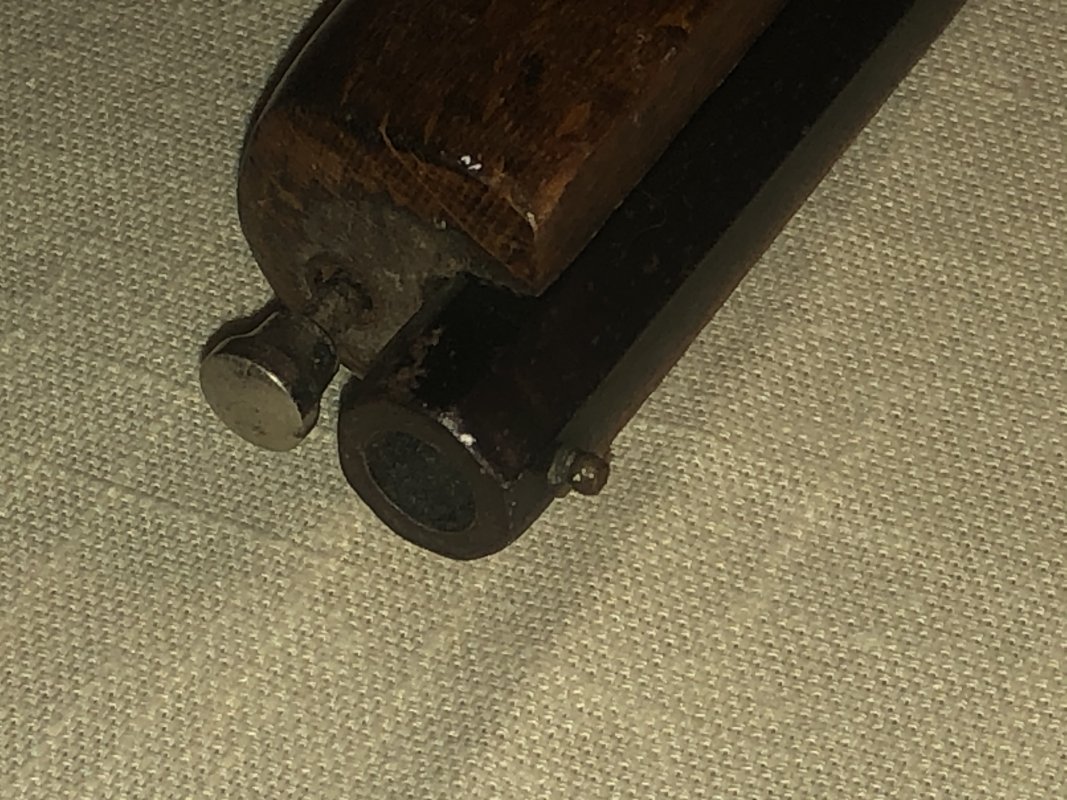 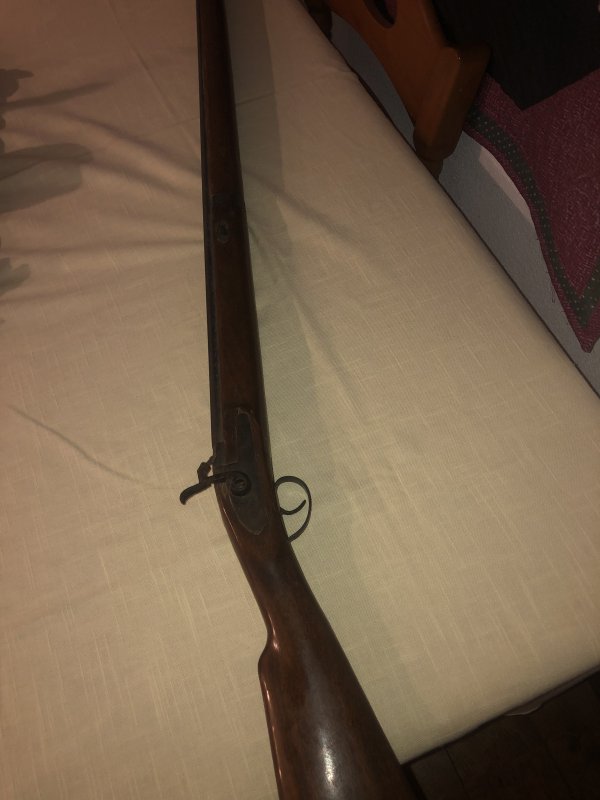 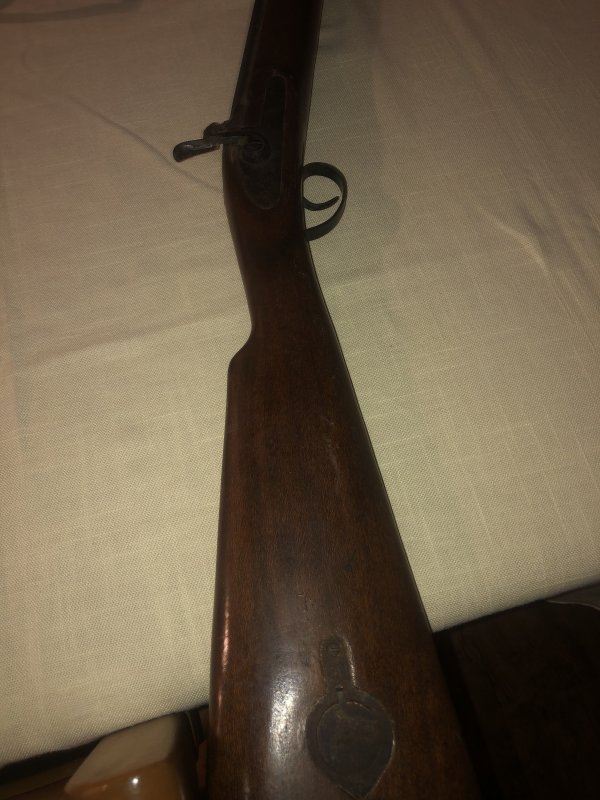 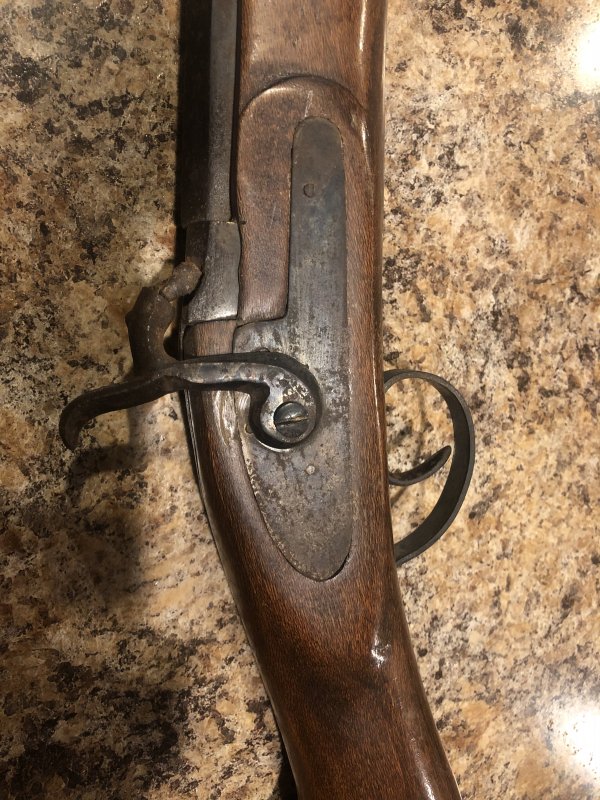 In 1974 I bought a Guns and Ammo Complete Guide to Blackpowder book and fell for BP guns. Growing up with Dave Crocket and Daniel Boone on tv I always loved those Kentucky rifles the used.
I ordered a Numrich Arms Minuteman rife kit from Dixie Gun Works and built it in my Houston apartment. It was a percussion but I later ordered a flintlock from Dixie so I could switch back and forth between the two. I shot may pounds of power in that old gun and she hangs over my fireplace today. Moved on to other better guns through the years but that old Minuteman is still very special.
DJ
Love Life, Bowhunt with a longbow, shoot Blackpowder, and play a Martin Guitar .
B

I’d always been intrigued by them but really all I knew about them was the boom stuff got stuffed in the front.

Second was a GPR kit I got at a sporting goods store closing for I think $125. The kit really hooked me.

Back in 1970 a friend and gunsmith was hunting deer with an old original muzzleloader and having very good success at downing some good buck. I learned all I could about muzzleloading and the information was hard to come by. In 1972 CVA, which I think was a fairly new ML Company, was making a full stock two piece Kentucky kits. I purchased one, completed it that year, shot a buck, and moved on. I have been assembling or making muzzleloaders for 49 years now and have never purchased a completed primitive muzzleloader. I sold that gun, and then went on to make and sell five TC Hawken kits. Out of all those kits I only had one that was a tack driver. Wish I had that one gun back. Then Green River Rifle Works started making and selling barrels so I started buying the wood blanks, cast parts and GRRW barrels, then H&H Barrels, GM, Rice, Sharon, etc (there is a lot of barrel companies that have gone out of business. I never did it to make money and I have never quit learning. Been fun!
A little off the subject but I think the Big Game Board in our State is finally realizing the deer and elk muzzleloader hunt needs revamping to exclude the modern ML guns and scopes. If your State is one of those who needs a re-do, get a hold of your legislative powers or your Wildlife Board. The traditional muzzleloader enthusiasts are so independent that they can't seem to get organized enough to get what they want or need. Be nice, but don't be silent.
You must log in or register to reply here.
Share:
Facebook Twitter Reddit Pinterest Tumblr WhatsApp Email Link