I was in 8th grade, shop class. Coach Willis after spending a semester teaching us not to cut our digits off asked the class one day, "who all wants to build a muzzleloading rifle in class?" I heard build, rifle, and in class and my hand shot up. Heck, they gonna buy me a rifle to put together I thought. Four others also wanted to try. "meet me after class" he said.

Bad news...they WEREN'T gonna give me a gun...I had to buy it. I asked my dad; after a month of saying no he brought home a CVA 45 cal Kentucky rifle kit. I proudly carried it on the bus to school (had to sit behind the driver). Spent a semester putting it together, with lots of help from Coach Willis. Finished it before end of school and took it home, on the bus, this time completed (again sat behind the driver).

I ordered a capper, powder horn and measurer from CVA. I knew NOTHING about black powder other than what the pamphlet said. It said 70 Gr FFFG was max, Dad said well try 60 and see what happens. Holy Cow I could hit stuff.

One Saturday we heard shooting a mile away down the creek. Dad strapped on his pistol, loaded his shotgun with slugs and went to investigate. He came flying back telling me to get my rifle and gear. We met some "country folk" who were shooting muzzleloaders. The ringleader told me to throw away the measurer and put the ball in my hand then pour powder over the ball. When I covered the ball I had a load for the rifle. I kept the measurer. Heck we were so far in the sticks we didn't even have a phone back then, no one knew what an internet was. Info was hard to come by.

I still have the rifle...while in college my younger brother shot my rifle and said he forgot to clean it. Its on my list to do something to it in my shop.

Since long gone and all mine are now customs. Don't care for the factory guns, no soul.
J

Being recently married with a baby, I couldn't afford anything more expensive.

After a few cylinders, I was hooked for life.
P

Lyman Great Plains Percussion Rifle in .54. Refinished it with dark stain and browned the barrel. Excellent rifle. Sold it and bought an Uberti Santa Fe Hawken in .54. Still have that rifle, and many more.

H&A underhammer rifle for me. Given to me by a girl I was dating. Interesting thing is she taught me how to shoot it.

I started with a used, CVA Mountain Rifle in .50 caliber. I had little to no experience with muzzleloading. I shot Pyrodex out of it, and being left handed I removed the cheek rest and refinished the stock. I learned a lot with that rifle. I traded it to a local gun shop for a new T/C left hand Renegade. I never could get it to shoot well no matter what I tried. That one is gone too. I went through a period in the mid-1980's when I used muzzleloaders for all of my hunting.

I always liked reading about the fur trade era and the mystique of the Hawken. Today I only shoot black powder with a Hawken type rifle in .54 caliber made by Brant Selb of Oregon. I also have a .58 on order from him. Also shoot BPCR.
T

CVA Mountain Rifle, 50cal. A kit gun, had it together in two day's, would have been ready in one but the finish wasn't set yet. On the third day my buddy and
I were going grouse hunting so I took it along. Found a target rolling around in his trunk so I took it down range 75 paces, loaded, touched it off. When the smoke cleared he went down to retrieve said target. It had the most beautiful hole, right in the middle of it's blue ribbon. I wish I still had that gun, probably a U.S.A. barrel. That was 43 years ago. I bought because every one I hung around with and hunted deer used 30cal except one, he had an older 45-70 and thought his was bigger and badder then everybody else's. Well he showed up with his and I took mine out and said, oh , you brought that little thing again. We all got a good laugh out of that, eventually he did too.

! The ad did say if you could find one with lower price the advertiser would honor that so I sent in my check and the old ad

! A short time later the rifle did show up (at my college address !) a .58 cal Zoli Zouave with a note saying they did "honor" my lower price even though they sort of fussed .
A

Rock Home Isle said:
I'm curious to know what was your first BlackPowder firearm? Was it a rifle or a smoothbore?

What made you want to buy it?

How experienced/knowledgeable with this sport/hobby were you, when you bought your first BlackPowder gun?
Click to expand...

Mine was an Armsport 45cal Kentucky kit Rifle that I bought in 1978 with Christmas bonus. It was $ 99.95 plus tax, lock was crap and after a couple of years completely fell apart. Bought it for PA muzzleloader season!

got my first in 1969, percussion and the stock was two piece. Shot it a little and than it became a wall hanger. I made the hangers and still have them, a 1816 muskets is i its place

My first in around 1974 was an H&R Huntsman in .45, very accurate but an early inline, nuff said.

I took a few 75 yards shots at deer with it, thinking it was like throwing a rock down range I held over and missed all of them. I blamed it on the gun, sold it and bought a TC Renegade, then a Hawken, then a Seneca, then another Hawken, then several more Renegades and Hawkens.

I didn't know squat about working up a load back then, if they didn't group well with my standard load I blamed it on the gun and traded it off for another one.

I swore off TC guns when I bought a new TC flintlock on line and found out when it arrived the lock inlet was filled with hot melt glue to make the lock plate fit, this was from the factory.

I swore I wouldn't own another TC until an older Hawken kit was found in my dad's house shortly before he went to assisted living. I put the kit together, it sure brought back memories. I actually really like the gun, I even bought a drop in .54 GM barrel for it out of nostalgia.
Last edited: Feb 25, 2021
S

It was 1976 and I was newly married and caught up in all the Bicentennial events; not sure which excited me more. Anyway, I purchased a CVA kit for their Kentucky flintlock. Put it together with some folk who knew about guns (I certainly didn't). Other than shooting it for the first time, my greatest memory of putting it together was heating the barrel to brown it. I worked at a summer camp then and we suspended the barrel across the camp's large BBQ pit to do the job. Even the camp director came out to see what was going on; and then made sure he was there to fire it off the first time as well (LOL).

That's all for now. Take care and until next time...be well.

started on a friends 50 hawkin. got my own for primitive season went to inline was in junk shop found 32 squirrel in a wooden barrel first build HOOKED.
M

A good friend & avid hunter invited me in 1983 to attend a monthly shooting competition organised by the Sawtooth Mountain Men (SMM) & held at the local public range. Black powder & good people must be VERY contagious because I was addicted from that day forward. My first muzzleloader, TC .50 cal caplock Hawken kit, was ordered for me by an SMM member, accompanied by basic accessories to adequately get started. Since then, I've added other kits to the "arsenal," & other organisations have entered & exited my life, but that TC .50 cal will always hold a revered place in my memories.

I still have it of course. It was last fired by my dad in 1989. We had a super time that afternoon! Dad has since passed on, so even though I favour other muzzleloaders for various reasons, the TC .50 cal will always hold a special prominence. 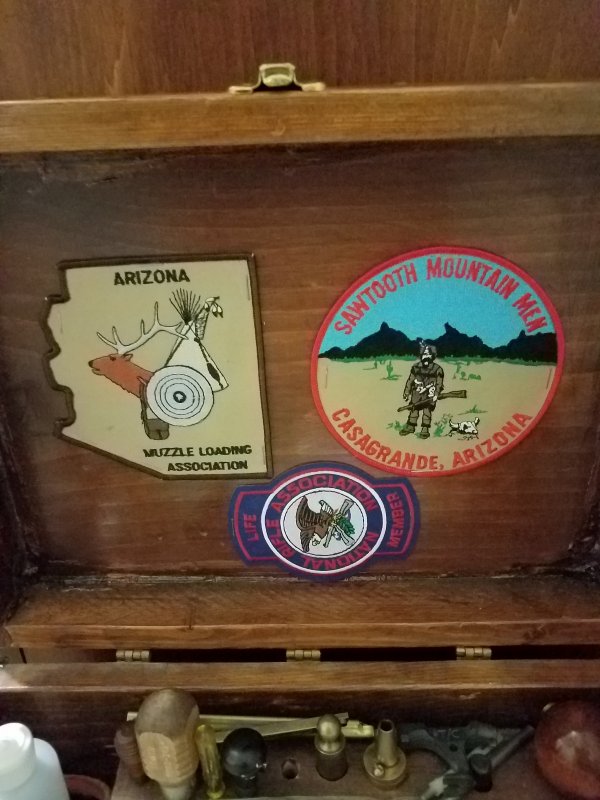 A .50 caliber CVA Blazer kit in 1986 like the one in the photo. I still have the rifle, never fired it and probably never will. I believe there was a recall for this rifle. And does anyone have a bad hands on experience with this rifle? 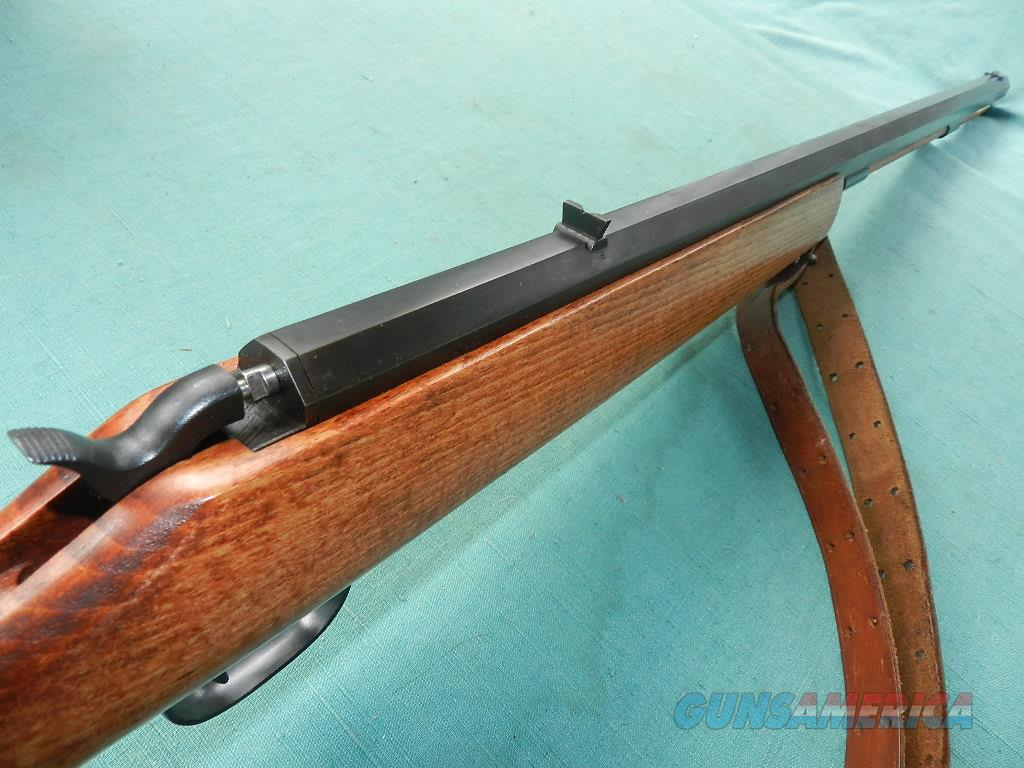 My first one was a Pedersoli Pennsylvania rifle. But, my wife and I went away for a weekend, and my son had a party and the rifle was stolen from the fireplace mantel... What prompted me to buy it? I'm from the Davy Crockett generation