Can anyone give me any information on this gun. My brother has had it for a while and recently passed it in to me. It’s in horrible shape. Should I leave it as a conversation piece or try to restore it or sell it to an enthusiast? 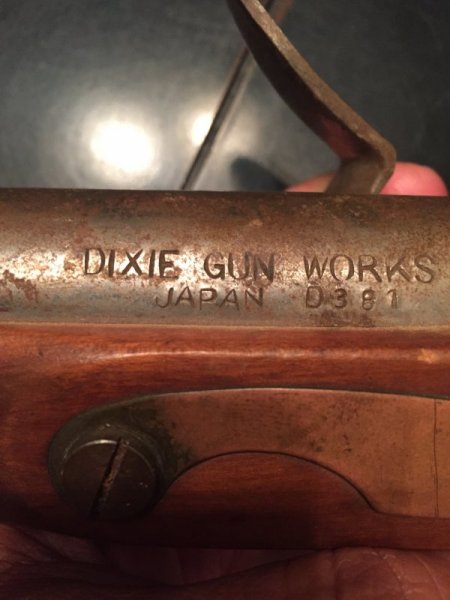 Type dixiegunworks.com in your search engine and go straight to the folks that sold it.
T

Looks like "Tower" Flintlock pistol, probably sixty something caliber smoothbore. Lock may or may not spark and function well, likely the latter. They were imported by many, including Turner Kirkland's Dixie Gun Works of Union City Tennessee (still in business)

Many others imported them, around the time of the bicentennial, from Japan as well, with minor variations. The lock springs may not have been tempered well and the frizzen not hardened very well and the general lock geometry can be off, but if you can get it to work by frigging with it, and hardening the frizzen, they can be fun to shoot and hell on garden pests with a load of shot.

Here is one Simpson's limited has for sale, in not that great a condition too:

Firearms for the Finest Collectors

I remember them selling for $30 new plus $5 to have the springs tempered and adjusted and the frizzen hardened. I have one that's been reworked so it will shoot. They aren't very valuable and are more a toy than serious firearm but could be fun if it were made reliable. They were available all through the '60s, possible earlier. Given the years they were sold and the price there should be one in the attic or basement of every house in the country.

It would be really helpful if a picture of the entire gun was shown.

Barring that, in a 1980 Dixie Gun Works Catalog they show a pistol that I think might be the gun in question. The cock (hammer) has the same hole thru it and the lock sideplate has the same curve at the forward lockbolt hole.

"DFP-39 BRASS MOUNTED FLINT TOWER PISTOL
Modern made and very attractive. Sometimes called a pirate pistol.
Rather nice quality. 9 1/2" steel barrel. No matter from whom you purchase these guns, the will not spark very good. No other
company will advertise that they do not work good. Just because they will not spark good, do not fail to send us a nice check for $42.50 for one of these guns. Bore size is a true .67-. Use a .650 mold. Shipping wt. 6 lbs. Have fun!."
D

Thanks so very much for all the responses!! Y’all are awesome!!
C

Assuming it is what Zonie and TNGhost indicated, I have one.

Picked it up cheap, no idea if it's been reworked as noted above, but it sparks well and is fun to shoot. The frizzen is a bit loose when it's open, but it's snug when closed.

I have 5 of them that I have bought over the last 40+ yrs at various gun shows be cause the were CHEAP ! never pain over $100.00 for any of them. all had weak springs and would not spark, hardened the Frizzen's with KASENITE and tempered the springs and they all are shooters. all are the same even the one that is marked KOREA, on barrel. the rest are marked JAPAN. I would bring them to the RONDEAVOUS that I would attend and leave them on my table for ambience. and if it got lifted no big loss! now when I wat to show any one how a FLONT LOCK operates I bring one of them out, and shoot a load of bird shot out of them with HORNETS NEST FOR WADDING, works great,
W

Be aware that at least some of these (including the one I own) has a breech plug that is simply tack welded in place (no threads). A proof test would be advised.

In regards to the above post - I do not believe the breech plug is tack welded; what you're seeing is how the tang is attached. I owned about six of these throughout the years, the first one was purchased from EMF back about 1970 or so. It cost 20.00 and that included shipping. Even back then that was not a lot of money. All of the ones that I owned had that welded feature. Since they did not come proofed I did my own test using Dixie's suggested method, which really isn't a proof. In later years, for the last couple, I used the same proofing but I had access through work to a welding shop where they magnafluxed (SP?) them after I set them off. All had soft frizzens which I hardened with kasenit. Some had weak springs. I found a work-around for that by making a CVA mainspring for a percussion rifle fit with a little cobbling. The prices that they bring at on-line auctions are really high; far higher than their quality merits in my opinion. People pay what they choose, I guess. They are great fun, however.

BEP you are correct, the weld is to attach the tang only. The myth of a welded in breech plug just will not go away. Had the plug have been welded in there would be evidence of that even if the area was finished after. Likewise these never had a pressed in breech plug. I have never heard of a single failure of the barrel on one of these guns though most have probably never been fired.

You can take all of the steel parts off of the pistol, and dunk them in a container of Evaporust overnight. Then rinse and clean and oil. The brass bits remove, and give a good polish with either Brasso liquid, or Duraglit.

Thanks, BEP and hawkeye2 -

It's good to hear that they are not known to come apart.

Now I'm wondering how that plug is actually fastened. I don't see any sign of threads on mine, but the sign may be hidden under the weld. Perhaps they skipped the procedure of making the 'head' of the plug seat at the same time the end seats inside the breech at the bottom of the threads by simply seating it inside and cutting off the outer end. That would mean the weld is just a guarantee that the plug won't unscrew, along with its main function, attaching the tang. A close look at the top flat shows weld on top too. If that's the way it was done, it seems a good way. Not a period correct procedure, but a sound one, the only fault being that the plug would be a 'bit' harder to remove.


Here's a photo showing the weld on top - different color in the blue. 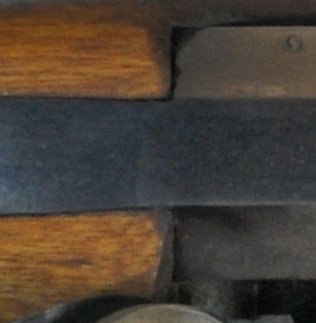 Since the gun has been blued the photo really makes the weld stand out. Thanks for posting it. I expect if anyone cold blued the back of the barrel it would really bring out the breech plug and I expect they were screwed in and cut off saving some inletting on the stock and probably having to drill the plug for the lock screw keeping the cost down.
S

Being a smoothbore I suspect the bore is just a blind hole drilled into the barrel stock with the tang welded on later . This saves the time and man hour to mill the tang from the full diameter. After all it was only $20 shipped

sportster73hp beat me to it.

Several of the muzzleloading pistols don't have a removable breech plug. They are made by drilling a flat bottomed hole into a bar of steel, leaving a solid wall at the breech. Even Pedersoli uses this method on their Queen Anne flintlock pistol so the method isn't confined to just the "cheap makers".
The Queen Anne pistol's barrel tang is machined or, "hogged out" of the barrel material which is fine but it is an expensive way to add a barrel tang. The simpler, less expensive way of just welding on a piece of steel to serve as a tang is fine. The weld in that area won't weaken the barrel and if it was welded right, it will be strong enough to do the job it needs to do.
W

Fun stuff. That pistol was my first flintlock, a gift from my wife. It was shortly followed by others (over 100 now) and has been at the bottom of a pile in a safe for years. Now I've dug it out. I case hardened the frizzen when I got it, but the springs were OK. The only real problem with it is that at half-cock there is no room for a flint with the frizzen closed. Maybe I'll fix that.

Came across an interesting photo related to this thread. It's a photo of one of these pistols being fired around 1970 or so. My older brother is/was an amateur photographer. He had a camera that he could hold the shutter open manually. We picked a pitch black night, aligned everything, he held the shutter open and the flash and explosion provided the illumination. Purely old school and low tech but it worked.

The shooter was Ora Laisure, from Grant, Mich. Ora is long gone now but he was an avid shooter and more than happy to be a part of this. You may notice that his eyes are closed. He always claimed to be praying that the pistol would go off. Could be. 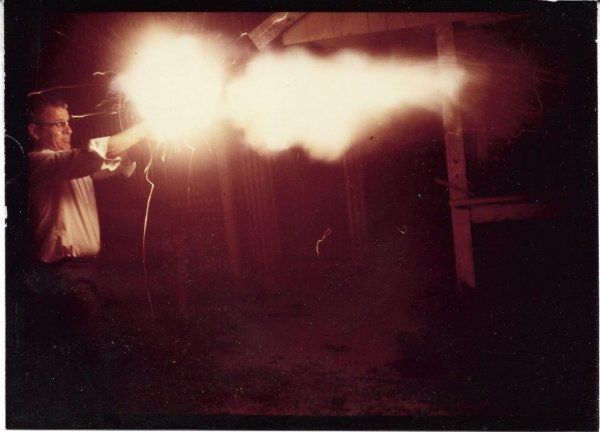