Were knee britches the only pants worn on the frontier?

Thinking of kilts as HC, I wonder how many "retired" in country from the Highland regiments and settled in Canada and the colonies?
S

Hatchet-Jack. Thanks for the explanation of gaiters vs leggings. I understand now.

starman said:
What is the difference difference between gaiters and leggings and what is a good height on the leg?
Click to expand...

I'm not sure about this business of leggings attaching to the breeches with,,, anything.
Leggings so I've seen are generally hide or wool, with many period writings advocating wool. As said, they are sewn up the front or side for a very close fit. Often ending above the knee about the width of one's hand. Many times secured with a woven garter around each leg just above the knee or a string run up to something around the waist,, the latter seems most common when worn with a breechclout.

Gators are military. Heavy canvas. Usually either black or white. Button up the side and have a strap under the foot to hold down the part covering the top of the foot.

I'm realizing now that I don't have a good pic of my leggings.

starman said:
What is the difference difference between gaiters and leggings and what is a good height on the leg?
Click to expand...

My uniform is correct for the 1758 uniform for a British Grenadier Private.

@Hatchet-Jack is generally correct. You can see my gaiters in my avatar. They are heavy canvas and come up over my knee. They button up the side to keep the gaiters tight to my leg. I have a button hole that fastens to a button on my breeches. With the garter and the button, the gaiters stay up. Gaiters are most often found in the military. Leggings are civilian attire and would come up to just above the knee. There would be a strap from the legging that tied to the belt.

Great thread. Buttons on civilian leggings...was this mearly a fashion statement if it could be afforded?

I assume from posts that buttons are not needed for wool.
C

In the 1800's knee britches were worn by most men that go just below the knee, and ALLWAYS wore knee socks with them. 1800's men believed you were naked if you walked around with your knees exposed while wearing britches.

brazosland said:
Great thread. Buttons on civilian leggings...was this mearly a fashion statement if it could be afforded?

I assume from posts that buttons are not needed for wool.
Click to expand...

Not sure what the difference is between a gator and a spatterdash, but in my head they are more similar than gators and Indian leggings.

Trapper1993 said:
I've seen reenactors wearing full length britches, knee britches as well as breechcloths but most of the paintings and drawings i've seen feature men wearing knee britches. Which of these is more historically accurate? You would think frontiersman would wear full length britches and gaiters if they could afford them because of cold temperatures and brush.
Click to expand...

Breeches were commonly worn by all types of men in the 18th Century in either deerskin, wool, or linen. They were loose in the butt, but tight in the legs and came to just below the knee cap in the front and to the bend of the knee in the back; like old style football pants. They were worn with over the knee stockings of wool, linen, or silk.
Trousers could be short or long i.e. below the calf or at the ankle and were also worn by all sorts of men from sailors to soldiers to frontiersmen. They are made of linen or wool. They could be worn over stockings or socks.
Gaiters are made of heavy wool or linen with buttons up the side to just over the knee. Usually worn by soldiers or farmers with breeches.
Leggings are of wool or deerskin sewn up the side or front, formed tightly to the leg. They can reach to above the knee or even to mid calf. A thong or strap was usually tied to a waist belt. Garters were tied below the knee and sometimes about the ankle. Worn with breeches or breech cloth.
Spatterdashers were like gaiters, but only came up to the bottom of the calf. These were worn later in the 18th Century by both military and civilians.
There was also a "country legging" (can't remember the exact name) that were pieces of cloth, linen or wool, wrapped around the lower legs and tied above the ankle and below the knee for protection, and/or warmth by civilians.
F

Thank you, Oreclan, for that clear explanation.
, I'm still unclear on the differences between trousers and military overalls. Grenadier 1758, I think it's more than simply civilian and military; could you comment. Thanks.

Flinty Scot said:
Thank you, Oreclan, for that clear explanation.
, I'm still unclear on the differences between trousers and military overalls. Grenadier 1758, I think it's more than simply civilian and military; could you comment. Thanks.
Click to expand...

Overalls are sometimes called "gaitered trousers" nowadays. They are baggy behind, and tight in the thighs and legs, have three to four buttons at the ankle, a gusset that covers the shoe buckle, and a strap which passes under the shoe.

Trousers have stovepipe cut legs. that is they are straight cut.
F

Thank you Cruzatte. That's just the information I needed.

I see there is no mention of Botas?
And all materials mentioned leave out hemp cloth?

Mad L said:
I see there is no mention of Botas?
And all materials mentioned leave out hemp cloth?
Click to expand...

My understanding is that botas reflect California/New Mexico influences. As to hemp fabric, I understand that it was mostly used to clothe slaves, or the very poor. Later on, (1795-1815 era) the US army used Russia Sheeting, a hemp fabric for fatigue uniform items such as trousers, and fatigue jackets.

Mad L said:
I see there is no mention of Botas?
And all materials mentioned leave out hemp cloth?
Click to expand...

The references to Hemp production and its uses in my books say it was sold to the British for Ship rigging and what was left over was exported in its raw state or cordage. It was very labor intensive to produce and process it so most likely it wasn't a popular choice to make thread. Flax on the other hand was commonly used for linen thread.
B

In March 1737, notary Charles René Gaudron de Chèvremont made the post-mortem inventory of Joseph Desjourdy de Cabanac, a lieutenant in the Cies. Franches de la Marine. What is interesting in this document is that notary describes his usual wardrobe including his military dress, etc... in his bedroom. He then goes to a smaller room, where Desjourdy seems to have stored his campaign or travelling kit, which contain: One pair of leggings (mitasses) One pair of moccasins (souliers sauvages) A piece of blue cloth (probably a breechclout) An old pair of mittens
One pair of socks (chaussons, probably blanket socks to wear in the moccasins) One tumpline of hemp. A tall Thiollières gun with its silver thumb piece "porte pouce" and its old gun case. One cavalry pistol (pistollet d'arçon) and one pocket pistol. A hunting powder horn full of powder. A powder-flask.
Two bags in which there is two pounds of shot.
Source: FrontierFolk.net - Colonial Nouvelle France/New France - Campaign kit of a French officer, 1737, Posted by Francis Back 2-18-11
S

I want gaiters made from alligator skin……”gators” heh, heh….
L

Trapper1993 said:
I've seen reenactors wearing full length britches, knee britches as well as breechcloths but most of the paintings and drawings i've seen feature men wearing knee britches. Which of these is more historically accurate? You would think frontiersman would wear full length britches and gaiters if they could afford them because of cold temperatures and brush.
Click to expand...

So "trousers" were not as popular in the first half of the 18th century as the second half, and they were much more popular in the 19th century.
NOBODY mentioned sailor's slops, which was another covering for the lower portion of a man, and although they were normally used to protect the knee breeches just as a smock covered and protected the shirt & waistcoat of fellows in other occupations...., in hot weather, the slops could be worn alone.

I mention sailors as trousers tended to be seen at first, most often on sailors and thus in coastal towns. Which didn't mean that sailors couldn't go up a river a good long way or even afoot into the wilderness.

Then you also have coveralls aka "gaitered trousers" for the military during and after the AWI.

The problem with artwork, alas, is that sometimes it's not done by an eye witness, and sometimes it's "ordered" and the client dictated to the artist what was wanted in the images..., so you don't always get good images of what was commonly seen. You will even find "portraits" of famous people in armor. Below is General Sir Jeffery Amherst, in 1763... I seriously doubt during his campaign in the F&I that he wore full plate armor, with a helm. 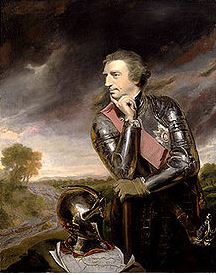 IF you wear fall front or button fly trousers that are of the correct style at least..., you are unlikely to get a bunch of negative comments. UNLESS you're in a British Army unit and it's Sunday and you're on Church Parade, as the Serjeant Major likes the lads in "proper attire" when speaking to God. Otherwise, you'll be fine. 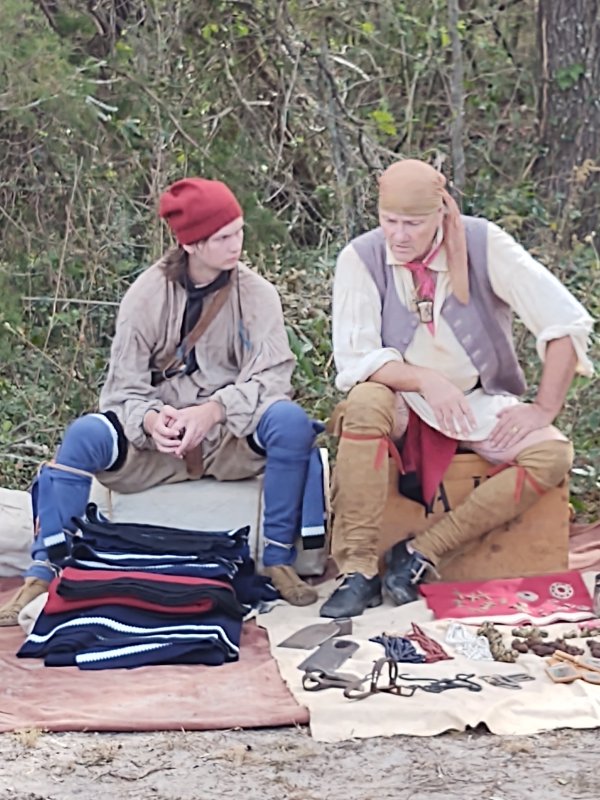 I thought I had an image of my leggings laid out flat on the floor..... I will look some more. This is a picture of my son & a buddy at a film shoot we did this past Fall. Both are wearing leggings or "Indian leggings"...... My buddies are made of buckskin.....my son's are made from a type trade cloth unique to the French.
T

The style of leggings I make for my self & my son are based on the Caldwell leggings and the Yuchi Indians shown in the Von Reck paintings. They are fitted tight and tight around the ankle by using a buckskin thing. The Caldwell leggings used hooks & eyes to make them tight in the ankle area while wearing but could be undone to take them off

We can not forget the importance of style. People had dress, as dressed by others in their economic class.
Sailor had a dress, so did farmers and teamsters. Don’t try to dress in their clothes unless you were part of that group.
A young man going out with some deer hunters would be dressed as a farmer. As he got experience with his group he would dress like them.
We have one drawing of Jed Smith. He is dressed like a middle class gentleman. It may not have been what he wore on the trail.
You must log in or register to reply here.
Share:
Facebook Twitter Reddit Pinterest Tumblr WhatsApp Email Link