I don't see much interest in either Walker or Dragoon revolvers on this forum so I thought I might give it a bit of a kick start just to see what others have here. Remember, I am a noob in this place, so flame on!

Many years ago I had the pleasure of shooting my BIL's Walker, one cylinder's worth. I don't recall the powder or the charge, but it made a huge KABOOM! My BIL has never been one to do things in a small way, so I guess it must have been loaded heavily to impress me. I was not into BP revolvers at the time, but I was awed at how heavy and large it was. A two-handed operation for me! I did have a question about why the load lever thingie dropped after every shot, and just said it was the way they were.

Fast forward to present day. I have always been impressed with the Walker's style, not so much with the 4lb 9oz weight. I started looking at the Old Model Army Dragoon .44 revolvers, with their 4lb 2oz weight but was not jazzed until I saw the Uberti Whitneyville Hartford Model. It has the frame and grip style of the Walker with the weight of a Dragoon. I was not impressed with what dealers were asking for it, so I started bugging MidwayUSA about their $425 price, and immediately afterward they dropped the price to $360. I was sold!

I like it immensely, but there is a problem with historicity, somewhat. Original Colt WH Dragoons on the Walker frame had blind screw holes for the trigger/bolt screws like this early Uberti offering: The ones that Uberti sells these days have the trigger/bolt screw drilled through, which I have. Maybe a cost saving measure, I dunno. It makes a big KABOOM with 40 gr BP, but due to the original style of the load lever latch, the load lever still drops from time to time, but seldom. Although not historic, it would be better served with the 1851 Navy type latch.

Show us your Walkers and Dragoons!

Some put the different latch on them. The originals had same issue and they would put a leather strap around it.
Some now use a contraption. 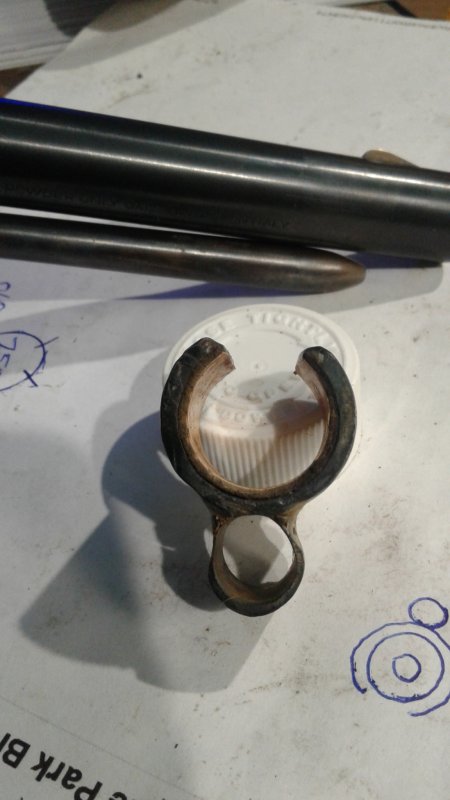 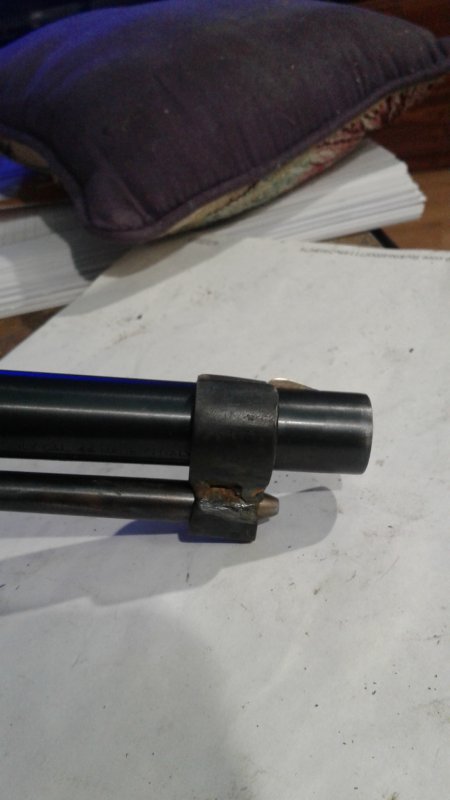 I had an 1858 NMA repro. Did the same thing. I think the loading lever catch and / or spring, were worn. It would come unlatched, upon firing.
S

It's my second one, I had a 3rd Model that I sold a decade ago as well as a Uberti Walker I bought back in 2002 and sold off a few years later.

Even though I have a Uberti '51 Navy which I love , I love the big Colts which is why my interest was rekindled and I decided to get another Dragoon.

I'll probably get another Walker at some point , it's inevitable.

I may even get another 1st Model Dragoon to have the correct "Brace " if I catch the fever again from this one.

I have 300 .454 200 grain conicals to experiment with, some 260 grainers on the way and I'm going to get an Eras Gone Dragoon bullet mold. I figured round balls are easy enough to get if the conicals don't pan out. I have a Walker powder flask but will roll non-combustible period correct cartridges once I get a load and bullet down.

I have no real interest in the Remingtons right now, nothing wrong with them but I've loved the open top Colts since I was a kid. I just love the look and feel of them.

Some of the avid Walker shooters file a flat spot in the retaining spring to solve the dropping issue , and for the Dragoons, some guys simply make the ledge of the retaining notch deeper and/or put a stronger spring in the lever for the latch.

Can't wait to beat the last of this cold I have so I can start working up loads .

Curious: does your 1st Model have the V-type mainspring like the WH or the "flat" mainspring?

Initially I wanted a 2nd Model Dragoon (I love the square back trigger guard) but ended up trading for a ROA. Now I’d rather have the Walker as it has a huge historical significance and is what brought Colt back into business. And more is better in America!
S

Curious: does your 1st Model have the V-type mainspring like the WH or the "flat" mainspring?

Probably a flat mainspring since it shares the frame of the 2nd-3rd Model.
Last edited: Feb 5, 2020

Here is a photo comparison between the Walker and an 1851 Navy. 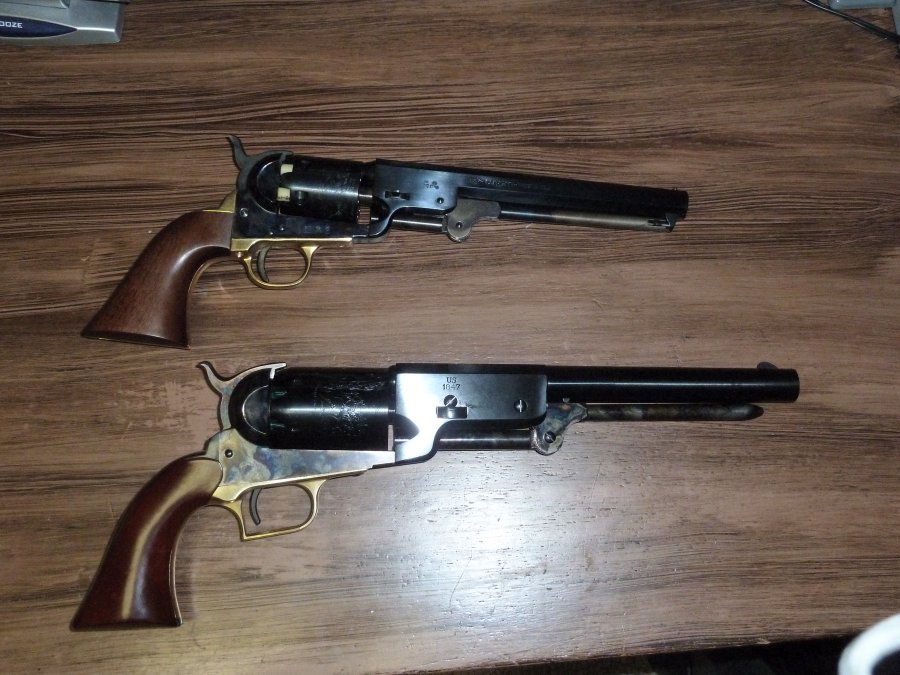 Stantheman86 said:
I'll see if I can get the back strap off and look

Probably a flat mainspring since it shares the frame of the 2nd-3rd Model.
Click to expand...

You don't have to do that... if there is a ~3/16" steel pin showing midway on the frontstrap of the TG it is a V-spring.

I'll look when I get home
S

Also the "Dragoon Bullet" fits the Uberti Dragoon but the Walker needs alteration?

I was talking to Mark from Eras Gone about using lube in the Dragoon bullet and they were originally lubed but later versions had a lube groove. I would think a light layer of some kind of Bore Butter type thing would work just to keep chamber fouling soft.

However with real Black you'll likely need to clean after a few cylinders anyway so I'd probably just run them dry or dab a smudge of period correct lard over the bullet (not done to stop chain fires but to keep the bore fouling soft) as was reportedly done in the Walker over the Picket bullet, when loaded from the Walker flask of also debated reliability. (I have a Pedersoli flask repro)

sourdough said:
I don't see much interest in either Walker or Dragoon revolvers on this forum so I thought I might give it a bit of a kick start just to see what others have here...

I like it immensely, but there is a problem with historicity, somewhat. Original Colt WH Dragoons on the Walker frame had blind screw holes for the trigger/bolt screws like this early Uberti offering...

Looking at the pictures of the Whitneyville Hartford Dragoon in my 9th Ed. of "FLAYDERMAN'S GUIDE TO ANTIQUE AMERICAN FIREARMS", it shows both the blind hole style and the thru hole style frames. (p 84).

The text says,
"...Among other distinctive details to note are the very slender, or "Slim Jim" appearance of the grips, and the short trigger and cylinder stop screws of the early frames (thus not passing completely through)."

Another thing that is interesting about the later frame in the picture shown is, the grips meet the frame in the square corner style that looks like the later Dragoon models rather than in the rounded shape on the Walkers.

rodwha said:
Initially I wanted a 2nd Model Dragoon (I love the square back trigger guard) but ended up trading for a ROA. Now I’d rather have the Walker as it has a huge historical significance and is what brought Colt back into business. And more is better in America!
Click to expand...

Every Texas national and Texas expatriate should own a Walker just because. As the Mexicans say, !Porque Si!
S

The Walker is just one of those guns that anyone with any interest in the "Wild West", early American military history , or revolvers, needs to own.

My Dragoon is super cool but it still feels about 5% less cool than a Walker.

So few originals were made though that the Dragoon is more correct for anyone looking for "early Frontier/Civil War/early Indian War" history.
K

I speculate one of the reasons we see fewer of the Walkers and Dragoons is just the cost. Most of the other Colt reproduction and the Remington repros are more commonly available and often $100 and more cheaper. The others also show up in the second hand market more often. I have half a dozen of the others, but no Dragoon or Walker. I've aquired mine cheap at pawn shops, garage sales, etc. I'd pick up a Walker or Dragoon if I found one, but don't want to spend the coin for a new one.

I’ve been kicking the walker/dragoon idea around. I’d really like to put my hands on a couple before dropping the coin.

I'll say one good thing about the weight of the Walker and the Dragoon's.

The Walker and my 3rd Model Dragoon were the only revolvers he didn't try to steal. He left them hanging on the wall and I'm sure it was because of their size and weight.

Andrew Bradley said:
I’ve been kicking the walker/dragoon idea around. I’d really like to put my hands on a couple before dropping the coin.
Click to expand...

Midway has both Walkers and Dragoons on sale right now:

Even my Uberti Dragoon ram rod would drop at least once per 6. I took out the latch spring and added a spacer under it that would provide the full tension of the spring and it fixed it.
You must log in or register to reply here.
Share:
Facebook Twitter Reddit Pinterest Tumblr WhatsApp Email Link