venison burgers with a twist

One of the first thing I learned about cooking venison when I started deer hunting was that it is a dry meat. According to the conventional wisdom, since it has no marbling, fat inside the muscles, it gets dry and tough when cooked unless you take special precautions, such as adding fat in some way. A good example of this is that if you have your deer processed and request ground venison the butcher will always add 20%-25% pork fat to the grind. Well, I have always processed my own deer, and I have never added fat to my burger. I don’t do fat. I do love deer burgers, and I have learned a secret about cooking them. It’s not the absence of fat which makes them tough and dry, its overcooking them. I have solved that in a way a bit different. I don’t fry them, I bake them.

I use a toaster oven and a 6” cast iron skillet. Put the skillet in the oven and heat it to 450°.
Generously salt the meat for one burger and knead it thoroughly to distribute. Shape it into a patty.
When the oven comes to temperature remove the pan, spray it lightly with non-stick spray, put the patty in, cover the pan with a piece of foil to contain any spatters and return to the oven. Time it exactly, remove it in 1 minute, flip it over and return to the oven. If the red on the top side was gone when you removed it, leave it in the oven for only 30 seconds. If not leave it for one minute. Remove it.
If you want cheese, put it on the burger immediately and the retained heat will soften/melt it.
Serve on a toasted bun with the spread of your choice. I like Miracle Whip with a little yellow mustard added. 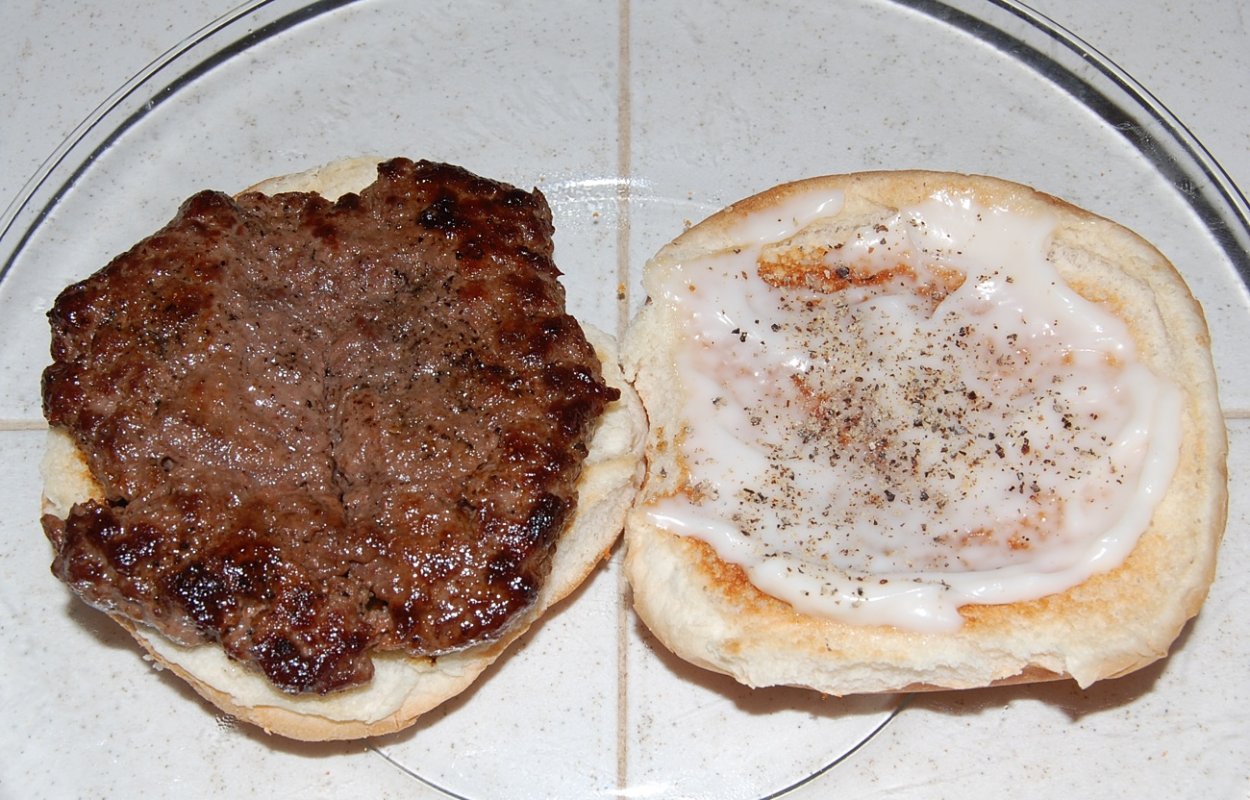 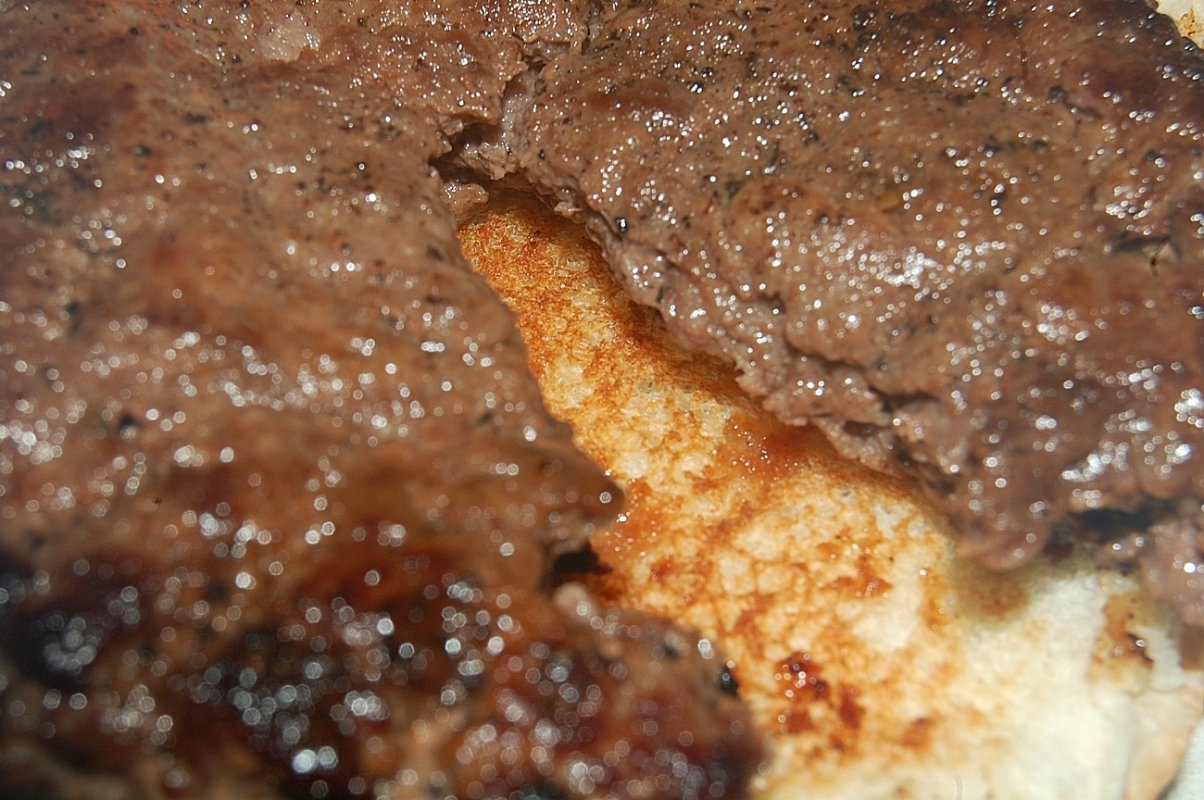 The are the most tasty, juicy and tender burgers anyone could ask for, and nearly zero fat.

I grind my burgers, measure them with a 1/3-cup measure and freeze them so I have them available in just a few minutes whenever I’m in the mood for one. 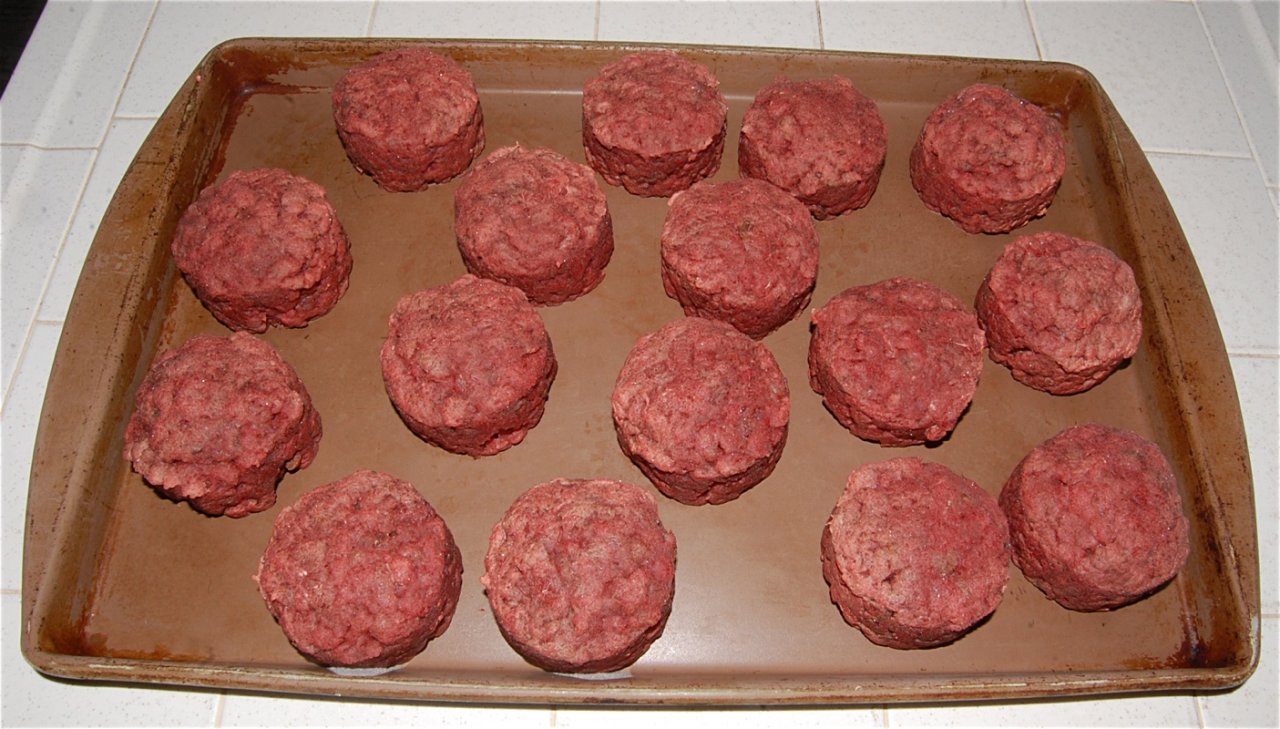 If overcooking venison isn’t a mortal sin it should be.
Spence
A

I am with you spence, if I wanted pork burgers I would buy un-cured sausage, just a bit of salt,pepper and a quick fry in cast iron skillet or a quick trip on the grill gets it done.

I never added fat to moose burger other than the fat that was on the moose. I didn't want any old hog lard or beef tallow in my meat. We always did our own grinding with a commercial size grinder so we knew what was in it. The way to a good patty is to do a fine grind on the burger. Coarse grinds fall apart too easy. I fried them in olive oil with a good shot of bacon grease in the cast iron skillet. Wish I had one right now!

Sounds good, most venison gets overcooked. We do ours with 20% bacon when I grind it. Might not be necesary, but bacon never hurt anybody.

Spence 10 ya got my mouth a waterin'. I'll bet they are even better than they look. 100% with you on venison being over cooked by most.

I sometimes like to mix a little pork sausage with the hamburger just to spice things up a little. Pretty tasty..... Most of the hamburger though ends up in Goulash or meatloaf though....

Most folks overcook venison, period. I use lemon pepper, garlic and seasoning salt on my venison, even the wife likes it.

In the past I had only used deer meat with no fat or suet in it. I finally tried it with 10% beef suet for a yr, it was good. It was fine with just med ground deer meat too. Absolutely right about NOT overcooking deer meat no matter what parts you're cooking. Even burgers. Last season I used 10% hickory smoked bacon ends/scrap chunks ground the same as the deer meat. Thats fantastic for burgers or meatloaf with just a lil S&P.

Spence10 said:
.......If overcooking venison isn’t a mortal sin it should be.
Spence
Click to expand...

I'm with ya.
Yea folks try to cook venison quick n hard like beef. It doesn't work
Slow and short cooking is better. To treat it like chicken or a heavy fish steak is best. It should never be well done.

I prefer mayonnaise with a dash of curry and a pinch of black pepper.
J

as with a lot of the cuts its how you cook them. me with burgers sear the outsides and cook them slow slow slow..i like to chop up some hot bananna pepers to mix in before cooking them

Just to add in. We soak our deer steaks in milk the night before. I swear it makes all the difference. That milk is full of blood, and thick as syrup when I wash them off before cooking. I even tested it on backstraps.... easily the best cut of venison. The entire family including a bossy 3 year old prefer the steaks soaked in milk.

And here I always thought Venison was for Tacos....
O

My favorite deer meat is ground with cheap 70% beef hamburger. It's found in super markets in the form of what's called tube meat because of the way the meat is packaged in a cellophane tube. We stay away from adding pork because pork fat can spoil in the freezer.
My all time favorite venison is meat loaf. Second is spaghetti sauce , 3rd is chili.
Another friend grinds bacon into the venison for hamburgers. That's his favorite way.
You must log in or register to reply here.
Share:
Facebook Twitter Reddit Pinterest Tumblr WhatsApp Email Link