Use of the hunting sword

The only time I ever killed anything with a blade, was as an MP Sgt at Marine Corps Base, Camp Lejeune, NC. It was about 1981, and I had a call from one of my junior MPs that there had been a traffic accident on Holcomb Blvd adjacent to Wallace Creek, involving a privately owned vehicle and a deer. The driver was a Major's wife and she was a basket case when she wasn't being a real PITA. Once I arrived on the scene, I determined the accident had broke the deer's back, and the doe was bellering and shaking, only moving her neck. The Major's wife kept crying, "Shoot her, put her out of her misery", I said, can't do it, not authorized, that would be an unauthorized use of force and that the base game warden was on his way. Well, she kept crying and wouldn't shut up, saying how she was going to report me to the Provost Marshal if I didn't do something for the deer. I always carried a Case Folding Hunter two blade knife in a mag pouch on my duty belt, so I walked over to the deer, put my foot on her head and cut her throat. What happened next surprised not only the Major's wife, but the other two MPs on the scene. The deer expired in about 10-15 seconds, but sprayed blood about 6 feet, including the hood and windshield of the Major's vehicle. The Major's wife was almost beyond control, wailing and screaming how hateful and cruel I was, and again was going to report me. When the base game warden arrived he didn't help matters much, she asked him "What would you have done? and he said, "I would have shot it." I thought I was doing the right thing for all involved, but she reported me anyway for cruelty.
S

Swords were carried about on the frontier. They were not all that uncommon and really not that expensive. The frontiersman came from countries were swords became a common item, some were more elaborate than others. Some were presented a sword when leaving the old country as a going away gift. Many swords had that semimetal value as well as a weapon.
Yes many swords were carried, short, long and some elaborate.

I have seen something identified as a Jaeger's (hunter's) dagger. It was longer than a usual sheath knife but shorter than Saber. A Roman Gladius would seem about right for hog hunting with stabbing, slashing and chopping potential. YIMV (Your Injuries May Vary)
S

Years ago was gifted a set of German hunting blades. Two in a belt sheath. One large and heavy as a cleaver. The other obviously a skinner/caper.
The first would have been no less effective than an axe or short sword at dispatching a boar. And is quite useful at jointing out large game carcasses.

That's way out of my comfort zone.
S

Gunny5821 said:
Any thoughts on the Cold Steel Hunting Sword? Midway has them for about $272 free shipping. I have several of Cold Steel's other swords, all with carbon steel blades. The swords that I've seen are pretty decent for the price. I included the below link because they have the best photos of the sword.
Cold Steel Hunting Sword
Click to expand...

I guess if you go hunting in period garb, etc it would be ok. Maybe 2-300 years ago nobility types would have something that spiffy in their gear. I look at it and think costume piece. Even if it is a good quality sword - costume piece. If it was in use 2 - 300 years ago? Likely the hired help used it to finish off/butcher large animals while the nobility drank a toast.

SOLANCO said:
I guess if you go hunting in period garb, etc it would be ok. Maybe 2-300 years ago nobility types would have something that spiffy in their gear. I look at it and think costume piece. Even if it is a good quality sword - costume piece. If it was in use 2 - 300 years ago? Likely the hired help used it to finish off/butcher large animals while the nobility drank a toast.
Click to expand...

They must have been pretty popular, militia regs in the 17th and 18th century right up to the revolution called for the carrying of sword or belt axe-hawk. Hunting swords were often used as a symbal of rank for sergeants and junior officers. A little shorter than regular swords used years before they seem to be a better choice for feild use.

I had a friend that lived in California that hunted hogs with a knife. He said he didn't like to shoot one while the dogs were still close to the hog...

Stony Broke said:
Never carried a sword, but always had a knife handy. This hog had been shot and started coming out of the shock and squirming around on the tailgate a lot, so I just gave him a taste of a Buck.... 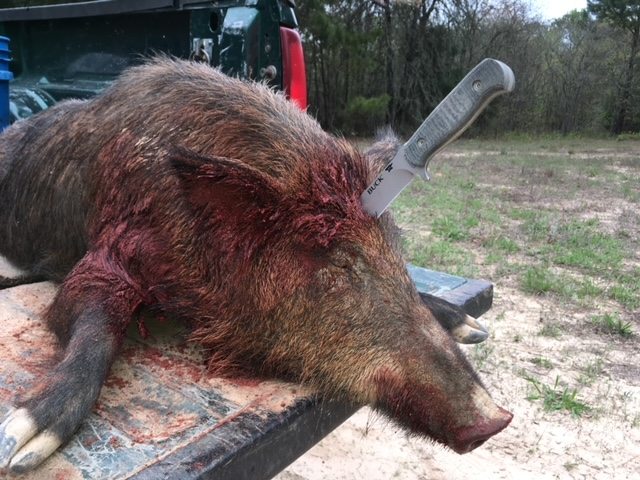 That reminds me of my family crest:

BillinOregon said:
I was admiring the very handsome Elijah Froedge hunting sword in the classifieds and got to wondering just how useful these might have been when they were popular, and what one might use one for today.
The aforementioned sword has a 17-inch blade and a stag handle, and comes with a baldric to drape the sword and scabbard over one's shoulder. These things have long fascinated me.
Click to expand...

They are cool! Also, I read they were for wild boars, should one attack the hunter. Very European!
S

Bighorserider said:
I know little about hunting swords or spears, but I used to know a guy who hunted boar with dogs and a knife. Is it possible the sword wasn't used after the animal had been shot but just after it was cornered by dogs?
Click to expand...

Then there was Davy Crockett, said in song to have "kilt him a Bar when he was only Three!"
S

Once met a guy from Kentucky (?I think?) who hunted hogs with a lance. He said you sometimes had to lift the butt up in the air after lancing your boar as it would try running at you.

If you know how to use them... (30 years of medieval full contact reenactment here)
Sword and Hawk are a Nasty and EXTREAMLY Intimidating combination...
(in Rev War history think...Peter Francisco)
and... they are quite... 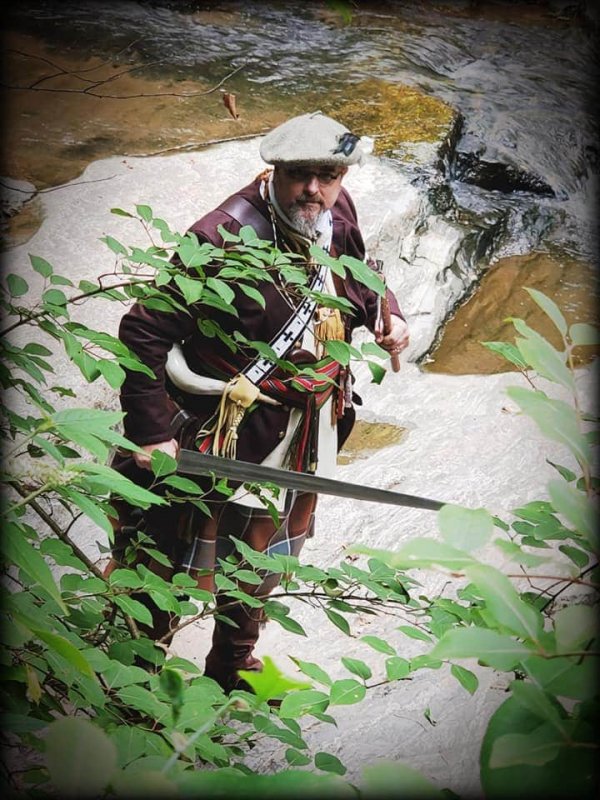 Looked at Pennsylvania deer hunting regulations which specify allowable types of firearms. And bows and arrows. There is no mention of allowable spears, swords or knives. Maybe go over this with your local warden before you try it.
Not to mention how you would get that close to deer. (Although my car was attacked by a rutting buck while I was driving one night in late November 2019. He was fighting with another buck when I drove up on them.)

SOLANCO said:
Once met a guy from Kentucky (?I think?) who hunted hogs with a lance. He said you sometimes had to lift the butt up in the air after lancing your boar as it would try running at you.
Click to expand...

European Boar spears have a crossbar about 18" from the point. Stops the Kentukian's problem.. OLD DOG..
R

I'm just working from memory but to the best that I can recall, the only reference I've read on hunting swords were from Mexican/Spanish settlers in the Southwest. Today they are used in France to hunt deer. The hunt is on horseback- like English Fox Hunting on horseback, and the hunt master has the sword. Then to the Chateau for a bite of quiche. .
On the hogs, stick 'em in the armpit to hit the heart, you need dogs, about an 8-9" blade is pretty common.

Flintlock said:
They must have been pretty popular, militia regs in the 17th and 18th century right up to the revolution called for the carrying of sword or belt axe-hawk. Hunting swords were often used as a symbal of rank for sergeants and junior officers. A little shorter than regular swords used years before they seem to be a better choice for feild use.
Click to expand...

This is the best reply so far. "Hunting sword" or "hunting hanger" can really be a misnomer as far as the usage in the colonies. "Short sword" or "hanger" are probably better for describing what we often call hunting swords. I tend to think that sword references on the frontier (Squire Boone, for example) were in reference to these relatively short bladed hangers. In warfare, hunting swords were worn by officers at sea and by infantry officers on campaign. George Washington's green-handled battle sword is a great example of a longer-bladed hunting sword. British colonels, for example, were responsible for outfitting their officers and typically purchased hunting swords (with hardware matching the uniform of the regiment) for campaign usage. Many examples of hunting/short balded swords survive from military contexts. They were, in my opinion, evolved from late medieval European hunting swords which were, in fact, used to dispatch wounded game. 18th century officers' use of these types of swords. If you look up colonial militia laws, most iterations include requirements for balded weapons, often mentioning swords in particular. Small swords (i.e. evolved fencing weapons with thin, straight blades) were useless for warfare, hence the use of hangers on campaign. So, most militia and later - regular military - in the American colonies who conformed to the militia laws from the early 17th century onward would have more than likely been carrying some version of short, hunting swords.

The sword from the classified section (I bought from Elijah a number of years ago) is essentially an American-made hunting sword. Most swords in the colonies would have been made in Europe and were of generally good quality. However, with the outbreak of war various steelworks and armories popped up in the colonies which produced more rudimentary arms. Also, conjecturally, any militia officer on the frontier may have purchased such a blade from a local blacksmith.
You must log in or register to reply here.
Share:
Facebook Twitter Reddit Pinterest Tumblr WhatsApp Email Link