C’mon guys!
We can get Skychief thru this...but it’s gonna’ take all of us working together.
We need stories and pictures!!!!
T

Darren,
Great storytelling and pictures! You sure seem to have Sweet Rachael dialed into “Turkey“.

Betsy was my fathers rifles name. He truly loved that old Winchester. My great nephew has her now and seems as fond of her as Dad was.

TGJaeger said:
Skychief,
Going into DT’s?
Just keep taking deep breaths and thinking about how much you’ll enjoy it when in a few more days, you will be out there chasing them on your own! You can do it!

Thanks TG. I'm doing so-so. Been spying on a gobbler that is down to one hen apparently, at least as I've watched him. Thinking that might help my impatience, it only served to excite me more for April 21st to arrive.....

Thanks for thinking of me, Skychief.

Skychief said:
Thanks TG. I'm doing so-so. Been spying on a gobbler that is down to one hen apparently, at least as I've watched him. Thinking that might help my impatience, it only served to excite me more for April 21st to arrive.....

Thanks for thinking of me, Skychief.
Click to expand...

Britsmoothy said:
Or are you using the twangy thing again?
Click to expand...

SC is using a banjo? Dude, that just ain’t right!

Britsmoothy, greetings friend! Plans now are to use something that will throw a Skychief Special load out of the end of it.

Don't know if it helps but I'll say this about that grand bird. I've called in a few birds to 20 yds or less - my turkey hunting experience isn't at all extensive - but gremlins DO exist. Something weird or "karma like" always happened to foil the shot.

The most fun I recall was trying to get this tom to commit and react to my decoys. I was calling when a rather distant tom started answering and began moving my way: hope springs eternal. As I continued to call periodically he moseyed closer and closer to where I waited loaded and ready. I was using my .40 flintlock (legal) this time and knew just where to hit him with it. Suddenly he sounded again maybe 30 to 40 yards away, still in the bush and still not visible. I gave the box call a light "tickle", just enough to get him in range of my setup. One more gobble then silence. I waited a good while and called again but he answered from much farther away; he had girlfriends already. I went back to calling and once again I finally managed to draw the lunk in close only to have him lose interest and go back to his hens. This happened three or four times before he finally left for good. No shot that day but what an adventure!

Here's the only turkey photo I have available to post, such as it is. 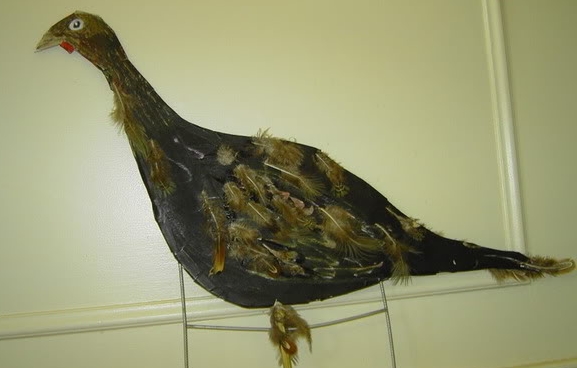 Here's a story of woe and misery for you that happened to me yesterday on our opening day of the season.

I live in what could best be described as a "rural subdivision". All the lots are 5+ acres and we are outside of any city limits so gunfire and hunting is perfectly legal and acceptable. My house sits on top of a ridge with most of my property being hardwood forest. There is a steep hill on the east side and I do most of my hunting at the bottom of it when I hunt at home. Lots of deer and turkeys pass through my place and once in a while it all comes together and I pack one of them up the hill for supper. Yesterday, that did not happen.

I got down to my spot a little before daylight and set up my decoys. I heard one bird gobble on the roost but he was so far away that I ignored him. I figured it was going to be a long morning so I was turkey texting with a friend of mine and calling every 20 minutes or so. At around 6:50, I yelped on a mouth call and thought I heard a gobble down in a hay field a few hundred yards away. I waited a few minutes and then called again. He answered and, I'll be dang, he had closed the distance considerably! He was coming in! I couldn't believe my good fortune since I had very low expectations for the hunt that morning.

Soon I could hear him spitting and drumming on my nextdoor neighbor's property. There is a gully between our properties which varies in depth between Grand Canyon and shallow ditch. I figured the tom would cross at the shallow end and come into my setup from that direction. I am looking that way, just waiting to see his blue head bobbing, when he lets off a gobble and the dude is exactly behind me! Between him and me is 20 yards, a 4-foot deep ravine and brush so thick that I cannot see him. I know there is no way he will cross there so I sit quietly with hopes that he'll figure it out and cross where he is supposed to.

After a while, I just can't stand it so I softly putt to him. He gobbles three or four times and makes so much racket that I now hear Laura, my nextdoor neighbor, come out on their porch to see what the commotion is about. I can hear her talking to someone, either their dog or her husband, and I know that no good can come from this. I am rewarded with a cluck as the bird turns around and heads back the way he came. That's the direction I need him to go anyway to cross the gully so all may not be lost. I yelp and cut to him and he gobbles on my property now. I check the powder in my pan, cock the hammer back on Sweet Rachael, and wait for his arrival.

Minutes go by with no longbeard in my sights. Directly, he gobbles again and he is now in front of me on my other neighbor's property. The bird has circled completely around me! We go back and forth, yelping and gobbling, but he is making no effort to come to me. I finally just shut up, hoping that the silence will get the best of him. Nope! He gobbles again and he is now heading away from me to a hay field in that direction. The last I hear from him, he is completely on the other side of that field, about a quarter mile away, doing whatever it is that turkeys do. I give him, and all his relatives, a thoroughly good cussing and go back to texting my friend about what had just transpired. So close....but yet so far away. My only consolation was that I had called a bird in from long distance. It just hadn't worked out the way I had hoped. I also was enjoying a great morning in the woods and not at work. It certainly could have been worse! 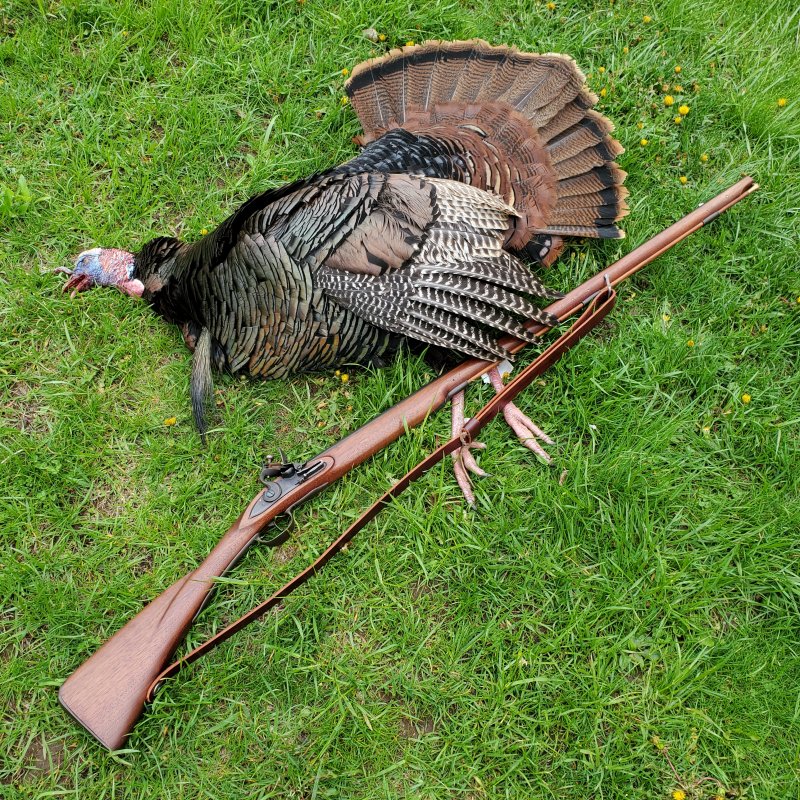 Thanks. I feel very fortunate.
F 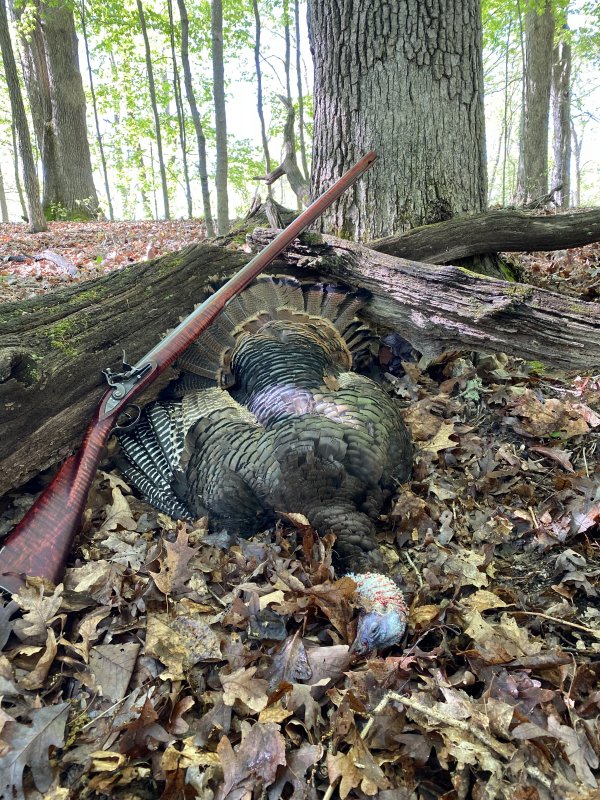 About the same load as above 80 grains FF and 1 1/2 # 5
Pedersoli 12 gauge with leather cheek pad as well as recoil pad. More so to project the stock when loading than for recoil purposes. 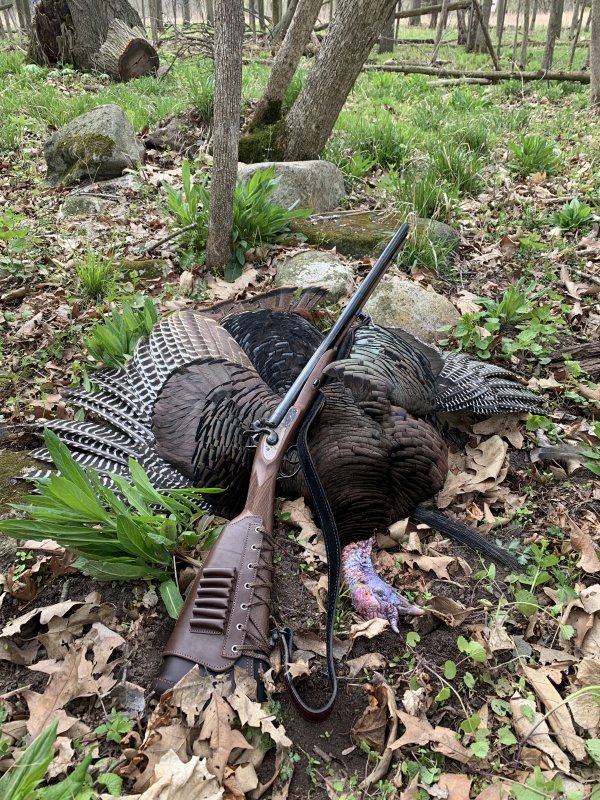