The War Between The States Discussions

It was a learned job. Powder monkey was an apprentice sailor. Running powder at ten, hauling line at fourteen, top man at sixteen, hand reef and steer at eighteen, strike for a mate at twenty.

I think the artillery units on dry ground had the equivalent of powder monkeys too. They were just called runners there , monkey was naval slang.
T

The only trouble Bell ran into in that regard was at sea. Lots of other options in port.

Eutycus said:
I think the artillery units on dry ground had the equivalent of powder monkeys too. They were just called runners there , monkey was naval slang.
Click to expand...

But a powder monkey learned a lifetime skill.. if he lived. An artillery runner didn’t have a skill he could sell when the war ended.

The painter Johnathan Eastman Johnson followed the army. He either saw or heard of a wounded drummer boy at Antietam ask a soldier to carry him so he could do his job. The painting is appropriately called the "Wounded Drummer Boy". 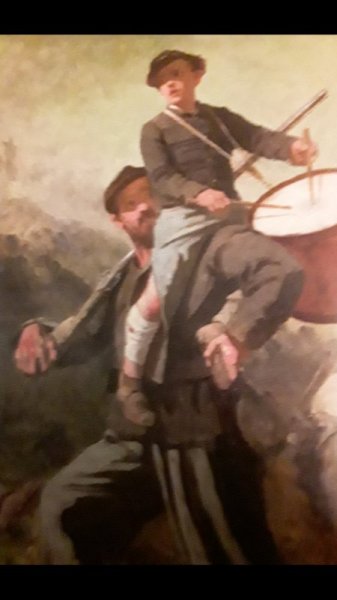 Another drummer boy that wasn't so lucky was W. Black who had his arm shattered from an exploding shell. 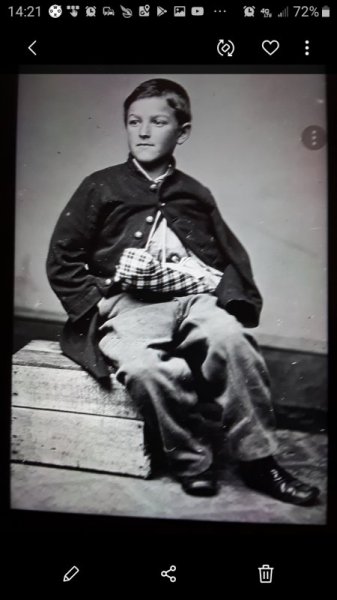 PluggedNickel said:
In fact, as you all well know. I have the hardest time keeping my comments in the periods of this forum. I have to delete posts that can’t keep on topic and in the past.
I find myself posting less on these topics because of it too. Although, I enjoy reading and learning from the true historians on this forum, who always warn they are posting their opinion, or understanding of the topic at hand. As with all things historical, there are opinions, and errors. And since we were not there to see with our own eyes, we tend to believe the version of events that suits our liking the best.
For sure there were people full of bs telling tall tales, and history often morphs into myth, and myth becomes truth. In regard to TWBS, I have found, most of what I learned in school books was the North’s sanitized version of it, over simplified, and often deliberately painting the Southerners to be the “bad guys.”
They say there are always two sides to every story. In reality, issues as complicated as the civil war, are never as simple to explain as just the North vs South versions. The truth is hard to find, and often times, what we believe about historical events as true, turns out to be totally false.
The older I get, the more I am finding out, many things I held as the gospel truth, are dead wrong.
That is never an easy pill to swallow.
Click to expand...

That is never an easy pill to swallow.

I am surprised, that borders on wisdom,
I only came across this post by chance,
I am also thinking of our (the German) history, there are similar things, and probably in all such cases the winners will write history books.

"There is Jackson standing like a stone wall!....Rally to the Virginians!" Historians agree that General Barnard Bee did utter those words at Bull Run /Manassas on July 21, 1861 and in doing so gave Thomas Jackson his immortal nickname. The name stuck and Professor Jackson became the famous "Stonewall" Jackson and the brigade he was leading became the "Stonewall Brigade" on that day.
What alot of historians disagree on was it meant as a compliment or insult?Most say that Bee was trying to rally this troops and pointed to Jackson + his troops stoically standing firm. But some think Bee said it in sarcasm , that Jackson was just standing there and not coming to His support.
Here lately there is a push to erase all things Confederate and for us rethink the Civil War. I for one believe Jackson was standing firm and it was meant as a compliment and these were words of admiration just like we were taught in school. Any thoughts, compliment or sarcasm? 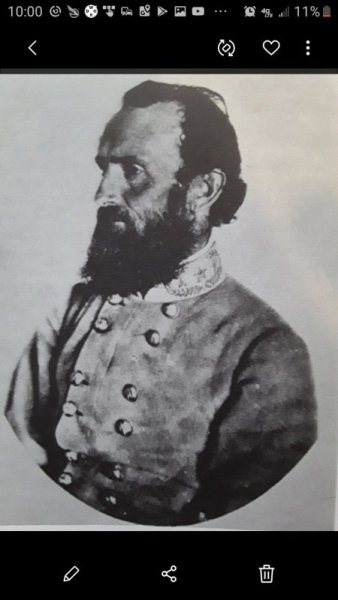 Eutycus said:
Here lately there is a push to erase all things Confederate and for us rethink the Civil War.
Click to expand...

Is that a positive or a negative ?
Is the justification rational or emotional ?
Is it beneficial ?
Is using the word "erase" hyperbolic ?

Rethinking past events is normal, it is how we learn. It is also how we get closure, otherwise it can drive you crazy living your entire life in a single moment, especially when it is one that you did not personally experience.

I did ask for opinions and I see that you replied with yours, however I don't see anything in your post that pertains to any men or events from July 21, 1861. Oh, and closure from what?

I did ask for opinions and I see that you replied with yours, however I don't see anything in your post that pertains to any men or events from July 21, 1861. Oh, and closure from what?

You brought it up. I think it worth exploring.


Eutycus said:
Oh, and closure from what?
Click to expand...

The war, loosing, being on the wrong side, or any other pertinent thing, take your pick.


Eutycus said:
Here lately there is a push to erase all things Confederate
Click to expand...

I don't think so, unless you are referring only to the negative aspects associated with them.

Eutycus said:
Another drummer boy that wasn't so lucky was W. Black who had his arm shattered from an exploding shell.View attachment 26778
Click to expand... 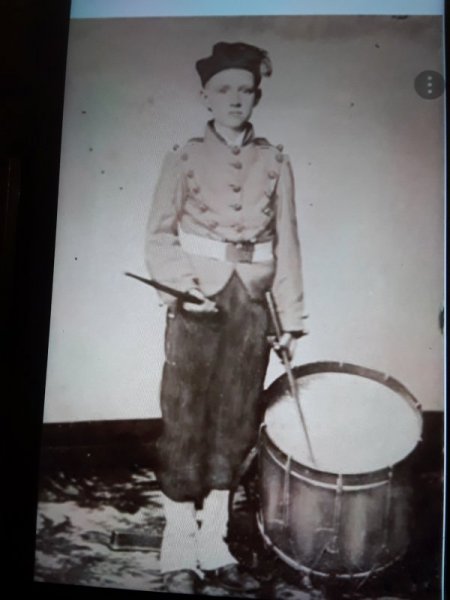 South had them too
Last edited: Tuesday at 9:53 PM

And this one is named Mosby.
T

Carbon 6 said:
When people today try to defend the reasons for southern secession, and characterize the civil war as "northern aggression", then there is a strong inference that they are trying to justify the south's desired attempt to perpetuate slavery into eternity.
The war to preserve the Union and all that followed to this day has been a struggle to tear down all of the vestiges of the slavery era.
For instance, It wasn't until 1967 that laws banning inter-racial marriage were struck down by the Supreme Court and it took even longer for public opinion to more universally reflect support for that decision. --->>> Interracial marriage in the United States - Wikipedia
Once the American social construct allowing slavery was destroyed, it has taken generations for a new social construct to be built and universally accepted that blacks are equal to whites.
Once secession started, there was no turning back the progress that was about to be made.
It was the war to end all wars over race based social and political inequality in the USA.
Historically speaking, when it comes to the Confederacy and the reasons for its defeat, there's nothing to defend except for a romantic notion of honor for which there is actually very little to speak of other than in the misguided hearts and minds of innocent men.
It's mostly sympathy for those who lost their lives supporting and believing in a cruel and evil social system of an ancient by-gone era that we as a nation inherited from the British that we simply needed to cast off and pay the price for.
What could have been a peaceful de-construction of slavery ended up turning into a horrific, bloody and costly war due to the conflicted belief systems of which one should be condemned while the other is promoted and which many need to be constantly reminded of.
There can only be one truthful history.
Prior to 1865 and the 13th Amendment, slavery was ingrained enough to be accepted as being for the social good of the nation.
After 1865 and the 13th Amendment, slavery has officially become morally evil and bad.
We as a nation simply righted the course of our ship of state and now there's no going back.
The course correction was made, the nation paid the price and was baptized by fire.
Slavery = bad, racial equality = good.
Confederacy = bad, Union = good.
The USA became whole, solid and united enough to go forth and continue to create a more perfect Union.
History wasn't written by the victors as much as it was chosen and accomplished by the victors, just like all of world history after the Declaration of Independence.
America had a task to fulfill, the mission was accomplished and all that follows becomes history.
Click to expand...

The simple fact remains that the South's only intention was to separate and go their own way allowing the North to do so as well.

The North however was dead set upon not allowing the South to self determine, and was intent upon forcing their will and way of life upon the South, predominately aimed at continuing their economic "slavery" of the southern states.

This posture is largely the reason the South did not triumph. They were fighting a defensive action from day one, while the North was on the offense to impose their will. Hence, "War of Northern Aggression".

I just finished a book about Raphael Semmes and the CSS Alabama. If Lincoln and Navy secretary Welles had not been so preoccupied with the blockade and building up the Union navy, they could have caught up with him sooner. By the time the Alabama and Kearsage squared off, Semmes' dairy reads that not only was the Alabama worn out but so was Semmes. According to his lieutenant Sinclair, Semmes was aware that the Kearsage had strung "chainmail" in the interior of the ship. That prevented shells from doing extensive interior damage. Sinclair further stated that Semmes could have done the same with the Alabama but declined. I'm not saying he had a death wish but the Alabama was in desperate need of a dry dock total refit. Both ships were nearly equal in armament but the Kearsage was faster. In the end Semmes was determined to have a glorious victory or a glorious death. It was nearly a glorious victory but for a faulty shell that would have destroyed the Kearsage's stern. Instead it was a glorious death witnessed by thousands. But I suspect he thought this would be the Alabama's last fight.

That non-exploding shell in the stern post of the Kearsarge was one of the many "what ifs" of the Civil War.

Actually I'm writing this down before I forget it. The motto of the Alabama was "Aide Toi, Et Dieu T'Aidera". Meaning Help yourself and the Lord will you as well.
C

Just another way of saying, "you're on your own"
T

The South sought to go their own way, whatever their reasons.

The North launched a crusade against them to impose their will, whatever their reasons and rationalizations.