While doing some reading, I came across an interesting topic: riflemen in the 30 years war. Unfortunately, there is less information than I would like.

Imperial Armies of the Thirty Years War(1): Infantry and Artillery, by Vladimir Brnardic, has the most in depth descriptions. The book claims "the musketeers also included calivermen or marksmen (Rohr und Shutzen, or Jager)" (pg. 11) and "The Calivermen were recruited from local defense militias, and marksmen from hunters and foresters; armed with calivers and wheellock carbines or rifled muskets, they either fought with the musketeers or as independent units" (pg. 12). Regarding tactics: "The Calivermen and marksmen (Jagers) were mobile and precise, and thus would be deployed as skirmishers away from the main formations" (pg. 18). Some of the only information on equipment: "Marksmen (Shutzen or Jager) and guard troops (Leibgarde) were armed with expensive wheellock muskets, carbines, and rifles; their high cost was due not only to the elaborate firing mechanism, but also to the quality of the bore and decoration.

Mockup of a rifleman from the book: 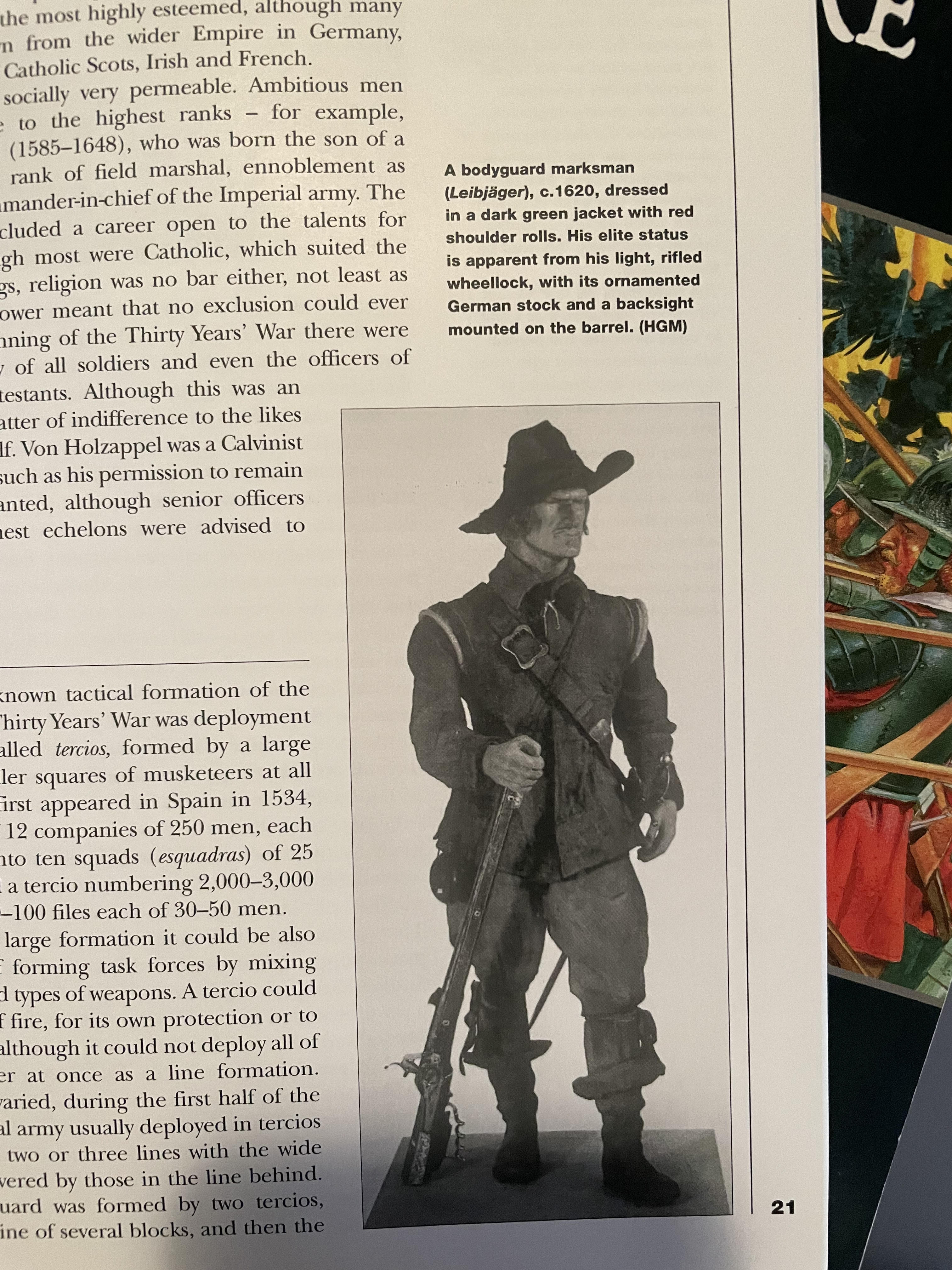 Wheellock rifle from before the war:

The book The Bavarian Army During the Thirty Years War 1618-1648: Backbone of the catholic league, by Laurence Spring, has some minor additional information. On page 52, the book lists the Munich guard having 103 riflemen. It goes on to state that later that year, the riflemen of the Bavarian militia were sent to Munich to form a Jager regiment.

It is interesting to see some parallels with the mythologized riflemen of the American Revolution. They were also local specialists that were called up to fight in the militia.

If anyone has any additional information, please share. I have not been able to find much else. Particularly information on equipment would be appreciated. The wheellock was the predominant self igniting arm in the German lands, so would it be safe to assume all rifles were wheellocks? Uniforms for musketeers are already extremely varied and information is not great on that, so I do not know how much will be out there on an even more specialized soldier. As mentioned above, anyone owning a rifle was probably well off, so it is safe to assume any sword they carried would be of high quality, opposed to musketeers. Finally, once again because they were personal hunting/sporting weapons, I am assuming the riflemen would have brought their own hunting flask and pouch for loading.
T

I found one other reference.

There is an illustration of a wheellock armed huntsmen (marksmen?) in European Weapons and Warfare, 1618-1648, by Eduard Wagner. Modern illustrations do not mean a lot as a source. This book is also a tad strange because it is a reprinting of an older book, has great information, but is full of typos. When you are writing about the 30 years war, calling Austria "Australia" is a little unforgivable... 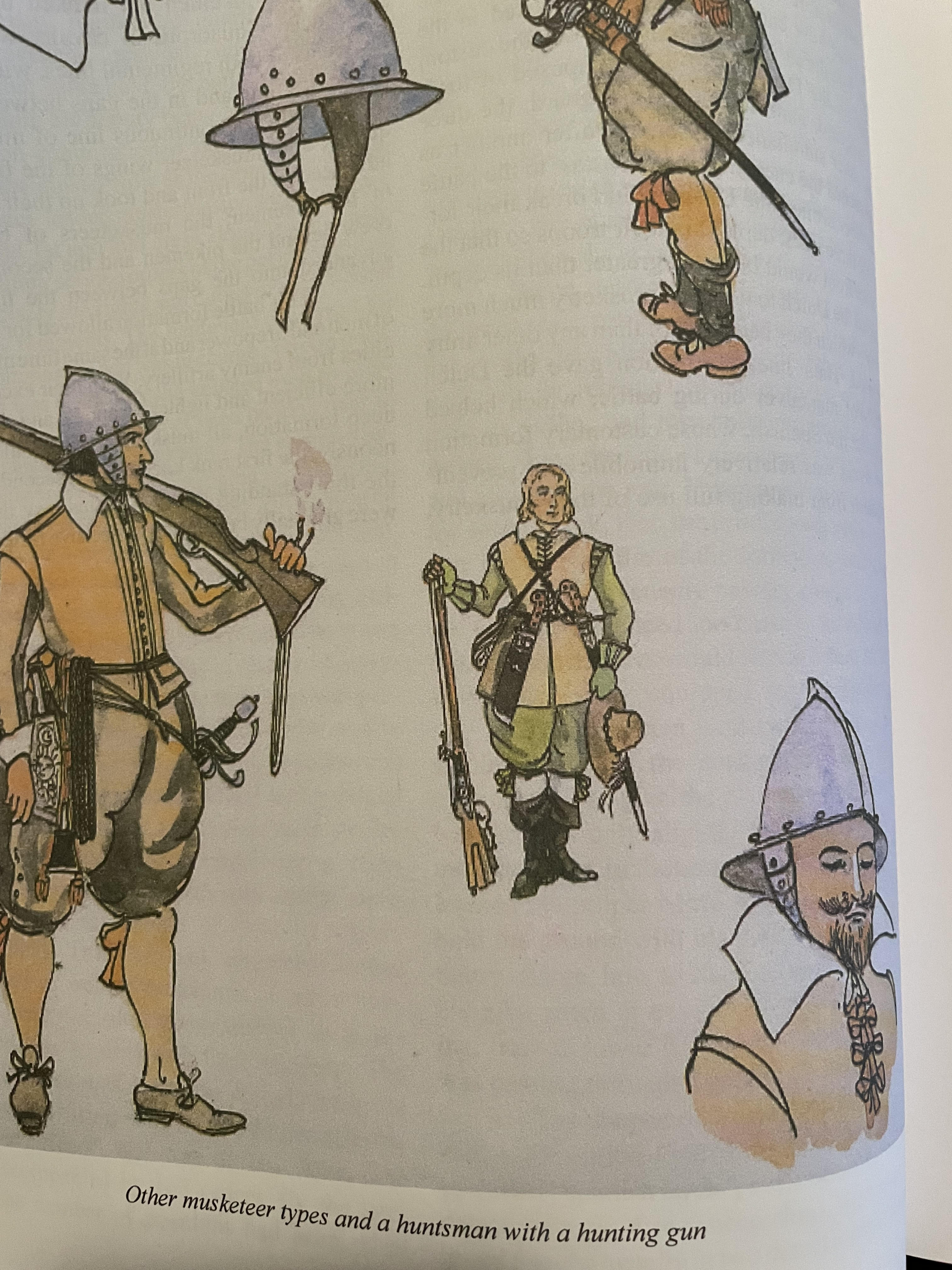 Very interesting, what information you did find.

A good read, as well as a chuckle (Australia), thanks.
T

I just realized I pointed out a typo while I forgot to close a quote. Whoops….

The quote on equipment from the first book was on page 35.