So here she is. The Double Double (for lack of a better description). A double 20 smoothbore with double ignition; flint and percussion cap. Made by Jones (I think John Jones) of Birmingham London. I'm guessing in the 1820's. I found records of Jones buying a shop in 1817. He died in 1837.

It was certainly used but is still in excellent condition. 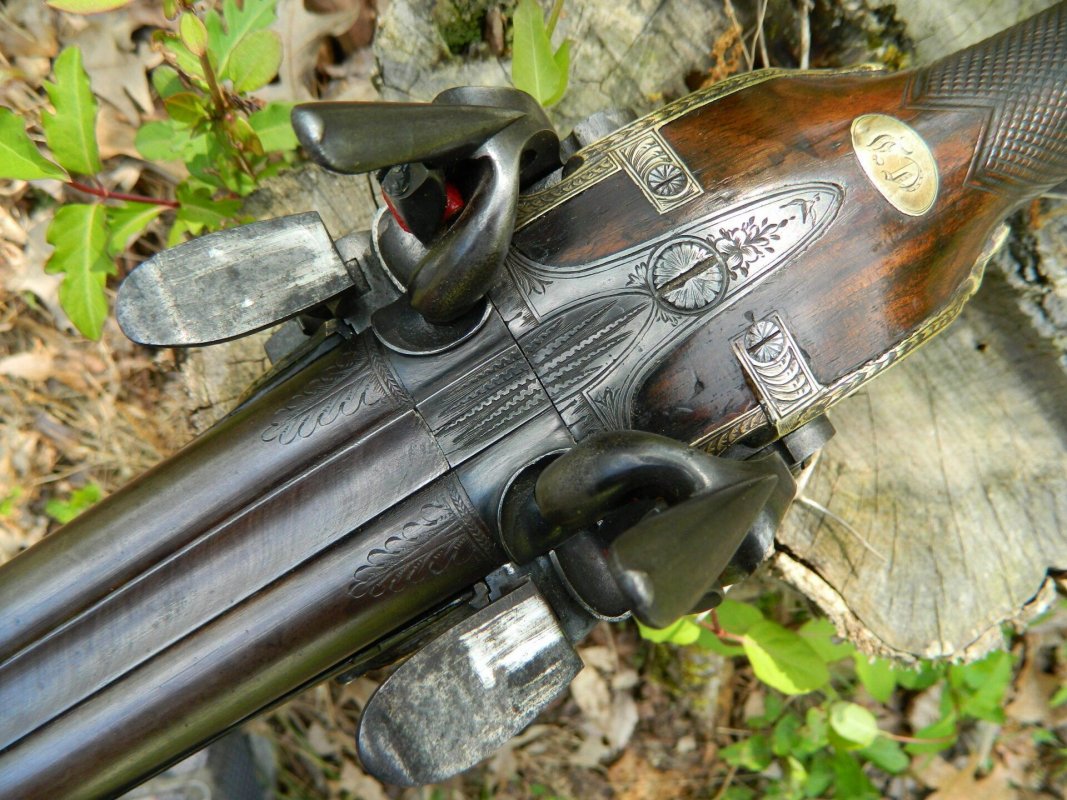 If you look closely at this next picture you'll see a plate that is pushed forward or back to cover/uncover the barrel's flash hole depending on whether shooting cap or flint. 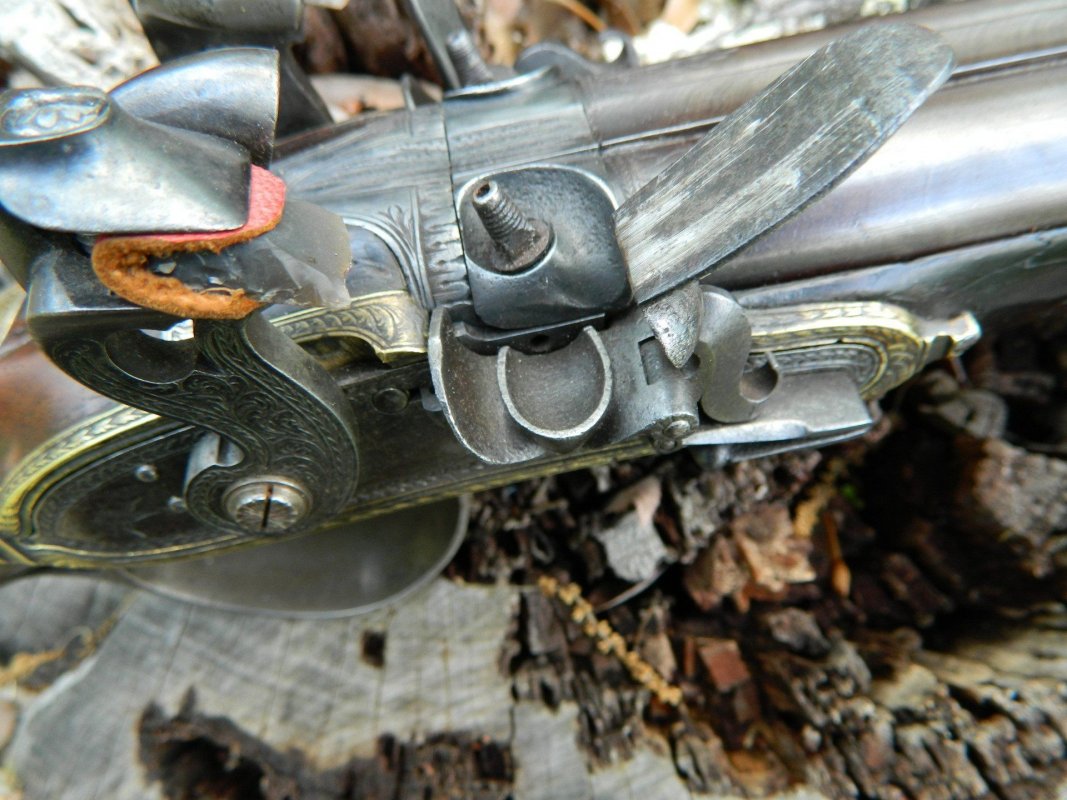 The scroll work is beautiful and intricate. 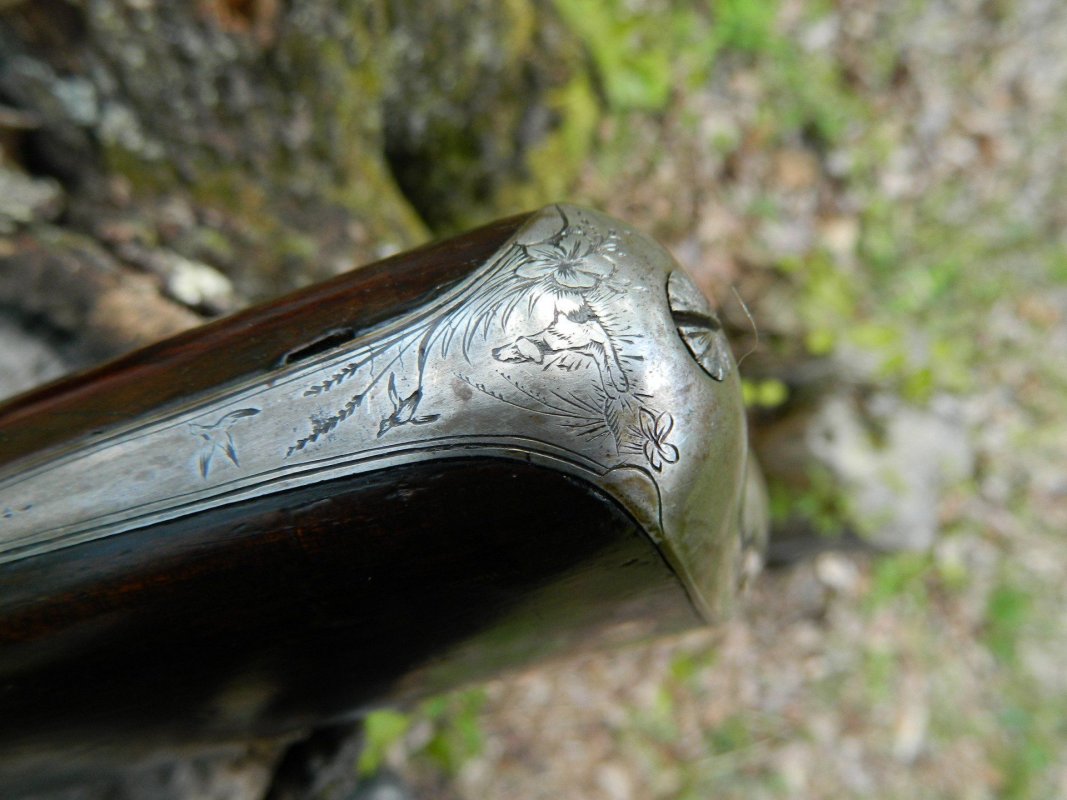 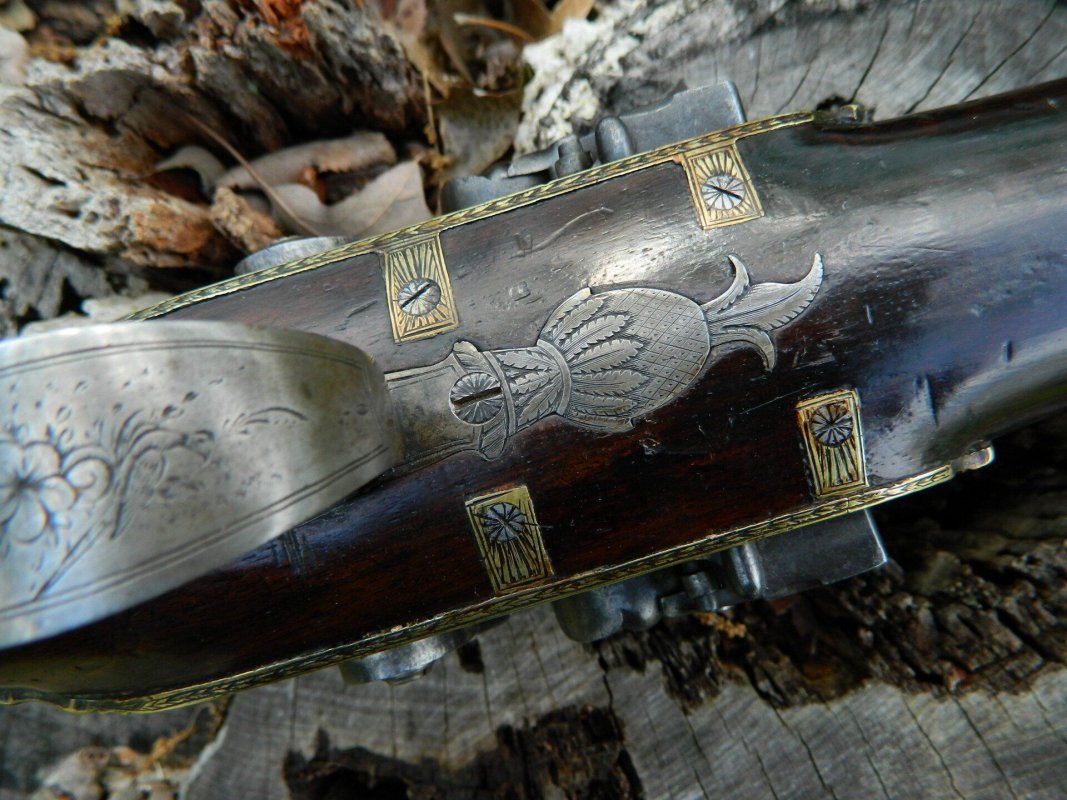 This next picture has me stumped. When I first saw this I thought a shoulder strap attachment. Yea that's not what this is because it retains the barrel in the stock. Quick takedown maybe? 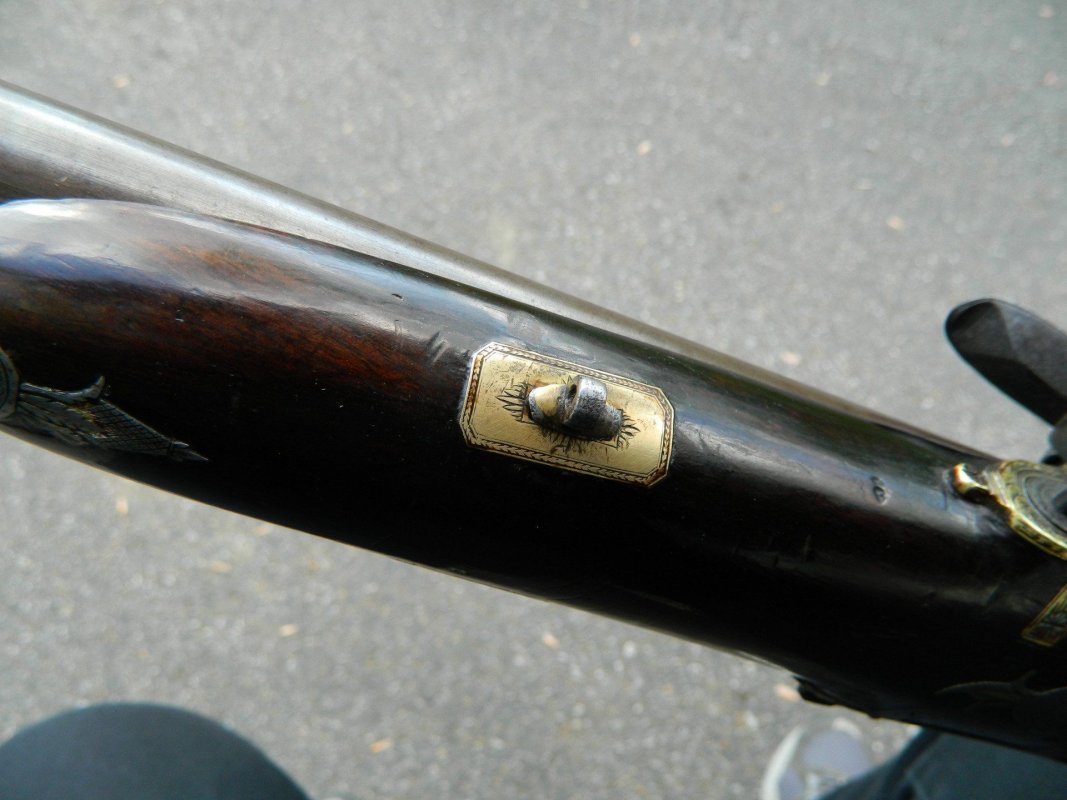 Even has the original ram rod. 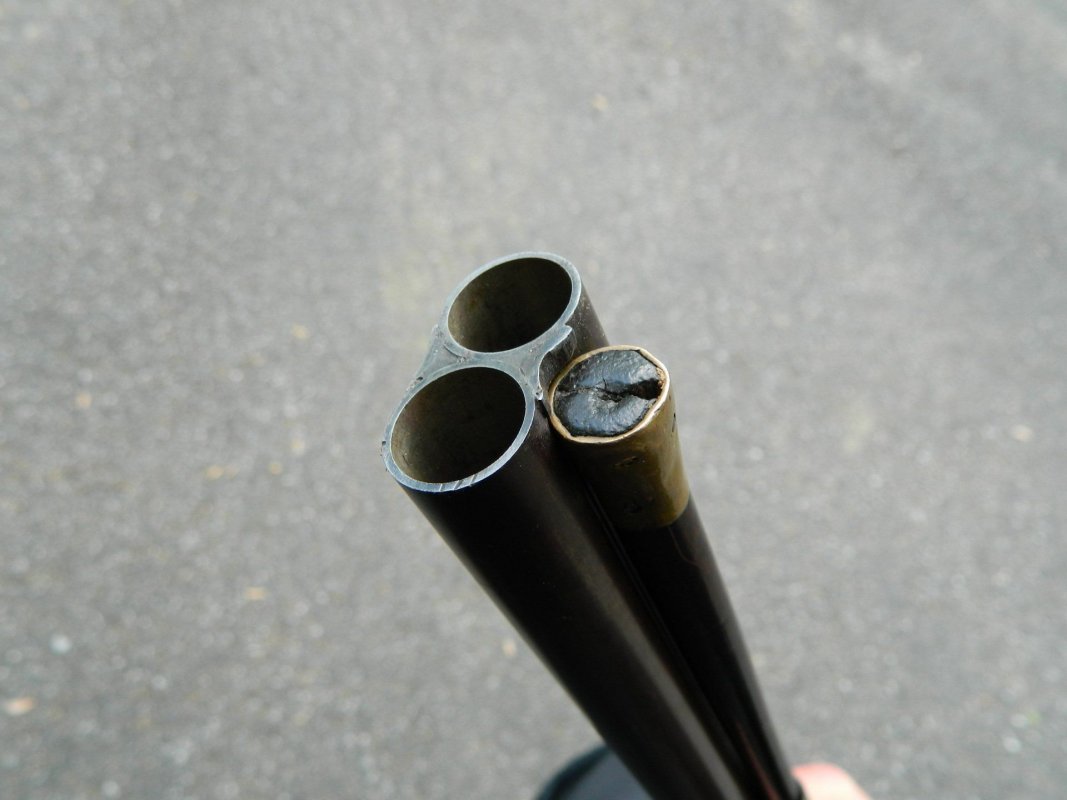 I am honored to be the current caretaker of this gun. And there it is, this gun will outlive me and hopefully those after me. I'm amazed at the genius, creativity and talent that people had using what we'd consider "old fashioned" hand tools.

And for me the most important statement this gun makes is just because you've never heard of it before, or it isn't in primary documentation, doesn't mean it didn't exist. 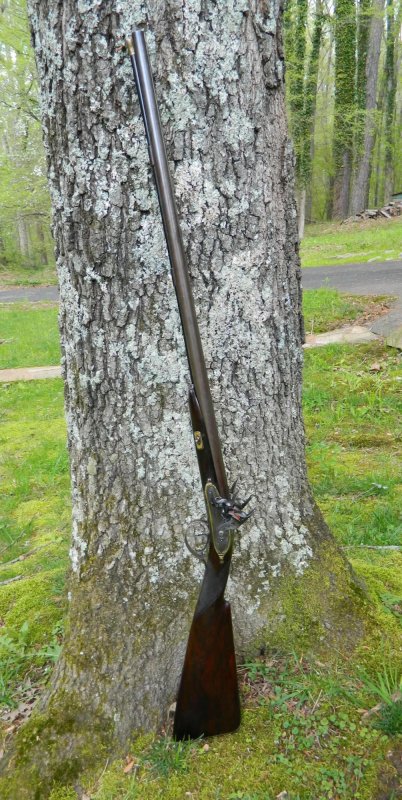 Where did I find it? A gentleman who comes across pristine and/or unique weapons.

Wow. Great find. I’ve never seen anything like it

Boy would it be cool if Pedersoli would offer a Replica of this gun.
You would be immune from cap shortages. Send this post to
Pedersoli for consideration. What a neat gun. Wow.
C

Cornstalk, Beautiful gun. Amazing in its artful design. Thank you for sharing.
John

That is amazing. I have never seen anything like it. But what a great idea.

That's incredible.
I love the brass framework around the lock with the way the tabs from it come around the tip and bottom of the lock panels.

Hmmmm, if using the flintlock option, wouldnt the percussion hammers start to mash the nipples without a cap on them?

I thought the same thing. I think something thin put over the nipple or inside the hammer should be enough to cushion the blow.

Absolutely beautiful, thank you muchly; at my age you start to think that you’ve seen everything, once again reality strikes

Looks beautiful but paradoxically a royal pain,,,,, to operate!
I hope I am wrong but I am thinking it was made for a very wealthy anxious person!

And the smith who forged those hammers!!

It is an endless curiosity. Why wasn't that design made here?
Very unique.
J

Really cool, for a belt and suspenders type of shooter so to speak.

One of the MOST interesting firearms I've ever seen. So much potential
Many thanks for sharing
T

I have never seen a flint /percussion, gun before!!

Beautifully done and appears that it would come up and hold nice too! well designed.
Robby

Britsmoothy said:
Looks beautiful but paradoxically a royal pain,,,,, to operate!
I hope I am wrong but I am thinking it was made for a very wealthy anxious person!
Click to expand...

Actually the only thing that is "additional" to either a flint or percussion gun is the sliding plate that covers/uncovers the flash hole. I'd imagine that changing between flint and percussion didn't happen very often. One either had caps or they didn't.

"made for a very wealthy anxious person", you might very well be correct. Hopefully once I start acquiring books about British gun makers I'll learn more...here is hoping anyway.

Robby, yes it does throw up to the shoulder perfectly and with good barrel alignment.

3Setters brings up an interesting point about the nipples being possibly mashed if not being used as a cap gun. His comment got me to wondering:

1. Certainly the thin copper of a cap isn't enough to protect the nipple? Could it be that the ignition of the cap is enough to soften the blow of the hammer on the nipple? I would think the main charge going off would be too late?

3. Would leaving a spent cap on the nipple protect it? Copper is hard but not as hard as iron so maybe it would absorb some of the impact? Do you guys that make your own caps reuse the spent ones?

Interesting questions. Of course the nipples could just be swapped out, but I don't want to do that to this gun for obvious reasons. Wouldn't Jones, the gunsmith that came up this gun, and the sliding plate to block off the touch hole, wouldn't he have already thought of this?

Perhaps when I start shooting this gun the questions will be answered. It's 8 degrees this morning, I'm disinclined to go outside and shoot although I'm certainly itching to.

That stock key with the loop hole is probably for a shoulder sling whose other end was a simple loop that slips over the stock and is pulled tight at the wrist. Goes on when the gun is secured across the back and the game is dragged out

Bought an incomplete project gun for USD65 - It has issues! Advice requested

Waugh, but I be a mountain man.