What would you believe a Texan soldier to have carried? Poor Boy rifles? Or is that beyond? I’ve seen multiple reports of different firearms. Also, do forgive me and redirect me if this is the wrong place for such a question.

Many came from Tennessee so a SMR would be appropriate. Military muskets too, including third model BRown Bess.
As to being ‘poor boy’ many SMR were silver mounted. But folk came from all over to Texas so about any gun found any where in the US might have been found.
Keep in mind it took a chunk of money to go to Texas. Poor folk that we oft see in fiction were not the majority. Many would have had enough to have had a good gun.
The true poor boy was more of a local production gun for a local set of buyers.
Keep in mind to more of us today wear glasses to an event then people would have seen then. A rifle doesn’t make a lot of sense if your target is a blob of color at a hundred yards. So more then one smoothie as a fowling piece or a smooth rifle would have been seen. This was ‘36, don’t underestimate them new fangled nipple hugger guns.

When Texian settlers mobilized, many took a fowler or rifle from home. As the Texas Revolution wore on, more and more muskets were acquired. The reason was because it was still the case that the rate of fire was viewed as more important than the accuracy of the rifle. That said, many rifles were put to good use at a number of armed clashes--killing artillery gunners and matrosses, counter-sniper fire against those Mexican cazadores armed with Baker .62 cal. rifles instead of the short NCO type British musket, etc.

As Loyalist Dave has posted, very many U.S. martial arms were used, including the Model 1795, and 1816 muskets. It is known that many of the Alabama Red Rovers acquired cadet muskets. The troops from the Georgia Battalion helped themselves to GA militia stores. Private purchases were made, and Texas sent purchasing agent to acquire arms and have them smuggled in. It is thought that the first company of New Orleans Greys had a preponderance of Model 1795s, but the second had very, very many model 1817 Common Rifles.

When Béxar was stormed by 300 men under Col. Ben Milam, the capitulation agreement stipulated that the Santanistas under Gen. Martín Perfecto de Cos could each take a musket and ten cartridges and a 4-pounder cannon with ten charges and stands of round ball and/or "saquillos de metralla" or grape-shot/ canister. There was concern that they'd get attacked by Comanches or other hostile Indians.

Left behind were the 21 cannon, including guns brought by Volunteers, the *real* Come and Take It cannon--a bronze 6-pounder--but also the guns left at the Alamo. Large stands of Mexican arms were left, the majority India-pattern Tower muskets, Napoleonic-era surplus weapons purchased in quantity throughout Spanish America, including by Mexico. In addition, the Mexican forces had some Baker rifles, Paget carbines, older Spanish patterns including the "escopeta" or "scuppet" as it was Anglicized, and some oddities like New Land Pattern muskets and the like.

A handful of cap lock weapons were known to have been around. Mirabeau Lamar, a wealthy man, had a cap-lock double gun. Travis had a double gun, and urged its universal adoption by the cavalry, although likely as not his was flintlock. Controversy surrounds Crockett's "Old Betsy" with some arguing that while he was a representative in Tennessee he had had the lock converted to a caplock. The only rifle with known Alamo provenance is a splendid Dickert rifle from Lancaster, Pennsylvania. Far and away the vast majority of weapons used in the Texas Revolution were single shot, muzzle loading muskets and some rifles.

The NRA magazine online has a brief article on some of the weapons, and there is also an old Texas Monthly article piece on the rifle associated with the Alamo defense. There have been some past threads on the Texas Revolution too, which a search might turn up.

Nice post, Dave. Yes, I recall a number of previous threads on this topic. The "Tejano force" is strong with this group.

Would like to see the firearm inventory of captured Texian arms by US Forces from the Snively Expedition. I feel it would be interesting.

Was the Dickert a cap or flint?

Sorry Brazosland, that Dickert at the Alamo is still a flintlock. If you google Alamo Dickert Rifle there are several sites with photos. Good luck!
B

Here is are a couple of pages from Noah Smithwick's The Evolution of a State: 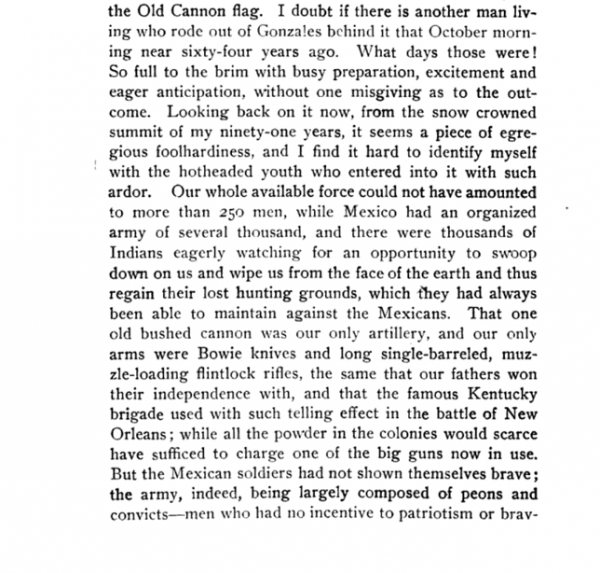 "...our only arms were Bowie knives and long single-barreled muzzle-loading rifles..."

"We had neither swords nor bayonets and few of us had pistols..."

Mr. Smithwick was not only an eyewitness to and participant in the Texas Revolution, he was also a gunsmith. I think his account is probably reliable.

I looked up the article from American Rifleman online, referenced above by Dave C. in post #4. You can find it here: Remembering the Guns of the Alamo This is a nice article (thanks, Dave!) that gives a lot of solid information about the Mexican Army's weapons, but information about guns carried by the Texians appears to be mostly "informed speculation." The author did recount the story of the Dickert Lancaster rifle, which was known to have been at the Alamo, and he reported the New Orleans Grays, a volunteer unit from Louisiana, were mostly armed with Deringer M1814 common rifles (The Rifle Shoppe has parts sets for these, if you want to build one or have one built). The author does point out that a great many immigrants and participants in the Texas revolution came from other states, and he assumes they brought guns with them from home. It would seem that a Tennessee rifle or even a late Lancaster styled rifle would be appropriate, in addition to the guns listed by others above.

The Texas Legacy Association also sponsors this Texian Guide Book for reenactors. There is a chapter on appropriate weaponry, but if it were me, I would double check and look for corroborating references.

The first quote in my post above should read "...our only arms were Bowie knives and long single-barreled muzzle-loading flintlock rifles..."

Sorry about the omission... It's important!

I happen to reside right here in Smithwicks backyard. I live on a very very small piece of the old Joseph Roger’s grant. Joseph was killed by a spear weilding local trying to get powder from old Fort Colorado to Hornsby’s blockhouse. I look out my front door across the hayfield to the Wilbarger grant and the Colorado river bottom. Smithwick was well acquainted with them all. As well as Martin Well’s who had the next grant west of the Rogers.
I digress.
Appreciate your post quoting Smithwick. One of my favorite books and well worth a study.

Edit oops forgot I wanted to mention! It is suspected that the “breechloadimg Yaeger (sic)” that the Coleman boy was using during the native raid on their homestead (Col. Robert Coleman family massacre) was a Hall breechloader. This location is about 4 miles from the place here.
Last edited: May 16, 2020
You must log in or register to reply here.
Share:
Facebook Twitter Reddit Pinterest Tumblr WhatsApp Email Link