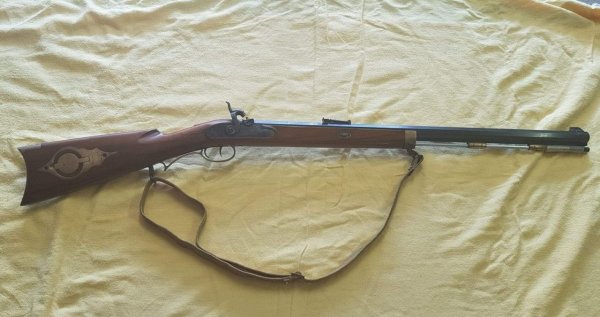 Just testing uploading pic's.
Looks like I'm not so dumb afterall.
Mod's if this is wrong place can you move it, looked for test site found nothing. thanks.
R

I'll make it legit. Welcome to the forum, I see you are able to post photos, you will get along great here!

the fellows on this forum have shown me that their pics of their weapons out in the woods against a tree or on a tree stump are far better than what I've done in the house with mine.

OB, Welcome and you did good with the photos. Tell us about the rifle in the picture.

Welcome, Old Bloke! Posting pics can be a challenge, but you seem to have the hang of it.

It looks like the CVA Frontier carbine to me. Wish I still had mine. It was a great shooter.

Old Bloke
Howdy...welcome to the wonderful wacky world of BP. You'll find about anything; and any information you need here from a fantastically intellectual bunch of craftsmen and folks who dang sure know their way around front stuffers.
God bless, and howdy again:
Two Feathers
T

Old Bloke, Welcome to the forum. Looks like you have the picture thing down.
Thomas

UM..., there's a blemish in the center of the photo of the blanket/sheet, that oddly resembles a caplock rifle. Better clean the camera lens.....

Loyalist Dave said:
UM..., there's a blemish in the center of the photo of the blanket/sheet, that oddly resembles a caplock rifle. Better clean the camera lens.....

You, Sir are nasty!

ppg1949 said:
OB, Welcome and you did good with the photos. Tell us about the rifle in the picture.
Click to expand...

Well, I was doing my best to buy this as my first ML.
But, the big brother has suspended all gun sales so still in limbo.
Wont be able to do anything till the ban is lifted.

It's a Lyman Hawken .45 cal, supposed to be 3 stars, so should be in good
nick. Can't even pick up my 410 (naughty word ) that's paid for and
sitting in the LGS.
Just have to mess with those other naughty ones.
Got plenty of reloading to do.
O

bore_butter said:
the fellows on this forum have shown me that their pics of their weapons out in the woods against a tree or on a tree stump are far better than what I've done in the house with mine.
Click to expand...

Yeah, looks better if you photo them outside.
I didn't take the pic.
O

Don't matter to me mate, I've got big shoulders.
Thanks anyway.
O

thomas said:
Old Bloke, Welcome to the forum. Looks like you have the picture thing down.
Thomas
Click to expand...

Thanks, I've been having problems with my puter accepting and loading pics
so thought I'd try something different and it worked.

Sum o us do njoy pickters

Here's a couple that shows rifles I built over several years. Opposite sides of the same rifles. 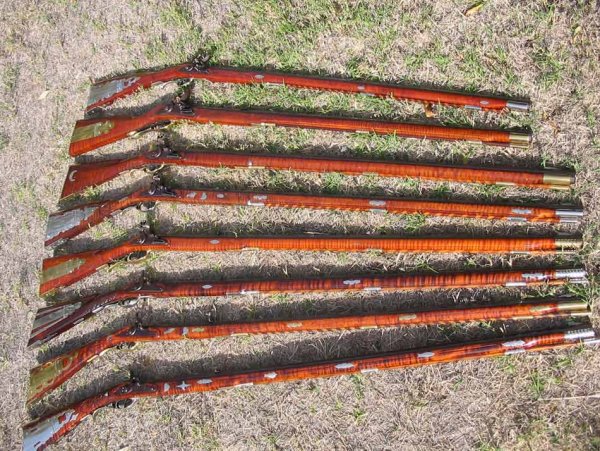 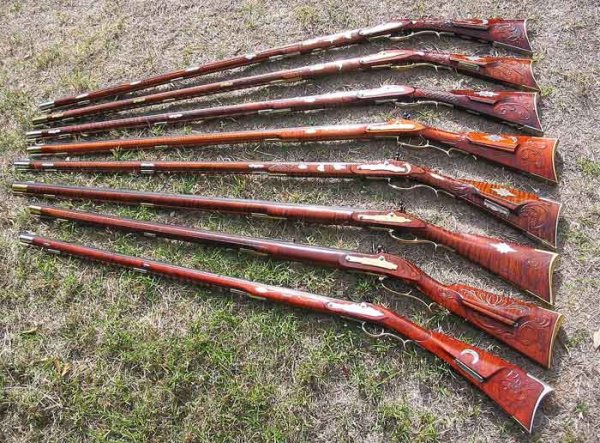 Whoa!!! Me thinks that Old Bloke (in post #13) misunderstood that Two Feathers comment (in post #10) was actually directed to Loyalist Dave's tongue-in-cheek's sarcastic remark (in post #9) about Old Bloke's photo having a smudge in the center resembling a rifle, and not to Old Bloke himself. I don't want Old Bloke to feel that he was being picked on here, when he wasn't, big shoulders or not. In any case, welcome Old Bloke!

And to Zonie, when in the world did you find the time to build all of those gorgeous rifles! You the man, dude!

Ack, I meant to put these photos in the Peep sights on my rifle thread.

I put a couple of peep sights on my rifles back when the old T/C Vernier tang sight was available and cheap. 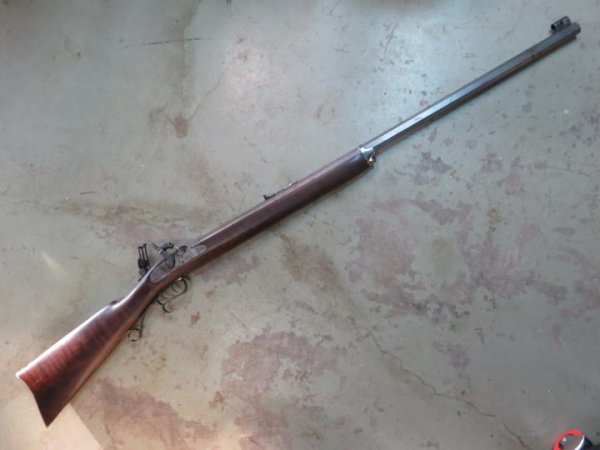 This rifle is a Franken "Hawken" with a T/C breech, lock, triggers and trigger guard, with a Sharon Barrel. 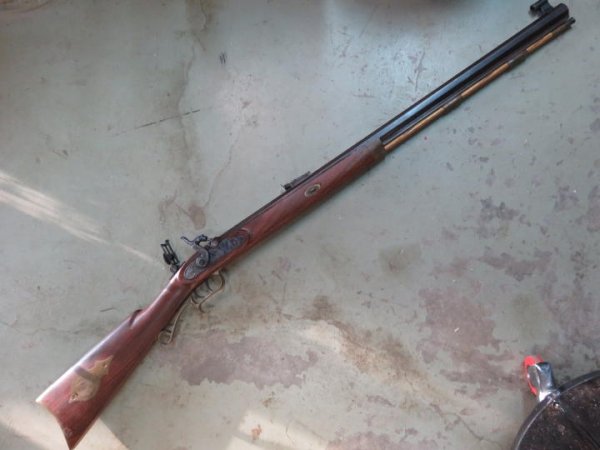 This one had the T/C Vernier sight with the T/C globe front sight. Very similar to the Lyman sights. 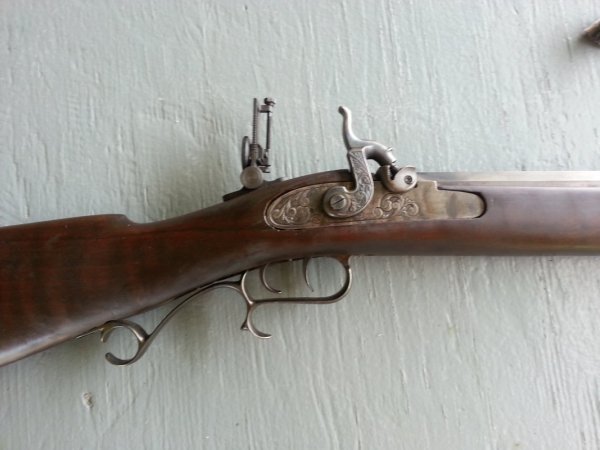 You would loosen the threaded fastener as the back of the peep and adjust a set screw to the left of the sight for windage and tighten the screw at the back to lock windage in place.

And to Zonie, when in the world did you find the time to build all of those gorgeous rifles! You the man, dude!
Click to expand...

I built those rifles (and more) to take my mind off of my work when I got home from the office every day. I had a rather high stress job that took a lot of mental work so, it was a nice change when I got home to use my hands to build things.
Almost all of those were built from parts I bought from Pecatonica River Longrifles. Each one of them took at least 8 months of work to finish but that was OK with me. I didn't have enough money to buy several kits a year and I didn't build them to get something to shoot as soon as possible.

Each one of them was patterened after a orignal long rifle using photographs of the old guns for reference. I did modify the carving from the original guns on some of them to make them a little less like a "copy" and a bit more like something that represented what I wanted to do.

As I said, the stocks came from Pecatonica River but on several of them I modified the shape considerably to represent a gun from a different "school". In those cases, the stock was basically just a hunk of raw material. 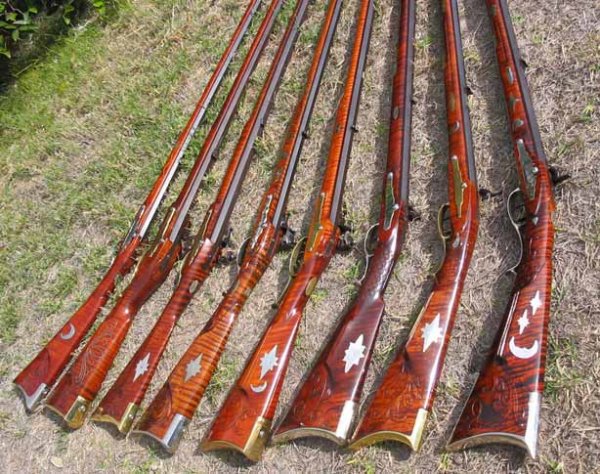 For instance, the rifle on the extreme right represents a gun from Franklin County. It looks quite a bit like a Bedford but it is a little more robust and it uses a conventional lock rather than the skinny styles Bedford County rifles use. I did decide to change the number of inlays on it by adding many more than the original gun had.
Several of them are also not exactly Period Correct (PC) because I wanted to use German Silver for the patchbox and furniture. German Silver wasn't used on the early guns, most if not all of them being made with brass furniture.
2
You must log in or register to reply here.
Share:
Facebook Twitter Reddit Pinterest Tumblr WhatsApp Email Link