Tell me about this English 14 bore double

This gun has me a little puzzled so any ideas or comments would be welcome. I don't have a picture but the proof marks show it was London proofed between 1855 and 1875 as a 14 bore. It was apparently found covered by silt in the local beck (stream) and I presume that the lack of oxygen has prevented it rusting and rotting away completely. It was given to me as the owners wife found it "spooky" and did not want it hanging on their wall. He had attempted to clean the metal work up, I'm assuming with a wire brush and a dremel, which has rather spoilt it, fortunately the woodwork was left untouched. Some parts are missing, particularly the left hammer, forend cap and take down button which makes me wonder if it was in a battered condition when it was presumably thrown in the beck. The corrosion on the barrel clearly shows the Damascus twist and the top rib seems to have the same pattern too.

The first thing that struck me was the pistol grip, I think a straight hand stock was far more popular at this time?
Next, although much damage has been done over time fit and finish appear to have been pretty good and the engraving looks reasonable and the hammer seems quite elaborate taking the form of what might be a horses hoof or possibly a shaggy dog head.

Below we can see some of the better preserved engraving and the two gold bars, do they indicate it was the second gun of a pair? Finally the tip of the pistol grip has clearly been carved with a lions face and at the very least the eyes were painted in. I have heard of this on earlier guns and it's somewhat similar to the Green Man on flintlock pistols but it's not something I would expect on a gun from this time. Was it added later by the owner of would have been made that way? This looks different from the normal provincial guns I have come across so was it actually a rather high quality but slightly eccentric piece? 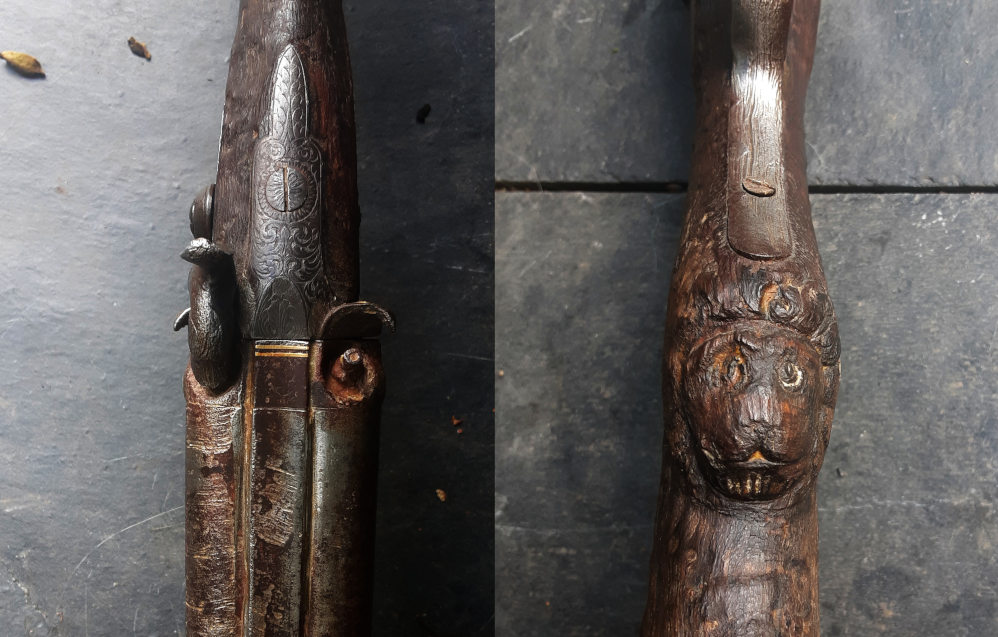 Well I understand this is an American forum and there may be less interest in English guns so even if nobody can shed further light on it I thought it was different enough that you might be interested to see it.

I don’t know a thing about it, but it’s a very interesting piece with an even more interesting story.

A very interesting piece and of more than ordinary quality, the interior of the lock alone shows that it was up-market.

BritJoe said:
This gun has me a little puzzled so any ideas or comments would be welcome. I don't have a picture but the proof marks show it was London proofed between 1855 and 1875 as a 14 bore. ...,

The first thing that struck me was the pistol grip, I think a straight hand stock was far more popular at this time?
Click to expand...

That's because that's called a Prince of Wales grip, not a pistol grip. It has only a slight curve and a rounded pommel, while pistol grips are normally more curved and often also include a squared pommel.

Queen Victoria's eldest son, "Bertie" [Albert Edward] was the Prince of Wales from 1841 to 1901, and while Prince of Wales, had all of his shotguns made with that style of stock. In 1901 he became His Royal Britannic Majesty ; Emperor of India, King Edward VII of England until his death in 1910. I'd venture to guess that piece was made in the 1860's which would allow Bertie to be old enough to order the special stocks for his guns and he was still the prince, hence the name...,, and allow time for the style to catch on, but also allow for the fact that by the 1870's such an elaborate style stock would likely be found on a breech loading shotgun, eh?

It was probably a "duck" gun..., as it's larger than 16 bore, which in England was a rather "all around bore" for birds.

Not a duck gun if it was it would have 32inch barrels and be a 10 bore although some 12 bores were built with 32 inch barrels for wild fowling The half pistol grip was around in the percussion era but became more common in the top lever hammer guns of the 1890,s At some time some armature had tried to carve a flintlock grotesque mask on the pistol grip but a poor job that's maybe why it was disbanded and thrown in the beck.
Feltwad
B

It really was remiss of me not to give the dimensions, overall length 45.5 inches, barrels 29 inches. Also of course there is no discernible makers name.


Loyalist Dave said:
That's because that's called a Prince of Wales grip, not a pistol grip.
Click to expand...

Yes, I knew it was a "Prince of Wales" grip but didn't say it because to be honest I've never quite worked out exactly what makes a Prince of Wales grip and I associate them with breech loaders. I suppose if it was a well made gun as I think it appears to have been then whoever ordered it was wanting to keep up with the fashion of the day and could afford to do so.


Feltwad said:
had tried to carve a flintlock grotesque mask on the pistol grip
Click to expand...

Good word "grotesgue". I've seen them on flintlocks and they have a certain style which is artistic and appealing while this has more of a rustic "charm". I'm not saying the person who did it lacked talent but it's not the work of a craftsman and not in keeping with the gun, especially when it has been further highlighted with paint.

I understand many quality guns were handed down through generations and it may be that this on was soon replaced by a breech loader and passed through several hands before reaching the beck and I'd say the left hammer was probably broken off at some point before it went in. What amazes me is that given the overall condition of the gun the right lock is fully functional, it's so good it's just a shame it's not a drop in fit for my Ardesa!
F

There was several muzzle loading building generations in the North East UK who built the half pistol grip muzzle loader one that come s to mind was Joseph Teasdale senior whose business was in Silver St Durham City .
Feltwad
R

Dear Feltwad I think you might be slightly unkind to the grip carveing , it has been roughed up and sleeping in the beck a long time . But as useual your obervations are right on the money .viz good .
Regards Rudyard
S

The Prince of Wales grip was considered by some to be superior for guns with two triggers.
S

The Prince of Wales grip was considered by some to be superior for guns with two triggers.

Please tell me, what was this rifle before it got "decorated"
2