What diameter target do y’all use? I went the range yesterday and was shooting at a 4” diameter red dot. It was ok till I started losing the light. I could barely see that sucker at 50 yards and it disappeared at 100. Either I’m shooting at the wrong size target for open sights or I’ve gone blind.

Use as big as you need. I like to keep is small as possible for accuracy sake, but it still has to be big enough to see. I use to use a 4" at 100y but I'm not sure I could see it good enough these days. Been awhile since I shot at 100y with open sights.

I prefer a small target with a distinct aiming point. I rarely do well on targets like the animal ones but can hit the X target well. Color is a factor too and red would be a tough one for me. 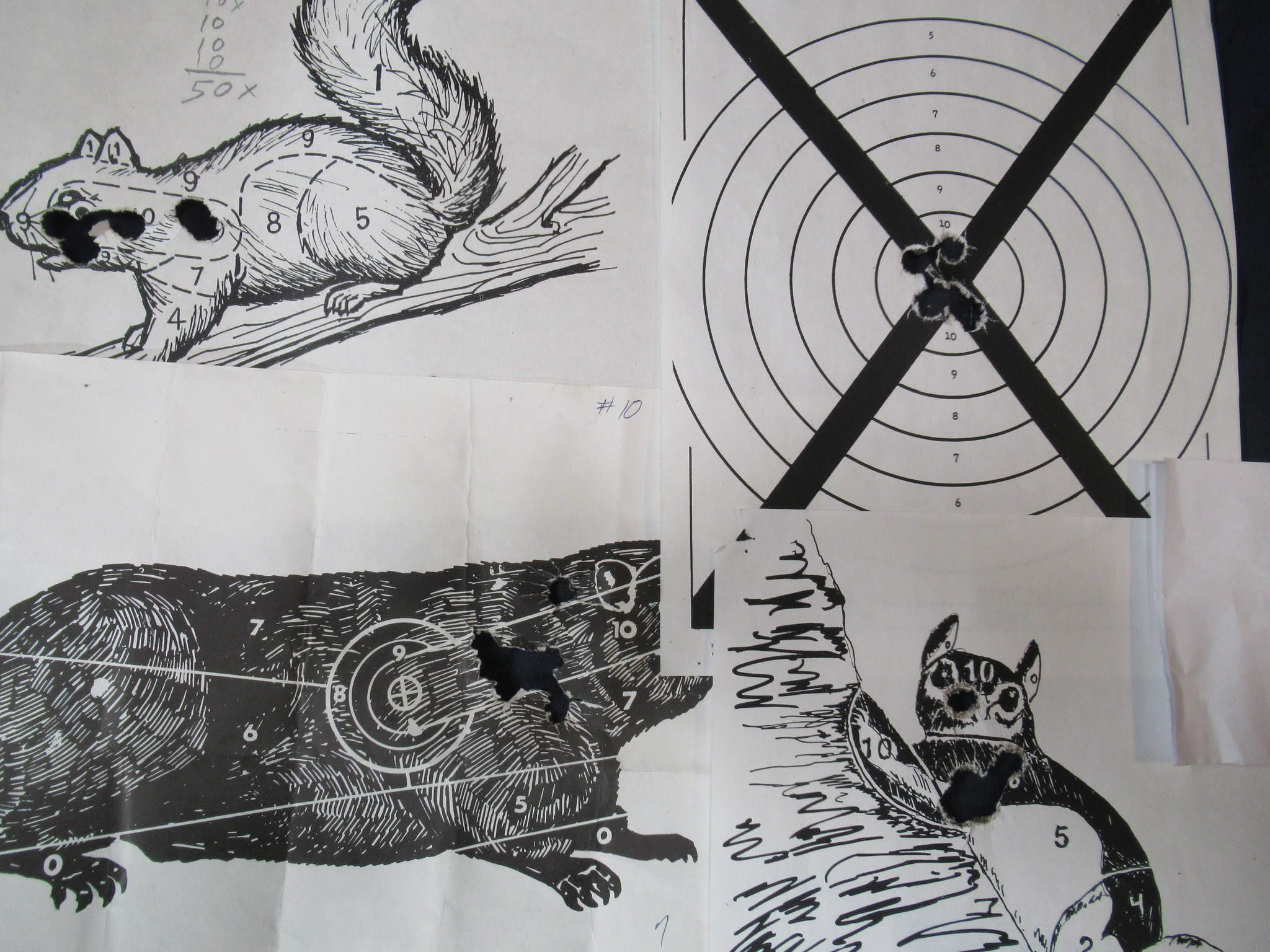 Maybe the color is what got me. I was shooting just fine at 50 yards, but once the light started getting bad I was in trouble. At least I got my sights adjusted before then. Next trip I think I’ll change it to black and maybe bump the size up a bit. And I guess I’ll go to the dang eye doctor.

I like those shoot-n-see targets. I think they're 6 inch.

Stykbow said:
What diameter target do y’all use?
Click to expand...

Me too. Even better with a small orange one over the bull.

I have trouble with red and orange, green is fine.

For 'bout 20 years I been using 4" sq. of orange duct tape on a blank target paper background. Ya kin shoot early and late w/ that combo. Finally , cobbled up a peep sight for my .50 cal. longrifle. Still doing pretty good out to 75 yd's . Pity the deer that stands for me at 50. Can taste the meat loaf even now. Try the orange duct tape and blank paper. Don't be too stuck in your ways to make up your own unofficial targets. I've used desk blotters , backs of calendar sheets , cardboard , back sides of regular targets ,use what ya got.. Luck and good shooting to ya .........oldwood

Stykbow said:
What diameter target do y’all use? I went the range yesterday and was shooting at a 4” diameter red dot. It was ok till I started losing the light. I could barely see that sucker at 50 yards and it disappeared at 100. Either I’m shooting at the wrong size target for open sights or I’ve gone blind.

I shoot to hunt. Which means my target shooting is for fun, but..., it's meant to keep my shooting skills good for deer. So I don't use anything larger as an aiming point than a 6" diameter target. IF I start throwing rounds outside of that, I'm know I'm doing something wrong. I like to have a tighter grouping than 6" for sure, but it's my personal standard that if I can't keep the shots inside that..., at X distance..., I need to pass on an actual deer at that distance because shooting outside of that may mean a bad wound and not a humane kill.

The other thing I think a smaller target gives me is confirmation on what my sights are going and what I am doing when I sight. So with the two crude drawings below, the one on the left, IF I shoot a group off center just a bit, is it me or are the sights needing adjustment. The one on the left is actually a tiny bit skewed right. The right hand example though, gives me a much more definite "hold" (from the supported position on the bench), so If my group isn't hitting the target then likely my sights got knocked a tad off.

The other thing that you learn from different light levels, is that if you're not seeing a clear target, then likely if you're working on hunting skills, the deer which are much less contrasting than a target will be too dim to shoot. You'll know when the light is too bad, regardless of the official "time of sundown" when you won't be able to shoot.

I’m a hunter. I target shoot just to keep in practice and because it’s fun. I have no worries about hitting a deer in the light conditions that made the target dot tough. It’s been years since I shot iron sights much and was mostly wondering if I was just asking too much from my eyes. I make my targets on my computer so change is easy. I’ll just blow them up a bit and use several colors to see which is best. Thanks to all for the responses.

Tom A Hawk said:
Me too. Even better with a small orange one over the bull.
Click to expand...

I'm far sighted and have not much trouble seeing the bull. However, I was having an issue with getting a good sight picture and have just replaced the front sight on my Hawken with a thicker one. This seems to be making a good improvement.

Like others here, I shoot for fun, keep the skill level up, and for hunting.
I like point of aim. And I generally use a large target - so I can see the thing.
After all it is just a reference point. This works well for me in load development.
If it's too hard for me to see then my eyes are working too hard and the front sight focus weakens. My flintlock has the skinny front sight so a larger target is helpful.
My caplock has a thicker front sight - actually a Lyman GPR. Which is easy to see.
Adapting to a thicker front is not difficult. Your eye and brain will find center.
Let's not forget that your eye is the real sight. The more we strain to see the front the tougher it gets to do it.
S

I like those orange stick on target dots. Usually put a 3 inch dot on a white backer for 50 yard shooting. A 1 or 2 inch dot for 25 yard targets with the .32 caliber. I rarely shoot muzzleloaders at 100 yards, but for those few times a year I get the urge, a 6 inch dot works well.
B 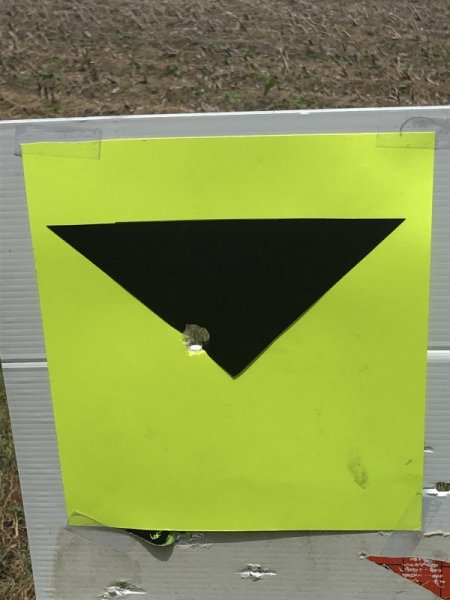 Got this idea from someone else, but its great for older eyes. You don't have to focus on your sights and center of a circle. Just set the tip of that triangle on top of your front sight and you can see this target long after its to dark to see the sights on your rifle. Fluorescent green poster board and black construction paper.
N

I like silhouette targets but I have 3in steel out to 150yards. But for BP I go torso size.
E

I use cardboard and painter's tape for sighting in.. Gives me a horizontal and vertical reference. 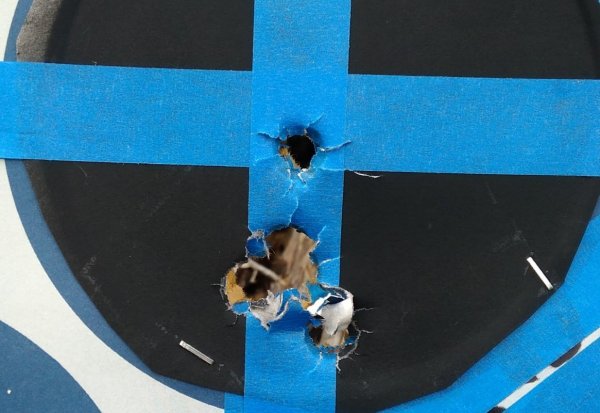 Stykbow said:
What diameter target do y’all use? I went the range yesterday and was shooting at a 4” diameter red dot. It was ok till I started losing the light. I could barely see that sucker at 50 yards and it disappeared at 100. Either I’m shooting at the wrong size target for open sights or I’ve gone blind.

My serious targets for obtaining group or sight adjust: .75" to 1" vertical and horizontal black or red lines on a white paper, size 11" wide X 14" high.
Lines are full lenght and full width. You are of course aiming at the center, but the sights will cover that center. These extending lines will help you line up the center which you can't see. Works for me!
Larry
M