My first muzzleloader, in the mid-70s was a swivel gun. It had two barrels, one lock, one trigger of course. You loaded both barrels, fired one, twisted the barrels until you could feel the detent engage, then fire the other barrel. The barrels were only 30 inches long, and the lock was half as long as a normal lock, as though a normal lock plate was cut in half and the internal lock parts squeezed into the available space. That made the mainspring too short for it to have enough power to slam the hammer down hard enough to light off a cap reliably. Far too many hang fires and failures to fire at all. The one thing I enjoyed about it was sanding it down and applying the old-fashioned Browning compound on the barrel when it was hot enough to make the Browning liquid sizzle as I brushed it on. Instant durable browning, no time spent rusting. It gave a beautiful deep toned
.slightly reddish very durable brown color that was evenly satin. That browning formula has to be 100% unavailable now probably because of mercury. Maybe I can find a hobby chemist to make up a batch for me.

What caliber was that gun? Sounds like the Nessmuk rifle. Both barrels on his were .45.

It sounds like you had a Numrich swivel breech gun. The locks on those were the weakest point of the gun but it was meant to be an inexpensive piece. 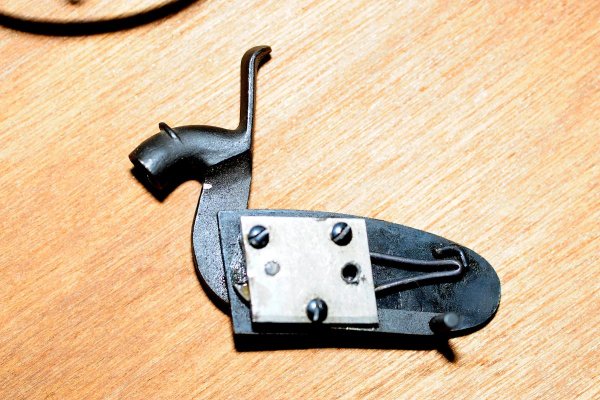 So funny. I thought ‘swivel gun’ like a small cannon, two barrels???? What??? Then ohhhhhh.

Yes, @tenngun, I first thought this was a gun mounted on a swivel such as a signaling canon or wall gun. The old German term was wender or twist barrel.
G

Hermit Tim said:
What caliber was that gun? Sounds like the Nessmuk rifle. Both barrels on his were .45.
Click to expand...

hawkeye2 said:
It sounds like you had a Numrich swivel breech gun. The locks on those were the weakest point of the gun but it was meant to be an inexpensive piece.View attachment 96535
Click to expand...

That's the lock allrght. I took it to a gunsmith asking him to make the spring stronger, but he cobbed in some spring that was even weaker. Also I didn't know how to clean barrels so that was a problem. It must have been quite cheap or I never could have bought it back then.
You must log in or register to reply here.
Share:
Facebook Twitter Reddit Pinterest Tumblr WhatsApp Email Link