So I bought myself a Pedersoli Bounty Hunter Pistol.

Id just stick with the roundballs. Doesn’t get much better than a 1.5 inch group with a handgun. Some will disagree but with my eyes I’d be happy.

If there ain't no pictures then it's not real.
M

I'll get you some pics.

I love those old Kentucky style/Pirate looking pistols. I have a .45 Miroku
that I love. These were offered as kits By Sears at one time, the prior
owner told me. Made in Japan, but I shoot 50gr 3f with RB and it is
accurate and I believe a great safety item in areas where maybe the
unmentionables are legally frowned upon(photo coming up). Ya I know its loaded. 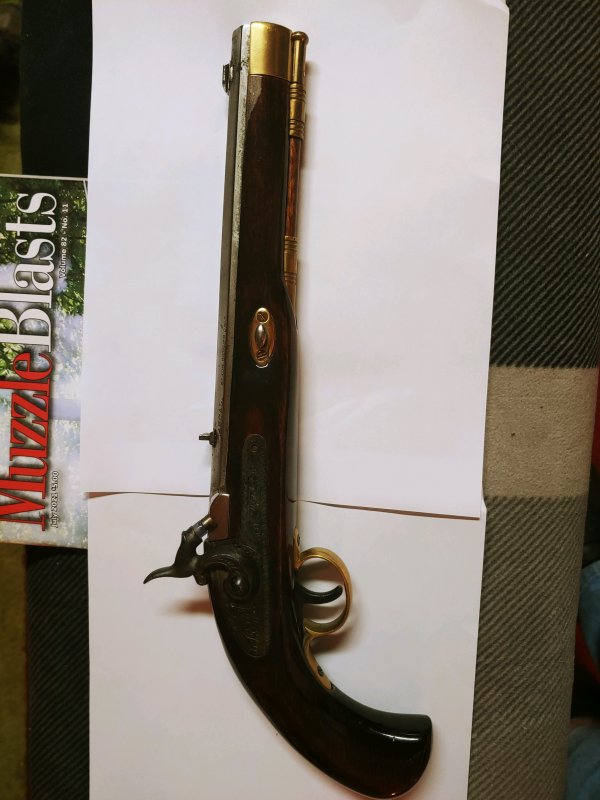 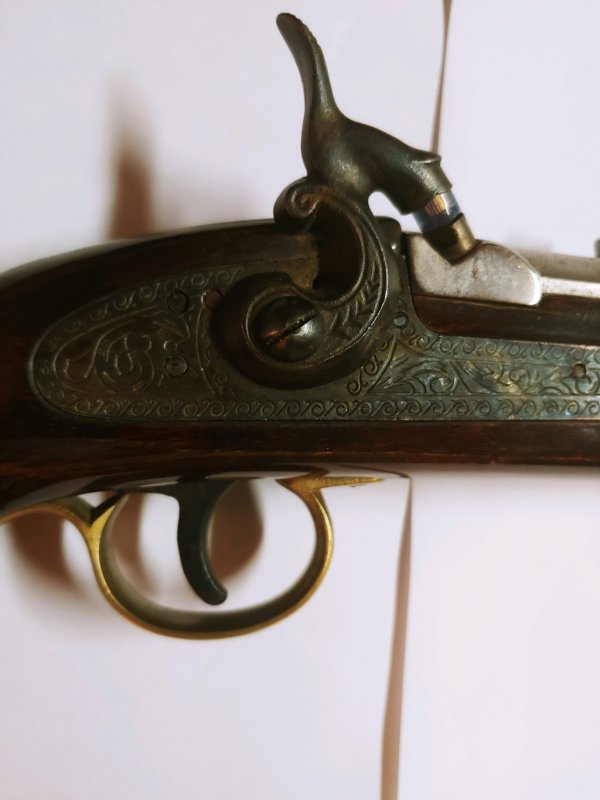 Besides I think that heavy a bullet will put a lot of stress on your wrist and you palm where the thumb joint rests.

Thanks for the report. I'm eyein' a flintlock version BUT my AC just blew-up, so my gun budget is going to be depleted by the HVAC guy.

I want to fit mine with a removable shoulder stock. I was thinkin' about doing a sort of Colonel Mortimer, 18th century style.

I saw those at Midway, and was really tempted, but I've already spent way too much $$$ this year on stuff. Looks like you are getting some pretty good results with yours.
M

I have an old CVA pistol in .45 cal, looks like yours. I only load 20 grns 3F and a .440 prb in it and it shoots really well. With this I look for accuracy not power. I have no idea how old it is as I got it second or third hand for a real good price.

My CVA Mountain pistol is 50 cal and i want to try some 240 grn PA bullets but just havent got around to it yet.
M

mushka said:
I have an old CVA pistol in .45 cal, looks like yours. I only load 20 grns 3F and a .440 prb in it and it shoots really well. With this I look for accuracy not power. I have no idea how old it is as I got it second or third hand for a real good price.
Click to expand...

I think the groups you are getting would satisfy almost any of us.

With upping the powder charge in a short barrel, as on a pistol, you can reach a point at which you are just blowing unburned powder out of the muzzle. So, in a pistol, powder charges might be necessarily less than in a muzzleloading rifle of the same caliber, which could burn a heavier charge in its longer barrel. You need the faster twist in the pistol barrel to stabilize the ball with the lower powder charge. 1:18 sounds appropriate to me.

In their book about percussion handguns, authors Mike Cumpston and Johnny Bates reported trying Lee R.E.A.L. bullets in a Lyman Plains Pistol with good results, so people have tried that sort of thing. However, I don't know if you can get a bullet like that for your .445" Bounty Hunter, and I'm not necessarily recommending that you try it. I think you are getting excellent round all accuracy and performance from a pistol intended for patched round balls.

Enjoy your pistol! It sounds like you got a good one.

That Pedersoli "Bounty" pistol is a favorite of mine. I got Pedersoli's kit, and built one for my son. Nice, even walnut in the stock, but little or no fancy grain. The inletting is close and tight.
I did do some checkering on that long forearm - with a 16" barrel, you can do well by using one hand on the pistol grip, one hand on the forearm, just a with a rifle.
Those 8 lands/grooves seem to impart a fine spin to about anything. I test shot the one I built, and on the bench at 25 yards, 30 gr with a .440 ball, 0.015 patch seemed to produce nice groups. Did not measure them, but the three shots almost made a cloverleaf. Don't know what the heck he is doing with it now, as we are no longer in touch.
I am trying to get the flint version for myself.

Only other adjustment you could make would be to try with some .015 patches. But 1.5" is a great group with a pistol!

Boy would I love to hunt with that !

Britsmoothy said:
Boy would I love to hunt with that !

bobthemotorcycle said:
If there ain't no pictures then it's not real.
Click to expand...

Pedersoli’s recommended load for that pistol is 20g, with a maximum of 30g.