One of my favorite rifles and incredibly accurate from bench, but pull just too much offhand. Running a tuned Chambers lock with a good clean engagement at sear/tumbler.....and I'd be hesitant doing much more there or with sear spring. Would rather improve trigger at this point to see what i can get. In the following photos, the red lines indicate where the trigger bar hits sear arm and where my tang bolt goes. While its pinned nice and high for a good lever, the sear arm hits really far back on the trigger bar too. If i extend the trigger pivot tabs and pin in generally where my little red dot is, that should be about as good as i can improve this setup correct? 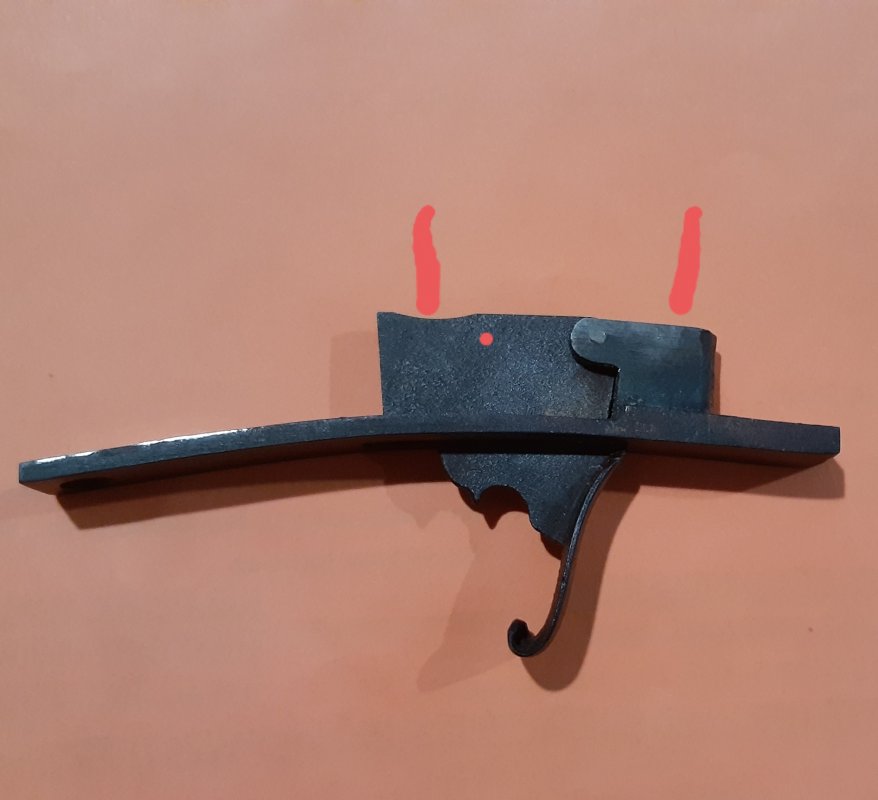 I'd make a new trigger. I'd pin the trigger through the stock. This pin will be higher than the current position on the tabs that are part of the trigger plate (So, you'll have to also make a new trigger plate). In order to have the pin higher- that area needs to extend higher, sloped upward from rear to front.
Instructions: If the pin through the stock is under the lock plate and the side plate- it won't be seen. If you don't like it- just go back to what you now have.
Start with Plexiglas trigger. If you like it, then go to the trouble of making a metal trigger. You might have to remove a little more wood it the stock to make the higher trigger fit. If there are gaps on either side of trigger- to wood, it really isn't a problem but small washers can be used. You should be able to get a 2-3 pound pull. If all is well, make a new trigger plate and you are done.
L

Yes what you are proposing will "work". You are shortening the "moment" of leverage against the lock sear, while keeping the longer "moment" of leverage for the trigger, so..., less force will be needed to do the same amount of "work" compared to the current arrangement where both "moments" are pretty similar. 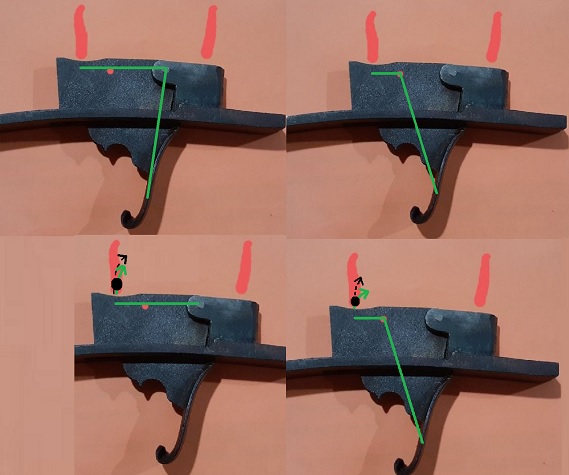 Also, Red Owl is right, better to make a new trigger to do what you want rather than modify the current one.

Red Owl said:
I'd make a new trigger. I'd pin the trigger through the stock. This pin will be higher than the current position on the tabs that are part of the trigger plate (So, you'll have to also make a new trigger plate). In order to have the pin higher- that area needs to extend higher, sloped upward from rear to front.
Instructions: If the pin through the stock is under the lock plate and the side plate- it won't be seen. If you don't like it- just go back to what you now have.
Start with Plexiglas trigger. If you like it, then go to the trouble of making a metal trigger. You might have to remove a little more wood it the stock to make the higher trigger fit. If there are gaps on either side of trigger- to wood, it really isn't a problem but small washers can be used. You should be able to get a 2-3 pound pull. If all is well, make a new trigger plate and you are done.
Click to expand...

Excuse my ignorance, but my mind is having trouble understanding your reply. First of all, why will the pin be higher and what difference will it make? When the tabs are extended to intersect the new pin location that new hole can be adjusted accordingly. If the bar is too high or too low, that can also be corrected. Help and old man out.
Thanks
Larry

I bought into the trigger "unit" with trigger and plate attached to each other on my first build, I never could get the geometry right for the kind of trigger response I wanted. Like was suggested I started making my own triggers and plates and have done so on any rifle or fowler I made since that didn't have a DST. I have some sweet single triggers on my guns.

I can't find it now but there is a complete tutorial on single triggers, it may be on Tracks site, it is about installing a single pinned trigger to get the best response.
J

Most builders will set the pivot point about 1/4" - 3/8" from the sear contact point. I don't subscribe to this. I prefer somewhere around 1/2" or maybe a bit more. With a short distance you decrease the force required to set off the lock, but also increase the travel necessary. With a well-designed and assembled lock, you can have the 1/2" distance which minimizes travel and still get a 2-3 lb trigger pull with ease. Most commercial locks probably won't do this, though without some further work.

1/2" lateral and 1/16" higher than the sear contact made for a very nice trigger pull with my Davis late English flintlock. Shorter lateral distance made for light weight, but lots of creeeeeeeeep.
F

Trigger needs to move up and back. Pin it in the stock.
You probably won’t be able to use the existing blade. Keep the old plate, just because it fits the inlet. Buy or make another blade, and pin it a bit above the sear, and approximately ⅝” in front.
You should have a 2-3 lb pull.
R

It is a crowbar effect, the longer the handle, the lighter the effort. By moving the pin higher you reduce the trigger pull to trip the sear. If you look at old firearms this pin through the stock is often visible BELOW the lock plate or side plate. The lock plate is larger than the side plate so in many cases one end of the hole will be covered by the lock plate while the other is visible just under the side plate. I admit, I take things farther than normal. There is an upward hump to the trigger blade in the forward end to reach a higher than normal pin. I was a little concerned about deepening the mortise but I haven't had a problem. As I said, this is a completely reversible endeavor- if you don't like it, take out the new trigger and pin and then use the original.
There are after market trigger plates with high posts, which do the same thing but in most instances you need to change the trigger plate mortise and that creates a modification that is not reversible..
ONCE AGAIN- try the Plexiglas- I often make about 3 triggers until I get what I want- it only takes a few minutes to file out Plexiglas triggers and they are strong enough to trip the sear.
And (always one more thing)...From the photo-what you already have contains a fairly high pin position- some of the less expensive items have very short tabs with the pin resting right on the top of the trigger plate.
S

What you have right now is about 1:1 force on the trigger being transmitted to the sear bar. I you move the pivot closer to the sear bar the pull will bet lighter but the it will also get songer a creepier.

If the sear spring is not as long as it can be and still fit, it need to be replaced. Having it push on the sear further out causes the force needed to move the sear to increase dramatically. With all common locks I always make a new spring that fits properly and is of an appropriate strength. It should not take gorilla strength to trip the sear bar with your thumb. If it does that needs to be repaired.
R

Yes, using the crowbar analogy a shorter end against what is being pried and/or a longer end being pulled on. As stated an overly strong sear spring can also increase the pull.
V

Early on, I used a "U" shaped piece silver soldered to the trigger plate for the trigger pivot pin and the pivot pin bracket was 5/8" high. The trigger pull is around 2lbs and this flint squirrel LR has head hit 100s of squirrels. I now pin the triggers through the stock and the trigger pulls are a crisp 2-1/2 to 3 lbs.

"Chambers at one time attempted to have the sear bar locations the same at half and full cock on their locks, but judging from the later locks, this wasn't exact. .....Fred "

It should be that way. IF the 1/2 cock notch is higher than the full cock, and many are, the fly comes into play with a simple trigger. IF there is no fly the sear nose, and notch, will be beaten and deformed.
J

Did lots of measurements today and i have plenty of room to pin a revised trigger through the stock just above the sear arm contact and 3/8-1/2" forward. However, this is a SMR with no sideplate to hide pin so ive got to get creative with a blind pin location removable from lock plate side. No big issue, lots of meat to work with.
R

Couple of things....REMEMBER stock pinning a trigger is historically correct so having it exposed on the side plate side of the stock isn't an issue- try surfing the web for photos of original rifles and you'll see the pin. Photos usually show the lock side so you'll have to look a bit.
ON THE BLIND HOLE- how do you pull the pin out?????? Been there- done that, usually needle nosed pliers an an hour worth of time and was fortunate I got it out. The pin in the hole needs to fit tightly, to stay in place. That's why getting it out of a blind hole is very difficult. You can make the pin longer than desired to give you something to grasp- to pull it out and the lock won't fit in all the way BUT it will be close enough for you to trip- to see if you like the pull. Remember the crowbar effect. I would not move the pin toward the muzzle, that lengthens the short leg. Move it up and possibly back. Every rifle is unique,
E

First try polishing the sear spring nose and sear contact area, sear nose, and also the sear bar and trigger bar contact area to a mirror finish. Then grease everything. You can also taper the sear spring lengthwise. Not the thickness. It won't affect the sparking just the release. Most of those areas are hard enough that polishing won't change the shape. You might be surprised and get enough improvement to live with it.. The end of that sear spring should have a taper on it not a square edge to grab the sear arm. Sears and springs are easily replaceable. Have at it.
Last edited: Jul 28, 2021
J

I may go to full length pin through to the sideplate side as final product, but for testing will be blind hole and long pin so reversible and completely hidden. Pin location still moving rearward and upward....its almost 1" forward of sear arm in current setup. This lock is about as tuned and polished as possible without sending back to Jim or another expert to work on perfection of the sear to tumbler contact angle (which looks pretty dang perfect to my eyes) and something better left to an expert 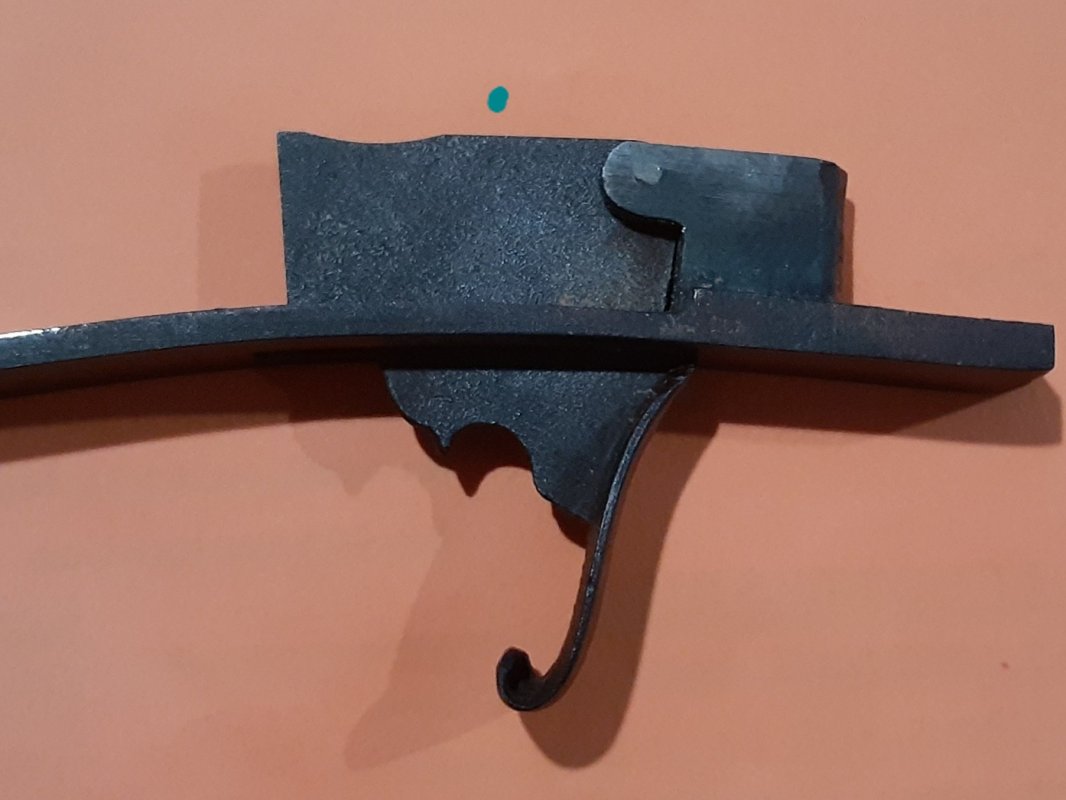 The angle doesn't change with polishing. Just the friction.
1" is a pretty long lever arm f or a trigger though. On my Harn rifle the trigger was too light. He had put the pin about 3/8" back from the sear bar. It was way too light. Almost like a set trigger. I ended up bending the sear spring to get it safe enough to use. I didn't want to do any wood work on a really expensive rifle.