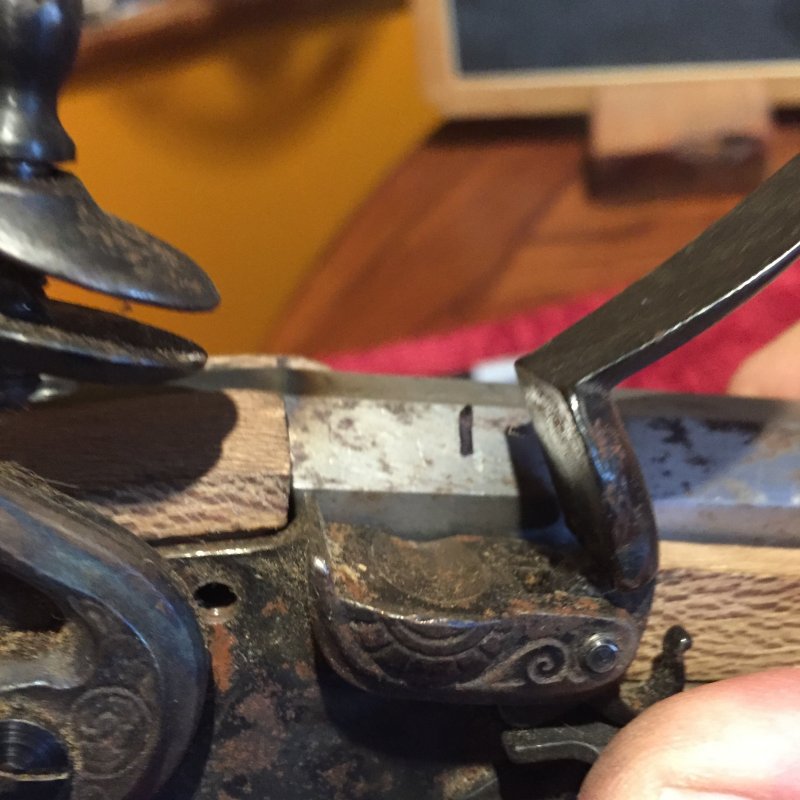 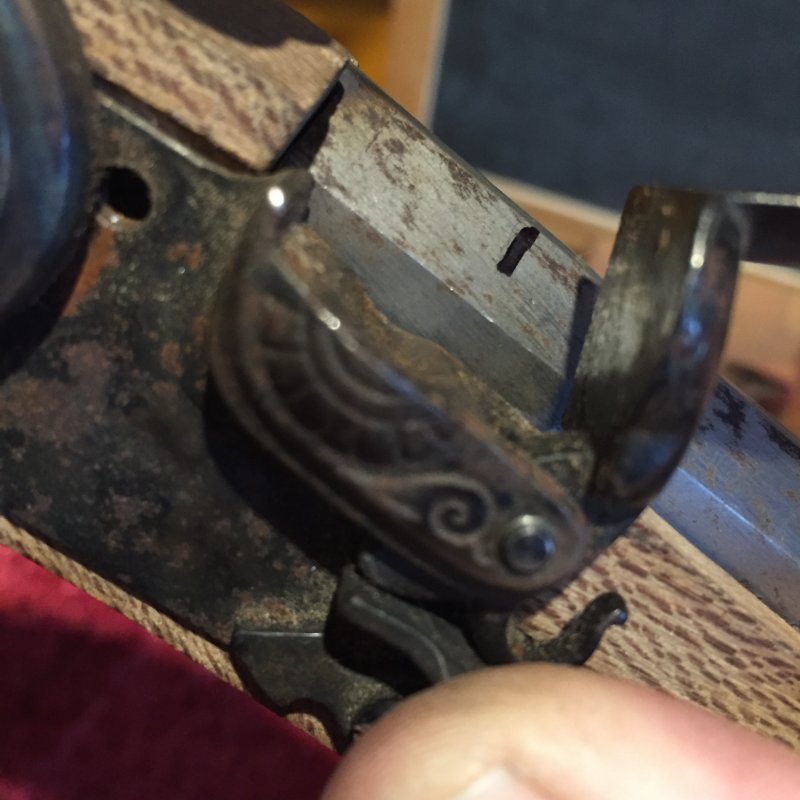 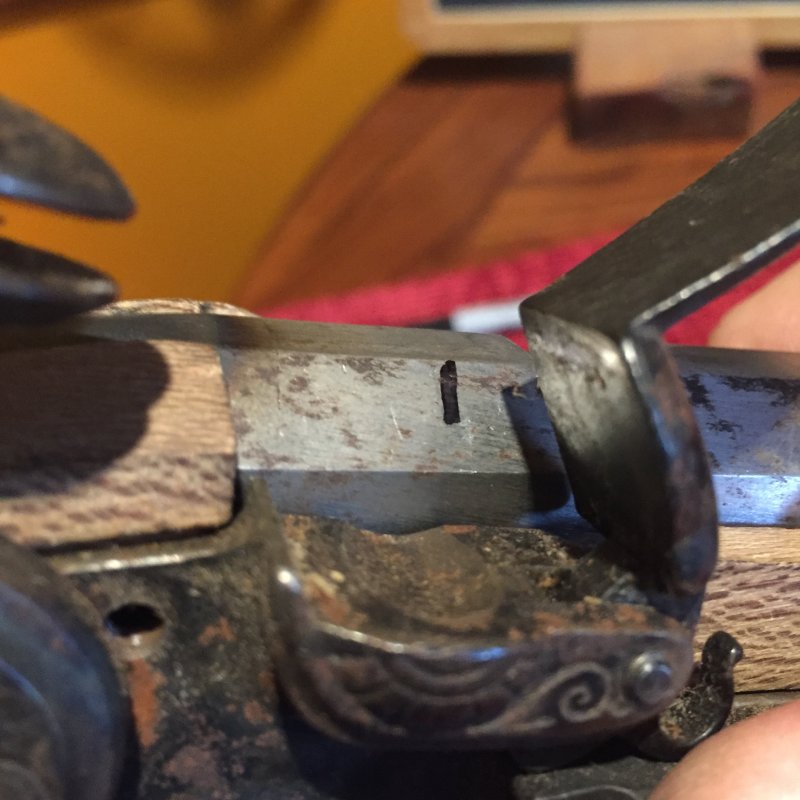 Seriously? After the other issues i’ve fixed, as i’m preparing to mark and drill the touch hole on a pretty old, cobbled CVA or DGW Colonial pistol, i realized that the pan is further to the rear of the barrel than the end of the bore.

I’m assuming the answer is to drill a slightly smaller-than-.45 deeper bore, deep enough to allow the touch hole flash to access the powder charge. Questions include

* how much further to the rear of the touch hole do i drill?

* what’s the recommended powder charge for this beast?

* how deep does my bore elongation have to be to contain that powder charge, so that the ball doesn’t contact the reduced-diameter chamber?

I hope all this is clear enough, including the photos. It’s probably a simple fix, but it’s better to ask first instead of after. Thanks!

Is it too late to set the barrel back more?

As you say, it has been cobbled up and the barrel doesn't seem to be the one that came with the gun.

If that black mark is in line with the face of the breech plug, the first thing to do is to look down the bore to see if the plug already has a smaller than bore size hole drilled into its face. If it does, get something smaller that will fit into the hole and see what the depth of it is. It might be deep enough to reach the center of the pan.
If it does exist and doesn't reach the center of the pan, try to determine what size it is. Then, get a "aircraft length" drill bit that is that size or slightly smaller. These aircraft drill bits are long enough to reach the breech plug in a pistol length barrel.
If the barrel length is short enough you might be able to use a standard length drill bit. My standard 5/16" bit measures 4 1/4" long.

Assuming the breech plug doesn't have a hole drilled into its face, you talk like you are planning to drill one in and, I agree with your plan. The biggest problem is keeping the smaller than bore size bit on center so it won't gouge the bore.
Wrapping the outside of the drill in the opposite direction than the drill rotates using some .010 thick brass sheet metal might keep the bit centered. It has to be wrapped in the opposite direction so it doesn't try to unwind when the drill bit is turning.

As for size, I think I would try a 5/16" diameter bit.
You won't be drilling much more than 3/8" deep with it so the volume of the drilled hole will be slightly more than 0.029 cubic inches.
That would be the size for 7.4 grain powder charge. You didn't say what the caliber is but if it is a .45, the powder charge should be somewhere between 15 and 30 grains so there is little chance of the ball bottoming out on the breech plug face when the gun is loaded.

Yup - waaaay too late! Plus, that would have been waaaay too simple - for this project anyway...
C

Very good, Sir. But your answer raised another question: how much, in inches, of metal do i have to leave between the breech face and the back of the barrel? I want all the fireworks (if indeed there ever are any) to come out the front, not the back.

And the breech face is just flat, like an abandoned gold mine.

How far forward of the face should the touch hole enter the bore?

Centurion said:
Very good, Sir. But your answer raised another question: how much, in inches, of metal do i have to leave between the breech face and the back of the barrel? I want all the fireworks (if indeed there ever are any) to come out the front, not the back.

You probably already know the pan on that lock needs to be made deeper?
When you work on it just make sure it is below the center of the barrel flat but it doesn't reach all the way to the edge of the flat.
You don't want priming powder trickling down into the lock mortise thru a crack.

I do not know a documented from the factory load for you. Guys on the net say 30 gr is good.
It is a pain in the butt to take off where someone left off, but here is what I would do. I am not a 100% HC person, so take it however you like. First of all I would widen the pan valley towards the muzzle as much as possible. Now if all your marks are correct, you should have about 1/8" to the face of the breech plug. I would drill the TH about a 1/16" from extended pan valley, and maybe even angle towards muzzle. I would drill just deep enough to hit the breech plug. Now pull plug and you really can see what you have. Remove some of the breech side/face to make your TH channel. This will not be an ideal situation for avoiding TH plugging, but considering your circumstances, you do not have much room to work with. No matter what way you go, IMO the breech plug needs to come out.
Good Luck
Flintlocklar
C

Yeah that pan is pretty shallow. Are you planning on using a vent liner? From your pictures, the pan looks like it's pretty high on the side flat already. As others said, drilling an "L" in and through the breech plug seems a viable solution. Our 12L14 steel barrel rifles seem to be perfectly happy with .2" of steel at the breech, and rifle pressures are decidedly more than pistol pressures. I've also heard that 8 engaged threads are plenty enough for breech plugs. More than that is unnecessary. When last I looked, a standard 1/2" plug has 10.
C

No, i didn’t know that, but thanks - i think i understand. Anybody got a closeup photo of a pan they can load here so i can get an illustration?

On a related note, i pulled out my son’s old cva kit half-stock .54 flintlock to look at its pan - the touch hole liner is gone so now i’ve got research to do to find a replacement. That pan looks a lot like the pistol so i may have to work on that one as well.

Sorry, that was an earlier response and i firgot to send it. Do that with texts all the time...
K

I did a couple of CVA/Jukar pistol in the past where I faced the same dilemma with the breech face being ahead of the plug. Neither had a "patent" style breech. It may not have been the right thing to do, but I drilled a simple touch hole at an angle so it came out just ahead of the breech plug. I currently have a second had one done that way. It might present a problem if one tried to add a touch hole liner in the future.
K 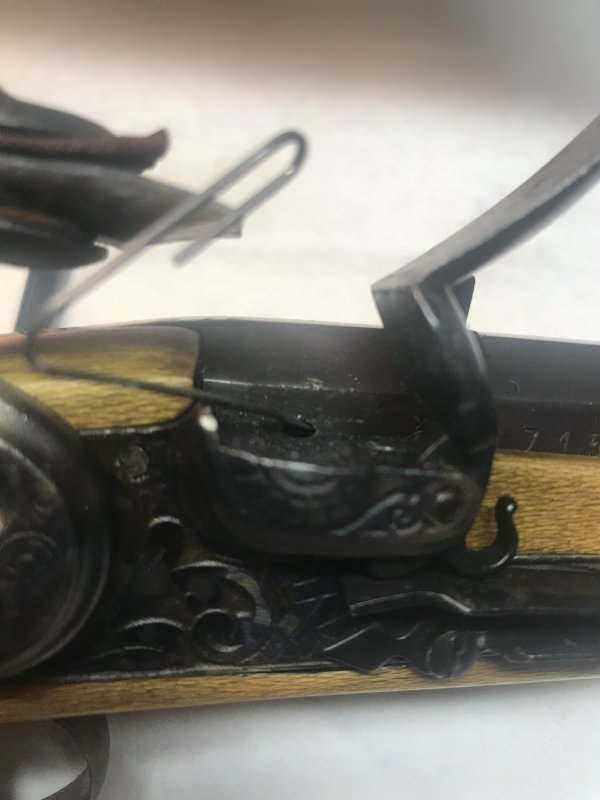 Above is a picture of the Jukar flinter mentioned above. I did not build it but by the angle of the paper clip wire you can see the angle of the touch hole. I haven’t shot this much but it seems to work okay.
C

I would think you might really get scorched by the vent jet with that one--particularly if you shot it left handed.
K

I've not had that problem, but I don't shoot it left handed either.
S

Can you remove the breech plug? If you're able to, then you can clamp it into a drill vice on a drill press, then taking an appropriately sized drill bit, drill a depression into the face of the breech plug deep enough to be able to access with the touch hole.
K

Unless you really enjoy a challenge, I would take the easier road and center the touch hole in the pan and drill at a slight forward and downward angle to the front of the side of the breech plug. I assume this was a pre-inletted kit. Not many options to change things on those without a bunch of work.

Having noted the above, you can try a bunch of stuff with this kit and are probably not out a huge amount of it doesn’t work out.

Centurion said:
No, i didn’t know that, but thanks - i think i understand. Anybody got a closeup photo of a pan they can load here so i can get an illustration?

On a related note, i pulled out my son’s old cva kit half-stock .54 flintlock to look at its pan - the touch hole liner is gone so now i’ve got research to do to find a replacement. That pan looks a lot like the pistol so i may have to work on that one as well.

Here's one of mine.

Flntlokr, that’s the best reference photo for this job i’ve seen yet, thank you

Here’s the plan... i can get a 7/16” bit into the bore with a little slop in the fit. Hone Depot has the 12” bits for $16. I’m going to wrap blue tape around the bit an inch or so from the tip and again just into the muzzle when the bit is inserted fully. Another ring of tape will serve as a depth marker. A couple of drops of oil at the bottom and the tape wraps serving as centering collars should make it a simple process to deepen the bore about 3/8” or so.

Two more questions arise: i think i should drill the touch hole first so that the bore bit will cut past it leaving a clean-edged junction without burrs or shavings. The second question is how much beyond the touch hole to drill.

And now it’s snowing and blowing and i’m
Nit sure it’s worth going out to get to Hime Depot. One more delay...
C

A little bell went off... Zonie, you said that the pan needs to be deepened, and i wasn’t aware of that. It just occurred to me that deepening the pan would allow drilling the touch hole lower, closer to the center of the flat and moving its point of entering the bore, when viewed from the muzzle, from maybe 11 o’clock to around 9 o’clock or so.... which shortens the distance from the touch hole to the charge, right?

Startin to feel like a genius, better stop before things get out of hand...