Saw this hanging in a Cracker Barrel restaurant

What am I looking at here? I’m thinking an original Leman. I’m sure someone here knows for sure. 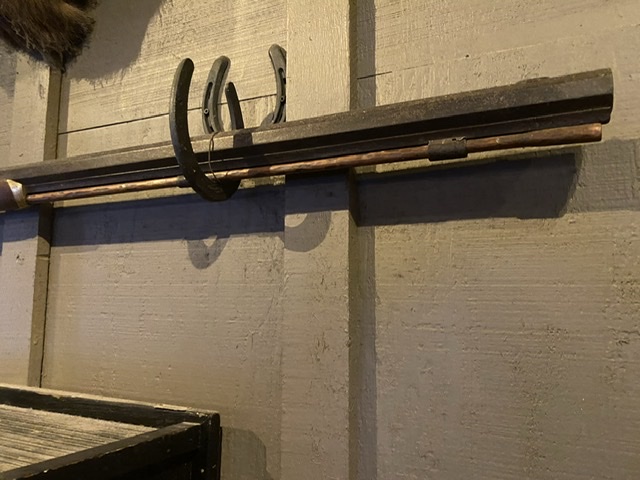 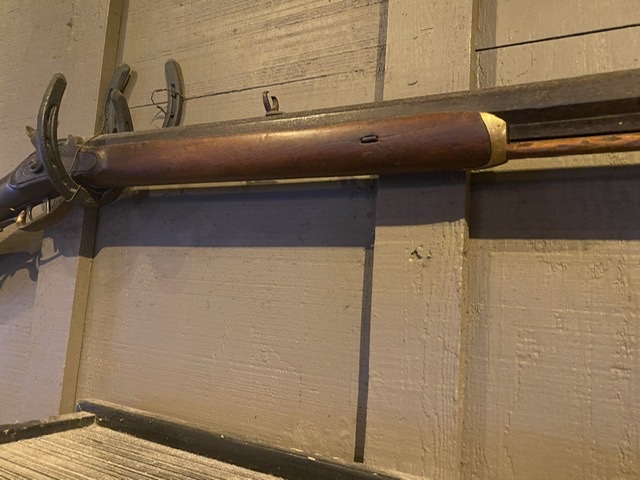 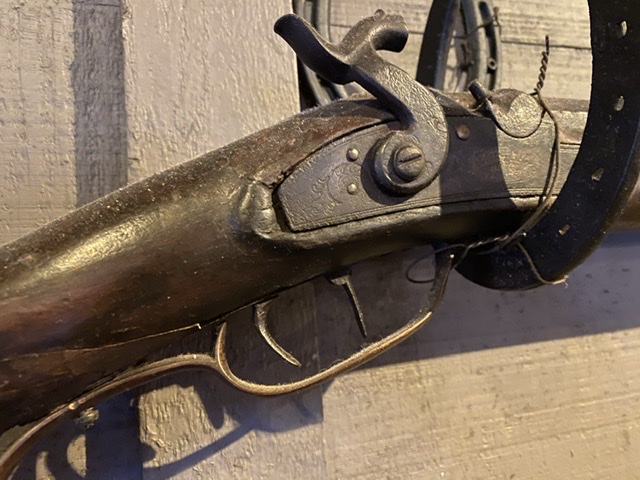 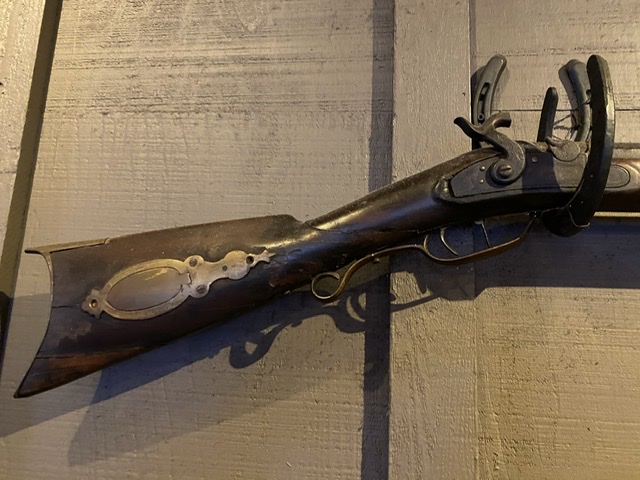 It looks like the length of pull is really short.
T

Did you offer to take it off their hands?

No, the manager wouldn’t take the wires off that holds it on the hooks......yet. I would love to handle it and inspect it more.
S

I’m surprised someone hasn’t objected to being forced to be in the same room with a firearm while eating their dinner.

You could have suggested they lower the hammer.

To me, it looks like one of the percussion J. Henry "Treaty Rifles." I'll try to post a picture when I get on the desktop computer. There is probably more to the story, but it is my understanding that these were given by the US Government to the tribes in the 1850's and 1860's as annuity payments or treaty gifts. There are a number of them out there. In my opinion, they are historically significant and interesting in their own right, but for some reason they just don't have the cachet of the St. Louis rifles.

Most of these I remember seeing had a different finial on the triggerguard. There was some individual variation, though. Many of them also had US stamped in the wood just behind the triggerguard, toward the toe. I think most of them would have had the Henry name marked on the barrel, and possibly the lock. Henry probably built rifles to a similar pattern for the civilian market, and I suppose the US stamp could be faked, but I don't think these rifles really generate that much interest on the collector market.

If you Google "j. Henry treaty rifle" you should get a bunch of hits.

Thanks for sharing these photos! If you don't mind, where is this rifle located? One would think the restaurant manager would find it worthwhile to have the rifle examined by someone who knows what he's looking at, and maybe put a little informational card or placard with the rifle, for customers to read. If that rifle were in a place near me, I'd go there and order dinner just for a chance to see the gun.

The rifle is in the Springdale Arkansas Cracker Barrel. Thanks for you input Notchy Bob

One thing that seems different than most rifles I’ve seen (which isn’t very many) is the elongated trigger guard with the Hawken style scroll on it. There is a stamp or makers mark on the lock plate that I can’t make out, but it appears to be in an oval shape.

I think it’s just cool it’s on display at the Cracker Barrel.

I’d leave it be. Adds to the atmosphere and probably pisses off some liberal.

CB,
Thanks for sharing that rifle. It is really a wonderment how the company overlooked that little historical jewel.
S

I was told there is a big warehouse full of historic props somewhere that restaurants buy or lease items like farm implements, washboards, and other stuff to display. Maybe it came from there?
R

I’d leave it be. Adds to the atmosphere and probably pisses off some liberal.

Yes, it is a cool display. Another patron saw me get up close to inspect it and he commented “that a Hawken?“ . I said that it doesn’t look like a Hawken ....well that kicked off a web search by both of us and made for some good conversation that even got the manager involved. It would be neat to be able to let them know a little history on it.

Many years ago, the was a fancy dept store in the DC area. They cleared out their props/display stuff and had one of those old shooting galleries. It had the wheels with pipes, the ducks, etc. It was a bout 20 feet from end to end. The back stop was missing, but it looked like the drive chains and sprockets were there. I foolishly went to the auction thinking the thing might sell for a few hundred dollars. I started walking away when it hit $12,000 and kept climbing. I think it was the Washington Post that reported later that it had been the property of a traveling circus that had an exhibition sharpshooter named Butler.

I grew up on a farm and dad farmed with mules into the 90s. We had all manner of horse drawn equipment and harness for them.

I took Dad to a Cracker Barrel and he saw the single trees, double trees, breast yokes, hames, collars, etc. He asked for the manager and told him he had a barn full of stuff to sell them.

The manager wrote down a phone number and told Dad to call it, it was a division of corporate that bought old stuff to fill their stores.

Dad called the number, a few weeks later a pickup with an enclosed trailer showed up and paid Dad what he considered a great price for his things.

They said if he came upon more antiques to call them.

Btw, nearly every Cracker Barrel I've been in has an old gun hanging over the Mantle. Usually a double barrel, down here in Texas.

You should see the sad replica hanging in the same place at our local cracker barrel. Aberdeen MD. area. It's not even as good as a collectors armory. Looks like one of those chinese cap guns. Why bother hanging anything over such an awesome fireplace if it's just a toy and a piece of crap toy at that?

The rifle in the original post looks a lot like one of the J. Henry & Sons "Treaty Rifles" to me, although it does have a few differences. The triggerguard finial is atypical, as is the full buckhorn sight. However, most of its general features resemble those of the "Treaty Rifles." This one is in the Wilson's Creek National Battlefield collection: 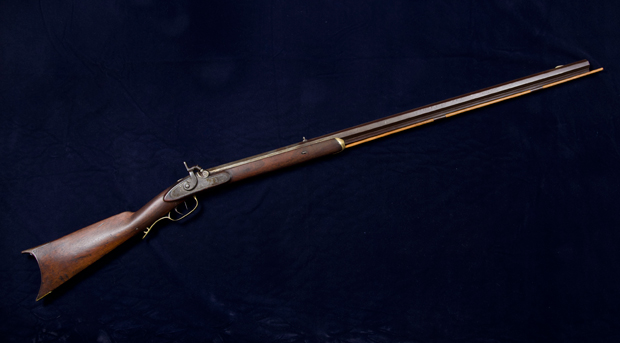 Most were in smaller calibers, .36 to about .44, based on the ones I've researched. Most seem to be mounted in brass, with some in iron. Most seem to have barrel key escutcheons, but not all. Only a few have capboxes. However, the common features seem to be a walnut halfstock with a rib under the barrel, a "snail" type bolster for the nipple, double-set triggers, and a cast pewter nosecap.

Here is a better image of a typical "Treaty Rifle," with a better view of the triggerguard:

The Leman trade rifles I'm aware of had maple stocks, a different type of grip rail or spur on the triggerguard, and usually a single trigger. The Lemans were available in larger calibers, too. I know Green River Rifle Works marketed a halfstock Leman rifle which was supposedly based on an original, but most of the Leman "Trade Rifles" you see are fullstocks.

I don't think we are exactly clear on how these J. Henry & Sons Treaty rifles were distributed. A lot of them have one or more letters, usually "US," stamped in the wood aft of the triggerguard:

It has been suggested that these were provided by the US Government to the "reservation Indians," referring to the eastern tribesmen who had been forcibly removed to the western reservations. By all accounts, the Shawnee, Delaware, and Cherokee people of the Indian Territory preferred rifles to smoothbores. This is documented in the literature even before the time of removal. Josiah Gregg referred to these people as "frontier Indians," and he and most others distinguished the native plains tribes as "wild Indians." The reservation people frequently clashed with the native tribes over hunting territory.

You also see reports of these rifles being used as treaty gifts, specifically the Fort Laramie Treaty of 1868. In that case, the rifles would have gone to the "wild Indians." The general assumption is the calibers of the treaty rifles were kept small so they would be less effective as weapons of war, but would still serve for hunting. Whatever...

These have been described as "anachronistic," being simple round-ball muzzleloaders produced in the 1850's and 1860's, at a time when much effort was being devoted to developing breechloaders. I have collected a decent reference library of my own, but just don't find a lot about these guns. Russell, Hanson, and Garavaglia & Worman all mention them, but the only really systematic study of these rifles that I have seen was by the antique dealer, Damon Mills. If you click that link, it will take you to his website. Scroll about halfway down the page and you'll find his analysis of the J. Henry & Sons Treaty Rifles. He identified three phases of production, based on features observed in a good many of these rifles. I think his research is good, and he ought to publish it.

However, after all that, I'm not convinced that the Cracker Barrel rifle is definitely a J. Henry & Sons "Treaty Rifle." It shares a lot of features with them, but it also has a few minor differences. It would be great if we could get a closer look. I would look for the J. Henry & Sons stamp on the top barrel flat and the lock, and I would check for a US or other letter stamp in the wood back of the triggerguard.

Again, thanks for showing this interesting rifle! The nearest Cracker Barrel in my area is in a community known as "the Berkeley of the South," and I don't think they have any guns displayed. I would be a more frequent customer if they did.

Cherrybow said:
The rifle is in the Springdale Arkansas Cracker Barrel. Thanks for you input Notchy Bob

Funny, well kinda sad I guess but I don't think you would see such a thing in my neck of the woods. California. Sure someone would be "offended" by a display like that. I need to move.

I have computerized about 28 Lyman photos. Photos only, sigh. None have that circular casting at rear end of trigger guard, I would tend to agree with those who think it a trade rifle built by someone other than Lyman. Just my guess.

I have these photos really to show various tack patterns,. In more lively days I was planning to build a Leman - style "Indianized" rifle from a Traditions kit. It is roughly put together but I may be too "rough" to finish it. Ask me in a year.
Last edited: Apr 19, 2021
You must log in or register to reply here.
Share:
Facebook Twitter Reddit Pinterest Tumblr WhatsApp Email Link