Recently , I started a new project .
I'm lucky to have had the muzzle piece , cut off from a worn-out Swiss Grünig&Elminger barrel in perfect mirror state in cal. 7,5mm Swiss ( .30 ) and a very short twist , which should make very well for a frontloading pistol .( The rear end was REALLY worn after several 1000 shots ... )
The rear third of the cutoff, I filed to an octagon of 21,5 mm , the front 2/3 i've turned to round on my 120 years old lathe . I cut a thread of 10X1mm and the same to the end plug , which is part of the " boxlock" - system . It's a really heavy barrel of 275mm length ! 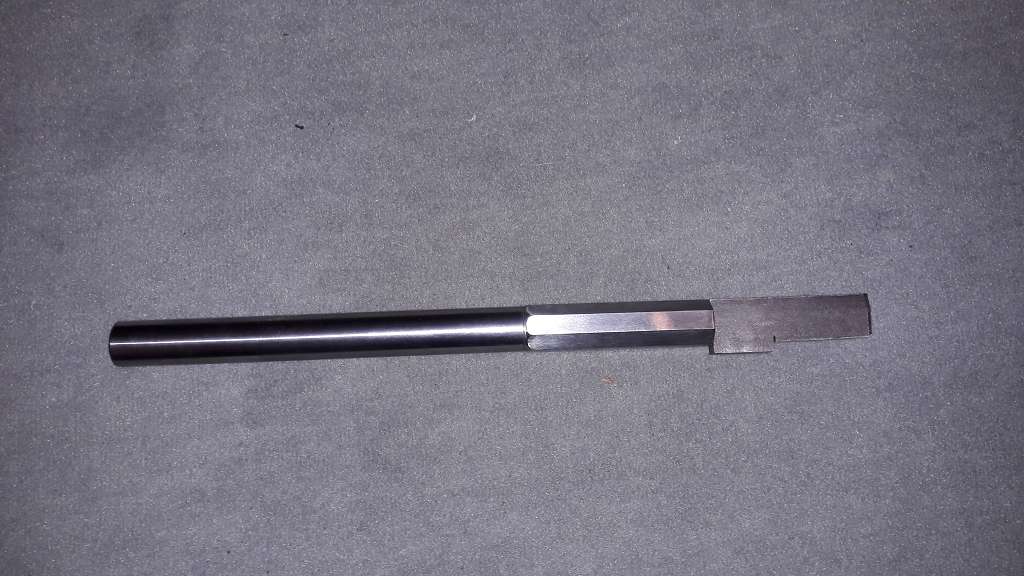 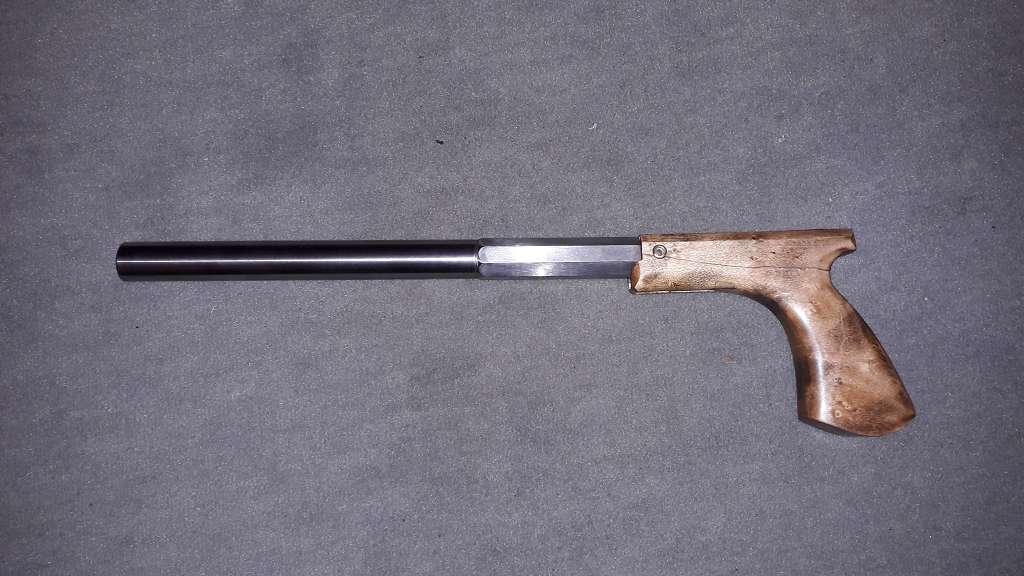 The provisional stock is only for getting an idea of the project ...Maybe , it will also have a detachable shoulder stock in the end ...

If there is an interest , I'd be glad to share the progress with You .

There is an interest. Please shar your progress. Thanks 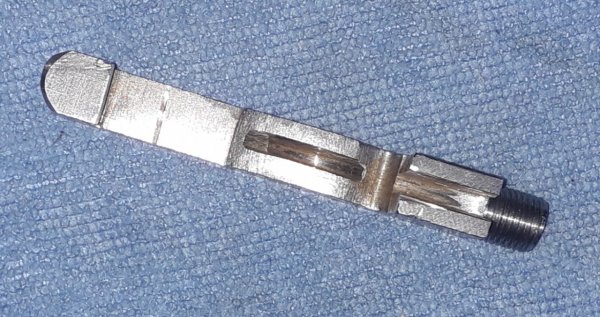 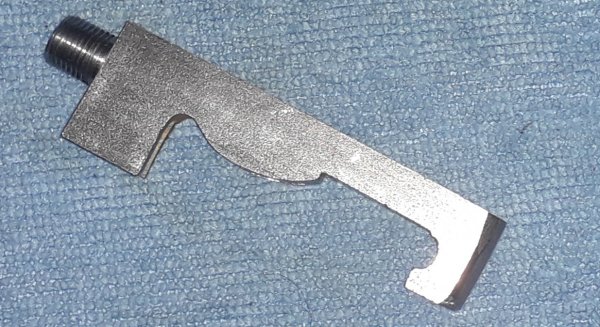 After lots of filing and dremeling , the " breechplug-system" starts to look like it should ...Material is C-45 tool steel .
F

Hi,
Please tell us where you got the design?
I really enjoy underhammer guns!
Thank you for posting.
Fred

Well - For over 40 years now , I enjoy shooting muzzle loaders , having started with a Pedersoli " Le Page " pistol .
Being an extreme precision afficionado , soon I startet to shoot vintage pistols , which are much more precise than newly built ones , as I had to learn . If there is an interest , I gladly share pictures of my collection with You .
Years ago , I was lucky enough to purchase an old , original , Ruggles pistol , and since then , I'm an absolute fan of this underhammer construction .
Most all of these pistols , which I was able to see since then , had outstandingly precice barrels of astoninglishly small calibers ( .28 - .41 but mostly in the .30 range ) which also shot extremely well , what led to the decision to try my hands on rebuilding them .
Very helpful was the book of Herschel C. Logan " Underhammer Guns " for finding samples , how these beauties have to look like .
I was also lucky to have had some old barrels from Vetterli and other vintage rifles of the 1850s on , so I started to build my own Ruggles style pistol for competition shooting , what I do since then with great success .
By the way : The Ruggles Patent of 1825 was one , if not the very first patent in the US for a percussion gun - nothing but inverting the well known boxlock of English and Belgian pocket pistols . The only thing to do was to add a slot for letting the trigger pass through the mainspring .
Only four moving parts : trigger + spring , hammer + spring ! No expences for a inletted stock , trigger guard etc , no hammer disturbing the sight line , lots of balls to be carried but sufficient for the rabbit , that was unfortunate enough to pass the settlers way ...
Easy and cheap to build and , most important , affordable for the men hunting west and in a need for a gun, who mostly were not wealthy enough to afford a mostly foreign made weapon that decided whether there was anything in the frying pan in the evening

Today , I started to file and install the hammer 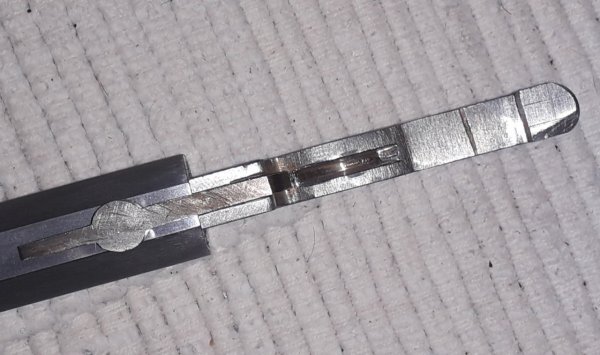 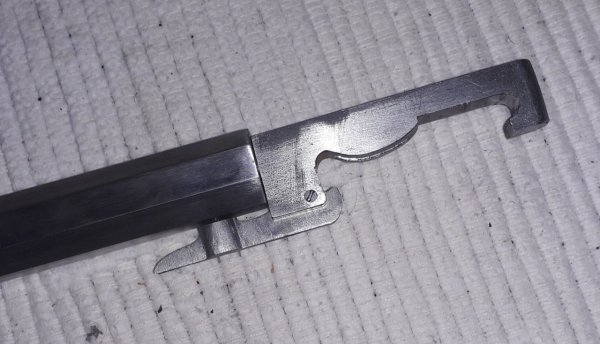 I'm very impressed with your skills. Interesting to see the step by step work you are doing. I've not handled one but you have peaked my curiosity. Thanks.

Following this thread with great interest. I have a question, Is the breech plug and the action one piece? If not, how did you do it?

As You can see , the breech plug and the system are one integral piece . The threaded plug screws directly into the barrel end and seals with its face and also with the "shoulder" , where the actual system begins .

rough shaped spring prepared . It has already a hefty pull , even before hardening it . This step follows , after all is installed , the notches in the hammer filed and adjusted . I plan to have a very short hammer fall for a pretty fast lock time . Next step is to shape the trigger , slotting the spring and installing them .

PS.: the spring is made from a cutoff of an old saw blade of 2,3mm thickness . I think , I have to taper it to the end , where it engages to the toe of the hammer

Today , I've polished the hammer , trigger and spring before I heat treated them . Before hardening , I've roughly filed the notches for safety and full cock . After having annealed all the parts , I've adjusted the trigger pull to ca. 800 gramm . Trigger spring is a coil spring . 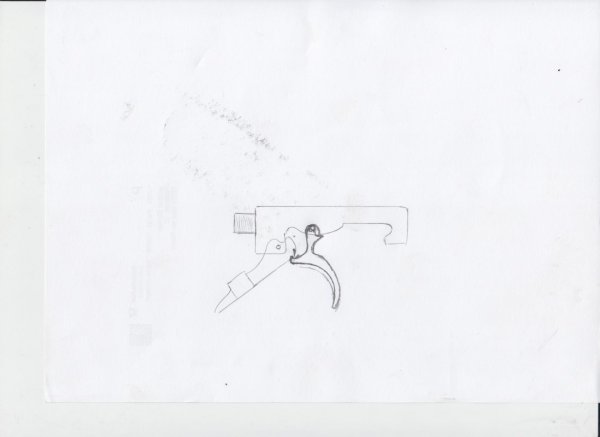 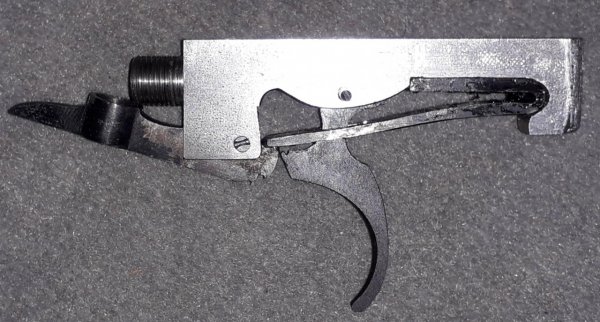 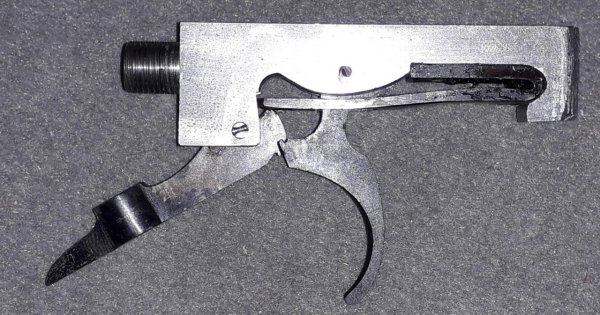 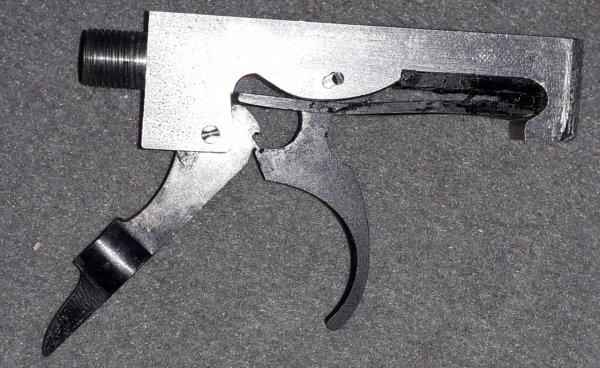 Now it seems , comes the hard part for me , creating the stock ... ( wood is not my material yet )

Today , I've finally installed the barrel with its piston , which I made from beryllium bronce .
After loading it with 6,5 gr Swiss No.1 , it went off at the first attempt ! Since the smallest rounds I have is .311 , I'm looking for pills in .290 . SO - if anyone among You should have a mould ... !

I only wish I had the intelligence, foresight, knowledge, and capability to do such a project. I envy this project very much.

The OP needs to go into business producing such one-off items as I am sure he would have a line of customers at his virtual door.

Praise always helps if something does not go as planned and I also have to improvise from time to time and want to throw the hammer through the workshop in frustration!
Last edited: Feb 27, 2020
F

enfield said:
Today , I've polished the hammer , trigger and spring before I heat treated them . Before hardening , I've roughly filed the notches for safety and full cock . After having annealed all the parts , I've adjusted the trigger pull to ca. 800 gramm . Trigger spring is a coil spring . View attachment 24825 View attachment 24824 View attachment 24823 View attachment 24822
Now it seems , comes the hard part for me , creating the stock ... ( wood is not my material yet )
Click to expand...

Hello enfield,
Could I trouble you to take a picture of your underhammer action with a ruler below or above it, for references.
Looking at the trigger pin, it seems to be floating in a slot????
I have several barrels just waiting for a new home!
Thank you for your time and effort in sharing your thoughts and design with us.
You need a nice piece of burl Turkish walnut for your fine looking pistol.
Also if you look around at yard sales, second hand stores, or pawn shops you can find and old silverware box and make a fine pistol box for your pistol.
Fred
Last edited: Feb 28, 2020
M

There was a gentleman in Nebraska, I think, that built Ruggles style UH pistols and rifles, I had 2 some time back. He did a very nice job and was reasonable. If I remember correctly his pistols, with a short starter, started around $250 including shipping.

Mark Herman said:
There was a gentleman in Nebraska, I think, that built Ruggles style UH pistols and rifles, I had 2 some time back. He did a very nice job and was reasonable. If I remember correctly his pistols, with a short starter, started around $250 including shipping.
Click to expand...

Wow - that's , what I payed for the raw barrel only ! Keep in contact with this guy , working for less than his material and even his labour !
But let me show You , how I started my stock , which I plan to make from an odd piece of maple .

The drilled holes are for the planned attachment of a shoulder stock . 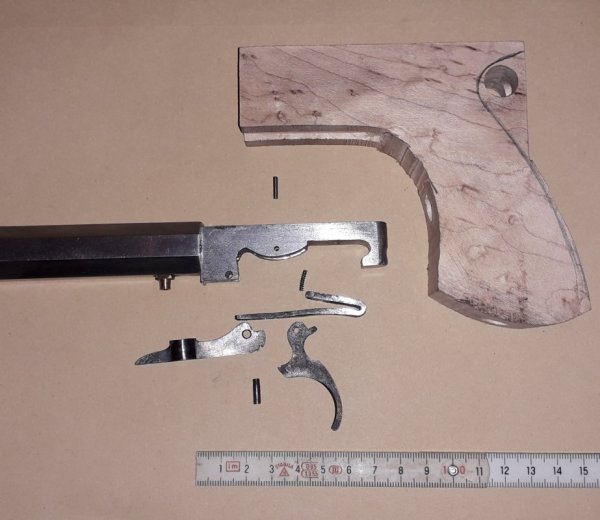 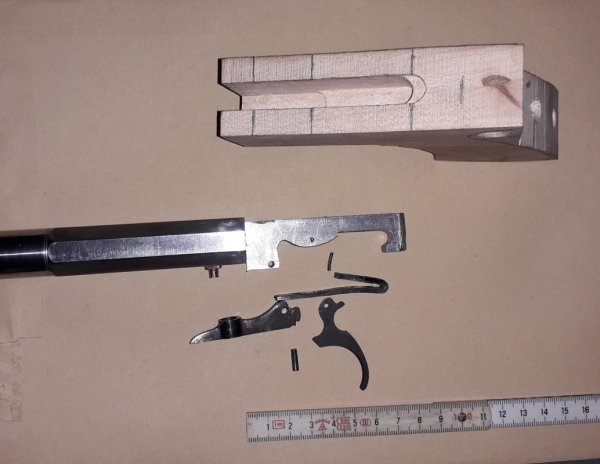