What load is recommenced for shooting a conical out of a ROA for Whitetail Deer hunting? Most everyone use a conical or stick with the rb in a ROA? Greg

When I had my ROA I got superior results with the round ball. No need to measure. Just fill to where there is still enough room for the ball.
R

Critter Getter said:
What load is recommenced for shooting a conical out of a ROA for Whitetail Deer hunting? Most everyone use a conical or stick with the rb in a ROA? Greg
Click to expand...

When I learned that the “common knowledge” of these and repros being no more powerful than a .38 Spl, and not humane, I noted that the chronographed numbers I saw showed that with a ~200 grn bullet 25 grns of 3F sporting grade powder would produce ~300-325 ft/lbs, or on par with a warm standard .44 Spl load, and what I felt was absolute minimum for use. From there I worked up in 5 grn increments and looked for my most accurate charge (with a ball and my .400” and .460” bullets). I tried up to 45 grn of T7 with a ball, but 35 grns was where I found it’s smallest consistent groups (3-3.5” offhand at 15 yds).

What I’ve learned having shot at least 7-8 different projectiles, including the ball, and found that my more accurate charge never changed (by a 5 grn increments). Since then I’ve been carefully working with both my ROA and NMA to make a bullet that fills nearly all of the excess chamber space (leaving a little room for charge variance, an over powder card if I want, and 1/16” to keep the noses from gas cutting. Since I know I’m getting very good figures at the very least (450+ ft/lbs, and quite likely more) I want to keep the superb accuracy and work around that. My 35 grn charge weighed in 3F Olde Eynsford is about 38 grns, so considering that I’m using 3F of a sporting grade powder with what I think should weigh about 230 grns, I’m not too far from the 1st neutered .45 Colt performance (35 grns of 2F? behind a 250-255 grn bullet). The excess space in both is nearly identical.

I have contemplated sacrificing a few hairs of powder capacity to ensure my bullet weighs about 240 grns, but I keep coming back to how a wide meplat cuts a bigger hole the faster it goes, and the weight alone should provide a lot of penetration regardless, but I have always preferred to lean on the heavier side in modern stuff.

When I created my 3 design I had an additional one that weighs 245 grns that I designed specifically for the Ruger (prior to learning of my accurate sweet spot) for hog hunting, but we were thinking we would be moving to VA opening up the bears for me so I created a very heavy bullet that weighs 285 grns but because of the design is barely longer than Kaido’s modified Lee 255 grn bullet of the same weight. From the info Mr Beliveau gave in his 6 part Ruger videos I saw that 25 grns of 3F would be about the max charge unless I deepened the chambers or more likely bought a ClassicBallistix cylinder. Because I reduced the powder charge to what I felt was the bare minimum I knew this bullet would be traveling a bit slow for my tastes so I increased the driving band lengths to add friction on top of the friction the mass itself lends. The Ruger can handle anything black powder (within reason). It blew up an old ASM Walker though. Loaded with 52 grns of Pyrodex P. I’m sure that had to be a heavily compressed load.

A ball is more than plenty for deer. If you look at the ballistics and compare them to what you see from a patched .45 and .50 cal ball you’ll see the similarities, and seeing that those who hunt with the patched ball are hunting quite successfully with them. If the ball is going fast enough it will expand and create a nice big wound with the ball often found on the offside of a broadside deer, if it wasn’t fast enough the ball flew through the other side creating a caliber sized hole, which isn’t small.

I prefer a bullet with a wide meplat because some things I’d hunt have claws and teeth. If one were quite skilled they could use such to 50 yds or whatever where a ball would be too twitchy in a breeze and be traveling a bit too slow for my tastes.

Traditional bullets/conicals being pointy are the absolute worst projectile as they take up a lot of capacity for their weight giving them a lower velocity which really allows the pointy tip to allow the flesh to stretch creating a much smaller wound. The Lee RN isn’t quite as blunt as a ball or traveling as fast up close, but further away I’d take the RN. But a wide meplat trumps all of those.

Some time ago Mike Beliveau (Duelist 1954) did some testing with a ROA and different projectiles. One was a bullet from Kaido Ojama (SP?) that is a real hunting bullet with a very wide meplat and did a number on the water bottles. Look it up
Respectfully
Bunk
N

Critter Getter said:
What load is recommenced for shooting a conical out of a ROA for Whitetail Deer hunting? Most everyone use a conical or stick with the rb in a ROA? Greg
Click to expand...

By any chance have you checked your chambers for ovality?
Reason I ask is that it did happen in some Old Army's and in complicates maintaining alignment on a cylindrical bullet while you're loading it. And if you think about how the ovality happens, it means the short axis of the oval is the intended chamber diameter. And maybe, in that case, a little bit bigger round ball is really the best option.
R

The modified Lee bullet is ok. I measured the Kaido 255 grn’s meplat and it’s close to .345” or about 76% meplat. BearTooth had interesting information on permanent wound channels from wider meplat bullets, which is quite interesting. My old link doesn’t work but I still had it saved so I took screen shots of the info, though the caliber, which is irrelevant, didn’t fit. 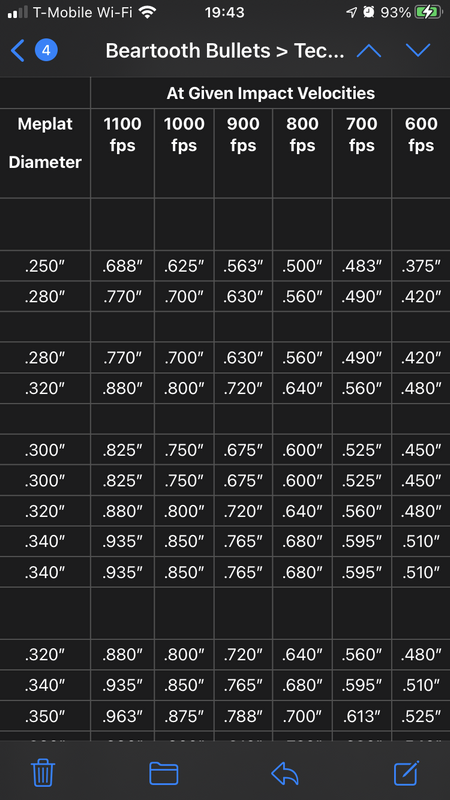 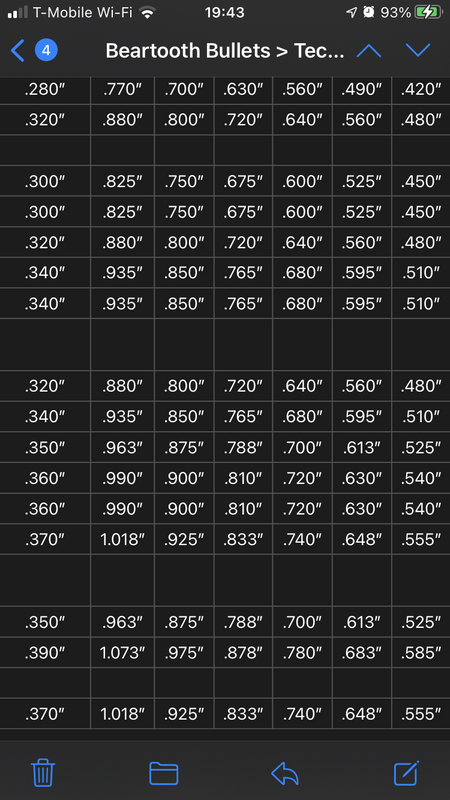 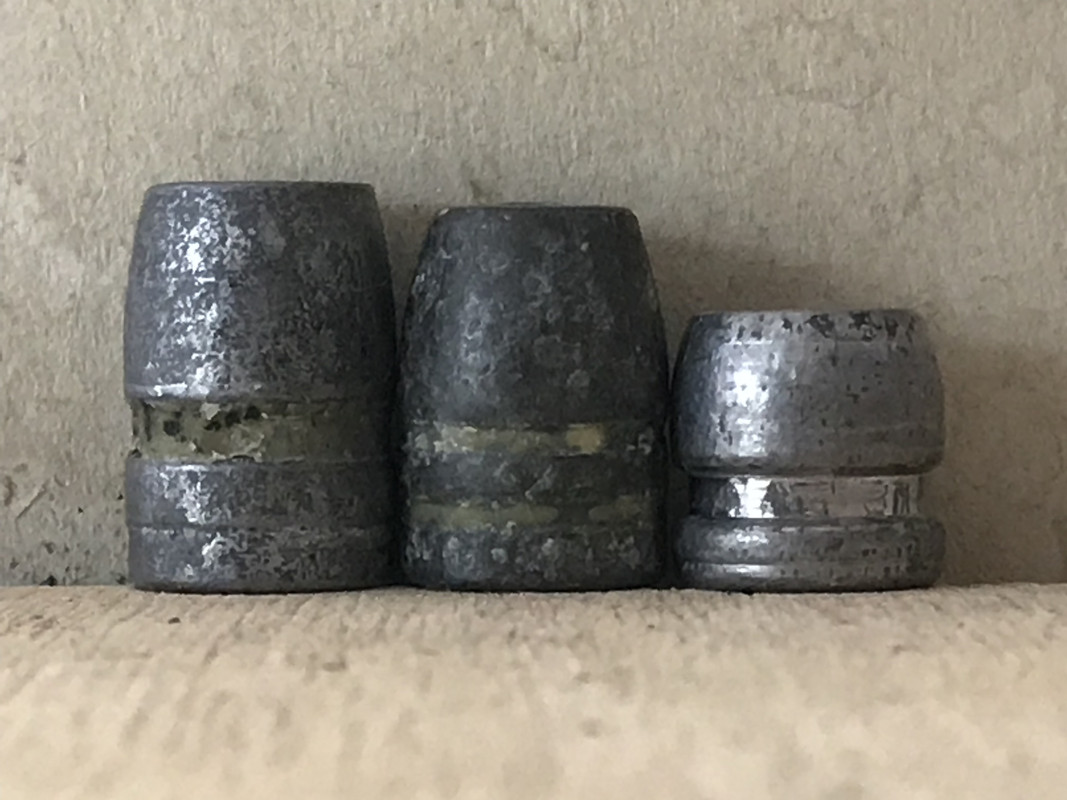