Since we were in COVID mode, I decided to re-finish my 40+ YO T\C Hawken. Originally purchased in 1980 with some light sanding and a few coats of True Oil, the gun has seen a lot of hunting under different weather conditions over the years. It's been dropped, many times, threw it across a pipeline once as I began to tumble down the muddy hill...drove mud a good 10" into the bore. I never liked the original 1-48 twist barrel as it had a very shallow rifling and after trying about 6,000 different ball\patch\powder combos, I finally settled on 60gr FF....which is enough to kill a deer....as long as the POI was the same as the POA.

About ten years ago I replaced the barrel with a Green MT drop in. Best decision I made as the rifle will now shoot a nice group....and no more "shotgun pattern." Plus the load is now 100gr FF.

Anyway the initial pics are the beginnings of the re-do. I had a set of TOTW Hawken triggers that I purchased many years ago with the intent of building a true re-pro Hawken Plains rifle. Well, that never happened so I used the TOTW double triggers and trigger plate to get rid of the T\C factory. I never liked the T\C trigger guard. I also made a toe plate, inlayed the lock bolt metal, inlayed the wedge key metal, and re-shaped the stock. I considered replacing the T\C nose cap with a more realistic one, but then decided against that. All of the T\C Brass has been dipped in a brass aging solution and the steel trigger guard was greyed using the same solution. I also removed the barrel blueing with Naval Jelly. The barrel was not to my liking as far as the smooth finish was concerned so I draw-filed it to my liking and using the brass solution, I greyed\patina the barrel.

It's not an original T\C....and it will never be a Hawken reproduction.....but it's a good hunting rifle...and IMHO, it looks nicer....and it's not like every other T\C out there. Here's the pics in (I think) order of refinish:

Nice job of it. Built my TC Hawken from a kit and never replaced any parts. The initial use was on squirrels and it was a real "head hitter". Later on used it for deer w/ Maxi Balls and got a few deer. My only complaint was that it was a cheek slapper so one year I modified the butttock and it no longer bothered my cheek. In fact used it on elk w/ a 410 gr Buffalo Bullet w/ a lot of powder and it got a couple of elk.

Found that no matter the load, the accuracy was excellent. 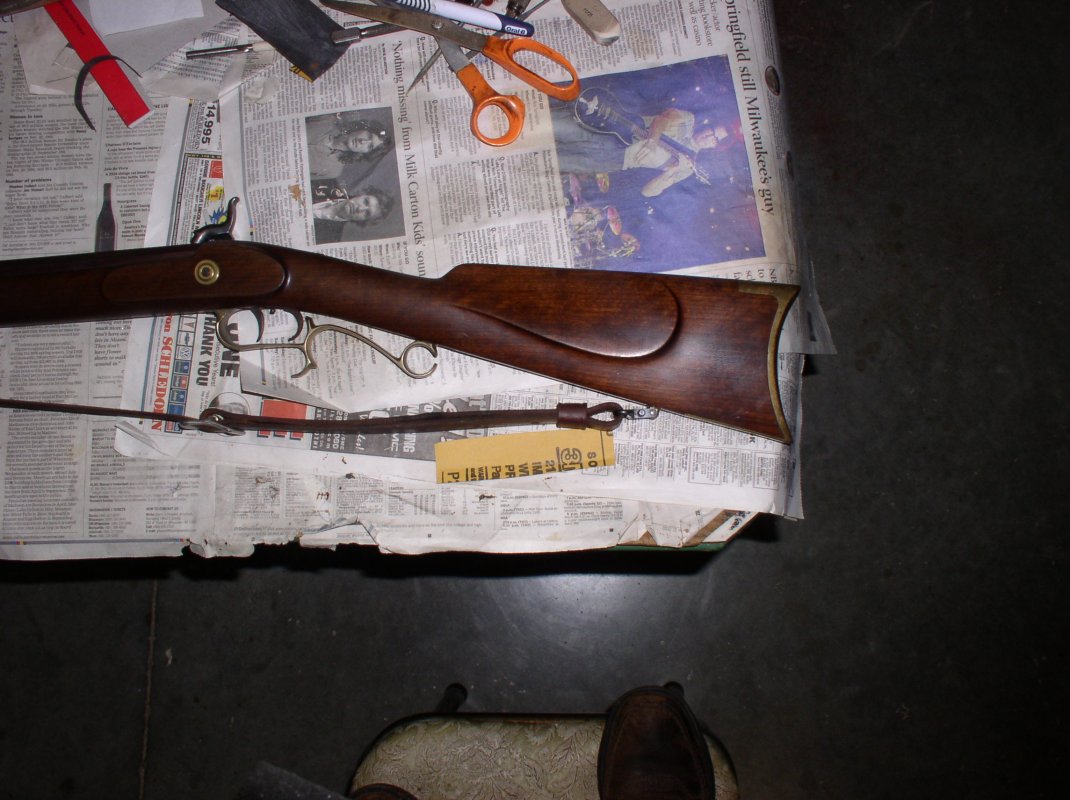 The comb was taken down and re-angled and the cheekpiece was reduced in height. The pic shows the result.....Fred
D

Fred.....I think my original barrel was cut at the end of the cutter's useful life. I know factory barrels that shoot very well.....but mine just didn't.

This is my originally early T/C Hawken. As you can see I replaced everything but the lock, trigger and tang. Went with a Green Mt. barrel, Pecatonica stock and furniture from the Hawken Shop. Probably should have gone your route as it would have saved much$$.

Very nice work, its always nice to see a well used and loved gun cleaned up and ready for move use.

If you don't mind my asking, what is your brass aging solution of choice?
D

A visit to their web site shows the small bottle $7.50 is out of stock. The small bottle is plenty enough to use on several guns. Brass...plus if you want that grey patina look it works great for that. Jim Kibler has a video on how to apply it. Essentially, you apply with a scotch pad...don't rub it off...then spray with WD-40 and then wipe the excess oil off. Comes out nice.

The brass parts must be placed in a bowl and submerged. Doesn't take long.
C

Thank you, I will have to give it a go on my next build.
B

FWIW, I have had good luck aging brass by dunking it in white vinegar then hanging the part(s) in a small, closed box with a bowl of ammonia. 2 to 4 times worked for me. Sometimes though, just using it produces the best patina..

I've had good luck in applying patina to my brass mounted rifles by rubbing the brass with a fouling soaked patch.

B
Restocking Help for T/C

If T/C Would Have Made a Northwest Trade Gun...

Probably not worth a thread